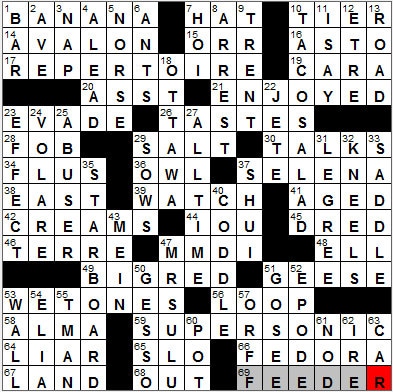 Parts of 15 answers in this puzzle are missing, in a manner for you to discover.


Today’s Wiki-est, Amazonian Googlies
7. Bit of dance attire for Fred Astaire : (TOP) HAT
As you may well know, Fred Astaire’s real name is Frederick Austerlitz. Fred was from Omaha, Nebraska and before he made it big in movies, he was one half of a celebrated music hall act with his sister, Adele. The pair were particularly successful in the UK, and Adele ended up marrying into nobility in England, taking the name Lady Charles Cavendish.

14. Toyota sedan : AVALON
The Avalon is Toyota’s top-of-the-line, full-size car produced and sold in North America today. It took over from the Cressida and has been in production since 1994. The car’s name is derived from the island mentioned in Arthurian legend.

15. Recipient of three consecutive Hart Trophies : ORR
Bobby Orr is regarded as one of the greatest hockey players who ever played the game. By the time he retired in 1978 he had undergone over a dozen knee surgeries. At 31 years of age, he concluded that he just couldn’t skate any more. Reportedly, he was even having trouble walking …

19. Opening word of many an Italian letter : CARA
“Cara mia” is the Italian for “my beloved”.

28. Key ___ : FOB
A fob is attached to another object to make access to it easier. And so a key fob is a chain attached to a key so that it can be retrieved easily. There are also watch fobs, of course.

29. With 30-Across, they started in 1969 : SALT
30. See 29-Across : TALKS
There were two rounds of Strategic Arms Limitation Talks between the US and the Soviet Union, and two resulting treaties (SALT I & SALT II). The opening round of SALT I talks were held in Helsinki as far back as 1970.

34. Some shot targets : FLUS
Influenza is an ailment that is caused by a virus. The virus is readily inactivated by the use of soap, so washing hands and surfaces is especially helpful in containing flu outbreaks.

37. One-named pop star : SELENA
Selena Quintanilla-Perez, known professionally simply as “Selena”, was murdered in 1995 by the president of her own fan club at the height of her career. In a 1997 biopic about Selena’s life, Jennifer Lopez played the title role.

39. Midnight to 4 a.m., at sea : (MIDDLE) WATCH
In the traditional watch system at sea, the crew is divided into two “teams”, often called the port and starboard watches. Each watch works for four hours, and then rests for four hours, works again for four hours, and rests etc. As there are six 4-hour periods in every day, an even number, the period from midnight to 4 a.m. (also called a watch, to confuse!) would have to be stood by the same crew members. As this is the watch that is considered undesirable to many, then a system was devised to rotate responsibilities for fairness. The “dogwatch” is the 4-hour period between 4 p.m. and 8 p.m., and it is split into two 2-hour periods, the first dogwatch and second dogwatch. This results in a compliment of seven watches in every 24-hour period, an odd number. Consequently, the team that attends a particular watch in a day, is replaced by the opposite team on the next day.

46. ___ verte (green earth pigment) : TERRE
Terre-verte is an olive-green pigment that is made from the mineral glauconite. It is used as a pigment by artists.

49. Wrigley product : BIG RED
Big Red is a cinnamon-flavored gum made by Wrigley’s since 1976.

58. Michigan college : ALMA
Alma College in Alma, Michigan was founded by Michigan Presbyterians in 1886. The school has a Scottish heritage of which it is very proud. Alma has its own Scottish marching band, a Scottish dance troupe and even its own design of tartan.

66. What Cowboy legend Tom Landry sported : FEDORA
A fedora is a lovely hat, I think. It is made of felt and is similar to a trilby, but has a broader brim. “Fedora” was a play written for Sarah Bernhardt and first performed in 1889. Bernhardt had the title role of Princess Fedora, and on stage she wore a hat similar to the modern-day fedora. The play led to the introduction of a women’s fashion accessory, the fedora hat, commonly worn by women into the beginning of the twentieth century. Men then started wearing fedoras, but only when women gave up the idea …

Although Tom Landry was a football player, he is best known as the head coach for the Dallas Cowboys. As coach he had a run of 20 consecutive winning seasons, a record that has yet to be broken. Landry had an impressive record during WWII as well. He completed a tour of 30 missions as co-pilot in a B-17 Flying Fortress in Europe, and survived a crash landing in Belgium. In his days with the Dallas Cowboys he was noted for wearing a fedora hat, and there is even an image of that famous hat on his tombstone in Texas State Cemetery. He passed away in 2000.

Down
2. Many a Monopoly property: Abbr. : AVE
The commercial game of Monopoly is supposedly a remake of “The Landlord’s Game” created in 1903 by a Quaker woman called Lizzie Phillips. Phillips used her game as a tool to explain the single tax theory of American economist Henry George. The Landlord’s Game was first produced commercially in 1924. The incredibly successful derivative game called Monopoly was introduced in 1933 by Charles Darrow, making him a very rich man when Parker Brothers bought the rights to the game just two years later in 1935.

5. Like the origin of the names for some days of the week : NORSE
Thor is the Norse god of thunder, wielding his mighty hammer. One day of the week recognized by pagans during the time of the Roman Empire was Thor’s Day, named for the Norse god. We now know it as Thursday. Thor’s mother was Frigg, and she was honored on Frigg’s Day, which we now call Friday.

6. Pantry problem : ANTS
The word “pantry” dates back to 1300, when it came into English from the Old French “panetrie” meaning a “bread room”. Bread is “pain” in French, and “panis” in Latin.

7. ___ polloi : HOI
“Hoi polloi” is a Greek term, literally meaning “the majority, the many”. In English it has come to mean “the masses” and is often used in a derogatory sense.

9. Nottingham’s river : TRENT
The River Trent in England is one of the few rivers that flows north for much of its route. The Trent rises in Staffordshire and empties into the River Ouse in Yorkshire.

Nottingham is a city in the East Midlands of England. To outsiders, perhaps Nottingham is most famous for its links to the legend of Robin Hood.

The Musée du Louvre has the distinction of being the most visited art museum in the whole world. The collection is housed in the magnificent Louvre Palace, which was the seat of power in France until 1682 when Louis XIV moved to Versailles.

22. Jump on a stage : JETE
A jeté is a leap in ballet, coming from the French word “jeter” meaning “to throw”.

24. 1958 hit that won the first-ever Grammy for Song of the Year : VOLARE
The song we know as “Volare” doesn’t actually have that name. It’s real name is “Nel blu dipinto di blu” (In the Blue Painted Blue). The Italian lyrics tell of how the singer feels like he is flying when he is with his lover (“volare” is the Italian for “to fly”). The original version has a prelude, which helps put the “blue” and the “flying” in perspective … “I think that a dream like that will never return; I painted my hands and my face blue, then was suddenly swept up by the wind and started to fly in the infinite sky.”

32. Kowtows, say : KNEELS
To kowtow is to show servile deference. “Kowtow” comes from the Chinese “k’o-t’ou” which is the name for the custom of kneeling and touching the forehead to the ground in a gesture of respect. The Chinese term literally translates as “knock the head”.

37. Feng ___ : SHUI
Feng shui is the ancient Chinese tradition of arranging objects, buildings and other structures in a manner that is said to improve the lives of the individuals living in or using the space. “Feng shui” translates as “wind-water”, a reference to the belief that positive and negative life forces ride the wind and scatter, but are retained when they encounter water.

40. Overindulge : CODDLE
The word “coddle” means to boil gently, as in “coddle an egg”. Coddle was first used to mean “treat tenderly” by Jane Austen. Quite aptly I think, she used the term in her masterpiece “Emma”. Isn’t that interesting …?

47. “Star Trek” helmsman : MR SULU
Mr. Sulu was of course played by George Takei in the original “Star Trek” series. Takei has played lots of roles over the years and is still very active in television. Did you know that he appeared in the 1963 film, “Pt-109”? Not only did Takei play the helmsman on the Starship Enterprise, he played the helmsman steering the Japanese destroyer that ran down John F. Kennedy’s motor torpedo boat.

50. Painter’s preparation : GESSO
Gesso is the Italian word for “chalk”, and gives it name to the powdered calcium carbonate that is used as a primer coat under artistic panel paintings. The gesso is mixed with a glue, and when applied to wood it acts as an absorbent surface for paint.

52. Lyric poem : EPODE
An epode is a lyric poem made up of couplets in which the first line is long, and the second line much shorter. The form was invented by the Greek poet Archilochus, and was most famously used by the Roman poet Horace.

55. No friend of the bootlegger : T-MAN
A T-man is a law-enforcement agent of the US Treasury.

“To bootleg” is make or smuggle alcoholic drinks illegally. The term arose in the late 1800s as slang for the practice of concealing a flask of liquor down the leg of a high boot.

60. What a big hand often grabs? : POT
The biggest hand at a game of poker might win the pot.

63. Brandy cocktail : (SIDE)CAR
The Sidecar is actually my favorite cocktail. It was invented around the end of WWI possibly in the Ritz Hotel in Paris. It’s a simple drink to make, and contains brandy, cointreau or triple sec, and lemon or lime juice. It’s really the Brandy version of a margarita (or vice versa).