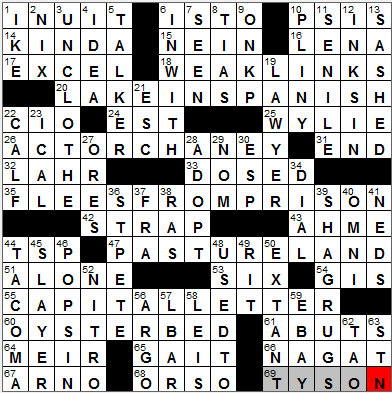 
Today’s Wiki-est, Amazonian Googlies
Across
1. Snowmen and snowwomen? : INUIT
The Inuit peoples live in the Arctic, in parts of the US, Russia, Greenland and Canada.

10. Fraternity characters : PSIS
The Greek letter psi is the one that looks a bit like a trident or a pitchfork.

22. Half of a 1955 merger, for short : CIO
The American Federation of Labor was founded in 1886, making it one of the first federations of unions in the country. Over time, the AFL became dominated by craft unions, unions representing skilled workers of particular disciplines. In the early thirties, John L. Lewis led a movement within the AFL to organize workers by industry, believing this would be more effective for the members. But the craft unions refused to budge, so Lewis set up a rival federation of unions in 1932, the Congress of Industrial Organizations. The two federations became bitter rivals for over two decades, until finally merging in 1955.

24. “Alea iacta ___”: Julius Caesar : EST
Supposedly, when Julius Caesar marched back to Rome from Gaul, as he defiantly “crossed the Rubicon” with his army he uttered the words “Alea iacta est” (“The die is cast”).

By 59 BC, Julius Caesar was a very powerful man in Rome. He had just been elected to the position of consul, the highest magistracy in the Republic. Famously, he aligned himself with two other powerful men in Rome, Pompey and Crassus, forming the First Triumvirate. At the end of his year as consul, Caesar was elected proconsul (for 5 years), and was appointed governor of three provinces north of Rome (including Gaul), with control of four legions of the army. Caesar extended the reach of Rome in the Gallic Wars, and became very popular with the people back in Rome. However the Senate, led by his erstwhile ally Pompey, feared the power that could be exercised by Caesar, so at the end of his term as proconsul they ordered him to disband his army and return to Rome. Caesar agreed to return to Rome, but not to disband his army. On 10 January 49 BC, despite all warnings he marched back into Italy by crossing the Rubicon River, along with his army, plunging Rome into Civil War. Since then, “crossing the Rubicon” has come to mean “passing the point of no return”.

25. Poet Elinor : WYLIE
Elinor Wylie was an American poet and novelist who was active in the twenties and thirties.

26. lon : ACTOR CHANEY (Lon)
Lon Chaney, Sr. played a lot of crazed-looking characters in the days of silent movies. He did much of his own make-up work, developing the grotesque appearances that became his trademark, and earning himself the nickname “the man of a thousand faces”. Most famous of all was his portrayal of “The Phantom of the Opera” in 1925.

32. “If I were king of the forest …” singer : LAHR
Bert Lahr‘s most famous role was that of the cowardly lion in “The Wizard of Oz”. Lahr had a long career in burlesque, vaudeville and on Broadway. Remember the catchphrase made famous by the cartoon character Snagglepuss, “Heavens to Murgatroyd!”? Snagglepuss stole that line from a 1944 movie called, “Meet the People” in which it was first uttered by Bert Lahr.

35. lams, say : FLEES FROM PRISON (Lams)
To be “on the lam” is to be in flight, to have escaped from prison. It is American slang that originated at the end of the 19th century. The word “lam” also means to “beat” or “thrash”, as in “lambaste”. So “on the lam” might derive from the phrase “to beat it, to scram”.

51. “In bad company,” per Ambrose Bierce : ALONE
Ambrose Bierce was, among other things, an American satirist. He wrote a satirical lexicon called “The Devil’s Dictionary” published in 1911. The book is still popular today, with an updated version released in 2009. It includes “new” definitions from Bierce that were not included in his original work.

53. Boxcar : SIX
Boxcars is a slang term for two sixes rolled on a pair of dice, particularly in the game of craps. The idea is that the twelve pips on the dice resemble a pair of boxcars on a freight train.

54. Ones getting base pay : GIS
The initials “G.I.” stand for “Government Issue” and not “General Infantry” as is often believed. GI was first used in the military to denote equipment made from Galvanized Iron, and during WWII, incoming German shells were nicknamed “GI cans”. Soon after, the term GI came to be associated with “Government Issue” and eventually became an adjective to describe anything associated with the Army.

64. “My Life” autobiographer, 1975 : MEIR
Golda Meir was known as the “Iron Lady” when she was Prime Minister of Israel, long before the term came to be associated with British Prime Minister Margaret Thatcher. Golda Meir was born Golda Mabovitch in Kiev (in modern-day Ukraine), and when she was a young girl she moved with her family to the United States and settled in Milwaukee. As a teenager she relocated to Denver where she met and married Morris Meyerson, at the age of 19. She and her husband joined a kibbutz in Palestine in 1921, when she was in her twenties. She had been active in politics in the US, and continued her political work in Palestine. She was very influential during WWII, and played a leading role in negotiations after the war leading to the setting up of the state of Israel. By the time she was called on to lead the country, she had already retired, citing exhaustion and ill health. But serve she did, and led Israel during turbulent times (e.g. the massacre at the Munich Olympics, and the Yom Kippur War). She eventually resigned in 1974, saying that was what the people wanted.

69. Cicely of “Roots” : TYSON
Cicely Tyson is an actor known for her performance in the film “Sounder”, for which she received an Oscar nomination. In the outstanding mini-series “Roots”, she played the role of Binta, Kunta Kinte’s mother back in his homeland of Gambia.

Not only did Alex Haley write the magnificent novel “Roots“, but he was also the collaborator with Malcolm X on “The Autobiography of Malcolm X”. His 1976 novel “Roots” is based on Haley’s own family history, and he claimed to be a direct descendant of the real life Kunta Kinte, the slave who was kidnapped in the The Gambia in 1767. If you remember the fabulous television adaptation of “Roots”, you might recall that Kunta Kinte was played by LeVar Burton, who later went on to play another famous role, Geordi La Forge on “Star Trek: the Next Generation”.

Down
1. Dollar coin figure before Susan B. Anthony, familiarly : IKE
The Eisenhower dollar was issued from 1971 to 1978. It commemorated the life of President Dwight D. Eisenhower who passed away in 1969. 1969 was also the year of the Apollo moon landing, so the mission insignia appears on the reverse of the coin.

2. “Ain’t gonna happen!” : NIX
The use of nix as a verb, meaning “to shoot down”, dates back to the early 1900s. Before that “nix” was just a noun meaning “nothing”. It comes from the German “nichts”, which also means “nothing”.

9. Cleaning a mess in a mess, maybe : ON KP
KP is a US military slang term, and stands for either “kitchen police” or “kitchen patrol”.

10. Roman writer who originated the phrase “with a grain of salt” : PLINY
Pliny the Elder provided a translation of an old antidote for poison:

Take two dried walnuts, two figs, and twenty leaves of rue; pound them all together, with the addition of a grain of salt; if a person takes this mixture fasting, he will be proof against all poisons for that day.

13. Like many windows : SASHED
A movable (up and down) window frame is called a sash, from the French word for a frame: “châssis”.

21. PC key : ESC
The escape key was originally used to control computer peripherals. It was a key that allowed the computer operator to stop what the peripheral was doing (cancel a print job, for example). Nowadays the escape key is used for all sorts of other things, especially in gaming programs.

29. Passeport info : NOM
In France, one will see a person’s name (nom) on his or her passport (passeport).

36. Spring break locale, casually : ST PETE
St. Petersburg, Florida is often referred to as St. Pete by locals and visitors alike. The neighboring city of St. Petersburg Beach also had its name shorted routinely, so in 1994 the residents voted to change the name officially to St. Pete Beach.

38. They may do write-ups, for short : RAS
RAs are resident assistants or resident advisers, the peer leaders found in residence halls, particularly on a college campus.

40. Big name in luxury hotels : OMNI
Omni Hotels & Resorts is headquartered in Irving, California and has properties in the US, Canada and Mexico.

44. City on Commencement Bay : TACOMA
Tacoma is a city on Puget Sound in the state of Washington. The city took its name from Mount Rainier that is nearby. Rainier used to be known as Mount Tahoma.

49. Gradually slowing, in mus. : RIT
Rit. (or sometimes ritard.) is the abbreviation for ritardando, the musical direction to slow down the tempo.

50. Still around : EXTANT
Extant … it’s not lost, it’s still in existence. “Extant” comes from the Latin “exstare”, to stand out.

56. Mythical ship with a speaking oak beam : ARGO
In Greek mythology, Jason and the Argonauts sailed on the Argo in search of the Golden Fleece. The vessel was called the “Argo” in honor of the ship’s builder, a man named Argus. Argus incorporated an oak beam into the prow of the ship that was taken from the oracle of Zeus. As it was part of the oracle, the beam had the ability to speak, and speak it did!

58. Hawaiian handouts : LEIS
“Lei” is the Hawaiian word for “garland, wreath”, although in more general terms a “lei” is any series of objects strung together as an adornment intended to be worn.

59. Where Al Yankovic bought a “Dukes of Hazzard” ashtray, in song : EBAY
“eBay” is one of Weird Al Yankovic’s parody songs. This one is a parody of “I Want It That Way” by the Backstreet Boys.

62. “The way” : TAO
The Chinese character “tao” translates as “path”, but the concept of Tao signifies the true nature of the world.