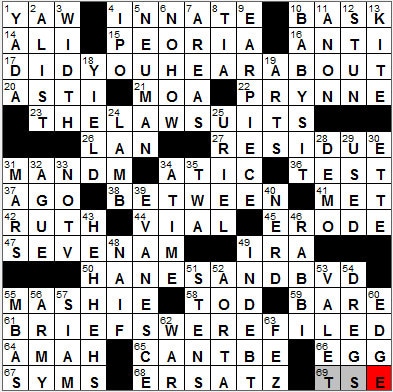 
Today’s Wiki-est, Amazonian Googlies
Across
10. Enjoy a pleasant situation : BASK
Our word “bask” has a gruesome etymology. It comes from the Old English “basken” meaning “to wallow in blood”. But then William Shakespeare used the word “bask” in his play “As You Like It” (about 1600) in reference to sunshine, and we’ve been basking in warmth ever since.

14. Foreman fighter : ALI
The Rumble in the Jungle was that celebrated fight between Muhammad Ali and George Foreman, broadcast from Zaire (now the Democratic Republic of the Congo). The fight was set in Zaire because of financial arrangements between promoter Don King and Zaire’s President Mobuto Seko. Ali coined the term “Rope-a-dope” to describe his incredibly successful strategy in the contest. From the second round onwards, Ali adopted a protected stance on the ropes, letting Foreman pound him with blows to the body and head, using his arms to dissipate the power of the punches. He kept this up until the eighth round and then opened up and downed the exhausted Foreman with a left-right combination. I hate boxing, but I have to say, that was an fascinating fight.

15. Symbol of Middle America : PEORIA
The phrase, “Will it play in Peoria?” is used to mean, “Will it appeal to the mainstream?” It is believed the expression originated as a corruption of, “We shall play in Peoria”, a line used by some actors in the 1890 novel “Five Hundred Dollars” by Horatio Alger, Jr.

20. Wine region of Italy : ASTI
Asti is in the Piedmont region of northwestern Italy. It is perhaps most famous for its Asti Spumante sparkling white wine.

21. Extinct kin of the kiwi : MOA
Moas were flightless birds native to New Zealand that are now extinct. The fate of the Moa is a great example of the detrimental effect that humans can have on animal populations. The Maoris arrived in New Zealand about 1300 AD, upsetting the balance of the ecosystem. The Moa were hunted to extinction within 200 years, which had the knock-on effect of killing off the Haast’s Eagle, the Moa’s only predator prior to the arrival of man.

26. PC linkup : LAN
You may have a Local Area Network (LAN) in your house. If you’ve got a PC and a router or switch, likely attached to some modem, then you have a LAN.

31. Popular bit of candy : M AND M
Forrest Mars, Sr. was the founder of the Mars Company. He invented the Mars Bar while living over in England, and then developed M&M’s when he returned to the US. He came up with the idea for M&M’s when he saw soldiers in the Spanish Civil War eating chocolate pellets. Those pellets had a hard shell of tempered chocolate on the outside to prevent them from melting. Mars got some of the funding to develop the M&M from William Murrie, the son of the president of Hershey’s Chocolate. It is the “M” and “M” from “Mars” and “Murrie” which gives the name to the candy.

42. Gordon of “Harold and Maude” : RUTH
Ruth Gordon was an actress who had a long on-screen career. She worked in the silent era, but started to get more important roles in the age of talkies. One of her early appearances was as Mary Todd Lincoln in “Abe Lincoln in Illinois” (1940). She is perhaps best known these days for more recent roles. She won a Best Supporting Actress Oscar for her part in “Rosemary’s Baby”, and was also nominated for an Oscar for playing the female title role in “Harold and Maude”.

49. Good name for an investor? : IRA
I have to tell you, when I first came to the US from Ireland, it was pretty confusing seeing big signs along the freeway advocating IRA contributions. Back in Ireland, that was pretty illegal (where IRA stands for the outlawed Irish Republican Army!).

The men’s underwear known as BVDs are made by the Bradley, Voorhees & Day. The company was started in 1876 to make bustles for women, and is named for its founders.

55. Five iron : MASHIE
Most of the irons in a golf bag had non-numerical names in days gone by:

58. Browning who directed “Dracula,” 1931 : TOD
Tod Browning was an actor, director and screenwriter noted for his collaborations with Lon Chaney. His most famous work as a director is “Dracula” from 1931, starring Béla Lugosi in the title role.

64. Eastern nanny : AMAH
“Amah” is an interesting word in that we associate it so much with Asian culture and yet it actually comes from the Portuguese “ama” meaning “nurse”. Ama was imported into English in the days of the British Raj in India when a wet-nurse became known as an “amah”.

67. Sylvia who played the Queen Mother in “The Queen” : SYMS
Sylvia Syms is a very versatile actress from London, England. She was a big star way back in the fifties, and is still going strong today. She co-starred in the great 2006 film “The Queen”, in which she played Queen Elizabeth, the Queen Mother.

68. Fake : ERSATZ
Something described as “ersatz” is a copy, and usually not a good one. “Ersatz” comes from the German verb “ersetzen” meaning “to replace”.

69. Literary inits. : TSE
T. S. Eliot was born in New England but grew up in St. Louis, Missouri. Much of his college education was at Oxford, and clearly he became comfortable with life on the other side of the Atlantic. In 1927 he became a British citizen, and lived the rest of his life in the UK.

Down
1. When tripled, et cetera : YADA
“The Yada Yada Yada” is actually the name of the 153rd episode of “Seinfeld”. Before “Seinfeld” made “yada yada yada” famous, we were more likely to hear the phrase “yadda yadda”, often used by comedian Lenny Bruce for example.

4. Wall St. debut : IPO
An Initial Public Offering (IPO) is the very first offer of stock for sale by a company on the open market. In other words it marks the first time that a company is traded on a public exchange. Companies have a IPO to raise capital to expand (usually). Anyone owning stock in the company prior to the IPO can find that after the IPO that stock is now worth something on the market (as opposed to just on paper), and can become quite wealthy overnight.

5. Mad face? : NEUMAN
Alfred E. Neuman is the mascot of “Mad” magazine, although the image of the smiling, jug-eared youth had been around for decades before the magazine. “Mad” first used the likeness in 1955, and young Mr. Neuman has appeared on the cover of almost every issue since then. Neuman’s name was inspired by American composer Alfred Newman, a prolific writer of film scores.

8. Aunt, in Acapulco : TIA
The Mexican city of Acapulco is on the southwest coast of the country, in the state of Guerrero. The name “Acapulco” translates from the local language into “at the big reeds”.

9. Standard-issue item for a Secret Service agent : EARPIECE
The Secret Service was created by President Abraham Lincoln in 1865, with the mission of fighting currency counterfeiters. The additional task of protecting the US President was added by Congress in 1902, following the assassination of President William McKinley in the prior year. Only one Secret Service agent has given his life in the course of an assassination attempt. That was Private Leslie Coffelt, who was killed when two Puerto Rican nationalists tried to assassinate President Harry S. Truman in 1950 while he was residing in Blair House.

11. Soon : ANON
“Anon” originally meant “at once” and evolved into today’s meaning of “soon”, apparently just because the word was misused over time.

19. The second “A” of A.M.P.A.S. : ARTS
The Academy of Motion Picture Arts and Sciences (AMPAS) is the organization that gives the annual Academy Awards also known as the “Oscars”. The root of the name “Oscar” is hotly debated, but what is agreed is that the award was officially named “Oscar” in 1939.

34. Grisham’s “___ to Kill” : A TIME
“A Time to Kill” is an excellent thriller written by John Grisham, adapted for the big screen using the same title, and starring Sandra Bullock and Matthew McConaughy. This was Grisham’s first novel, and it was rejected by many publishers and in the end was only given a print run of 5,000 copies by Wynwood Press. Then Grisham made it big with a succession of great novels, namely “The Firm”, “The Pelican Brief” and “The Client”, so Doubleday republished “A Time to Kill” and it became a bestseller.

35. Pan Am rival : TWA
Trans World Airlines (TWA) was a big carrier in the US, but was perhaps even more recognized for its extensive presence in Europe and the Middle East. For many years, especially after the collapse of Pan-Am, TWA was considered the unofficial flag carrier for the US. The company started in 1930, the product of a forced merger of Transcontinental Air Transport and Western Air Express. The Transcontinental and Western Air that resulted (the original meaning of the acronym TWA) was what the Postmaster General wanted, a bigger airline to which the Postal Service could award airmail contracts.

Pan Am started out as a mail and passenger service between Key West, Florida and Havana, Cuba in 1927. From very early in the company’s life, Pan Am was the de facto representative air carrier of the United States. For many years Pan Am’s fleet was built around the Boeing 314 Clipper, a long-range flying boat that was one of the largest aircraft around at the time. Pan Am adopted the Clipper as part of its image, even using “clipper” as the call sign for its flights.

39. Gradually disappear : EVANESCE
To evanesce is to disappear, like a vapor.

48. One who’s easily duped : NAIF
A naïf is someone who is naive, as “naïf” is the French word for “naive”.

63. Moroccan topper : FEZ
“Fez” is the name given to the red cylindrical hat worn mainly in North Africa, and by Shriners here in the US. It used to be very popular right across the Ottoman Empire. The etymology of “fez” is unclear, although it might have something to do with the Moroccan city named Fez.