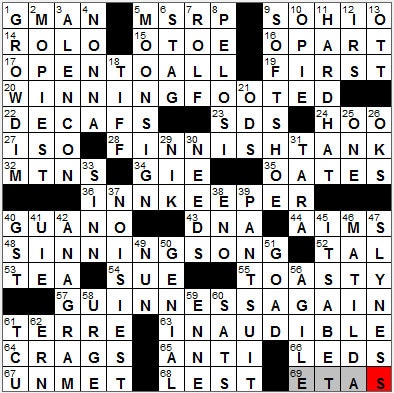 CROSSWORD SETTER: Paula Gamache
THEME: INNKEEPER … all of the theme answers are common terms or expressions, with the word INN inserted inside:


Today’s Wiki-est, Amazonian Googlies
Across
1. Sting figure : G-MAN
The nickname “G-men” is short for “Government Men”, and refers to agents of the Federal Bureau of Investigation.

9. Old Buckeye State service station name : SOHIO
Standard Oil of Ohio was formed in 1911, and was one of the companies that resulted from the break up of John D. Rockefeller’s behemoth Standard Oil. The company used the brand name “Sohio” at service stations within Ohio, and “Boron” in other states. Sohio merged with BP in 1968.

14. Chewy candy treat : ROLO
Rolo was a hugely popular chocolate candy in Ireland when I was growing up. It was developed in the thirties in the UK, and is made under license in the US by Hershey. I was a little disappointed when I had my first taste of the American version as the center is very hard and chewy, whereas the recipe used on the other side of the Atlantic calls for a soft, gooey center.

15. Old buffalo hunters of the Great Plains : OTOE
The Otoe were the first Native American tribe encountered in the West by Lewis and Clark. The explorers met with the Otoe (and Missouria) tribes in 1804 at a spot that became known as Council Bluff. The site is now a National Historic Landmark called Fort Atkinson, Nebraska as a fort was built there on Lewis’s recommendation.

22. Late-night beverages : DECAFS
The first successful process for removing caffeine from coffee involved steaming the beans in salt water, and then extracting the caffeine using the solvent benzene, a potent carcinogen. Coffee processed this way was sold as Sanka here in the US. There are other processes used these days, and let’s hope they are safer …

23. 1960s teach-in grp. : SDS
Students for a Democratic Society (SDS) was a activist group in the sixties. The SDS organized the largest student strike in the history of the United States on 26 April 1968, with about a million students staying away from class that day.

28. Helsinki hoosegow? : FINNISH TANK (from “fish tank”)
“Hoosegow” is a slang term for “jail”. It is a mispronunciation of the Mexican-Spanish word “juzgao” meaning “court” or “tribunal”.

32. Himalayas, e.g.: Abbr. : MTNS
The magnificent Himalaya range of mountains in Asia takes its name from the Sanskrit for “abode of snow”. Geographically, the Himalayas separate the Indian subcontinent from the Tibetan Plateau to the north.

34. “___ me my Highland lassie, O”: Burns : GIE
The Scottish poet Robert Burns was very much in love with a young lady called Mary Campbell. He dedicated three poems to her: “The Highland Lassie O”, “Highland Mary” and “To Mary in Heaven”.

35. Pulitzer nominee for the novels “Black Water” and “Blonde” : OATES
Joyce Carol Oates is a remarkable writer, not just for the quality of her work (her 1969 novel “them” won a National Book Award, for example) but also for how prolific is her output. She published her first book in 1963 and since then has published over fifty novels as well as many other written works.

40. Bat cave deposit : GUANO
Guano is the droppings of seabirds, bats and seals. It is prized as fertilizer as it doesn’t really smell, and contains high levels of phosphorous and nitrogen. The word “guano” means “sea bird droppings” in the Quichua language spoken in the Andes region of South America.

43. It’s part of the gene pool : DNA
I’ve always been fascinated by the fact that the DNA of living things is so very similar across different species. Human DNA is almost exactly the same for every individual (to the degree of 99.9%). However, those small differences are sufficient to distinguish one individual from another, and to determine if individuals are close family relations.

48. Call of a siren? : SINNING SONG (from “sing-song”)
In Greek mythology, the Sirens were seductive bird-women who lured men to their deaths with their song. When Odysseus sailed closed to the island home of the Sirens he wanted to hear their voices, but safely. He had his men plug their ears with beeswax and then ordered them to tie him to the mast and not to free him until they were safe. On hearing their song he begged to be let loose, but the soldiers just tightened his bonds and sailed away to safety.

52. Chess champion Mikhail : TAL
Mikhail Tal was truly a chess legend. He holds the record for the longest unbeaten streak in competition chess. And the second longest winning streak, well, that was by Tal as well.

57. Jaded ale drinker’s question? : GUINNESS AGAIN? (from “guess again”)
Guinness is the most popular beer sold in Ireland. It has that famous creamy white head, a result of mixing the beer with nitrogen as it is poured. You can also buy Guinness that has no nitrogen, which is sold under the name Guinness Export. This carbonated version of the beer has a very different taste, and is my personal favorite.

61. Pied-à-___ : TERRE
A “pied-à-terre” is a secondary living space or temporary accommodation, often somewhere to live in a big city that is some distance away from a primary residence. “Pied-à-terre” is French for “foot on the ground”.

66. Some readouts, briefly : LEDS
A Light Emitting Diode (LED) is a specialized form of semiconductor that when switched on releases photons (light). LEDs are getting more and more popular and have moved from use in electronic equipment to use as a replacement for the much less efficient tungsten light bulb. I replaced many of my tungsten Xmas lights last year and saved a lot on my electricity bill. I am definitely replacing the rest this coming Christmas.

Down
3. French city associated with lace : ALENCON
Alençon is a commune in Normandy in northern France. In the 17th century it was renowned for lace production, lace that went by the name of “point d’Alençon”.

4. Gianni’s grandmother : NONNA
“Nonna” is the Italian for “grandmother”.

5. Lesser-known astrology symbol : MOON SIGN
In the world of astrology, the sun sign is said to govern one’s individuality and the moon sign governs one’s personality.

6. Missing women? : STAG
Back where I come from, bachelor parties are called stag parties, and bachelorette parties are hen parties. And in Ireland the fairer sex usually isn’t welcome at a stag party, not even for entertainment purposes. We tend to focus on the drink …

8. Longtime Democratic House leader : PELOSI
Nancy Pelosi is a former Speaker of the House, the 60th person to hold that position. Ms. Pelosi represents a district not far from here, which covers most of San Francisco. She is the first Californian, the first Italian-American and the first woman to be Speaker of the House. As Speaker, she was also second in line, after the Vice President, to take over if President Obama could not finish his term. That made Nancy Pelosi the highest-ranking female politician in US history.

9. Tapless tap-dancing : SOFT SHOE
“Soft shoe” is a type of tap-dancing, without metal taps on the heels and toes of the shoes. Makes sense …

10. Mayberry moppet : OPIE
Ron Howard sure has come a long way since playing Opie on “The Andy Griffith Show”. He has directed some fabulous movies, including favorites of mine like “Apollo 13”, “A Beautiful Mind” and “The Da Vinci Code”. And today, Opie is a grandfather …

12. Org. with auditors : IRS
The Internal Revenue Service (IRS) came into being during the Civil War, to raise money to cover war expenses. Prior to the introduction of income tax in 1862, the government was funded by levies on trade and property.

31. Home in a Mitchell novel : TARA
Rhett Butler hung out with Scarlett O’Hara at the Tara plantation in Margaret Mitchell’s “Gone with the Wind“. In the book, Tara was founded by Scarlett’s father, Irish immigrant Gerald O’Hara. He named his new abode after the Hill of Tara back in his home country, the ancient seat of the High King of Ireland.

33. ___ Fein : SINN
Sinn Féin is a political party in Ireland, largely representing the Catholic community in Northern Ireland. It is led by Gerry Adams, and has the aim of uniting Ireland north and south. Sinn Féin is Irish for “we ourselves”.

38. Music producer Brian : ENO
Brian Eno started out his musical career with Roxy Music. However, his most oft-played composition (by far!) is Microsoft’s “start-up jingle”, the 6-second sound you hear when the Windows operating system is booting up.

Harry Belafonte is known as the “King of Calypso” as he was credited with popularizing Caribbean music in the fifties. He was born in Harlem, New York, the son of a mother of Jamaican descent and a father from Martinique.

49. Many a rosary carrier : NUN
The Rosary is a set of prayer beads used in the Roman Catholic tradition. The name “Rosary” comes from the Latin “rosarium”, the word for a “rose garden” or a “garland of roses”. The term is used figuratively, in the sense of a “garden of prayers”.

60. They’re taken in high sch. : SATS
Today the standardized test for admission to colleges is known as the SAT Reasoning Test, but it used to be called the Scholastic Aptitude Test and Scholastic Assessment Test, which led to the acronym SAT.

61. Home of the Horned Frogs: Abbr. : TCU
The athletic teams of Texas Christian University go by the name TCU Horned Frogs. The Texas horned lizard is known colloquially as the “horned frog”.