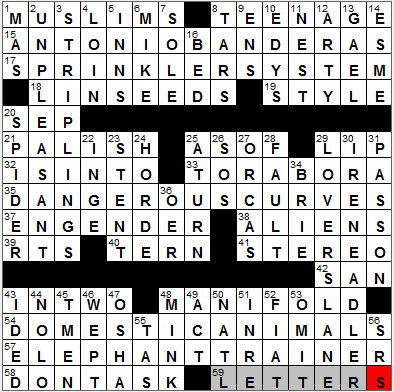 
Today’s Wiki-est, Amazonian Googlies
1. Eaters of halal food : MUSLIMS
“Halal” is a term for an action or object that is permissible under Islamic Law. In particular it can be used to describe food that can be consumed. Anything that is not allowed is called “haraam”.

15. Star of 2011’s “Puss in Boots” : ANTONIO BANDERAS
Antonio Banderas is an actor from Málaga in Andalusia on the southern coast of Spain. Banderas’s breakthrough role in Hollywood was the gay lover of the Tom Hanks character in 1993’s “Philadelphia”. He is married to the actress Melanie Griffith whom he met in 1995 while filming “Two Much”.

The 2011 computer-animated film “Puss in Boots” is a prequel. The main character is one that first appeared in the movie “Shrek 2”. Puss in Boots is voiced by Spanish actor Antonio Banderas.

18. Oil sources for oil paint : LINSEEDS
Linseed oil is also known as flaxseed oil, as the oil is extracted from the dried seeds of the flax plant.

33. Onetime Taliban stronghold : TORA BORA
The famous cave that almost certainly housed Osama Bin Laden for a while was in Tora Bora in eastern Pakistan. Tora Bora is not far (~30mi) from what used to be an even more famous spot, the Khyber Pass. “Tora Bora” translates to “black dust” from the Pashto language.

38. Hit film directed by James Cameron : ALIENS
“Aliens” is a 1986 sequel to the very successful science-fiction movie “Alien” released in 1979. “Aliens” was filmed at Pinewood Studios in England, and at the decommissioned Acton Lane Power Station in London.

39. Football linemen: Abbr. : RTS
In American football, linemen specialize in playing in the line of scrimmage. RT stands for Right Tackle. That’s about all I know, and even that I am unsure about …

40. Arctic or Antarctic fish-eater : TERN
Terns are seabirds that are found all over the world. The Arctic Tern makes a very long-distance migration. One Arctic Tern that was tagged as a chick in Great Britain in the summer of 1982, was spotted in Melbourne, Australia just three months later. The bird had traveled over 14,000 miles in that time, an average of about 150 miles a day. Remarkable …

41. It has left and right channels : STEREO
Monophonic sound (“mono”) is sound reproduced using just one audio channel, which is usually played out of just one speaker. Stereophonic sound is reproduced using two audio channels, with the sound from each channel played out of two different speakers. The pair of stereo speakers are usually positioned apart from each other so that sound appears to come from between the two. Quadraphonic sound (4.0 surround sound) uses four audio channels with the sound played back through four speakers often positioned at the corners of the room in which one is listening.

48. Car exhaust part : MANIFOLD
The exhaust manifold on a car’s engine is the part that collects the exhaust gases from all of the cylinders and delivers those gases to a single exhaust pipe.

Down
3. Youth : STRIPLINGS
We’ve been calling youths “striplings” since the 14th century. The name probably originates from the description of a youth as a thin strip of a thing. I was a stripling, a long, long time ago …

4. Chop source : LOIN
Pork loin is the tissue along the top of the ribs.

6. Bit of D.J. equipment : MIKE
Supposedly, the world’s first radio disk jockey was one Ray Newby of Stockton, California who made his first broadcast in 1909 would you believe? When he was 16 years old and a student, he started to play his records on a primitive radio located in the Herrold College of Engineering and Wireless in San Jose. The records played back then were mostly recordings of Enrico Caruso.

8. Hold hands? : TARS
A Jack Tar, or just “tar”, was a seaman in the days of the British Empire. The term probably arose due to a sailor’s various uses of tar back then, including waterproofing his clothes and using tar in his hair to slick down his ponytail.

9. Nav. position : ENS
An ensign is the most junior rank of commissioned officer (usually) in the armed forces. The name comes from the tradition that the junior officer would be given the task of carrying the ensign flag.

10. Nestlé brand : EDY’S
Dreyers’ ice cream sells its products under the name Dreyers in the Western United States, and Edy’s in the Eastern states. The company’s founders were William Dryer and Joseph Edy.

11. Partridge family setting : NEST
Partridges are birds in the pheasant family. Of course it is partridges that turn up in the pear tree in the famous Christmas carol, “The 12 Days of Christmas”.

The Isle of Man is a large island located in the middle of the Irish Sea between Great Britain and Ireland. I used to spend a lot of time there in my youth, and a very interesting place it is indeed. The Isle of Man is classed as a British Crown Dependency, and isn’t part of the United Kingdom at all. It is self-governing and has its own parliament called the Tynwald. The Tynwald was created in AD 979, and is arguably the oldest continuously-running parliament in the world. The inhabitants of the island speak English, although they do have their own language as well called Manx, which is very similar to Irish Gaeilge and Scottish Gaelic. And then there are those Manx cats, the ones without any tails. I’ve seen lots of them, and can attest that they are indeed found all over the island.

J. D. Salinger wrote a short story called “For Esme – with Love and Squalor”, originally published in “The New Yorker” in 1950. It is a story about a young English girl called Esma and an American soldier, and is set in WWII.

22. “Natural Affection” playwright : INGE
Playwright William Inge had a run of success on Broadway in the early fifties. His most celebrated work of that time was the play “Picnic”, for which he was awarded a Pulitzer Prize. The original 1953 cast of “Picnic” included a young male actor making his debut on Broadway, and his name was Paul Newman.

William Inge’s play “Natural Affection” opened on Broadway in 1962 during a citywide newspaper strike. As a result of the strike, very few people knew about the play so it closed after only 36 performances.

23. Surgical aid : STENT
In the world of medicine and surgery, a stent is an artificial tube inserted inside a vessel in the body, say an artery, so that it reduces the effects of a local restriction in the body’s conduit.

24. Big band : HORDE
A “horde” is a large crowd. “Horde” ultimately derives from the Turkish “ordu” that means “camp, army”.

26. Foundering call : SOS
The combination of three dots – three dashes – three dots, is a Morse signal first introduced by the German government as a standard distress call in 1905. The sequence is remembered as the letters SOS (three dots – pause – three dashes – pause – three dots), although in the emergency signal there is no pause between the dots and dashes, so SOS is in effect only a mnemonic. Similarly, the phrases “Save Our Souls” and “Save Our Ship” are simply mnemonics, introduced after the “SOS” signal was adopted.

27. Black-and-white giants : ORCAS
The taxonomic name for the killer whale is Orcinus orca. The use of the name “orca”, rather than “killer whale”, is becoming more and more common. The Latin word “Orcinus” means “belonging to Orcus”, with Orcus being the name for the Kingdom of the Dead.

30. Rachel McAdams’s “Sherlock Holmes” role : IRENE ADLER
The character Irene Adler only appeared in one of the Sherlock Holmes stories by Sir Arthur Conan Doyle. In that story, “A Scandal in Bohemia”, Holmes expresses remarkable admiration for Adler as a woman and as a foe. As a result, derivative works in the Holmes genre often feature Adler as something of a romantic interest for Sherlock.

Rachel McAdams is a Canadian actress, from London, Ontario. Recently she played the role of Irene Adler in “Sherlock Holmes”, the love interest for the title character played by Robert Downey, Jr. The last film that I saw her in was the wonderful “Midnight in Paris” by Woody Allen.

34. Big wheel at a party? : BRIE
Brie is a soft cheese, named after the French province of Brie where it originated.

36. Beyond, to Browning : O’ER
Robert Browning met Elizabeth Barrett in 1845. Elizabeth was a sickly woman, confined to her parents’ house in Wimpole Street in London, largely due to the conservative and protective nature of her father. The two eventually eloped in 1846 and lived in self-inflicted exile in Italy. Away from the country of his birth, Browning was moved to write his now famous “Home Thoughts, From Abroad”, the first line of which is “Oh, to be in England …”

44. Short plea : NOLO
“Nolo contendere” is a legal term that translates from the Latin as “I do not wish to contend”. It’s the plea of “no contest”, an alternative to “guilty” or “not guilty”, meaning that one doesn’t admit guilt but nor does one dispute the charge.

45. Some govt. raiders : T-MEN
A T-man is a law-enforcement agent of the US Treasury.

46. Imitated Niobe : WEPT
In Greek mythology, when her children were killed, Niobe fled to Mt. Sipylus where she was turned into stone and wept for eternity. There is in fact a Niobe’s Rock on Mt. Sipylus that resembles a female face, and  so is known as “The Weeping Rock”.

47. Dept. of Labor division : OSHA
The Occupational Safety and Health Administration (OSHA) was created in 1970 during the Nixon administration. OSHA regulates workplaces in the private sector and also regulates just one government agency, namely the US Postal Service.

48. Stole option : MINK
There are two species of mink extant, the European Mink and the American Mink. There used to be a Sea Mink which was much larger than its two cousins, but it was hunted to extinction (for its fur) in the late 1800s. American Minks are farmed over in Europe for fur, and animal rights activists have released many of these animals into the wild when raiding mink farms. As a result the European Mink population has declined due to the presence of its larger and more adaptable American cousin.