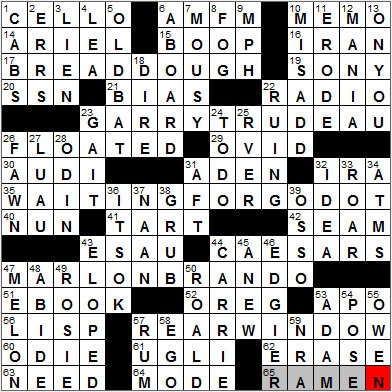 
Today’s Wiki-est, Amazonian Googlies
1. Yo-Yo Ma’s instrument : CELLO
Yo-Yo Ma is a marvelous American cellist, born in Paris to Chinese parents. He started studying the violin when he was very young, working his way up (in size) to the viola and finally to the cello. Ma has said that he wanted to play the double bass, but it was just too big for his relatively small frame.

10. Note at the office : MEMO
A memorandum is a “thing to be remembered” in Latin, from the verb “memorare” meaning “to call to mind”.

14. Disney’s “Little Mermaid” : ARIEL
In the 1989 Disney animated film “The Little Mermaid”, the title character is given the name Ariel. In the original fairy tale by Hans Christian Andersen, which dates back to 1836, the Little Mermaid is given no name at all so “Ariel” is a creation by Disney. There is of course a famous statue of the unnamed Little Mermaid sitting in Copenhagen Harbor in Andersen’s native Denmark.

15. Flirty toon Betty ___ : BOOP
Betty Boop made her first appearance on the screen in 1930, in a cartoon called “Dizzy Dishes”. Her character was modeled on the the It-girl, the sexy Clara Bow of movie fame. Back then Betty Boop was a sexy poodle and it wasn’t until 1932 that she morphed into completely human form. Betty was quite the risqué figure, but her vampish ways only lasted a few years. When the Production Code of 1934 came into force, Betty started to dress more modestly and toned down her behavior.

16. Persia, today : IRAN
Before 1935, the country we know today as Iran was called Persia by the Western world. The official name of the country since the Iranian Revolution of 1979 is the “Islamic Republic of Iran”.

20. Nine-digit ID : SSN
The main purpose of a Social Security Number (SSN) is to track individuals for the purposes of taxation although, given its ubiquitous use, it is looking more and more like an “identity number” to me. The social security number system was introduced in 1936. Prior to 1986, an SSN was required only for persons with substantial income, so many children under 14 had no number assigned. For some years the IRS had a concern that a lot of people were claiming children who did not actually exist as dependents on their tax returns. So, from 1986 onward, it is a requirement to get a SSN for any dependents over the ago of 5. Sure enough, in 1987 seven million dependents “disappeared”.

23. “Doonesbury” cartoonist : GARRY TRUDEAU
When cartoonist Garry Trudeau was deciding on a name for his comic strip in 1970, he opted for “Doonesbury”. He combined “doone”, which is slang for a “genial fool”, and the last syllables in “Pillsbury”, the family name of Trudeau’s roommate while he was at Yale.

29. Roman poet who wrote “To be loved, be lovable” : OVID
The Roman poet Publius Ovidius Naso is today known simply as Ovid. He is usually listed alongside the two other great Roman poets, Horace and Virgil.

30. German carmaker : AUDI
The Audi name has an interesting history. The Horch company was founded by August Horch in 1909 but soon after, Horch was forced out of his own business. He set up a new company and continued to use his own name as a brand. The old company sued him for using the Horch name so a meeting was held to choose something new. Horch’s young son was studying Latin in the room where the meeting was taking place. He pointed out that “Horch” was German for “hear”, and he suggested “Audi” as a replacement, the Latin for “listen”.

31. Port of Yemen : ADEN
Aden is a seaport in Yemen, located on the Gulf of Aden by the eastern approach to the Red Sea. Aden has a long history of British rule, from 1838 until a very messy withdrawal in 1967.

32. 401(k) alternative : IRA
I have to tell you, when I first came to the US from Ireland it was pretty confusing seeing big signs along the freeway advocating IRA contributions. Back in Ireland, contributing to the IRA was pretty illegal (where IRA stands for the outlawed Irish Republican Army!).

35. Samuel Beckett play with an unseen character : WAITING FOR GODOT
An Irishman I may be, but I have sat through so many Samuel Beckett plays (the Irish dramatist) and I have yet to come away feeling satisfied that I spent my time well. Of course I am in the minority, as his play “Waiting for Godot” was once voted the most significant English language plays of the 20th century. Maybe I will try again one day …

40. Convent inhabitant : NUN
Convents have been religious houses since the 1200s, but it wasn’t until the 1700s that convents became purely female institutions.

43. Jacob’s brother : ESAU
Esau was the twin brother of Jacob, the founder of the Israelites. When their mother Rebekah gave birth to the twins “the first emerged red and hairy all over (Esau), with his heel grasped by the hand of the second to come out (Jacob)”. As Esau was the first born, he was entitled to inherit his father’s wealth (it was his “birthright”). Instead, Esau sold his birthright to Jacob for the price of a “mess of pottage” (a meal of lentils).

44. ___ Palace (Vegas venue) : CAESARS
Caesars Palace is one of my favorite hotels on the Las Vegas strip, even though it is beginning to show its age. Caesars opened in 1966.

47. Vito Corleone portrayer : MARLON BRANDO
Marlon Brando won the Oscar for Best Actor for his portrayal of Vito Corleone in the 1972 blockbuster “The Godfather” but he turned down the award and didn’t attend the ceremony. Instead he sent a Native American rights activist called Sacheen Littlefeather who made a speech protesting the depiction of Native Americans in Hollywood movies. Brando wasn’t the first person to refuse an Oscar. George C. Scott did the same thing when he won for playing the title role in 1970’s “Patton”. Scott just didn’t like the whole idea of “competing” with other actors.

56. Speak like Sylvester : LISP
The famous cartoon character usually known as Sylvester the Cat is officially called Sylvester J. Pussycat, Sr. The name is derived from the scientific name for the wild cat species, “Felis silvestris”.

57. 1954 Hitchcock thriller : REAR WINDOW
“Rear Window” is a fabulous 1954 Hitchcock movie that is based on a short story called “It Had to Be Murder” by Cornell Woolrich. Stars in the film are James Stewart, Grace Kelly, with Raymond Burr playing the “bad guy”.

60. Dog often messed with by Garfield : ODIE
Odie is Garfield’s best friend and is a slobbery beagle.

61. Wrinkly fruit : UGLI
The ugli fruit is a hybrid of an orange and a tangerine and was first discovered growing wild in Jamaica where most ugli fruit comes from today.

64. Pie à la ___ : MODE
In French “à la mode” simply means “fashionable”. In America it has come to describe a way of serving pie, usually with ice cream or, as I recall from when I lived in Upstate New York, with cheese.

65. Japanese noodle soup : RAMEN
Ramen is a noodle dish composed of Chinese-style wheat noodles in a meat or fish broth flavored with soy or miso sauce. It is usually topped with sliced pork and dried seawood.

Down
3. Legal claim : LIEN
A lien is the right that one has to retain or secure someone’s property until a debt is paid.

8. Frequent weather condition at the Golden Gate Bridge : FOG
The Golden Gate is the opening of San Francisco Bay into the Pacific Ocean. The bridge that spans the Golden Gate was opened in 1937, and at the time was the longest suspension bridge in the world. One of the most eerie things about the Golden Gate Bridge is that is the most popular place in the whole world to commit suicide. Steps have been taken to reduce the number of suicides, including suicide hotline telephones placed along the walkway, but still there is one suicide every two weeks on average throughout the year. There are plans to place a purpose built net below the bridge as a deterrent.

27. Hawaiian feast : LUAU
Nowadays the word “luau” denotes almost any kind of party on the Hawaiian Islands, but to the purist a luau is a feast that always includes a serving of “poi”, the bulbous underground stems of taro baked with coconut milk.

28. Chief Norse god : ODIN
In Norse mythology, Odin was the chief of the gods. His wife Frigg was the queen of Asgard and the deity that gave us our English term Friday (via Anglo-Saxon). Odin’s son was Thor, and he gave us the name Thursday.

38. Vittles : GRUB
“Vittles” is a variant of the word “victuals”, meaning food fit for human consumption.

44. Stephen King’s first novel : CARRIE
Stephen King is a remarkably successful author having sold over 350 million copies of his books, many of which have been made into hit movies. I’ve tried reading two or three, but I really don’t do horror …

49. First name in TV talk : ROSIE
We don’t get to see Rosie O’Donnell on the screen very much these days. She had a very successful chat show that ran from 1996 to 2002. My favorite performance of hers on the big screen is in a supporting role to Meg Ryan in the 1993 movie “Sleepless in Seattle”.

50. Author Dahl : ROALD
Roald Dahl’s name is Norwegian. Dahl’s parents were from Norway although Dahl himself was Welsh. Dahl became one of the most successful authors of the twentieth century. A couple of his most famous titles are “James and the Giant Peach” and “Charlie and the Chocolate Factory”.

55. Actor Wilson : OWEN
The actor Owen Wilson was nominated for an Oscar, but not for his acting. He was nominated for co-writing the screenplay for “The Royal Tenenbaums” along with Wes Anderson. More recently he starred in the excellent movie “Midnight in Paris”, really playing Woody Allen better than Woody Allen himself!

57. Bacardi product : RUM
The Bacardi company is still family owned and operated, based in Hamilton, Bermuda. The company was founded in Santiago de Cuba and became successful by selling a refined form of rum, something new to a market that was used to a crude dark rum. The Bacardi family opposed the Castro regime as it came to power, so the company had to relocate to Bermuda.

58. Psyche part : EGO
Sigmund Freud created a structural model of the human psyche, breaking it into three parts: the id, the ego, and the super-ego. The id is that part of the psyche containing the basic instinctual drives. The ego seeks to please the id by causing realistic behavior that benefits the individual. The super-ego almost has a parental role, contradicting the id by introducing critical thinking and morals to behavioral choices.

59. Gun enthusiast’s org. : NRA
The NRA is the National Rifle Association, an organization that has been around since 1871. The group has had some celebrity presidents, including US President Ulysses S. Grant. It’s often said that the NRA is the most powerful lobbying group in Washington.