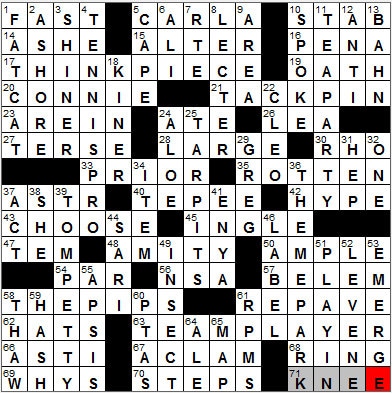 CROSSWORD SETTER: Gary Cee
THEME: Tepee … all of the theme answers are terms with two component words. The first word begins with T, and the second with P:


Today’s Wiki-est, Amazonian Googlies
1. Lickety-split : FAST
“Lickety-split” is the latest in a line of terms that derived from the word “lick”, which was used in the sense of a “fast sprint in a race” back in the early 1800s. From “lick” there evolved “licketie”, “lickety-click”, “lickety-cut” and finally “lickety-split”, all just colorful ways to say “fast”.

5. French first lady ___ Bruni-Sarkozy : CARLA
The very glamorous Carla Bruni is the wife of French President Nicolas Sarkozy. She is Sarkozy’s third wife, and in turn, this is the first marriage for Bruni. The couple met at a dinner party in November 2007 and were married just three months later. Bruni was born in Italy and was granted French nationality not long after the marriage.

14. ESPN’s Arthur ___ Courage Award : ASHE
The Arthur Ashe Courage Award is one of ESPN’s ESPY Awards. It has been presented since 1993, and although it is a sports-related award it does not necessarily go to sports players. For example, in 2009 the award went to Nelson Mandela.

16. Major-leaguer Tony or Alejandro : PENA
Tony Peña is a former professional baseball catcher and manager. He is now a coach with the New York Yankees.

Alejandro Peña is a former relief pitcher who played Major League Baseball from 1981 to 1996.

20. Francis who sang “Who’s Sorry Now?” : CONNIE
Connie Francis was a chart-topping vocalist in the fifties and sixties.

26. “Glee” actress ___ Michele : LEA
Lea Michele is both an actor and a singer and started performing as a child actor on Broadway, including appearances in “Les Miserables” and “Fiddler on the Roof”. These days she plays Rachel Berry on the Fox TV show “Glee”.

30. P, to Greeks : RHO
Rho is the Greek letter that looks just like our Roman letter “p”.

40. Indian home … or a hint to nine other answers in this puzzle : TEPEE
A tepee (also written as “tipi” and “teepee”) is a cone-shaped tent traditionally made from animal hides that is used by the Great Plains Native Americans. A wigwam is a completely different structure and is often a misnomer for a tepee. A wigwam is a domed structure built by Native Americans in the West and Southwest, intended to be a more permanent dwelling. The wigwam can also be covered with hides but more often was covered with grass, reeds, brush or cloth.

45. Fireplace : INGLE
An ingle is a name for a hearth or fireplace. The word “ingle” probably comes from the Scottish word “aingeal” meaning “fire”.

47. President pro ___ : TEM
Pro tempore can be abbreviated to “pro tem” or “p.t.” It is a Latin phrase which best translates as “for the time being”. It is used to describe a person who is acting for another, usually a superior.

56. American defense org. : NSA
The National Security Agency (NSA) was set up in 1952 by President Truman, a replacement for the Armed Forces Security Agency that had existed in the Department of Defense since 1949. The NSA has always been clouded in secrecy and even the 1952 letter from President Truman that established the agency was kept under wraps from the public for over a generation. I really like the nickname often used for the organization: “No Such Agency”.

57. Brazilian port of 1.4 million : BELEM
Belém is the capital city of the state of Pará in northern Brazil. Belém was founded by the Portuguese in 1616 and was the the first European colony on the Amazon river. “Belém” is the Portuguese word for “Bethlehem”.

58. Backup group for Gladys Knight : THE PIPS
Gladys Knight & the Pips were performing together from 1953 to 1989. The Pips were founded around Gladys Knight, originally featuring her brother, sister and two cousins. The group took its name from yet another cousin, called “Pip”.

61. Blacktop again, e.g. : REPAVE
Back in Ireland, the “pavement” is what we call the “footpath” (because the footpath is “paved”!). It’s very confusing when you arrive in this country from Ireland, and a little dangerous, as one has been taught to “walk on the pavement” since one was a toddler …

62. Busby and derby : HATS
A busby is a military head-dress made from fur.

I think a bowler hat is called a derby here in the US. It was first produced in 1849 in London by hatmakers Thomas and William Bowler, hence the name. The alternative name of “derby” comes from the tradition of wearing bowler hats at the Derby horse race (a major race held annually in England).

66. Italian wine city : ASTI
Asti is in the Piedmont region of northwest Italy. It is perhaps most famous for its Asti Spumante sparkling white wine.

67. Happy as ___ : A CLAM
Our phrase “happy as a clam” dates back to the mid-1600s. Back then it was a more lengthy expression “happy as a clam in the mud at high tide”. The idea was that a clam would be happy in its muddy home at high tide, because no one from land could get to it and eat it.

Down
1. Nabob : FAT CAT
A nabob is a person of wealth and prominence. “Nabob” derives from the title of a governor in India.

5. ___ Canaveral : CAPE
The famous headland in Florida called Cape Canaveral was named by Spanish explorers in the early 16th century. As the Cape acts as a launching station for many of NASA’s rockets, when President Kennedy was assassinated in 1963 the NASA facility on nearby Merritt Island was renamed the Kennedy Space Center. President Johnson went as far as renaming the whole of Cape Canaveral to Cape Kennedy. The name change for the cape didn’t go down well in Florida though, as the headland had been called Cape Canaveral for over 400 years. So, the name was restored in 1973, and Cape Kennedy is no more.

6. Rumble in the Jungle winner : ALI
The Rumble in the Jungle was that celebrated fight between Muhammad Ali and George Foreman that took place in Zaire (now the Democratic Republic of the Congo). The fight was set in Zaire because of financial arrangements between promoter Don King and Zaire’s President Mobuto Seko. Ali coined the term “Rope-a-dope” to describe his incredibly successful strategy in the contest. From the second round onwards, Ali adopted a protected stance on the ropes letting Foreman pound him with blows to the body and head, with Ali using his arms to dissipate the power of the punches. He kept this up until the eighth round and then opened up and downed the exhausted Foreman with a left-right combination. I hate boxing but I have to say, that was an fascinating fight.

7. GPS recommendation: Abbr. : RTE
GPS stands for Global Positioning System. The modern GPS system that we use today was built by the military who received the massive funding needed because of fears during the Cold War of the use of Intercontinental Ballistic Missiles. We civilians, all round the world, owe a lot to President Ronald Reagan because he directed the military to make GPS technology available to the public for the common good. He was moved to do so after the Soviet Union shot down KAL flight 007 carrying 269 people, just because it accidentally strayed into Soviet airspace.

11. Group associated with 2009’s Taxpayer March on Washington : TEA PARTY
The contemporary Tea Party movement that started in 2008/2009 of course takes its name from the Boston Tea Party.

13. U-___ (Berlin railway) : BAHN
“U-Bahn” is the name given to the underground train system in several cities around Germany including Berlin, Hamburg, Munich and Nuremberg.

18. Hall-of-Famer Ralph of the Pirates : KINER
Ralph Kiner is a former Major League Baseball player. He has for decades been calling the games for the New York Mets from the broadcast booth.

22. ’63 Liz Taylor role : CLEO
The 1963 movie “Cleopatra” really is an epic work. It was the highest grossing film of the year, taking in $26 million dollars at the box office, yet it still lost money. The original budget for the film was just $2 million, but so many things went wrong that the final cost swelled to a staggering $44 million dollars, making it the second most expensive movie ever made (taking into account inflation). Elizabeth Taylor was supposed to earn a record sum of $1 million for the film, and ended up earning seven times that amount due to delays. But she paid dearly as she became seriously ill during shooting and had to have an emergency tracheotomy to save her life. The scar in her throat can actually be seen in some of the shots in the film.

24. Skin soother : ALOE
Aloe vera has a number of alternate names that are descriptive of its efficacy as a medicine. These include the First Aid plant, Wand of Heaven, Silent Healer and Miracle Plant.

25. La Brea fossil preserve : TAR PITS
The La Brea Tar Pits are located right in the heart of the city of Los Angeles. At the site there is a constant flow of tar that seeps up to the surface from underground, a phenomenon that has been around for tens of thousands of years. What is significant at La Brea is that much of the seeping tar is covered by water. Over many, many centuries animals came to the water to drink and became trapped in the tar as they entered the water to quench their thirst. The tar then preserved the bones of the dead animals. Today a museum is located right by the Tar Pits, recovering bones and displaying specimens of the animals found there. It’s well worth a visit if you are ever in town …

29. Actor/TV personality Kinnear : GREG
Greg Kinnear is a favorite actor of mine, probably best recognized for his Oscar-nominated performance in the excellent film “As Good as it Gets” from 1997.

31. Cool, ’50s-style : HEP
The slang term “hep” meaning “cool” has the same meaning as the later, derivative term “hip”. The origins of “hep” seem unclear, but it was adopted by jazz musicians of the early 1900s.

39. Singer with the Heartbreakers : TOM PETTY
The singer-songwriter Tom Petty first became interested in rock and roll music when he met Elvis Presley at ten-years-old. Later he was inspired to get into a band when he saw The Beatles on “The Ed Sullivan Show”. Pretty cool role models, I’d say …

41. New Age Grammy winner : ENYA
Enya’s real name is Eithne Patricia Ní Bhraonáin, which can translate from the Irish into Enya Brennan. Her Donegal family (in the northwest of Ireland) formed a band called Clannad, which included Enya. In 1980 Enya launched her very successful solo career. She sure does turn up a lot in crosswords!

44. Hindu wrap : SARI
A sari (also saree) is a strip of cloth, as one might imagine, unusual perhaps in that is unstitched along the whole of its length. It can range from four to nine meters long (that’s a lot of material!). The sari is usually wrapped around the waist, then draped over the shoulder leaving the midriff bare. I must say, it can be a beautiful item of clothing.

52. Actor Sam of stage and screen : LEVENE
You might have seen the actor Sam Levene in some of the wonderful “Thin Man” films. He played a police lieutenant in two of movies in the series.