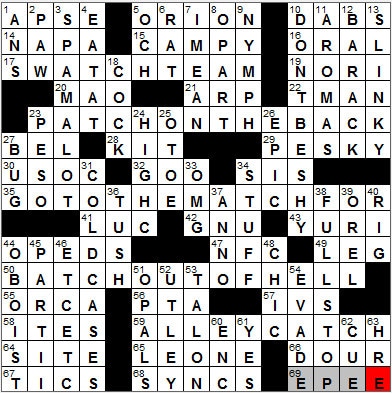 CROSSWORD SETTER: Chuck Deodene
THEME: Add a CH … all of the theme answers are well-known phrases but with the letters CH inserted to give an answer that suits the clue:


Today’s Wiki-est, Amazonian Googlies
1. Semidomed area : APSE
The apse of a church or cathedral is a semicircular recess in an outer wall, usually with a half-dome as a roof, and often where there resides an altar. Originally, apses were used as burial places for the clergy and also for storage of important relics.

In Greek mythology Oeno was the goddess of wine, giving us “oen-” as a prefix meaning “wine”. Oenology, for example, is the study of wine.

15. Like a drag revue : CAMPY
The etymology of the term “drag”, as used in the transvestite world, seems to be unclear. It perhaps relates to the tendency of a transvestite’s skirts to drag along the ground in days of old (although why they just didn’t hitch up their skirts is beyond me!).

16. ___-B : ORAL
The Oral-B toothbrush was introduced to the world in 1950, designed by a California periodontist. The first “model” was the Oral-B 60, a name given to reflect the 60 tufts in the brush. And in 1969, the Oral-B was the first toothbrush to get to the moon, traveling on the Apollo 11 spacecraft.

17. Fabric store employees? : SWAT(CH) TEAM
SWAT is an acronym for Special Weapons and Tactics. The first SWAT team was pulled together in the Los Angeles Police Department in 1968.

20. “Nixon in China” role : MAO
“Nixon in China” is an opera by John Adams, libretto by Alice Goodman. The piece was of course inspired by President Nixon’s famous visit to China in 1972.

21. Sculptor Jean : ARP
Hans Arp was a French artist, renowned for his work with torn and pasted paper, although that wasn’t the only medium he used. He was the son of a French mother and German father, and spoke both languages fluently. When he was speaking German, he gave his name as Hans Arp, but when speaking French, he called himself Jean Arp. Both “Hans” and “Jean” translate into English as “John”. In WWI Arp moved to Switzerland to avoid being called up to fight, taking advantage of Swiss neutrality. Eventually he was told to report to the German Consulate and fill out paperwork for the draft. In order to get out of fighting, Arp messed up the paperwork by writing in the date in every blank space on the forms. Then he took off all of his clothes and walked with his papers over to the officials in charge. He was sent home …

22. Fed in pursuit of counterfeiters : T-MAN
A T-man is a law-enforcement agent of the US Treasury.

30. Org. that oversees American athletes : USOC
The United States Olympic Committee has a federal charter but it doesn’t receive any funds from the US government. As such, it has to engage in fundraising just like any other charitable organization.

41. “La Femme Nikita” director Besson : LUC
Luc Besson is a French film director and producer. One of the movies that he wrote and directed is “Nikita”, released in 1990. The actress who plays the title role in “Nikita” is Anne Parillaud, Besson’s wife.

“La Femme Nikita” is a Canadian action/drama series based on the film “Nikita” that was written and directed by Luc Besson.

42. Serengeti herd member : GNU
A gnu is also known as a wildebeest, an antelope native to Africa. Wildebeest is actually the Dutch word for “wild beast”.

The Serengeti is a region in Africa, located in northern Tanzania and southwest Kenya. The name “Serngeti” comes from the Maasai language and means “Endless Plains”.

43. Vostok 1’s Gagarin : YURI
Yuri Gagarin became the first man in space when his spacecraft, Vostok I, made one orbit of the Earth in 1961. Sadly, Gagarin died only seven years later, in a plane crash.

47. Dallas is in it, for short : NFC
The Dallas Cowboys play in the National Football Conference (NFC) of the NFL. The Cowboys are famous for a lengthy streak of 20 consecutive winning seasons, from 1966 to 1985. They are the highest valued sports franchise in the country. The only team in the world that’s worth more money is the UK’s Manchester United soccer team.

55. Ocean predator : ORCA
The taxonomic name for the killer whale is Orcinus orca. The use of the name “orca”, rather than “killer whale”, is becoming more and more common. The Latin word “Orcinus” means “belonging to Orcus”, with Orcus being the name for the Kingdom of the Dead.

65. Sierra ___ : LEONE
The Republic of Sierra Leone is a country in West Africa, lying on the Atlantic Coast. The capital city of Freetown was originally set up as a colony to house the “Black Poor” of London, England. These people were mainly freed British slaves of Caribbean descent, who were living a miserable life in the run-down parts of London. Perhaps to help the impoverished souls, perhaps to rid the streets of “a problem”, three ships were chartered in 1787 to transport a group of blacks, with some whites, to a piece of land purchased in Sierra Leone. Those who made the voyage were guaranteed British citizenship and protection. The descendants of these immigrants, and others who made the journey over the next 60 years, make up the ethnic group that’s today called the Sierra Leone Creole.

69. Form of fencing : EPEE
The French word for sword is épée. In competitive fencing the épée is connected to a system that records an electrical signal when legal contact is made on an opponent’s body.

3. 2005 Broadway hit based on a 1974 film : SPAMALOT
The hit musical “Spamalot” is a show derived from the 1974 movie “Monty Python and the Holy Grail”. In typical Monty Python style, the action starts just before the curtain goes up with an announcement recorded by the great John Cleese:

9. Young termite, e.g. : NYMPH
A nymph is an immature form of some insects.

12. President after George : BARACK
President Obama’s first name, Barack, is Swahili with roots in an old Arabic word meaning “blessed”. Barack was the President’s father’s name. President Obama’s middle name is Hussein, an Arabic word meaning “good” or “handsome one”. Hussein was the name of the President’s grandfather on the paternal side. His surname “Obama” doesn’t really have a translation, but is common among the Luo tribe of Kenya.

13. Toy consisting of 80 feet of wire : SLINKY
The marvelous Slinky toy was invented in the early forties by a naval engineer called Richard James. James was developing springs for the navy that could stabilize sensitive instruments in rough seas. One day he accidentally knocked one of his experimental coils off a shelf and watched it “step’ onto a stack of books, then onto a table, and onto the floor, where it recoiled itself very neatly. The Slinky was born …

25. Plains native : OTOE
The Otoe were the first Native American tribe encountered in the West by Lewis and Clark. The explorers met with the Otoe (and Missouria) tribes in 1804 at a spot that became known as Council Bluff. The site is now a National Historic Landmark called Fort Atkinson, Nebraska as a fort was built there on Lewis’s recommendation.

27. Flu : BUG
Influenza is an ailment that is caused by a virus. The virus is readily inactivated by the use of soap, so washing hands and surfaces is especially helpful in containing flu outbreaks.

36. Heinie : TUSH
“Tush”, a word for the backside, is an abbreviation of “tochus” that comes from the Yiddish “tokhes”.

The slang term “heinie” is probably a contraction of “hind end”.

37. ___ Domini : ANNO
The designations Anno Domini (AD, “year of Our Lord”) and Before Christ (BC) are found in the Julian and Gregorian calendars. The dividing point between AD and BC is the year of the conception of Jesus, with AD 1 following 1 BC, without a year “0” in between. The AD/BC scheme dates back to AD 525, and gained wide acceptance soon after AD 800. Nowadays, a modified version has become popular, with CE (Common/Christian Era) used to replace AD, and BCE (Before the Common/Christian Era) replacing BC.

39. Oka River city : OREL
Orel (also Oryol) is a city lying on the Oka River, just over 200 miles SSW of Moscow. Orel was one of the cities occupied by Germany during WWII. It was liberated in 1943, but had been almost completely destroyed.

44. Wind section player : OBOIST
The oboe is perhaps my favorite of the reed instruments. The name “oboe” comes from the French “hautbois” which means “high wood”. When you hear an orchestra tuning before a performance you’ll note (pun intended!) the oboe starts off the process by playing an “A”. The rest of the musicians in turn tune to that oboe’s “A”. Oh, and if you want to read a fun book (almost an “exposé”) about life playing the oboe, you might try “Mozart in the Jungle” by oboist Blair Tindall. I heard recently that HBO are working towards a pilot based on the book. I can’t wait to see it!

51. Milky gems : OPALS
An opal is often described as having a milky iridescence, known as “opalescence”.

60. S.A.S.E., for one : ENC
One type of enclosure (ENC) in a letter might be a self-addressed stamped envelope (SASE).

61. “Getting to ___” (best-selling business book) : YES
“Getting to YES: Negotiating Agreement Without Giving In” is a business book designed to explain the “art of the deal”. According to the book, the four steps to a successful negotiation are:

– Separate the people from the problem.
– Focus on interests, not positions.
– Invent options for mutual gain.
– Insist on using objective criteria.

63. Bygone Eur. realm : HRE
Pepin the Short was the Duke of the Franks from 751 to 768. He expanded the Frankish Empire, and then law dictated that he had to leave the Empire divided between his two sons, Carloman I and Charlemagne. Carloman I was given lands that were centered around Paris, and Charlemagne was given lands that completely surrounded his brothers territory. So it fell to Charlemagne to defend and extend the borders of the empire, and because of this it is Charlemagne that we read about today, not Carloman I. It was Emperor Charlemagne who in effect founded the Holy Roman Empire.