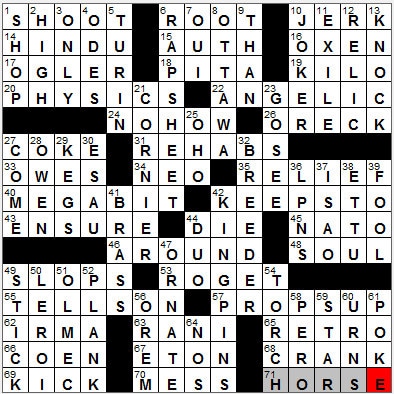 CROSSWORD SETTER: Jeff Chen
THEME: Around and Around … the theme answers are those at the edge of the grid, and each of them requires the word “around” added at the end in order for the clue to make sense:


Today’s Wiki-est, Amazonian Googlies
14. Karma believer : HINDU
Karma is religious concept with its basis in Indian faiths. Karma embraces the notion of cause and effect. Good deeds have good consequences at some later point in one’s life, future life, or afterlife and vice versa.

18. ___ bread : PITA
Pita is a lovely bread in Middle-Eastern and Mediterranean cuisines. It is usually round, and has a “pocket” in the center. The pocket is created by steam that puffs up the dough during cooking leaving a void when the bread cools. The pockets were a big hit in the seventies when someone came up with the idea of using them for fillings hence creating pita sandwiches or “pita pockets”.

26. Big name in vacuums : ORECK
The Oreck Corporation is named after founder David Oreck and makes vacuum cleaners and air purifiers. The company started out selling vacuum cleaners by mail, a new concept in 1963. David Oreck himself appears regularly as a spokesman in the company’s ads and infomercials.

27. Furnace fuel : COKE
Coke is coal that has been baked at very high temperatures to drive off volatile constituents such as water, coal-gas and coal tar. The resulting coke looks like coal, but is grey, porous and much lighter.

34. The One, in “The Matrix” : NEO
The 1999 movie sensation “The Matrix” was meant to be set in a nondescript urban environment. It was actually shot in Australia, as one of the co-producers of the film was the Australian company, Village Roadshow Pictures. You can pick up all sorts of clues about the location when watching the film, including a view of Sydney Harbour Bridge in a background shot. Also, traffic drives along on the left and there are signs for the “lift” instead of an “elevator”.

40. Storage unit : MEGABIT
In the world of computers, a “bit” is the basic unit of information. It has a value of 0 or 1. A “byte” is a small collection of bits (usually 8) and is the number of bits needed to uniquely identify a character of text.

44. One of two in Monopoly : DIE
The commercial game of Monopoly is supposedly a remake of “The Landlord’s Game” created in 1903 by a Quaker woman called Lizzie Phillips. Phillips used her game as a tool to explain the single tax theory of American economist Henry George. The Landlord’s Game was first produced commercially in 1924. The incredibly successful derivative game called Monopoly was introduced in 1933 by Charles Darrow, making him a very rich man when Parker Brothers bought the rights to the game just two years later in 1935.

NATO is the North Atlantic Treaty Organization (or OTAN in French, “l’Organisation du Traité de l’Atlantique Nord”). NATO was founded not long after WWII, in 1949, and is headquartered in Brussels, Belgium. The first NATO Secretary General was Lord Ismay, Winston Churchill’s chief military assistant during WWII. Famously Lord Ismay said the goal of NATO was “to keep the Russians out, the Americans in, and the Germans down.”

48. Music genre : SOUL
Soul music originated in the United States and was born out of gospel music and rhythm & blues. I read one quotation that describes soul as “music that arose out of the black experience in America”.

53. Synonym source : ROGET
Peter Mark Roget was an English lexicographer. He was an avid maker of lists, apparently using the routine of list-making to combat depression, a condition he endured for most of his life. He published his famous thesaurus in 1852, with revisions and expansions being made years later by his son, and then in turn by his grandson.

66. “The Big Lebowski” director : COEN
I think it’s great to see two brothers working together and being so successful. Joel and Ethan Coen are two movie producers and directors who both live in New York City. They do love the movie-making business and they even married “insiders”. Ethan’s wife is film editor Tricia Cooke, and Joel is married to one of my favorite actresses, the lovely Frances McDormand.

“The Big Lebowski” is a 1998 comedy directed by Joel and Ethan Coen, and starring Jeff Bridges in the title role. The film’s script is loosely based on the Raymond Chandler novel “The Big Sleep”. I thought :The Big Lebowski” was just “okay” though …

67. George Orwell’s alma mater : ETON
The world-famous Eton College is just a brisk walk from Windsor Castle, which itself is just outside London. Eton is noted for producing many British leaders including David Cameron who took power in the last UK general election. The list of Old Etonians also includes Princes William and Harry, the Duke of Wellington, George Orwell, and the creator of James Bond, Ian Fleming (as well as 007 himself as described in the Fleming novels).

George Orwell was the pen name of Eric Arthur Blair, the famous British author of the classics “Nineteen Eighty-Four” and “Animal Farm”.

Down
4. Works of Horace : ODES
One of Ancient Rome’s leading lyric poets was Quintus Horatius Flaccus, or “Horace” as we tend to know him.

5. Famous cloth locale : TURIN
The Shroud of Turin has to be one of the most controversial, and most studied, human artifacts ever unearthed. The Shroud is a linen cloth on which there is the image of a man who appears to have wounds inflicted by crucifixion. Many believe that the Shroud is the burial cloth in which Jesus Christ was placed after he died on the cross. The Shroud was kept in various locations in France for centuries before being moved to Turin Cathedral in 1578, from which it gets its name, and where it has been located ever since.

7. Magazine once published by Playboy : OUI
“Oui” is a men’s pornographic magazine. It started out life in France in 1964 as “Lui”, where it was the French equivalent of “Playboy” magazine. “Playboy” bought the rights to publish “Lui” in the US, and did so from 1972 under the title “Oui”. “Playboy” got out of the deal in 1981 as “Oui” was just eating into sales of “Playboy” magazine.

8. Senator’s home : OTTAWA
The Senators are the NHL hockey team in Ottawa, Canada. The current team, founded in the 1992-93 season, is the second NHL team in the city to use the name “Senators”. The original team was founded in 1917 and had a very successful run until the league expanded into the US in the late twenties. The cost of operating in what became the smallest NHL city eventually drove the Senators to St. Louis where they played for a year as the Eagles before finally folding.

28. Meany of story : OWEN
“A Prayer for Owen Meany” is a novel by John Irving, first published in 1989. Although Irving’s work is an independent story, it is written as a homage to “The Tin Drum” by Günter Grass.

30. Biblical twin : ESAU
Esau was the twin brother of Jacob, the founder of the Israelites. When their mother Rebekah gave birth to the twins “the first emerged red and hairy all over (Esau), with his heel grasped by the hand of the second to come out (Jacob)”. As Esau was the first born, he was entitled to inherit his father’s wealth (it was his “birthright”). Instead, Esau sold his birthright to Jacob for the price of a “mess of pottage” (a meal of lentils).

37. Golfer Aoki : ISAO
Isao Aoki is one of Japan’s greatest golfers, now playing on the senior circuit. His best finish in a major tournament was runner-up to Jack Nicklaus in the 1980 US Open.

38. Cry of shocked hurt : ET TU
It was Shakespeare who popularized the words “Et tu, Brute?” (And you, Brutus?), in his play “Julius Caesar”, although the phrase was around long before he penned his drama. It’s not known what Julius Caesar actually said just before he was assassinated on the steps of the Senate in Rome.

44. The Smothers Brothers, e.g. : DUO
The Smothers Brothers are Tom and Dick Smothers, all round entertainers originally from New York, although they were raised by their widowed mother in the Los Angeles area. Famously, the duo became part of the counter-culture that developed during the sixties, and found their television show was constantly being censored by the CBS network. CBS eventually cancelled the show in 1969 at the height of a dispute about content. I’ve seen the Smothers Brothers perform live on more than one occasion, and they provide great value for money …

51. Ancient Mexican : OLMEC
The Olmec were an ancient civilization that lived in the lowlands of south-central Mexico from about 1500 BC to about 400 BC.

52. Party principle : PLANK
A political party’s platform is also known as its manifesto, and is a list of actions that the party would support if elected. Items on this list are called “planks”, a play on the planks of wood that might support a public speaking platform.

54. Johnny Storm a k a the Human ___ : TORCH
The Human Torch was one of the founding members of the Marvel Comics “good-guy” team called the Fantastic Four.

56. City near Provo : OREM
Orem, Utah was originally known as “Sharon” (a Biblical name), then “Provo Bench”, and in 1914 it was given the family name of a local railroad operator, “Orem”. Orem gave itself the nickname “Family City USA” and, backing up that claim, in 2010 “Forbes” rated Orem the 5th best place in the country to raise a family.