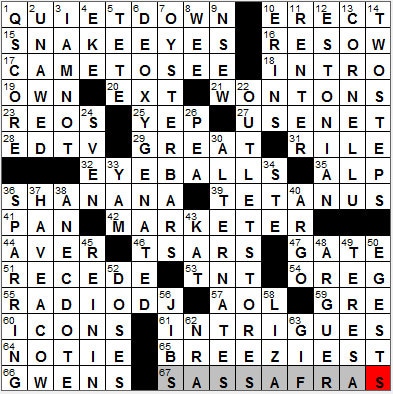 
Today’s Wiki-est, Amazonian Googlies
15. 1 + 1 : SNAKE EYES
Snake eyes is the slang term for a roll of two dice in which one pip turns up on each die.

18. Emcee’s delivery : INTRO
“Emcee” come from “MC”, an abbreviation for the Master or Mistress of Ceremonies.

20. Part of a suite no. : EXT
I guess the assumption is that in a suite of rooms with a number of telephones, each phone would have an extension number.

21. Asian soup ingredients : WONTONS
A wonton is a dumpling used in Chinese cooking. Wontons are often boiled and served in a wonton soup.

23. Some antique buses : REOS
The REO Motor Company was founded by Ransom E. Olds (hence the name REO). The company made cars, trucks and buses, and was in business from 1905 to 1975 in Lansing, Michigan.

27. Setting for many early online discussions : USENET
Remember the good old days, when you read messages online in “newsgroups”? Well, that system of aggregating public messages is known as Usenet, and it’s still around today. Usenet started operating in 1980, some ten years before the World Wide Web was introduced (which system has displaced Usenet in terms of popularity). Usenet definitely played a significant part in the history of the Internet. For instance, the terms “FAQ” and “spam” were both born on Usenet.

28. 1999 Ron Howard bomb : EDTV
“EDtv” is a comedy directed by Ron Howard starring Matthew McConaughey, released in 1999. The plot has a “Big Brother” feel to it, as it is about a TV show broadcasting someone’s life, 24 hours a day, 7 days a week.

Ron Howard sure has come a long way since playing Opie on “The Andy Griffith Show”. Howard has directed some fabulous movies, including favorites of mine like “Apollo 13”, “A Beautiful Mind” and “The Da Vinci Code”. And today, Opie is a grandfather …

32. They’re found in orbits : EYEBALLS
The orbits are the eye sockets in the skull.

36. Evoker of 1950s nostalgia : SHA NA NA
Do you remember the band “Johnny Casino & The Gamblers” in the movie “Grease”? That was actually the real-world group Sha Na Na. Johnny Casino & the Gamblers sang “Those Magic Changes” at the high school dance, in between “Rock’N Roll Is Here to Stay” and “Hound Dog”. Sha Na Na got together in the sixties, and are still performing today.

39. What some vaccinations prevent : TETANUS
Tetanus is caused by a bacterial infection, generally contracted through an infected wound. As the infection spreads throughout the body a toxin produced by the bacterium causes prolonged contraction of skeletal muscles. One muscle that is notably affected is in the jaw, giving the condition its common name, “lockjaw”.

53. Cause of a messy breakup? : TNT
TNT is an abbreviation for trinitrotoluene. The chemical was first produced by the German chemist Joseph Wilbrand in 1863, who developed it for use as a yellow dye. TNT is relatively difficult to detonate so it was on the market as a dye for some years before its more explosive properties were discovered.

54. Where the John Day R. flows : OREG
The Columbia River actually has two tributaries called the John Day River in Oregon, one in the northeastern part of the state, and the other in the northwest. Both rivers are named for John Day, a fur trapper active in the old Oregon Country in the early 1800s.

55. One might do a countdown : RADIO DJ
The world’s first radio disk jockey was one Ray Newby of Stockton, California who made his first broadcast in 1909, would you believe? When he was 16 years old and a student, he started to play his records on a primitive radio located in the Herrold College of Engineering and Wireless in San Jose. The records played back then were mostly recordings by Enrico Caruso.

57. Engadget’s co. : AOL
“Engadget” can be described as a blog or as an online magazine. The articles or posts on the Engadget website cover the latest gadgets and consumer electronics.

59. Coll. administration : GRE
Passing the Graduate Record Examination (GRE) is usually a requirement for entry into graduate school here in the US.

66. Journalist Ifill and others : GWENS
Gwen Ifill is a television jounalist, regularly seen on PBS’s “Newshour”. She is also the moderator on the weekly PBS show “Washington Week”. Ifill was also selected to moderate the US Vice Presidential debates in 2004 and 2008.

67. Gumbo seasoning source : SASSAFRAS
Sassafras is a genus of deciduous tree. Sassafras leaves are dried and ground to make filé powder, a spicy herb used in making some types of gumbo.

Gumbo is a type of stew or soup that originated in Louisiana. The primary ingredient can be meat or fish, but to be true gumbo it must include the “holy trinity” of vegetables, namely celery, bell peppers and onion. Okra used to be a requirement but this is no longer the case. Okra gave the dish its name as the vernacular word for this African vegetable is “okingumbo”, from the Bantu language spoken by many of the slaves brought to America.

Down
1. Measure of popularity : Q SCORE
“Q Score” is a measurement used in the world of marketing. The Q Score for a brand or company say, is its appeal, how highly it is regarded. The Q stands for “quotient”.

4. Wring (out) : EKE
To “eke out” means to “make something go further or last longer”. So, you can eke out your income by cutting back on expenses. I always have a problem with the commonly cited definition of “eke out” as “barely get by”. Close but no cigar, I say …

10. Sportscaster Andrews and others : ERINS
Erin Andrews is a sports reporter. I don’t watch much in the line of sports but I do know Ms. Andrews for her appearances on “Dancing with the Stars” in 2010. She did quite well and made it to the final of the show.

11. Thrifty customer, e.g. : RENTER
Thrifty Car Rental was founded back in 1958. Thrifty became part of Chrysler in 1989 and was merged by Chrysler with Dollar Rent A Car the following year.

12. Like the developers of Skype : ESTONIAN
Estonia is one of the former Soviet Socialist Republics. It is located in Northern Europe on the Baltic Sea, due south of Finland. Estonia has been overrun and ruled by various empires over the centuries. Estonia did enjoy a few years of freedom at the beginning of the 20th century after a war of independence against the Russian Empire. However, the country was occupied again during WWII, first by the Russians and then the Germans, and reoccupied by the Soviets in 1944. Estonia has flourished as an independent country again since the collapse of the USSR in 1991.

The main feature of the Skype application is that it allows voice communication to take place over the Internet (aka VoIP). Skype has other features such as video conferencing and instant messaging, but the application made its name from voice communication. Skype was founded by two Scandinavian entrepreneurs and the software necessary was developed by a team of engineers in Estonia. The development project was originally called “Sky peer-to-peer” which gave birth to the name “Skyper”, which had to be shortened to “Skype” because the skyper.com domain name was already in use.

13. Big Red, in the N.C.A.A. : CORNELL U
Ezra Cornell was an associate of Samuel Morse and made his money in the telegraph business. After he retired he co-founded Cornell University in Ithaca, New York. He provided a generous endowment and donated his farm as a site for the school, and was then rewarded by having the institute named after him.

Big Red is the name given to the athletic teams of Cornell University.

22. They were traditionally attached to factories : OUTLET STORES
Outlet stores are stores where manufacturers sell directly to the public, without going through a middleman like a department store, say. The original outlet stores were physically located by a factory and were mainly used to sell off damaged or excess inventory at marked down prices. I used to work for GE many moons ago and remember buying a couple of televisions in an outlet store as they had been used for life testing by GE’s quality assurance group. They were probably the best television sets the company produced as they had been extensively quality tested, and I picked them up for just a few bucks. They both lasted for decades …

24. Ren’s cousin of cartoondom : SVEN
Svën Höek is a character on “The Ren & Stimpy Show”.

33. Nigerian food staple : YAM
Although in the US we sometimes refer to sweet potatoes as “yams”, the yam is actually a completely different family of plant. True yams are more common in other parts of the the world than they are in this country, and especially in Africa.

37. Freak : HAVE A COW
The phrase “don’t have a cow” originated in the fifties, a variation of the older “don’t have kittens”. The concept behind the phrase is that one shouldn’t get worked up, it’s not like one is giving birth to a cow.

40. Vessel protected by Hera : ARGO
In Greek mythology, Jason and the Argonauts sailed on the Argo in search of the Golden Fleece. The vessel was called the “Argo” in honor of the ship’s builder, a man named Argus.

In Greek mythology, Hera was the wife of Zeus and was noted for her jealousy and vengeful nature, particularly against those who vied for the affections of her husband. The equivalent character in Roman mythology was Juno. Hera was the daughter of Cronus and Rhea.

43. “2 Broke Girls” co-star Dennings : KAT
Kat Dennings is the stage name of actress Katherine Litwack, noted today for her co-starring role on CBS’s sitcom “2 Broke Girls”. Dennings is an avid blogger, and you can check out her video blog on YouTube.

49. Wright with an Oscar : TERESA
Teresa Wright was an actress from Harlem in New York City. Wright won an Oscar in 1942 for Best Supporting Actress in “Mrs. Miniver”. That same year she was nominated for Best Actress for her starring role opposite Gary Cooper in “Pride of the Yankees”.

56. Yacht parts : JIBS
A jib is a triangular sail that is set at the bow of a sailboat.

58. “___ of Lambeth” (Maugham novel) : LIZA
“Liza of Lambeth” was the first novel written by English playwright and novelist W. Somerset Maugham. The novel deals with the tough and short life experienced by a young factory worker in London.

62. Its first pres. was Gen. Burnside : NRA
The NRA is the National Rifle Association, an organization that has been around since 1871. The NRA has had some celebrity presidents, including US President Ulysses S. Grant. It’s often said that the NRA is the most powerful lobbying group in Washington.

Ambrose Burnside was a Union Army general during the Civil War, and a successful businessman. When the National Rifle Association was formed in 1871, Burnside was chosen as the organization’s first president. Burnside was also noted for the very lush growth of hair on his face and the distinctive style in which he cut it. We now know that style of cut as “sideburns”, a term derived from the Burnside name.

63. Picture file suffix : GIF
A bitmap is an image file format used to store digital images. Basically, each pixel in a bitmap file is stored as a “bit” of information, hence the name “bitmap”. In 1987, CompuServe introduced a new type of image file called the Graphics Interchange Format (GIF). A GIF image takes the same information as a bitmap, and then compresses it, resulting in a smaller file size. However, during compression the image may lose some resolution.