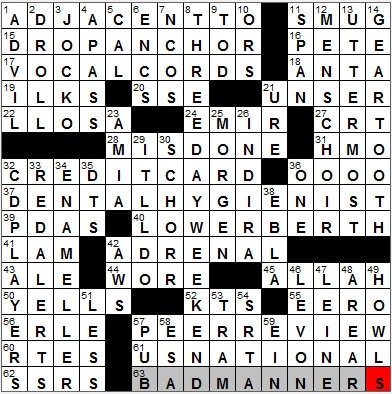 
Today’s Wiki-est, Amazonian Googlies
Across
11. Far from self-effacing : SMUG
Someone described as “smug” is said to have a self-satisfied air. Back in the 1500s, smug meant neat or smart, and then was used to describe a particularly attractive woman. Our current usage started in the early 1700s.

16. Rose in a field : PETE
Pete Rose was a talented baseball player who holds the record for all-time Major League hits. In recent years of course his reputation has been tarnished by admissions that he bet on games in which he played and managed.

18. Old Broadway production grp. : ANTA
The American National Theater and Academy (ANTA) is a not-for-profit theater producer and training organization. ANTA was set up in 1935 to be the official national theater of the United States, but today its main focus is the National Theater Conservatory at the Denver Center for the Performing Arts.

21. Albuquerque’s ___ Racing Museum : UNSER
The Unser family seems to have racing cars in its blood. Al Unser, Sr. won the Indy 500 on four occasions. Al’s brother Jerry was the first of the Unsers to compete at Indianapolis. Al’s other brother Bobby, won the Indy three times. Al’s son, Al Junior, won the Indy twice. Al Junior’s son is also a racing driver who competes at the Indy Speedway.

22. Luis who directed “Anaconda,” 1997 : LLOSA
Luis Lllos is a film director from Peru. Llosa’s most famous films are probably “The Specialist” from 1994 and “Anaconda” from 1997. Luis is the cousin of the famous novelist and Nobel Prize winner Mario Vargas Llosa.

“Anaconda” is one of those adventure-horror films, not my favorite genre of cinema. It was released in 1997 and had a big cast that included Jennifer Lopez, Ice Cube, Jon Voight and Owen Wilson. The critics hated it, but the public flocked to see it. Money talks, so three sequels were made.

24. Big shot on Al Jazeera : EMIR
Al Jazeera is an independent news service owned by the state of Qatar. Since 2006, Al Jazeera has been broadcasting an English language channel, hiring many top journalists from American news outlets. “Al jazeera” is Arabic for “the island”.

27. Passé PC piece : CRT
Cathode Ray Tube (CRT) … there aren’t many of them available in stores these days!

39. Many hand-helds, for short : PDAS
A device like perhaps an iPhone, Droid, or Treo can be termed a Personal Digital Assistant (PDA).

41. Flee : LAM
To be “on the lam” is to be in flight, to have escaped from prison. It is American slang that originated at the end of the 19th century. The word “lam” also means to “beat” or “thrash”, as in “lambaste”. So “on the lam” might derive from the phrase “to beat it, to scram”.

Fuller’s Brewery is located in West London, England and was founded in 1845. Fuller’s most famous beer is London Pride, although here in the US we also see Fuller’s ESB quite a lot.

52. They may sit next to castles: Abbr. : KTS
It is believed that the game of chess originated in northwest India, evolving from a 6th-century game called “caturanga”, a Sanskrit word meaning “four divisions”. These four (military) divisions were represented in the game:

55. Aarnio of furniture : EERO
Eero Aarnio is a Finnish interior designer, perhaps most famous for creating those round plastic chairs that hung from the ceiling and were very fashionable in the sixties. It was sort of like sitting inside a big ball.

56. Oilman ___ P. Halliburton : ERLE
Erle P. Halliburton was a businessman who made his fortune in the oil business. Halliburton founded the New Method Oil Well Cementing Company in 1919, which changed its name after his death to Halliburton Company.

60. GPS offerings: Abbr. : RTES
GPS stands for Global Positioning System. The modern GPS system that we use today was built by the US military who received the massive funding needed because of fears during the Cold War of the use of Intercontinental Ballistic Missiles. We civilians, all round the world, owe a lot to President Ronald Reagan because he directed the military to make GPS technology available to the public for the common good. He was moved to do so after the Soviet Union shot down KAL flight 007 carrying 269 people, just because the plane strayed accidentally into Soviet airspace.


61. Old Glory saluter, most likely : US NATIONAL
The person who coined the phrase “Old Glory” with reference to the American flag was Captain William Driver, a ship master from Salem, Massachusetts. As Driver was leaving on an 1831 voyage aboard the brig Charles Doggett, he unfurled the American flag that he had just been given by a group of friends. As the flag caught the breeze, he uttered the words, “Old Glory!”. That’s the story anyway. On that same voyage, Charles Doggett rescued the famous mutineers of the HMS Bounty, after he found them on Pitcairn Island.

62. They broke up in 1991: Abbr. : SSRS
The former Soviet Union (USSR) was created in 1922, not long after the Russian Revolution of 1917 that overthrew the Tsar. Geographically, the new Soviet Union was roughly equivalent to the old Russian Empire, and was comprised of fifteen Soviet Socialist Republics.

Down
1. Big name in relief : ADVIL
Advil and Motrin are brand names for the anti-inflammatory drug ibuprofin.

2. Like wags : DROLL
A “wag” or a “card” is a very amusing person, often quite eccentric.

3. Informal name for a monkey : JOCKO
“Jocko” is a West African name for a chimpanzee.

5. Presidential nickname : CAL
President Calvin Coolidge, the only US President to have been born on July 4th, was known as a man of few words. It was while he was serving as Vice-President to in the administration of Warren G. Harding, that Coolidge earned the nickname “Silent Cal”. There is a famous story told about Coolidge’s reticence that I would love to think is true, attributed to the poet Dorothy Parker. Sitting beside him at dinner, she remarked to him, “Mr. Coolidge, I’ve made a bet against a fellow who said it was impossible to get more than two words out of you.” His famous reply: “You lose …”

26. One of the Gandhis : INDIRA
Indira Gandhi’s father was Jawaharlai Nehru, Prime Minister of India (and the “Nehru” of the Nehru Jacket). Indira herself became Prime Minister in 1966. She was assassinated in 1984 by two of her own bodyguards, as she was walking to meet Peter Ustinov who was about to interview her for Irish television.

30. Journalist who wrote “Come to Think of It,” 2007 : SCHORR
Daniel Schorr was a favorite radio newsman of mine, and I used to listen to him all the time on NPR. Schorr was recruited into the CBS news team by Edward R. Murrow in the fifties. Soon after he was given the job of opening up a CBS news bureau in Moscow, and there obtained an exclusive interview with Nikita Khrushchev, Schorr’s first televised interview. Years later he was hired by Ted Turner and became the first on-camera employee for CNN. In the mid-eighties he was engaged as a news analyst for NPR, a post that he held right up till his death in 2010. Oh, and you might have seen Schorr in the occasional Hollywood movie. For example, he was the newscaster that talked from the television to Michael Douglas in the 1997 film “The Game”.

35. Drying-out danger : DTS
The episodes of delirium that can accompany withdrawal from alcohol are called Delirium Tremens (the DTs). The literal translation of this Latin phrase is “trembling madness”.

36. It was retired by the Yankees in 1986 : ONE
The New York Yankees retired the uniform with the number 1 in 1986, the number worn by second baseman and manager Billy Martin.

38. Powerful Syrian city in the third millennium B.C. : EBLA
Ebla was an ancient city located just southwest of the modern city of Aleppo in Syria.

46. 1972 Elton John hit : LEVON
“Levon” is song recorded by Elton John in 1971. The song was named in honor of the rock group called the Band, a favorite of Elton John and lyricist Bernie Taupin. Levon Helm was a co-founder of the Band. In 2010, Elton John named his son “Zachary Jackson Levon Furnish-John”.

47. Hanover’s river : LEINE
The Leine is a river in Thuringia and Lower Saxony in Germany. The biggest city built on the banks of the Leine is Hanover.

The German city of Hanover is the capital of Lower Saxony in northern Germany. Hanover is host to Oktoberfest Hannover, the second largest Oktoberfest in the world.

53. It follows a mine line : TRAM
Some trams run on rail lines in mines.