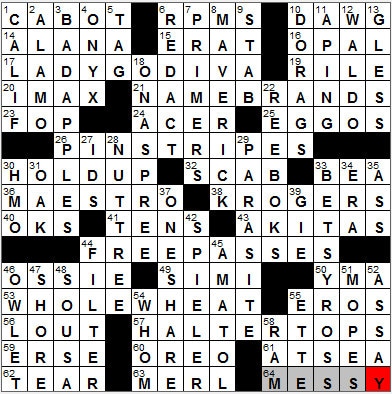 
Today’s Wiki-est, Amazonian Googlies
Across
1. Contemporary of Columbus : CABOT
Giovanni Caboto (known in English as “John Cabot”) was an Italian explorer. Cabot is believed to have been the first European to visit North America since the Vikings landed here in the 11th century. Many say that he landed in Newfoundland in 1497.

16. Stone for a Libra, traditionally : OPAL
Here is the “official” list of birthstones by month, that we tend to use today:

17. One barely riding? : LADY GODIVA
In the legend of Lady Godiva, a noblewoman rode naked through the streets of Coventry in England, basically as a dare from her husband in return for relieving the taxes of his tenants. Lady Godiva issued instructions that all the town’s inhabitants should stay indoors while she made her journey. However, a tailor in the town named Tom disobeyed the instructions by boring holes in the shutters on his windows, and “peeped”. As a result, Peeping Tom was struck blind, and the term “peeping Tom” has been in our language ever since.

20. Choice for a huge movie fan? : IMAX
The IMAX Corporation, which is behind the IMAX film format, is a Canadian company. The impetus for developing the system came after Expo ’67 in Montreal. Back then large format screenings were accomplished using multiple projectors with multiple screens, with images basically stitched together. The team behind the IMAX technology set out to simplify things and developed a single-camera, single-projector system.

24. TravelMate notebook maker : ACER
I am typing away right now in an Acer laptop, for my money the most reliable machine at the best price. Acer is a Taiwanese company that I used to visit a lot when I was in the electronics business. I was very impressed with the company’s dedication to quality, and haven’t been let down since.

25. Food items once called Froffles : EGGOS
Eggo is the brand name of a line of frozen waffles made by Kellogg’s. When they were introduced in the 1930s, the name “Eggo” was chosen to promote the “egginess” of the batter. “Eggo” replaced the original name chosen, which was “Froffles”, created by melding “frozen” and “waffles”.

26. Pattern seen on a diamond : PINSTRIPES
The Chicago Cubs was the first professional baseball team to incorporate pinstripes into the design of the players’ uniforms.

33. Lillie with a Tony : BEA
Bea Lillie was an actress from Toronto, Ontario. Lillie moved to England as a young girl, and there married a baronet, Sir Robert Peel. So in her private life, Bea Lille was known as Lady Peel.

36. Leader in music : MAESTRO
“Maestro” is often used to address a musical conductor. “Maestro” is the Italian word for “master”.

43. Husky alternatives : AKITAS
The Akita breed of dog is named for its point of origin, the Akita Prefecture in Japan. When Helen Keller visited Japan in 1937, she asked for and was given an Akita breed of dog, with the name of Kamikaze-go. Sadly, the dog died within a year from distemper. The following year the Japanese government officially presented Keller with a replacement dog. Supposedly Keller’s dogs were the first members of the breed to be introduced into the US.

English sailors used to call Arctic people “Huskimos”, their take on the word “Eskimos”. The dogs kept by “Huskimos” came to be known as “Huskies”.

49. Sonoma County winery : SIMI
The Simi Winery in Sonoma County, California was founded way back in 1876 by two brothers from Italy: Giuseppe and Pietro Simi. The winery was first located in San Francisco, but has been in Healdsburg, California since 1881.

55. Heart-piercing figure : EROS
As always seems to be the case with Greek gods, Eros and Aphrodite have overlapping spheres of influence. Aphrodite was the goddess of love between a man and a woman, and Eros was the god who stirred the passions of the male.

60. ___ Blizzard (Dairy Queen offering) : OREO
The Oreo was the best-selling cookie in the 20th century, and almost 500 billion of them have been produced since they were introduced in 1912 by Nabisco. In those early days the creme filling was made with pork fat, but today vegetable oils are used instead. If you take a bite out of an Oreo sold outside of America you might notice a difference from the homegrown cookie, as coconut oil is added in the overseas version to give a different taste.

63. Keyboardist Saunders : MERL
Merl Saunders was a piano and keyboard musician. Saunders was good friends with Jerry Garcia and often played with the Grateful Dead.

Down
1. Rialto setting: Abbr. : CALIF
The city of Rialto, California is in San Bernadino County.

2. Crockett Hotel’s neighbor : ALAMO
The famous Alamo in San Antonio, Texas was originally known as Mission San Antonio de Valero. The mission was founded in 1718, and was the first mission established in the city. The Battle of the Alamo took place in 1836, a thirteen-day siege by the Mexican Army led by President General Antonio Lopez de Santa Anna. Only two people defending the Alamo Mission survived the onslaught. One month later, the Texian army got its revenge by attacking and defeating the Mexican Army in the Battle of San Jacinto. During the surprise attack on Santa Anna’s camp, many of the Texian soldiers were heard to cry “Remember the Alamo!”.

The Crockett Hotel is in San Antonio, Texas and is named for Davy Crockett who died defending the Alamo.

The pioneer Davy Crockett is often referred to as “King of the Wild Frontier”. Crockett was from East Tennessee, and after serving in the local militia he entered politics and represented his state in the US House of Representatives from 1827 to 1831. Crockett disapproved of many of the policies of President Andrew Jackson, which led to Crockett’s defeat in the 1834 election for the House. The defeat prompted Crockett to leave Tennessee for Texas. Famously, he died there in 1836 at the Battle of the Alamo.

4. Stone for a Cancer, traditionally : ONYX
Onyx is a form of quartz that comes in many different shades, but most often it’s the black version that’s used for jewelry. The name “onyx” comes from the Greek word for “fingernail”, as onyx in the flesh color is said to resemble a fingernail.

6. Ready for publication : REDACT
Our word “redact”, meaning to revise or edit, comes from the past participle of the Latine “redigere” meaning “to reduce”.

8. Sarah Palin, self-descriptively : MAVERICK
The concept of being one’s own person, going it alone, is popularly known as being a “maverick”. In the days of open range ranching, a maverick was a steer that didn’t carry a brand. An unbranded animal was usually the result of a branded animal giving birth on the open range, with the young growing up without having being captured and claimed by an owner. The use of the name “maverick” comes from a Texas rancher, Samuel Maverick, who refused to brand his cattle. He stated that he did not want to inflict pain on his cattle, and so laid claim to any cattle on the range that weren’t branded. His stubborn refusal to cooperate with the neighboring ranchers gave rise to our modern description of a single-minded individual as a “maverick”.

10. Wear banned in many schools : DO-RAGS
Hip-hoppers might wear do-rags today, but they have been around for centuries. If you recall the famous image of Rosie the Riveter, she was wearing a do-rag. The etymology is pretty transparent, a piece of cloth (rag) to hold a hairstyle (do) in place.

12. One hard to find : WALDO
The reference is to the series of children’s illustrated books called “Where’s Waldo?”, originally titled “Where’s Wally?” in Britain where the books originated.

22. Alternatives to Filas : REEBOKS
The brand name Reebok was adopted as the new company name for Foster Shoes of the UK in 1960. The name Reebok (more commonly “Rhebok”) is an Afrikaans word for an antelope, and comes from the term “roe buck”.

Fila was originally an Italian company, founded in 1911, but is now based in South Korea. Fila was started in Piedmont by the Fila brothers, primarily to make underwear that they sold to people living in the Italian Alps. The company started to focus on sportswear in the seventies, using tennis-great Bjorn Borg as their major endorser.

31. Rendering on Connecticut’s state quarter : OAK
The oak depicted on the Connecticut quarter is the Charter Oak. The tree earned its name from the legend that the original Royal Charter for the colony was hidden in a cavity of the tree for a while. The tree no longer exists, as it went down in a storm in the early 1800s.

33. A 1952 3-cent stamp honored her 200th birthday : BETSY ROSS
Legend has it that Betsy Ross made the first American flag for General George Washington. However, this story only surfaced during the centennial celebrations of 1876, and although Betsy Ross was indeed one of several flag makers in Philadelphia in the days of George Washington, sadly there’s no definitive evidence that Ross provided that first stars and stripes.

39. Grant, in Glasgow : GIE
Gie is a variant of “give” used sometimes by Scots.

Glasgow is the largest city in Scotland and sits on the River Clyde. Back in the Victorian Era Glasgow earned a reputation for excellence in shipbuilding and was known as “Second City of the British Empire”. Glasgow shipyards were the birthplaces of such famous vessels as the Lusitania, the Queen Mary and the Queen Elizabeth.

42. Pitching ace? : SPIELER
A spiel is a lengthy speech or argument designed to persuade, perhaps a sales pitch. “Spiel” comes to us from German, either directly (“spiel” is the German for “play”) or via the Yiddish “shpil”.

45. Powerful explosive : AMATOL
Amatol is a mixture of TNT and ammonium nitrate. Amatol is no longer used today, but featured extensively in the two world wars. TNT, which was relatively costly, was able to “go further” with the addition of cheaper ammonium nitrate (fertilizer) with very little degradation in destructive power.

48. “The Liberty Bell” composer : SOUSA
John Philip Sousa was a composer and conductor from Washington, D.C. Sousa was well known for his patriotic marches and earned himself the nickname “The American March King”. He served as a member of the US Marine Band from 1868 to 1875, and after leaving the Marines learned to conduct and compose. One of the Sousa compositions that is well-known around the world is called “The Liberty Bell”, a tune used as the musical theme for BBC Television’s “Monty Python’s Flying Circus”.