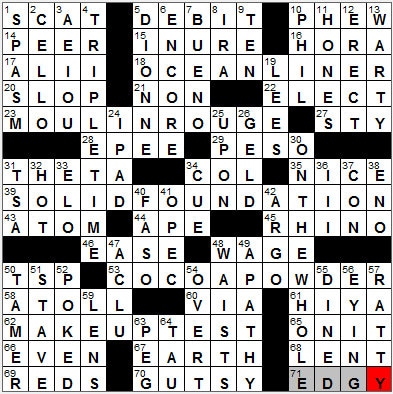 CROSSWORD SETTER: Gareth Bain
THEME: Make Up … all of the theme answers have two words, the second being a make up item:

18A. Luxury craft crossing the Atlantic, say : OCEAN LINER
23A. Paris cabaret : MOULIN ROUGE
39A. Good grounding : SOLID FOUNDATION
53A. Spooned-out Nestlé product : COCOA POWDER
62A. What this crossword is, in a way? : MAKE-UP TEST


Today’s Wiki-est, Amazonian Googlies
Across
1. “Shoo, kitty!” : SCAT
Our word “scat” comes from a 19th-century expression “quicker than s’cat”, which meant “in a great hurry”. The original phrase probably came from the words “hiss” and “cat”.

16. Jewish wedding dance : HORA
The hora (also “horah”) is a circle dance that originated in the Balkans. The hora was brought to Israel by Romanian settlers, and is often performed to traditional Israeli folk songs. The dance is a regular sight at Jewish weddings.

21. ___ sequitur : NON
We use the Latin term “non sequitur” to describe an illogical statement, usually irrelevant to what has immediately preceded. The literal translation of “non sequitur” is “it does not follow”.

23. Paris cabaret : MOULIN ROUGE
The Moulin Rouge cabaret is located right in the middle of one of the red light districts of Paris, the district of Pigalle. You can’t miss it, as it has a huge red windmill on its roof (the French for “red windmill” is “moulin rouge”). The Moulin Rouge opened its doors in 1889, and soon after the working girls of the cabaret adopted a “respectable” party dance and used it to entice their clients. That was the birth of the can-can. Nowadays, the Moulin Rouge is home to a lavish, Las Vegas-style show that costs millions of euros to stage. It features showgirls, dancers and acrobats, a whole host of entertainers in fact. And I am sure the can-can features as well …

28. Weapon for fencing : EPEE
The French word for sword is épée. In competitive fencing the épée is connected to a system that records an electrical signal when legal contact is made on an opponent’s body.

29. Shekel : Israel :: ___ : Mexico : PESO
The coin called a “peso” is used in many Spanish-speaking countries around the world. The coin originated in Spain where the word “peso” means “weight”. The original peso was what we know in English as a “piece of eight”, a silver coin of a specific weight that had a nominal value of eight “reales”.

The shekel is the currency used today in Israel. The first use of the word “shekel” was in Mesopotamia around 3000 BCE when it probably referred to a specific weight of barley.

31. Letter before iota : THETA
The Greek letter theta is the one that looks like a number zero with a horizontal line in the middle.

Iota is the ninth letter in the Greek alphabet. We use the word “iota” to portray something very small as it is the smallest of all Greek letters.

34. ___ Mustard (Clue character): Abbr. : COL
Colonel Mustard is one of the suspects in the board game “Clue”.

Clue is another board game that we knew under a different name growing up in Ireland, as outside of North America Clue is marketed as “Cluedo”. Cluedo was the original name of the game, introduced in 1949 by the famous British board game manufacturer, Waddingtons. There are cute differences between the US and UK versions. For example, the man who is murdered is called Dr. Black (Mr. Boddy in the US), one of the suspects is the Reverend Green (Mr. Green in the US), and the suspect weapons include a dagger (a knife in the US), a lead pipe (lead piping in the US) and a spanner (a wrench in the US). I think it’s a fabulous game, a must during the holidays …

35. Not naughty : NICE
Santa is at the North Pole when he checks his list of those who are naughty or nice.

45. Heavy zoo critter : RHINO
There are five types of rhinoceros that survive today, and the smaller Javan Rhino is the most rare. The rhinoceros is probably the rarest large mammal on the planet, thanks to poaching. Hunters mainly prize the horn of the rhino as it is used in powdered form in traditional Chinese medicine.

53. Spooned-out Nestlé product : COCOA POWDER
Nestlé is the world’s largest food company. Nestlé was founded in 1905 in Vevey, Switzerland where the company headquarters is to this day. Although the company came into being as the result of a merger, it retains the name of one of the co-founders, German confectioner Henri Nestlé. Henri Nestlé’s breakthrough product was baby formula.

58. Many a South Seas island : ATOLL
An atoll is a coral island that is shaped in a ring and enclosing a lagoon. There is still some debate as to how an atoll forms, but a theory proposed by Charles Darwin while on his famous voyage aboard HMS Beagle still holds sway. Basically an atoll was once a volcanic island that had subsided and fallen into the sea. The coastline of the island is home to coral growth which persists even as the island continues to subside internal to the circling coral reef.

69. Cincinnati team : REDS
The Red Scare (i.e. anti-communist sentiment) following WWII had such an effect on the populace that it even caused the Cincinnati baseball team to change its name from the Reds. The team was called the Cincinnati Redlegs from 1953-1958, as the management was fearful of losing money due to public distrust of any association with “Reds”.

Down
2. Instrument played with a bow : CELLO
The word “cello” is an abbreviation for “violoncello”, an Italian word for “little violone”, referring to a group of stringed instruments that were popular up to the end of the 17th century. The name violoncello persisted for the instrument that we know today, although the abbreviation ‘cello was often used. Nowadays we just drop the apostrophe.

5. “Walk On By” singer Warwick : DIONNE
Dionne Warwick is a very, very successful singer, with more Top 100 hits than any other female vocalist other than Aretha Franklin. Warwick had a pretty successful cousin too: Whitney Houston …

7. Good, in Granada : BUENO
Granada is a city and province in Andalusia in the south of Spain.

8. Levin or Gershwin : IRA
As well as writing novels, Ira Levin was a dramatist and a songwriter. Levin’s first novel was “A Kiss Before Dying”, and his most famous work was “Rosemary’s Baby” which became a Hollywood hit. His best known play is “Deathtrap”, a production that is often seen in local theater (I’ve seen it a couple of times around here). “Deathtrap” was also was a successful movie, starring Michael Caine and Christopher Reeve. My favorite of Levin novels though are “The Boys from Brazil” and “The Stepford Wives”.

Ira Gershwin was the lyricist who worked with his brother George to create such American classics as the songs “I Got Rhythm” and “Someone to Watch Over Me”, and the opera “Porgy and Bess”. After his brother died, Ira continued to create great music, working with the likes of Jerome Kern and Kurt Weill.

10. Punxsutawney ___ (annual spring forecaster) : PHIL
Punxsutawney is a borough in Pennsylvania, located about 80 miles northeast of Pittsburgh. Punxsutawney Phil is the famous groundhog that lives in the area. Phil comes out of his hole on February 2 each year and if he sees his shadow he goes back into his hole predicting six more weeks of winter weather. February 2 is known as Groundhog Day.

19. Cask dregs : LEES
The dregs in wine, the sediment that settles during fermentation (and sometimes in the bottle), is also called “lees”.

24. Portable Apple device : IPAD
The very exciting iPad isn’t Apple’s first foray into the world of tablet computing. Apple created great buzz by introducing the Newton MessagePad way back in 1993. This innovative machine was fraught with problems and really died a very slow death, finally being withdrawn from the market in 1998.

26. Desex, as a stallion : GELD
We can use the verb “to geld” to mean “to weaken, deprive of strength”. The term comes from the act of gelding an animal, castration of the male. “Geld” comes from the Old Norse word “gelda” meaning “castrate”.

31. Org. conducting airport searches : TSA
The Transportation Security Administration (TSA) was of course created in 2001, soon after the 9/11 attacks.

33. “Livin’ Thing” rock grp. : ELO
The Electric Light Orchestra (ELO) is a symphonic rock group from the north of England. The band’s manager was Don Arden, father of Sharon Osbourne (wife of Ozzy).

34. Pool stick : CUE
The more correct name for the game of pool is pocket billiards. The name “pool” came after pocket billiards became a common feature in “pool halls”, places where gamblers “pooled” their money to bet on horse races.

36. “East” on a grandfather clock : III
There are several sizes of “longcase clocks”, tall, freestanding clocks driven by a pendulum swinging inside a tower below the clock face. A longcase clock over 6 feet tall is called a grandfather, and one below five feet is a granddaughter, One that falls between five and six feet is known as a grandmother. The name of the clock derives from an 1876 song called “My Grandfather’s Clock”.

38. Rock producer Brian : ENO
Brian Eno started out his musical career with Roxy Music. However, his most oft-played composition (by far!) is Microsoft’s “start-up jingle”, the 6-second sound you hear when the Windows operating system is booting up.

40. Burkina ___ (African land) : FASO
Burkina Faso is an inland country in west Africa. The country used to be called the Republic of Upper Volta and was renamed in 1984 to mean “the land of upright people”.

41. Oil cartel : OPEC
The OPEC cartel (the Organization of the Petroleum Exporting Countries) was formally established in 1960 and has been headquartered in Vienna since 1965. The US is actually the third largest oil producer in the world (after Russia and Saudi Arabia). One reason America isn’t in OPEC, even though we are a big producer, is that we import a lot more than we export. But you probably knew that already …

42. Jason’s ship : ARGO
In Greek mythology, Jason and the Argonauts sailed on the Argo in search of the Golden Fleece. The vessel was called the “Argo” in honor of the ship’s builder, a man named Argus.

47. Rights grp. : ACLU
The American Civil Liberties Union (ACLU) has its roots in the First World War, when it was founded to provide legal advice and support to conscientious objectors.

51. Barrel support : STAVE
The word “stave” was originally the plural of “staff”, a wooden rod. To “stave off” originated with the concept of holding off with a staff. In the world of barrel-making, a stave is a narrow strip of wood that forms part of a barrel’s sides.

64. Greek cross : TAU
Tau is the 19th letter of the Greek alphabet, the letter which gave rise to our Roman “T”. Both the letters tau (T) and chi (X) have long been symbolically associated with the cross.