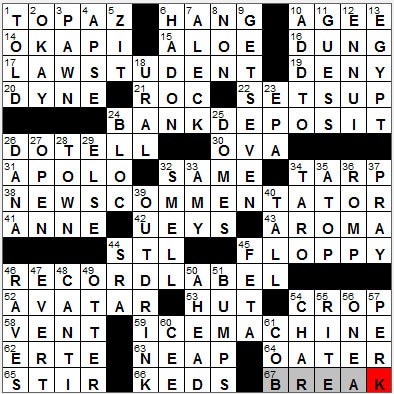 CROSSWORD SETTER: C. W. Stewart
THEME: What One Can BREAK … each of the theme answers is composed of two words, the first of which is something that can be broken:


Today’s Wiki-est, Amazonian Googlies
Across
1. Birthstone that was the name of a Hitchcock film : TOPAZ
“Topaz” is a Hitchcock film released in 1969. “Topaz” is a Cold War spy story based on the book of the same name by the great Leon Uris. This film is a little unusual for a Hitchcock work as it doesn’t feature a big Hollywood name, and it wasn’t particularly well received at the box office.

10. Writer James : AGEE
James Agee was a noted American film critic. Agee wrote an autobiographical novel “A Death in the Family” that won him his Pulitzer in 1958, albeit posthumously.

14. Relative of a giraffe : OKAPI
The okapi is closely related to the giraffe, although it does have markings on its legs and haunches that resemble those of a zebra. The okapi’s tongue is long enough to reach back and wash its eyeballs, and can even go back further and clean its ears inside and out.

15. ___ vera : ALOE
Aloe vera has a number of alternate names that are descriptive of its efficacy as a medicine. These include the First Aid plant, Wand of Heaven, Silent Healer and Miracle Plant.

16. ___ beetle : DUNG
Dung beetles take their name from their food source, animal dung. Some species of dung beetle were revered in ancient Egypt, with one species being known as the sacred scarab.

20. Unit of force : DYNE
An erg is a unit of energy or mechanical work. “Erg” comes from the Greek word “ergon” meaning “work”. A dyne is a unit of force. The name “dyne” comes from the Greek “dynamis” meaning “power, force”. Ergs and dynes are related to each other in that one erg is the amount of energy needed to move a force of one dyne over a distance of one centimeter.

21. “Arabian Nights” bird : ROC
The mythical roc is a huge bird of prey, reputedly able to carry off and eat elephants.

24. Transaction at Chase or Wells Fargo : BANK DEPOSIT
The original Chase National Bank was formed in 1877. Although he had no connection with the bank, it was named for the former US Treasury Secretary Salmon P. Chase.

Back in the mid-1800s, Henry Wells founded an express package delivery service called Wells and Company. Around the same time, William Fargo founded Fargo and Company as a competitor. The two decided to join forces instead of competing, and took on a partner and formed the American Express Company (that is still around today). Fargo and Wells then decided to set up a company in California to provide express delivery and banking services, a company they called Wells Fargo.

31. Speed skater ___ Anton Ohno : APOLO
Apolo Ohno has won more Winter Olympics medals than any other American. Ohno also did a great job winning the 2007 season of television’s “Dancing with the Stars”.

34. Field cover during a rain delay : TARP
Originally, tarpaulins were made from canvas covered in tar that rendered the material waterproof. The word “tarpaulin” comes from “tar” and “palling”, with “pall” meaning “heavy cloth covering”.

38. Rachel Maddow or Rush Limbaugh : NEWS COMMENTATOR
You used to be able to listen to “The Rachel Maddow Show” on Air America Radio before the radio station went bust, Now you can see Maddow on a TV show with the same name, every night on MSNBC. She is the first openly gay anchor to host a prime-time news program in the US.

Rush Limbaugh is an extremely successful radio talk show host, one with very conservative views. I wouldn’t be a huge fan …

41. Queen with a “lace” : ANNE
What we call “Queen Anne’s Lace” over here in the US is known by many in the British Isles as the “wild carrot”. The roots of Queen Anne’s Lace are indeed edible, just like carrots, but only when they are very young because later in life they get very woody. The wild carrot was given the name Queen Anne’s Lace when it was introduced into America as the flowers do resemble white lace. There is one small red flower in the center of the plant which is said to be a drop of blood that Queen Anne spilled when she pricked herself as she was making the lace.

44. Letters on a Cardinal’s cap : STL
The St. Louis Cardinals were originally called the “Brown Stockings”, changing their name to the “Perfectos” in 1899. That name change obviously didn’t go down well with the locals, as the owners changed it one year later to the Cardinals.

45. Kind of disk : FLOPPY
I don’t think my kids really know what a floppy disk is. A floppy disk is made up of a thin and flexible magnetic material that can store data, enclosed in a protective case. I’ve used 8-inch floppies in my time, and many 5.25-inch floppy disks. I still have a desk top that will take 3.5-inch disks, although I don’t think there is a 3.5-inch floppy anywhere in the house.

46. Def Jam or EMI : RECORD LABEL
Def Jam is a US record label, one focused on producing hip hop music.

EMI is a British music company, with the acronym originally standing for Electric and Musical Industries.

52. 2009 film that grossed over two billion dollars : AVATAR
I went to the 3D version of “Avatar” when I saw it for the first time … it really is the only way to see that movie!

64. Western, in old slang : OATER
The term “oater”, used for a western movie, comes from the number of horses seen, and horses love oats!

66. Sneakers brand : KEDS
Keds is a brand name of athletic shoe first introduced in 1916 by US Rubber. The shoe was marketed as a rubber-soled, canvas-topped sneaker.

Down
3. Lowly chess piece : PAWN
It is believed that the game of chess originated in northwest India, evolving from a 6th-century game called “caturanga”, a Sanskrit word meaning “four divisions”. These four (military) divisions were represented in the game:

4. Cathedral area : APSE
The apse of a church or cathedral is a semicircular recess in an outer wall, usually with a half-dome as a roof and often where there resides an altar. Originally apses were used as burial places for the clergy and also for storage of important relics.

5. Acne spot : ZIT
The slang term “zit”, meaning “a pimple”, came into the language in 1966, but no one seems to know its exact derivation.

7. Smart ___ (wise guy) : ALECK
Apparently the original “smart Alec” was Alec Hoag, a pimp, thief and confidence trickster who plied his trade in New York City in the 1840s.

11. Jeans brand with a question mark in its logo : GUESS
GUESS? is a company producing a whole line of clothing, although it was originally very much associated with the production of denim jeans.

12. Ho-hum feeling : ENNUI
“Ennui” is the French word for boredom, a word that we now use in English. It’s one of the few French words we’ve imported that we haven’t anglicized and actually pronounce “correctly”.

18. Russia’s ___ Mountains : URAL
The eastern side of the Ural Mountains in Russia is generally regarded as the natural divide between the continents of Europe and Asia.

23. Green org. : EPA
The Environmental Protection Agency (EPA) was set up during the Nixon administration and began operation at the end of 1970.

24. Political coalition : BLOC
“Bloc” is the French word for “block”.

26. Comic Carvey : DANA
Dana Carvey, along with the likes of Phil Hartman and Kevin Nealon, was part of the new breed of “Saturday Night Live” comedians accredited with resurrecting the show in the late eighties. One of Carvey’s most popular characters was the Church Lady, and he became so associated with her that among fellow cast members Carvey was often referred to simply as “the Lady”. Carvey had open-heart surgery in 1997 to clear a blocked artery, but the surgical team operated on the wrong artery. To recover, he had to have five more procedures so ended up suing for medical malpractice. Carvey donated the $7.5 million compensation payment to charity.

33. Poehler of “Parks and Recreation” : AMY
Amy Poehler was a cast member on “Saturday Night Live” from 2001 to 2008, notable for appearing in many great sketches, including those where she played Hillary Clinton opposite Tina Fey’s Sarah Palin. Poehler also starred with Fey in the 2008 movie “Baby Mama”, and now has her own show on NBC called “Parks and Recreation”.

34. Poi source : TARO
The corm of some taro plants is used to make poi, the traditional Hawaiian dish (that I think tastes horrible). When a taro plant is grown as an ornamental, it is often called Elephant Ears due to the shape of its large leaves.

37. Recite the rosary, e.g. : PRAY
The Rosary is a set of prayer beads used in the Roman Catholic tradition. The name “Rosary” comes from the Latin “rosarium”, the word for a “rose garden” or a “garland of roses”. The term is used figuratively, in the sense of a “garden of prayers”.

45. Cheese in a Greek salad : FETA
Feta is a Greek cheese made from sheep’s milk, or a mixture of sheep’s and goat’s milk. The cheese is salted and cured in a brine solution for several months before it is eaten.

46. All-night parties : RAVES
As you might imagine, I’ve never been to a rave, and don’t have one upcoming in my diary. And as they can start at 2 a.m. then I’m unlikely ever to experience one. A rave is generally an all-night party featuring loud, electronically synthesized music that’s usually played by a DJ as opposed to a live band.

47. Chris who won six U.S. Opens : EVERT
Chris Evert is a former professional tennis player from Fort Lauderdale, Florida. Evert has the best winning percentage in professional tennis, man or woman worldwide, losing less than 10% of all her matches.

49. Playful swimmer : OTTER
The fur of the sea otter is exceptionally thick. It is in fact the densest fur in the whole animal kingdom.

51. Hits in dodgem cars : BUMPS
“Dodgems” is the term used in the British Isles for bumper cars.

55. Bar mitzvah or communion : RITE
A Jewish girl becomes a Bat Mitzvah at 12 years of age, the age at which she becomes responsible for her actions. Boys become Bar Mitzvahs at 13. The terms translate into English as daughter and son of the commandments.

The Communion rite is the part of the Mass, in the Roman Catholic tradition.

56. Prime draft classification : ONE-A
The US government maintains information on all males who are potentially subject to military conscription using what is called the Selective Service System (SSS). In the event that a draft is held, men registered would be classified into groups to determine eligibility for service. Class 1-A registrants are those available for unrestricted military service. Other classes are 1-A-O (conscientious objectors available for noncombatant service), 4-A (registrants who have completed military service) and 4-D (ministers of religion).