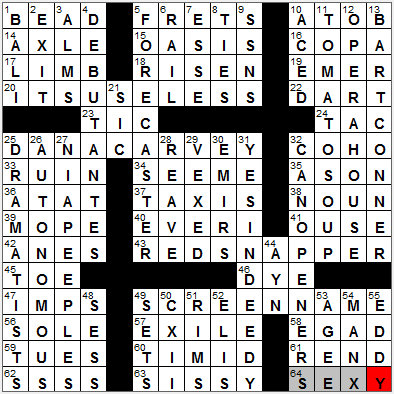 CROSSWORD SETTER: Joe Krozel
THEME: TIC-TAC-TOE … today’s grid is meant to remind us of a tic-tac-toe grid. Each of the nine squares of the tic-tac-toe grid contains either an X or an O, but not both:


Today’s Wiki-est, Amazonian Googlies
Across
5. They’re seen on the neck : FRETS
A fret is a metal strip embedded in the neck of a stringed instrument, like a guitar perhaps. The fingers press on the frets, shortening the string and hence changing the note played. The note increases by one semitone as a finger shorten a string by one fret.

15. Caravan parking spot? : OASIS
The most famous oasis in the US is … Las Vegas, in the middle of the Mojave Desert.

“Caravan” derives from the Persian “karwan”, a word for a group of desert travelers. Over in the British Isles, “caravan” is the name we give to travel trailers.

16. Club of song : COPA
The Copacabana of song is the Copacabana nightclub in New York City (which is also the subject of the Frank Sinatra song “Meet Me at the Copa”). The Copa opened in 1940, and is still going today although it is struggling. The club had to move due to impending construction and is now “sharing” a location with the Columbus 72 nightclub.

19. Part of FEMA: Abbr. : EMER
Federal emergency management has been structured for over 200 years, but what we know today as the Federal Emergency Management Agency (FEMA) was created in 1979 in an Executive Order issued by President Jimmy Carter.

25. Imitator of Bush the elder on “S.N.L.” : DANA CARVEY
Dana Carvey, along with the likes of Phil Hartman and Kevin Nealon, was part of the new breed of “Saturday Night Live” comedians accredited with resurrecting the show in the late eighties. One of Carvey’s most popular characters was the Church Lady, and he became so associated with her that among fellow cast members Carvey was often referred to simply as “the Lady”. Carvey had open-heart surgery in 1997 to clear a blocked artery, but the surgical team operated on the wrong blood vessel. To recover, he had to have five more procedures. He ended up suing for medical malpractice and donated his $7.5 million compensation payment to charity.

32. Salmon variety : COHO
The Coho salmon is silver along the side of its body, but only during the phase of its life while it is in the ocean. When spawning and heading up into a freshwater river, the Coho has bright red sides.

So Boaz took Ruth, and she became his wife. And he went in to her, and LORD gave her conception, and she bore a son.

38. Mad Libs specification : NOUN
Mad Libs is a word game, usually played by American kids. The idea is that one player provides a list of words which are then inserted into blank spots in a story, usually with hilarious results (they say!).

41. River of York : OUSE
York is the biggest city on the River Ouse in Yorkshire. The name “Ouse” comes from the Celtic word “usa” meaning water.

42. Chemical suffixes : -ANES
The “smaller” alkanes are gases and are quite combustible. Methane (CH4) is the main component of natural gas with ethane (C2H6) being the second largest component. Propane (C3H8) is another component of natural gas and is heavy enough to be readily turned into a liquid by compression, for ease of transportation and storage. Butane (C4H10) is also easily liquefied under pressure and can be used as the fuel in cigarette lighters or as the propellant in aerosol sprays. The heavier alkanes are not gases, and instead are liquids and solids at room temperature.

43. Common restaurant fish : RED SNAPPER
The red snapper that we get in restaurants is often not the true “red snapper” species (Lutjanus campechanus). Frequently we are served other snapper species or rockfish, in order to meet demand.

56. Common restaurant fish : SOLE
The group of flatfish known as soles take their name from “solea”, the Latin word for “sandal”.

58. Old-timey oath : EGAD
“Egad” developed as a polite way of saying “oh God” in the late 1600s and is an expression of fear or surprise somewhat like “good grief!”.

Down
1. Island with a Hindu majority : BALI
Bali is the most important tourist destination in Indonesia, and is an island lying east of Java. In recent years that tourist industry has been badly hit, due to two terrorist bombings. The first one, in 2002, killed 202 people, mainly foreign tourists in a nightclub.

9. Employee data: Abbr. : SSNS
The main purpose of a Social Security Number (SSN) is to track individuals for the purposes of taxation, although given its ubiquitous use, it is looking more and more like an “identity number” to me. The social security number system was introduced in 1936. Prior to 1986, an SSN was required only for persons with substantial income so many children under 14 had no number assigned. For some years the IRS had a concern that a lot of people were claiming children on their tax returns who did not actually exist. So, from 1986 onward, it is a requirement to get an SSN for any dependents over the ago of 5. Sure enough, in 1987 seven million dependents “disappeared”.

11. Classic Andy Warhol subject : TOMATO SOUP
Andy Warhol went through a period of painting iconic American products, including Coca-Cola bottles and Campbell’s tomato soup cans. In 1964 he participated in a gallery show called “The American Supermarket”. Along with other pop artists he contributed works including a painting of a can of Campbell’s tomato soup. He priced the painting at $1,500, and sold autographed cans of soup for $6 a piece.

13. 1984 U.S. Olympic gold medalist in gymnastics : BART CONNER
Bart Conner is a US gymnast who won gold in the 1984 Olympic Games. Conner is married to the great Romanian gymnast Nadia Comăneci.

30. Gulf moguls : EMIRS
An emir is a prince or chieftain, most notably in the Middle East. In English, “emir” can also be written as “amir” and “ameer” (watch out for those spellings in crosswords!).

44. Objectivist Rand : AYN
Ayn Rand was a Russian-American novelist born Alisa Rosenbaum. Rand’s two best known works are her novels “The Fountainhead” published in 1943 and “Atlas Shrugged” in 1957. Back in 1951, Rand moved from Los Angeles to New York City. Soon after, she gathered a group of admirers around her with whom she discussed philosophy and shared drafts of her magnum opus, “Atlas Shrugged”. This group called itself “The Collective”, and one of the founding members was none other than future Federal Reserve chairman, Alan Greenspan.

49. They usually end at six : SETS
A set of tennis usually ends when one player gets to six games won.

52. New Haven alumni : ELIS
Eli is the nickname for a graduate of Yale University, a term used in honor of the Yale benefactor Elihu Yale.

Yale is the private, Ivy League school located in New Haven, Connecticut. Yale was founded in 1701, making it the third-oldest, higher education establishment in the country (after Harvard, and William and Mary).

53. Writer James : AGEE
James Agee was a noted American film critic. Agee wrote an autobiographical novel “A Death in the Family” that won him his Pulitzer in 1958, albeit posthumously.