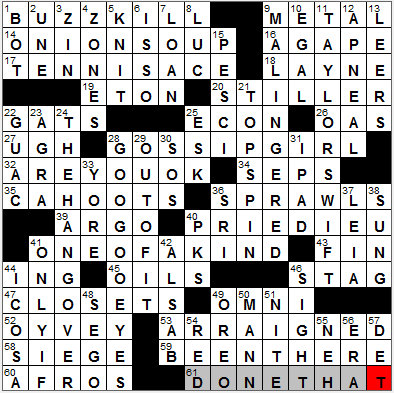 
Today’s Wiki-est, Amazonian Googlies
Across
9. Founding need : METAL
“To found” is to melt metal and pour it into a mold in order to make molded metal objects.

14. It often has a crust on top : ONION SOUP
To cook “au gratin” is to prepare something in a shallow dish with a crust of bread or cheese on top. In American we tend to think mainly of potatoes prepared this way, but the technique can be used for many different dishes. Notably, what we call French onion soup, is called a “gratiné” in France, an onion soup with some bread and cheese baked on top.

18. Football Hall of Famer Bobby : LAYNE
Bobby Layne was a quarterback who played in the NFL. The Detroit Lions traded Layne to the Pittsburgh Steelers in 1958, much to Layne’s chagrin. He supposedly put a “curse” on the Lions as a result. The Lions are one of the few teams that have never played in a Super Bowl, something that some attribute to “the Curse of Bobby Layne”.

19. Captain Hook’s alma mater : ETON
Captain Hook is the bad guy in “Peter Pan”, the famous play by J. M. Barrie. Hook is Peter Pan’s sworn enemy, as Pan cut off Hook’s hand causing it to be replaced by a “hook”. It is implied in the play that Hook attended Eton College, just outside London. Hook’s last words are “Floreat Etona”, which is Eton College’s motto.

20. “Tropic Thunder” director and co-star : STILLER
Ben Stiller is the son of actors Jerry Stiller and Anne Meara. Ben is perhaps as well-known as a director as he is an actor. He made his debut as a director in the film “Reality Bites” in 1994.

“Tropic Thunder” is a satirical action movie written, produced and directed by Ben Stiller. On top of all that, he stars in the film as well, alongside Jack Black and Robert Downey, Jr.

22. Street heaters : GATS
“Gat” is a slang term for a gun, derived from the Gatling gun, the precursor to the modern machine gun. The Gatling gun was invented by Dr. Richard J. Gatling in 1861. Apparently he was inspired to invent it so that one man could do as much damage as a hundred, thereby reducing the size of armies and diminishing the suffering caused by war. Go figure …

25. Growth theory subj. : ECON
Growth Theory is a subject in the field of economics …

26. Mex. and Uru. are in it : OAS
The Organization of American States (OAS) has its headquarters in Washington, D.C. All the independent states in the Americas are members of the group except Honduras, which had her membership suspended after the country’s 2009 coup.

28. Teen series whose title character is never seen : GOSSIP GIRL
“Gossip Girl” is a series of young adult novels by American author Cecily von Ziegesar. The Gossip Girl in the title is the narrator of the tale, a gossip blogger who recounts the experiences of two friends, Blair Waldorf and Serena van der Woodsen.

39. It set sail from Iolcus : ARGO
In Greek mythology, Jason and the Argonauts set sail on the Argo from the city of Iolcos in search of the Golden Fleece. Jason’s vessel was called the “Argo” in honor of the ship’s builder, a man named Argus.

40. Altar adjunct : PRIE-DIEU
Prie-dieu literally means “pray (to) God” in French. A prie-dieu is basically a padded kneeler, with an arm rest in front with a shelf on which one placed books of prayer.

43. Sole component : FIN
The group of flatfish known as soles take their name from “solea”, the Latin word for “sandal”.

45. Met works : OILS
The Metropolitan Museum of Art (“the Met”) was founded in 1870 by a group of private citizens. The current museum is huge, with 2 million square feet of floor space.

49. Hawks’ old haunt : OMNI
The Omni Coliseum was the arena that was home to the Atlanta Hawks basketball team from 1972-1997. “The Omni” was part of the Omni Complex, which is now known as the CNN Center, the world headquarters of CNN.

52. “Such mishegoss!” : OY VEY!
“Oh vey” is a Yiddish expression of dismay which literally translates as “oh, pain”.

53. Charged : ARRAIGNED
In the law, to arraign someone is to call a person before a court to answer charges that have been brought.

60. They get picked : AFROS
That would be the afro hairstyle.

Down
1. Web crawler : BOT
A bot is computer program that is designed to imitate human behavior. It might “crawl” around the Web doing searches for example, or it might participate in discussions in chat rooms by giving pre-programmed responses.

2. ___ fois que (as soon as, in Arles) : UNE
A few years ago I had the privilege of living just a short car-ride from the beautiful city of Arles in the South of France. Although Arles has a long and colorful history, the Romans had a prevailing influence over the city’s design. Arles has a spectacular Roman amphitheater, arch, circus as well as old walls that surround the center of the city. In more modern times, it was a place Vincent van Gogh often visited, and where he painted his famous “Cafe Terrace at Night”, as well as “Bedroom in Arles”.

3. Chard or cab alternative : ZIN
Zinfandel is my favorite red wine varietal. It amazes me that the rich and heavy red Zinfandel comes from the same grape as does the sweet White Zinfandel.

10. Even, in Évreux : EGAL
Évreux is in the north of France.

11. 2009 Grammy winner for “Fearless” : TAYLOR SWIFT
Singer Taylor Swift had one of her first gigs at the US Open tennis tournament when she was in her early teens. There she sang the national anthem and received a lot of favorable attention for the performance.

12. Like some sleep disruptions : APNEAL
Sleep apnea can be caused by an obstruction in the airways, possibly due to obesity or enlarged tonsils.

22. Tex-Mex topping : GUAC
Guacamole is one of my favorite dishes, and is made by mashing avocados and perhaps adding the likes of tomato, onion and lime juice. The guacamole recipe dates back as early as the 16th century, to the time of the Aztecs. “Guacamole” translates as “avocado sauce”.

23. ___ Fort (World Heritage Site in India) : AGRA
Agra Fort is the less well-known of two famous monuments in the city of Agra, India. The more famous monument is the Taj Mahal. Fort Agra was once home to the famous Koh-i-Noor diamond, now part of the British Crown Jewels.

24. 2009 comedy whose tagline is “Some guys just can’t handle Vegas” : THE HANGOVER
“The Hangover” is a comedy film released in 2009. The action revolves around a bachelor party in Las Vegas. The critics liked this one, although I didn’t really enjoy it too much.

25. Yupik lang. : ESK
The Yupik are a group of peoples in Alaska and the Russian Far East. The Yupiks are part of the larger group of Eskimo peoples.

30. Letters from desperate people : SOS
The combination of three dots – three dashes – three dots, is a Morse signal first introduced by the German government as a standard distress call in 1905. The sequence is remembered as the letters SOS (three dots – pause – three dashes – pause – three dots), although in the emergency signal there is no pause between the dots and dashes, so SOS is in effect only a mnemonic. Similarly, the phrases “Save Our Souls” and “Save Our Ship” are also mnemonics, introduced after the “SOS” signal was adopted.

31. Kind of app : IPAD
The very exciting iPad isn’t Apple’s first foray into the world of tablet computing. Apple created great buzz by introducing the Newton MessagePad way back in 1993. This innovative machine was fraught with problems and really died a very slow death, finally being withdrawn from the market in 1998.

36. What some gurus are called : SRI
“Sri” is a title of respect for a male in India.

37. She hailed from the planet Alderaan : LEIA
In the “Star Wars” series of films, there is a fictional planet of Alderaan. Alderaan is the home of Princess Leia, the character played by Carrie Fisher in the original movie.

42. 1942 Preakness winner : ALSAB
Alsab was a thoroughbred racehorse, winner of the Preakness Stakes in 1942.

44. Prefix with -hedron : ICOSA-
An icosahedron is a regular polyhedron, one with 20 faces, each being an equilateral triangle.

48. Mariposa’s close relative : SEGO
The Sego Lily is the state flower of Utah, and is a perennial plant found throughout the Western United States.

49. Sandwich often given a twist : OREO
The Oreo was the best-selling cookie in the 20th century, and almost 500 billion of them have been produced since they were introduced in 1912 by Nabisco. In those early days the creme filling was made with pork fat, but today vegetable oils are used instead. If you take a bite out of an Oreo sold outside of America you might notice a difference from the homegrown cookie, as coconut oil is added in the overseas version to give a different taste.

50. “Ali” director Michael : MANN
Not only is Michael Mann a film director, but he also produced the Academy Awards ceremony twice, in 1999 and 2004.

“Ali” is a 2001 biographical movie about Muhammad Ali, with Will Smith in the title role. Among other things, the film is noted for its realistic fight scenes. They were realistic because Smith was really being hit, as hard as his opponents could manage.

51. Time for Variety? : NITE
“Variety” is a magazine that focuses on the entertainment industry.

55. O.T. book : NEH
In the Hebrew Bible the Book of Ezra was originally combined with the Book of Nehemiah, with the two being separated in the early days of the Christian Era.