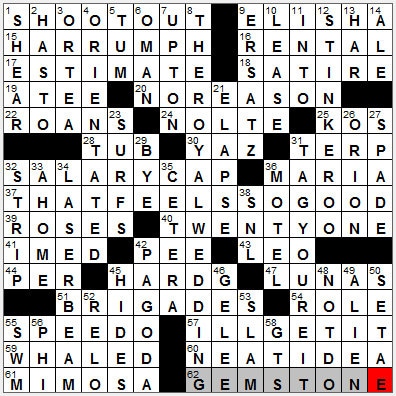 22. Some colts : ROANS
A roan horse has an even mixture of white and colored hairs on the body with the head, lower legs, mane and tail having a more solid color.

24. People’s Sexiest Man Alive after Swayze : NOLTE
In Nick Nolte’s first big film he played opposite Jacqueline Bisset and Robert Shaw,  in “The Deep” released in 1976. Prior to that Nolte had worked as a model. In fact he appeared in a magazine advertisement for Clairol in 1972 alongside fellow model, Sigourney Weaver.

I think Patrick Swayze’s greatest role was the dance instructor in the 1987 movie “Dirty Dancing”. Swayze (and Jennifer Grey who played opposite Swayze) were chosen for the starring roles because of their dancing ability. He had a fair amount of acting experience, and his dancing experience was with the Joffrey Ballet. Sadly, Swayze passed away at age 57 in 2009, from pancreatic cancer.

25. Belts in which stars are seen? : KOS
You might “see stars” when you get knocked out.

30. Bosox great : YAZ
Yaz was the nickname for Carl Yastrzemski who played his whole career with the Boston Red Sox.

31. Comcast Center athlete, briefly : TERP
The sports teams of the University of Maryland are called the Maryland Terrapins, or “the Terps” for short. The name dates back to 1932 when it was coined by the the university’s president at the time, Curly Byrd. He took the name from the diamondback terrapins that are native to the Chesapeake Bay.

36. “Do-Re-Mi” singer : MARIA
“The Sound of Music” is a Rogers and Hammerstein musical, made into a celebrated movie in 1965 starring Julie Andrews and Christopher Plummer. The musical is based on “The Story of the Trapp Family Singers”, a memoir by Maria von Trapp. The von Trapp family ended up in Stowe, Vermont after the war, and one family descended from the Vermont von Trapps lives here in the same town in which I live in California.

The famous song that starts off with “Doe, a deer …” is a show tune from the 1959 musical “The Sound of Music”, by Rogers and Hammerstein. The correct name of the song is “Do-Re-Mi”. I

40. Bad thing to bust in : TWENTY-ONE
The game of “twenty-one” was first referred to in a book by Cervantes, the author famous for writing “Don Quixote”. He called the game “ventiuna” (Spanish for “twenty-one”). Cervantes wrote his story just after the year 1600, so the game has been around at least since then. Twenty-one came to the US but it wasn’t all that popular so bonus payments were introduced to create more interest. One of the more attractive bonuses was a ten-to-one payout to a player who was dealt an ace of spades and a black jack. This bonus led to the game adopting the moniker “Blackjack”.

41. Sent some cybernotes : IMED
Those would be Instant Messages (IMs).

47. Pale-green moths : LUNAS
The lime-green Luna Moth is one of the largest moths found in North America, growing to a wingspan of up to 4½ inches.

55. Fastskin maker : SPEEDO
Speedo brand swim-wear was first produced in Australia in 1928, by a hosiery company that wanted to diversify. The brand name was chosen after a slogan competition among employees was won by “Speed on in your Speedos”. It was a long time ago, I guess …

Fastskin is a brand name used by Speedo for a fabric the company uses in swimwear for competitive swimmers. The material is said to mimic sharkskin and is intended to reduce drag as it moves through water. Speedo claims that its Fastskin line of swimwear can increase swimming velocity by 3-7%.

61. Provider of punch at brunch? : MIMOSA
Where I come from, the cocktail known in North America as a mimosa is called a Buck’s Fizz, named after the club where it was introduced in 1921. The mimosa came along a few years later, apparently first being served in the Paris Ritz. If you want to make one, it’s a 50-50 mix of champagne and orange juice, and is very tasty …

Down
6. Land with a sultan : OMAN
Oman lies on the southeast coast of the Arabian Peninsula, neighbored by the OAE, Saudi Arabia and Yemen. Oman is a Sultanate, headed by a hereditary sultan. The current head of state is Qaboos bin Said Al Said. He rules with the help of an elected advisory council (instituted in the early nineties), but there are no legal political parties.

Sultan is an Islamic title, with the word “sultan” originally meaning “strength” or “power”. The word then became a title for some Muslim rulers who claimed to have extensive authority. Sultans rule over “sultanates”, and are married to “sultanas”.

7. Kate who was the 2012 Sports Illustrated swimsuit cover model : UPTON
Kate Upton is a fashion model from St. Joseph, Michigan. Kate is a niece of US Representative Fred Upton of Michigan.

8. Instant-book title of 1981 or 2011 : THE ROYAL WEDDING
Charles, Prince of Wales married Lady Diana Spencer in 1981 at St. Paul’s Cathedral in London. The wedding was a huge television event, with about 750 million people tuning in worldwide. Although the event was billed as a fairytale wedding, the couple separated in 1992 and divorced in 1996.

Prince William, Duke of Cambridge married Catherine “Kate” Middleton in 2011 at Westminster Abbey in London. Middleton is what one might call a commoner, born to parents who were flight attendants. However, as is so often the case in Britain, Kate’s ancestry can be traced back far enough to show that she and William do have common ancestors, dating back to the 1500s on her mother’s side and to the 1400s on her father’s side.

9. Imitation : ERSATZ
Something described as “ersatz” is a copy, and usually not a good one. “Ersatz” comes from the German verb “ersetzen” meaning “to replace”.

14. Half-and-half half : ALE
The alcoholic drink known as a “half-and-half” is 50-50 mix of two different types of beer. Back in Ireland a half-and-half is made from an Irish ale on the bottom with Guinness floated on top. Over here you might see that combination referred to as a “Black and Tan”, but we tend to avoid that reference in my homeland. The Black and Tans were British paramilitary units deployed in Ireland in the early 1920s to suppress the movement for independence. They weren’t very good guys …

31. Cry before “No backsies!” : TAG, YOU’RE IT
In the game of tag, the rule of “no backsies” prevents a person who is tagged from immediately tagging the person who made that tag.

35. Peter with the 1986 #1 hit “Glory of Love” : CETERA
The musician Peter Cetera was one of the original members of the rock band Chicago. After his days with Chicago, Cetera built a successful solo career for himself.

38. Big inits. in comedy : SNL
NBC first aired a form of “Saturday Night Live” (SNL) in 1975 under the title “NBC’s Saturday Night”. The show was actually created to give Johnny Carson some time off from “The Tonight Show”. Back then “The Tonight Show” had a weekend episode, and Carson convinced NBC to pull the Saturday or Sunday recordings off the air and hold them for subsequent weeknights in which Carson needed a break. NBC turned to Lorne Michaels and asked him to put together a variety show to fill the vacant slot, and he came up with what we now call “Saturday Night Live”.

50. Caterpillar bristles : SETAE
“Seta” is derived from the Latin word for a “bristle”, and is used to describe bristle-like structures in both plants and animals.

56. Golden ratio symbol : PHI
The golden ratio, denoted by the Greek letter phi, is a mathematical constant that often turns up in the world of art. Phi is approximately equal to 1.61, and is represented by the two distances, a and b, where (a+b)/a = a/b. Somehow we perceive the ratio of 1.61 as “pleasing” so it appears in many works of art and in building design. For example, many aspects of the Parthenon in Athens have the ratio of 1.61 (width compared to height). Leonardo da Vinci’s famous drawing of the Vitruvian Man also illustrates the golden ratio in the proportions of the human body, where he shows that the distance from the foot to the navel, compared to the distance from the navel to the head, is 1.61.