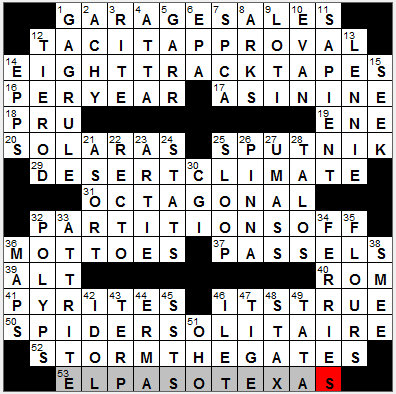 
Today’s Wiki-est, Amazonian Googlies
Across
1. Category on Craigslist : GARAGE SALES
Craigslist is an online network of communities that features classified advertisements organized geographically. Craigslist was started by Craig Newmark in 1995, originally as an email distribution list for his friends who lived and worked in the San Francisco Bay Area.

14. They’re rarely played nowadays : EIGHT-TRACK TAPES
“8-track” is a common term for the sound recording technology more correctly called “Stereo 8”. 8-track became popular for a while because its magnetic tape came in a cartridge that was convenient to use in a car.

20. Some Toyotas : SOLARAS
The Solara is sporty version of the Toyota Camry.

25. Subject of the book “Red Moon Rising” : SPUTNIK
The Soviet Union launched the Sputnik satellite towards the end of 1957, a development that shocked the establishment in the US. Within months, President Eisenhower made his move, creating the Advanced Research Projects Agency (ARPA, now DARPA) and the National Aeronautics and Space Administration (NASA).

“Red Moon Rising” is a book by Matthew Brzezinski that tells the story of the development of the Sputnik, the first artificial satellite to orbit the earth. According to the book, Nikita Krushchev wanted to get his own back for all the US spy planes flying high over the Soviet Union. He was convinced that orbiting spy satellites could level the playing field.

31. Like Jerusalem’s Dome of the Rock : OCTAGONAL
The Dome of the Rock is a beautiful Islamic mosque located on the Temple Mount in the Old City of Jerusalem. The golden dome, which gives the structure its name, was refurbished in 1993 using $8.2 million gifted by King Hussein of Jordan. Apparently King Hussein sold one of his houses in London in order to fund the 80 kg of gold required for the project.

36. “Eureka” and “Excelsior” : MOTTOES
“Eureka” is the Greek for “I have found it”, and is the motto of the state of California.

37. Heaps : PASSELS
A passel is a large group or quantity. “Passel” is a variation of the word “parcel”.

41. Sulfide-containing group : PYRITES
Pyrite is a mineral, also known as a iron pyrite. Famously, it has an appearance very similar to gold, so has the nickname “fool’s gold”. Pyrite does find its way into some baubles, which go be the name of marcasite jewelry.

52. Openly attack en masse : STORM THE GATES
“En masse” is of course a French term best translated as, “as a group”.

53. Home of Sun Bowl Stadium : EL PASO, TEXAS
The Sun Bowl is an annual college football game played in El Paso. The Rose Bowl is the oldest of the bowl games, but the Sun Bowl, Sugar Bowl and Orange Bowl come in second. The first Sun Bowl was played on New Year’s Day 1935. To be fair to the sponsors, the full name today is the Brut Sun Bowl …

Down
3. Diet ___ : RITE
Diet Rite is a no-calorie cola drink that has been around since 1958. Diet Rite was introduced by RC Cola, but the brand is now owned by the Dr Pepper Snapple Group.

5. “Oh, God!” co-star : GARR
The lovely Teri Garr had a whole host of minor roles in her youth, including appearances in nine Elvis movies. Garr’s big break came with the role of Inga in “Young Frankenstein”, and her supporting role in “Tootsie” earned her an Academy Award nomination. Sadly, Teri Garr suffers from multiple sclerosis and is a National Ambassador for the National Multiple Sclerosis Society.

“Oh, God!” is a comedy movie that was released in 1977. The great George Burns plays the title role (God!) with John Denver co-starring. George Burns was the big success in the cast, and he alone reprised his role in two sequels in the 1980s.

6. It’s got its standards: Abbr. : EPA
The Environmental Protection Agency (EPA) was set up during the Nixon administration and began operation at the end of 1970.

7. Org. providing assistance to Afghans and Persians : SPCA
Unlike in other countries, there is no “umbrella” organization in the US with the goal of preventing cruelty to animals. Instead there are independent organizations set up all over the nation using the name SPCA. Having said that, there is an American Society for the Prevention of Cruelty to Animals (ASPCA) that was originally intended to operate across the nation, but it now focuses its efforts in New York City.

The Afghan Hound is a dog with a thick hairy coat. The breed originated in Afghanistan in cold areas where all that insulation was an advantage.

8. Scroll holders : ARKS
The Torah ark is found in a synagogue, and is the ornamental container in which are stored the Torah scrolls.

9. French novelist Pierre : LOTI
Pierre Loti was a French writer, and also an officer in the French Navy.

10. ___ Longoria, 2008 A.L. Rookie of the Year : EVAN
Evan Longoria plays baseball for the Tampa Bay Rays. Evan would like everyone to know that he is no relation to Eva Longoria the actress.

11. Perspicacious : SAPIENT
To be sapient is to have great wisdom and discernment. “Sapient” comes from the Latin “sapere” meaning “to perceive, to be wise”.

12. Part of a car’s steering system : TIE ROD
Tie rods are part of the rack and pinion steering mechanism in a car.

13. Gentle giant of Steinbeck’s “Of Mice and Men” : LENNIE
“Of Mice and Men” is a novella written by American author John Steinbeck, published in 1937. The title comes from the famous poem by Robert Burns, “To a Mouse”. The inspirational line is “The best-laid schemes o’ mice an’ men, gang aft agley.”

14. Omar in Hollywood : EPPS
Omar Epps is the actor who plays Eric Foreman on the excellent television series “House”. Prior to playing Dr. Foreman, Epps had a recurring role playing Dr. Dennis Grant on “ER”. And, in another link to the world of medicine, Epps was born in Savannah, Georgia to single mom, Dr. Bonnie Epps.

22. Page one is traditionally one : RECTO
The left and right pages of a book or magazine are known in publishing circles as verso and recto. Recto comes from the Latin for “right”, and verso comes from the Latin word for “turned”. The idea is that the left side of the page is “turned” and is the reverse of the right side.

23. ___ Abrams, character on “Glee” : ARTIE
Artie Abrams is a character in the Fox television show “Glee”. Abrams is played by the young actor Kevin McHale. Abrams is the character who gets around in a wheelchair.

25. One-master : SLOOP
Sloops and cutters are sailboats, and each has just one mast. One major difference between the two types of vessel is that the mast on a cutter is set much further aft than the mast on a sloop.

26. Outer ear : PINNA
Pinna is a the anatomical name for the outer ear, the fleshy part that resides outside the head. “Pinna” is the Latin for “feather”.

27. Campus near the J.F.K. Library : UMASS
The John F. Kennedy Presidential Library is a splendid structure located right beside the Boston campus of the University of Massachusetts. President Kennedy chose the location for his library just one week before he was assassinated.

28. Giant bronze man in Greek myth : TALOS
Jason and the Argonauts sailed on the Argo of Greek mythology. After obtaining the Golden Fleece, the Argo approached the island of Crete that was guarded by Talos, a giant man of bronze. Talos repulsed the Argonauts by hurling boulders at them. Eventually Talos was slain by removing the bronze nail that sealed the one vein that ran the length of his body.

32. Sea fan colonists : POLYPS
Polyps are tiny sea creatures that are found attached to underwater structures or to other polyps. Polyps have a mouth at one end of a cylindrical “body” that is surrounded by tentacles.

33. Reduce through retirement : ATTRITE
To attrit (or “to attrite”) is to lose by attrition, as in the loss of personnel without having to lay them off.

36. Google ___ : MAPS
Google Maps is the core application to a suite of services that includes the Google Maps Website, Google Ride Finder and Google Transit. Google acquired this technology when they purchased a company based in Sydney, Australia. The basic application was developed by two Danish brothers called Lars and Jens Rasmussen.

38. Storybook pirate : SMEE
In J. M. Barrie’s play and novel about Peter Pan, Smee is one of Captain Hook’s pirates and is Hook’s right-hand man. Smee is described by Barrie as being “Irish” and “a man who stabbed without offence”. Nice guy!

42. Target of a Fox hunt? : IDOL
“American Idol” is a spin-off show that was created after the amazing success of the British television show “Pop Idol”. I can’t abide the program …

43. One singing “Fight, fight, fight for Maryland!” : TERP
The sports teams of the University of Maryland are called the Maryland Terrapins, or “the Terps” for short. The name dates back to 1932 when it was coined by the the university’s president at the time, Curly Byrd. He took the name from the diamondback terrapins that are native to the Chesapeake Bay.

45. Onetime landers at LAX : SSTS
The most famous Supersonic Transport (SST) was the Concorde, a plane that’s no longer flying. Concorde had that famous “droop nose”. The nose was moved to the horizontal position during flight to create the optimum aerodynamic shape thereby reducing drag. It was lowered during taxi, takeoff and landing, so that the pilot had better visibility. The need for the droop nose was driven largely by the delta-shaped wings. The delta wing necessitates a higher angle of attack at takeoff and landing than conventional wing designs, so the pilot needed the nose lowered so that he or she could see the ground.

Los Angeles International Airport is the sixth busiest airport in the world in terms of passenger traffic, and the busiest here on the West Coast of the US. The airport was opened in 1930 as Mines Field, and was renamed to Los Angeles Airport in 1941. On the airport property is the iconic white structure that resembles a flying saucer. This is called the Theme Building and I believe it is mainly used as a restaurant and observation deck for the public. The airport used to be identified by the letters “LA” but, when the aviation industry went to a three-letter standard for airport identification, this was changed to “LAX”. Apparently the “X” has no significant meaning.

47. Old comics dog : TIGE
“Buster Brown” was a comic strip created in 1902 by Felton Outcault. Outcault took his name Buster from the very popular film star at the time, Buster Keaton. Buster’s dog, Tige, was an American Pit Bull Terrier. Apparently when Tige started to “talk” in the strip, he became the first talking pet in American comics.

48. Classic Memphis-based record label : STAX
Stax Records was founded in 1957 as Satellite Records. The biggest star to record with Stax was the great Otis Redding.