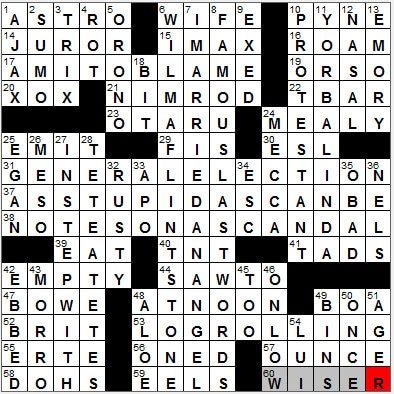 
Today’s Wiki-est, Amazonian Googlies
Across
1. Pirate battler, at times : ASTRO
The Houston baseball franchise changed its name to the Astros from the Colt .45s in 1965 when the team started playing in the Astrodome. The Astrodome was so called in recognition of the city’s long association with the US space program.

The Pittsburgh Pirates were an early team in the National Baseball League, joining in 1887 just six years after the league was formed. The Pirates played in the first ever World Series, in 1903, and won their first World Series in 1909.

10. Christie detective Parker ___ : PYNE
Parker Pyne is one of the lesser-known heroes created by the murder-mystery novelist Agatha Christie. Pyne appears in just three of her books

15. Big movie fan’s option? : IMAX
The IMAX Corporation, which is behind the IMAX film format, is a Canadian company. The impetus for developing the system came after Expo ’67 in Montreal. Back then large format screenings were accomplished using multiple projectors with multiple screens, with images basically stitched together. The team behind the IMAX technology set out to simplify things and developed a single-camera, single-projector system.

20. Certain losing line : XOX
When I was growing up in Ireland, we played “noughts and crosses” … our name for tic-tac-toe.

21. Klutz : NIMROD
“Nimrod” is a slang term used to describe a foolish person.

“Klutz” of course comes from Yiddish. The Yiddish word for a clumsy person is “klots”.

22. Boarder’s way up : T-BAR
A T-bar is a type of ski lift in which the skiers are pulled up the hill in pairs, with each pair standing (not sitting!) either side of T-shaped metal bar. The bar is placed behind the thighs, pulling along the skier who remains standing on his/her skis (hopefully!). There’s also a J-bar, a similar device, but with each J-shaped bar used by one skier at a time.

23. City on Ishikari Bay : OTARU
The Japanese city and port of Otaru is just a 25-minute drive northwest from Sapporo. Just like Sapporo, Otaru has a famous beer that shares the city’s name.

30. It fosters bilingualism: Abbr. : ESL
English as a Second Language (ESL) is sometimes referred to as English for Speakers of Other Languages (ESOL) and English as a Foreign Language (EFL).

38. Film for which Judi Dench was nominated for Best Actress : NOTES ON A SCANDAL
“Notes on a Scandal

” is a powerful British film released in 2006, based on a novel by Zoë Heller. Stars of the film are Judi Dench and Cate Blanchett. Blanchett playes the role of teacher who has an affair with an underage student at her school, and Dench plays a lesbian teacher at the same school who has a crush on the character played by Blanchett. Also, the movie has a fabulous soundtrack

40. Things bust when it booms : TNT
TNT is an abbreviation for trinitrotoluene. The chemical was first produced by the German chemist Joseph Wilbrand in 1863, who developed it for use as a yellow dye. TNT is relatively difficult to detonate so it was on the market as a dye for some years before its more explosive properties were discovered.

41. Young ‘uns : TADS
Back in the 1800s “tad” was used to describe a young child, and this morphed into our usage meaning a small amount in the early 1900s. The original use of “tad” for a child is very likely a shortened version of “tadpole”.

47. He took Holyfield’s title away in 1992 : BOWE
Riddick Bowe is professional boxer from Brooklyn, New York. Bowe was Undisputed Heavyweight Champion of the World in 1992. A few years later Bowe retired from boxing to join the US Marines. However, after just 11 days of basic training Bowe wanted to quit, and the Marine Corps came into a lot of criticism for acceding to his request.

Evander Holyfield is a professional boxer from Atmore, Alabama. Holyfield was Undisputed World Champion twice over, once as a cruiserweight and then as a heavyweight.

49. Camp accessory : BOA
To appear more camp, someone might wear a feather boa.

53. Back-scratchers’ activity : LOG ROLLING
“Back-scratching” and “log-rolling” are slang terms for trading favors, as in “I’ll scratch your back, if you scratch mine”.

57. Modicum : OUNCE
A modicum is a small portion, with “modicum” coming into English from Latin, via Scottish. “Modicum” is Latin for “a little”.

59. Some nonkosher fish : EELS
According to Jewish dietary law, kosher food is “fit” to eat, and food that is not kosher is called treif (or tref).

Down
1. Sophocles tragedy : AJAX
Sophocles was one of three ancient Greek tragedians whose work has survived. The first of these was Aeschylus, the second Sophocles, and the third Euripides. Sophocles is believed to have written 123 plays, the most famous of which are “Antigone” and “Oedipus the King”.

2. Rikishi’s specialty : SUMO
Sumo is a sport that is practiced professionally only in the country of its origin, Japan. There is an international federation of sumo wrestling now, and one of the organization’s aims is to have the sport accepted as an Olympic event.

“Rikishi” is the term used for a sumo wrestler. “Rikishi” translates from Japanese as “strong man”.

3. Multicolored breakfast food : TRIX
Trix is a corn-based breakfast cereal that has been around since 1954, produced by General Mills. Ads for the cereal featured Trix Rabbit, who would try hard to get hold of bowls of the cereal. He would always get caught though, and be admonished with, “Silly rabbit, Trix are for kids!” With 46% sugar content, the rabbit probably wouldn’t have liked it anyway …

5. Black Bears’ home : ORONO
The Maine Black Bears are the athletic teams of the University of Maine.

6. Maker of gravelberry pies : WILMA FLINTSTONE
I once had the privilege of spending an afternoon in the room (Bill Hanna’s den) where Bill Hanna and Joe Barbera came up with the idea of “The Flintstones” …

7. “Spring Is Here” musical : I MARRIED AN ANGEL
“I Married an Angel

” is a Rodgers and Hart musical first staged in 1938 on Broadway. The musical is based on a play by the Hungarian playwright János Vaszary.

10. Congregationalist, e.g. : PROTESTANT
Broadly speaking, Protestantism is a term used to describe Christianity outside of the Roman Catholic and Eastern traditions.

11. Richard Nixon’s birthplace : YORBA LINDA
President Richard Milhous Nixon used “Milhous” in his name in honor of his mother, Hannah Milhous who married Francis Nixon. Richard was born in a house in Yorba Linda, California. You can visit that house today as it is on the grounds of the Richard Nixon Presidential Library. It’s a really interesting way to spend a few hours if you ever get to Yorba Linda …

13. The Eagles of the N.C.A.A. : EMORY
Emory is a private school in Atlanta, Georgia with a focus on graduate research. The school was named after a Methodist Episcopal bishop called John Emory, who was very popular at the time of the school’s founding in 1836.

18. Shtick : BIT
A “shtick” is a routine, a bit, a piece of entertainment. It comes from the Yiddish “shtick” which has the same meaning, and derives from the Middle High German word “stücke”, the word for “piece”.

24. Vegas, vis-à-vis gambling : MECCA
Back in the 1800s, the Las Vegas Valley was given its name from the extensive meadows (“las vegas” is Spanish for “the meadows”) present in the area courtesy of the artesian wells drilled by local farmers. Las Vegas was incorporated as a city in 1905, in the days when it was a stopping-off point for pioneers travelling west. It eventually became a railroad town, although with the coming of the railroad growth halted as travelers began to bypass Las Vegas. The city’s tourism industry took off in 1935 with the completion of the nearby Hoover Dam, which is still a popular attraction. Then gambling was legalized, and things really started to move. Vegas was picked, largely by celebrated figures in “the mob”, as a convenient location across the California/Nevada state line that could service the vast population of Los Angeles. As a result, Las Vegas is the most populous US city founded in the 20th century (Chicago is the most populous city founded in the 19th century, just in case you were wondering).

” author Greg : EGAN
Greg Egan is science fiction author from Australia. Egan is a very private individual, one who does not do book signings or appearances at science fiction fairs. His own website doesn’t even feature a picture of himself. I couldn’t find his photo anywhere on the Web …

26. American leader? : MESO-
Mesoamerica is a region extending from Central Mexico, south to Costa Rica. It is known as an area where societies flourished prior to the Spanish colonization of the Americas in the 16th and 17th centuries.

28. Private powwows : TETE A TETES
A “tête-à-tête” is a one-on-one meeting, literally “head-to-head” in French.

A “pow-wow” is a gathering, a term used by Native Americans. The term derives from the Algonquian Narragansett word “powwow” which means “spiritual leader”. The Narragansett also gave us such words as “moose”, “papoose” and “squash”.

34. Bailout button : ESC
The escape key was originally used to control computer peripherals. It was a key that allowed the computer operator to stop what the peripheral was doing (cancel a print job, for example). Nowadays the escape key is used for all sorts of other things, especially in gaming programs.

35. Book after Amos: Abbr. : OBAD
The Book of Obadiah is the shortest book in the Hebrew Bible, consisting of just one chapter, divided into 21 verses.

had the honor of making his Broadway debut in that production, some 5-6 years before making it onto the big screen.

43. Havana’s ___ Castle : MORRO
Morro Castle is a fortress guarding the entrance to Havana Bay in Cuba. The castle was built by the Spanish in 1859. The name “Morro” means a rock that is visible from the sea.