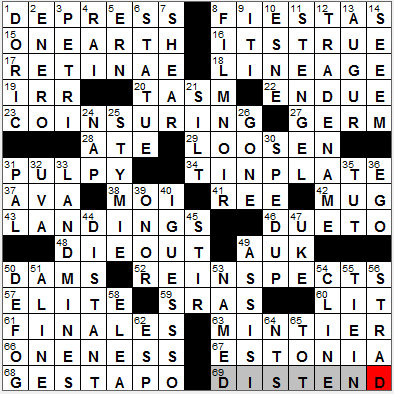 CROSSWORD SETTER: Alan Arbesfeld
THEME: X in Y … all the theme answers are words with the form “X IN Y”. By actually putting the “X” in the “Y”, you arrive at the word that makes up the clue:


Today’s Wiki-est, Amazonian Googlies
Across
17. ARETE : RETINAE
“Retinae” is the plural of “retina”. The retina is the tissue that lines the inside of the eye, the tissue that is light-sensitive. There are (mainly) two types of cell in the retina that are sensitive to light, called rods and cones. Rods are cells that best function in very dim light and only provide black-and-white vision. Cones on the other hand function in brighter light and can perceive color.

An arete is ridge of rock defining the border between two parallel valleys that have been formed by glaciation. If this ridge is rounded, it is called a “col”. However if it is “sharpened”, with rock falling way due to successive freezing and thawing, then it is called an “arete”. “Arête“ is the French word for “fish bone”.

20. Isl. off the coast of Australia : TASM
Tasmania is the large island lying off the southeast cost of Australia. The Dutch explorer Abel Tasman was the first European to sail past the island, in 1642. Tasman named his discovery Van Dieman’s Land after the Governor of the Dutch East Indies, Anthony van Dieman. The name was officially changed to Tasmania, after the discoverer himself, in 1856. In Australia a more familiar name used is “Tassie”.

34. PLATTE : TINPLATE
The Platte River used to be called the Nebrakier, which is an Oto word meaning “flat river”. For a while it was also called the River Plate as “plate” is the French word “flat”. Later this became “Platte”, the phonetic spelling of the French “plate”.

is noted for her association with some big movies, but also for her association with some big names when it came to the men in her life. In the world of film, she appeared in the likes of “Mogambo” (1953), “On the Beach” (1959), “The Night of the Iguana” (1964) and “Earthquake” (1974). The men in her life included husbands Mickey Rooney, Artie Shaw and Frank Sinatra. After her marriages had failed (and perhaps before!) she had long term relationships with Howard Hughes and bullfighter Luis Miguel Dominguin whom she met through her friend Ernest Hemingway.

” is an excellent film released in 1954, with Ava Gardner in the title and also starring Humphrey Bogart and Edmond O’Brien. The movie tells the story of Maria Vargas, a nightclub dancer who eventually weds a count, and who likes to go around in bare feet. Hence, the title …

41. Mr. ___ (old detective game) : REE
The full name for the old mystery game is “Mr. Ree! The Fireside Detective”. It was first published in 1937 and frankly it sounds like a great game, even by today’s standards …

57. Like the Green Berets : ELITE
The US Army Special Forces are known as the Green Berets because they wear … green berets. The Green Beret is also worn by the Royal Marines of the British Army. When US Army Rangers and OSS operatives were trained by the Royal Marines in Scotland during WWII, graduates of the gruelling training program were awarded green berets by their British instructors. The US soldiers, although proud of their new headgear, were not allowed to wear it as part of their uniform and had to wait until 1961 when President Kennedy authorized the green beret for exclusive use by US Special Forces.

59. Many telenovela viewers: Abbr. : SRAS
A “telenovela” is a “television novel”, a form of programming that is very popular in Latin America. A telenovela is sort of like a soap opera that has an end in sight, and that runs for less than a year. I like this quote from an executive at Telemundo:

“A telenovela is all about a couple who wants to kiss and a scriptwriter who stands in their way for 150 episodes.”

61. ALEFS : FINALES
Alef is the first letter of the Hebrew alphabet, and beth the second.

66. Tenet of Taoism : ONENESS
The Chinese character “tao” translates as “path”, but the concept of Tao signifies the true nature of the world.

67. It broke from Russia in 1920 : ESTONIA
Estonia is one of the former Soviet Socialist Republics, located in Northern Europe on the Baltic Sea, due south of Finland. Estonia has been overrun and ruled by various empires over the centuries. The country did enjoy a few years of freedom at the beginning of the 20th century after a war of independence against the Russian Empire. However, Estonia was occupied again during WWII, first by the Russians and then by the Germans, and then reoccupied by the Soviets in 1944. Estonia has flourished as an independent country again since the collapse of the USSR in 1991.

68. “Casablanca” villains : GESTAPO
Gestapo is a contraction for “Geheime Staatspolizei”, or “Secret State Police”. The Gestapo was formed in 1934, not long after Adolf Hitler took power as Chancellor of Germany in 1933.

” was never really expected to be the well-received movie that it is today. The movie did have a great cast of characters, but it was the first time Bogart was asked to play the romantic lead. Also, the film was plagued by changes in the scriptwriting team so that the script was being written on the fly as filming proceeded.

Down
1. Column style : DORIC
The Doric was one of the three classical orders of architecture, the others being the Ionic and the Corinthian.

2. When to celebrate Día de Reyes : ENERO
In Spanish, a year (año) starts in January (Enero) and ends in December (Diciembre).

3. Kind of dish : PETRI
Julius Richard Petri was a German bacteriologist and was the man after whom the Petri dish is named. The petri dish can have an agar gel on the bottom which acts a nutrient source for the specimen being grown and studied, in which case the dish plus agar is referred to as an “agar plate”.

Thor Heyerdahl was a noted Norwegian adventurer famous for his Kon-Tiki expedition in which he sailed a raft over 4,000 miles from South America to the Tuamotu Archipelago in the South Pacific. He also sailed a boat made from papyrus called Ra II from Morocco, across the Atlantic Ocean to Barbados.

5. Coastal flier : ERN
The ern (also erne) is also called the white-tailed eagle, and the sea-eagle.

8. “The Maltese Falcon,” e.g. : FILM NOIR
The expression “film noir” has French origins, but only in that it was “created” by a French critic in describing a style of Hollywood film. The term, translating as “black film” in French, was first used by Nino Frank in 1946. Film noir often applies to a movie with a melodramatic plot and a private eye or detective at its center. Good examples would be “The Big Sleep” and “D.O.A”.

” was written by Dashiell Hammett, and first published in 1930. The main character if of course Sam Spade, famously played by Humphrey Bogart in the third movie adaptation of the book

10. Feudal laborer : ESNE
Esne is an uncommon word, a synonym for serf as best I can tell, a member of the lowest feudal class.

11. Casey at the bat, once : STENGEL
Casey Stengel

was a professional baseball player, playing from 1912-1925 and managing from 1934-1965. Stengel was born in Kansas City. He had German heritage, and so was called “Dutch” for much of his early life. As he acquired fame on the baseball field he was given the nickname “Casey”, largely because he came from Kansas City (“KC”) and also because of the popularity of the poem “Casey at the Bat”. He was a smart and erudite guy when it came to baseball, so sportswriters tended to call him “The Old Professor”.

13. Presage : AUGUR
The verb “augur” means “bode”, to serve as an omen. The word comes from the name of religious officials in Ancient Rome, augurs, whose job it was to interpret signs and omens.

25. Block : STYMIE
The word “stymie” comes from golf, and is a situation in which one’s approach to the hole is blocked by an opponent’s ball.

32. The Cavaliers’ sch. : UVA
The University of Virginia (UVA) was of course founded by Thomas Jefferson, who sat on the original Board of Visitors with former US Presidents James Madison and James Monroe. In fact, the original UVA campus sat on land that was once a farm belonging to President Monroe.

The University of Virginia Cavaliers wear colors of orange and navy blue that were adopted in 1888, and were deliberately chosen as the same colors of Oxford University in England.

47. Luau accompaniment : UKE
The ukulele originated in the 1800s and mimicked a small guitar brought to the Hawaiian Islands by Portuguese immigrants.

49. Birthplace of St. Francis : ASSISI
St. Francis founded the Franciscan religious order in Assisi in 1208. He died in 1226, and was declared a saint just two years later in 1228.

51. Dior design of the 1950s : A-LINE
Christian Dior was a French fashion designer. As WWII approached, Dior was called up by the French military, drawing a temporary halt to his career in fashion. He left the army in 1942 and for the duration of the war designed clothes for wives of Nazi officers and French collaborators. After the war his designs became so popular that he helped reestablish Paris as the fashion center of the world.

was a country music singer who managed to cross over into the world of pop music where she enjoyed great success. Cline is one of a long list of musical legends who died in plane crashes. Cline was 30 years old when she was killed in 1963 in a Piper Comanche plane piloted by her manager, Randy Hughes. Hughes and Cline decided to make that last flight despite warnings of inclement weather, and it was a severe storm that brought down the plane in a forest outside Camden, Tennessee.

56. Expensive strings, familiarly : STRAD
Generations of the Stradivari family produced violins, the most famous of which were constructed by Antonio Stradivari.

58. Zeno’s home : ELEA
Zeno of Elea was a Greek philosopher who lived in Elea, a Greek colony in Southern Italy. Zeno is famous for his “paradoxes”, a set of problems that really make you think! In the problem known as Achilles and the Tortoise, Zeno tells us that Achilles races a tortoise, giving the tortoise a head start (of say 100 meters). By the time Achilles reaches the starting point of the tortoise, the tortoise will have moved on, albeit only a small distance. Achilles then sets his sights on the tortoise’s new position and runs to it. Again the tortoise has moved ahead a little. Achilles keeps on moving to the tortoise’s new position but can never actually catch his slower rival, or can he …?

64. Some Windows systems : NTS
Windows XP, Windows Vista and now Windows 7; they’re all based on the Windows NT operating system. There is a common perception that Windows NT (WNT) takes its name from VMS, an earlier operating system developed by Digital Equipment Corporation. “WNT” is what’s called a “Caesar cypher” of “VMS”, as you just augment the the letters of VMS alphabetically by one to arrive at WNT. Bill Gates disputes this derivation of the name, and in a 1998 interview stated that the NT originally stood for N-Ten, and the marketing folks at Microsoft revised history by changing it to “New Technology”.