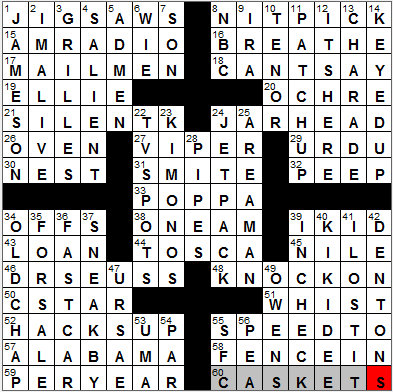 19. Kemper of “The Office” : ELLIE
When Pam gave up her spot at the reception desk in the US version of the hit sitcom “The Office”, it was taken over by Kelly Erin Hannon. Erin, as she is known, is played by Ellie Kemper. Kemper had auditioned for the sitcom “Parks and Recreation” but didn’t get the part. However, she did get a call back to play on “The Office”. I think it’s a great show, and the addition of the character called Erin adds a lot …

24. Leatherneck : JARHEAD
Marines are called jarheads because of their high and tight regulation haircuts, at least that’s the story I read …

Marines are called leathernecks as American and British marines once wore leather collars on their uniforms. In the British Military, “leatherneck” was a term used by sailors for any soldier.

44. “Vissi d’arte” singer : TOSCA
Unlike so many operas, “Tosca” was a big hit right from day one, when it was first performed in 1900 at the Teatro Costanzi in Rome. I’ve only seen it once myself, but it is the eighth-most performed opera in America these days.

45. Blue ___ : NILE
Depending on definition, the Nile is generally regarded as the longest river on the planet. The Nile forms from two major tributaries, the White Nile and the Blue Nile, which join together near Khartoum, the capital of Sudan. From Khartoum the Nile flows north, traveling almost entirely through desert making it central to life for the peoples living along its length.

46. Writer who coined the word “nerd” : DR SEUSS
Dr. Seuss was the pen name of Theodor Seuss Geisel. Geisel was commander of the Animation Department of the USAF during WWII. He was behind many propaganda films including one called “Our Job in Japan”. Even though the film was produced specifically as propaganda, this same movie was used after the war as a basis for the short feature “Design for Death”, a study of Japanese culture released in 1947 and winner of an Oscar for best Documentary.

“If I Ran the Zoo” is a book written by Dr. Seuss and published in 1950. Apparently this book is famous for using the word “nerd”, the first time it had been seen in print.

50. Red giant : C STAR
A carbon star is a star with an atmosphere rich in carbon, more carbon than oxygen. Such an atmosphere is very “sooty” and as such might appear very red in color when viewed through a telescope.

Red giants are very large stars with a relatively low mass. The atmosphere of a red giant is also very inflated and extends a long way into space so the surface of that atmosphere that we see is relatively cool, which gives it a red color.

51. Specialty of Edmond Hoyle : WHIST
Whist is an English card game that involves the taking of tricks. Whist is a derivative of the earlier game of Trump or Ruff that was played in the 16th century. Back in Ireland, where I come from, whist tournaments are extremely popular and are known as “whist drives”.

Edmond Hoyle was a writer, most famous for documenting the rules and play of card games. In particular, Hoyle first wrote a book on the game of whist that was very popular. Such was the success of Hoyle’s treatises, that we use the phrase “according to Hoyle” to mean “according to some respected authority”.

Down
1. Irish whiskey brand : JAMESON
Jameson is a brand of Irish whiskey from Dublin, and is the best selling Irish whiskey in the world. It’s not my favorite though, that honor going to Bushmills (from Northern Ireland).

2. Title of hits for Neil Diamond, Celine Dion and the Electric Light Orchestra : I’M ALIVE
“I’m Alive” is the title of quite a few songs recorded by quite a few different artists.

I saw Neil Diamond in concert about 15 years ago, and I must say he does put on a great show. His voice is cracking a bit, but that didn’t seem to spoil anyone’s enjoyment. I’ve also seen Diamond interviewed a few times on television, and I wouldn’t say he has the most scintillating personality.

French-Canadienne singer Celine Dion first came to international attention when she won the 1988 Eurovision Song Contest. She represented Switzerland in the competition that was hosted in Dublin, Ireland.

The Electric Light Orchestra is a symphonic rock group from the north of England. The band’s manager was Don Arden, father of Sharon Osbourne (wife of Ozzy).

3. Distinctive Cadillac features : GRILLES
The Cadillac Automobile Company was founded in 1902, as an independent company. It was taken over by GM in 1909, and over the next thirty years GM did a great job establishing Cadillac as the luxury car one just had to own.

6. Golfer Michelle : WIE
Michelle Wie is an American golfer on the LPGA Tour. Wie began playing golf at the age of four and was the youngest player ever to qualify for an LPGA tour event. She turned pro just before her 16th birthday …

8. Airer of “Dr. Kildare” and “Mr. Novak” : NBC
NBC has had a number of different logos in the history of the company, including the famous peacock with which we are familiar today. The first peacock logo was introduced in the early days of color television and was designed to illustrate how wonderful color television would be, so go buy one! (NBC was owned by RCA, and they had a vested interest in sales of color television sets).

“Dr. Kildare” started off as the main character in a series of films in the thirties and forties. It then became a fifties radio show and a very successful sixties television drama starring Richard Chamberlain in the title role.

“Mr. Novak” is a television drama that was aired in the mid-sixties, with James Franciscus in the title role. Mr. Novak was a high school teacher.

10. Tannhäuser, for one : TENOR
“Tannhäuser” is an opera by Richard Wagner. The title role is a tenor.

23. T-shaped robes : KIMONOS
The lovely Japanese kimono is a garment worn by men, women and children. The word “kimono” translates simply as “thing to wear”, with “ki” meaning “wear” and “mono” meaning “thing”.

24. Futuristic means of locomotion : JET PACK
The jet pack was originally restricted to the world of science fiction, the concept having been introduced in the 1920s. Then in the 1960s the jet pack became a reality, with people flying through the air, particularly in movies.

41. What happened “at the Movies” in a 1965 Pauline Kael title : I LOST IT
“I Lost It at the Movies” is collection of film reviews by critic Paul Kael that was published in one volume in 1965.

42. Dr. ___ : DENTON’S
Dr. Denton’s is a brand of blanket sleeper, all-over sleepwear that is especially worn by infants and young children. The brand name is derived from the name of the creator of the garment, one Whitley Denton. The “Dr.” was added to intimate that Dr. Denton’s were designed and endorsed by a medical doctor.

47. ___ Majoris : URSAE
The constellation called Ursa Major (Latin for “Larger Bear”) is often just called the Big Dipper because of its resemblance to a ladle or dipper. Ursa Major also resembles a plow, and that’s what we usually call it back in Ireland, the “plough”. The words “Ursae Majoris” mean “of Ursa Major”, and are found in the name of several stars in the constellation.

49. Voice actor Gary : OWENS
Do you remember Gary Owens on “Rowan And Martin’s Laugh-In”? He has such a great baritone voice and delivered absolute drivel in terms of lines, with such deadpan enthusiasm. Owens used his voice to good effect in cartoon roles, and as a successful disk jockey.

53. Actress Thurman : UMA
Uma Thurman’s father, Robert Thurman, was the first westerner to be ordained a Tibetan Buddhist monk. Robert raised his children in the Tibetan Buddhist tradition and called his daughter “Uma” as it is a phonetic spelling of the Buddhist name “Dbuma”.