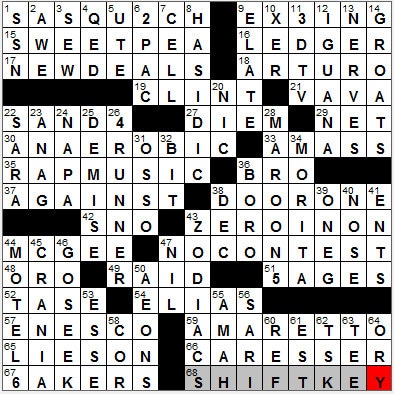 CROSSWORD SETTER: Ian Livengood
THEME: SHIFT KEY … this is a rebus puzzle with a twist. The rebus squares contain a number which is used for the down answers. The across answers use the symbol associated with that number that is accessed on a keyboard by pressing the SHIFT KEY:

68A. Something that’s pressed, which helps explain this puzzle’s theme : SHIFT KEY


Today’s Wiki-est, Amazonian Googlies
Across
1. Mysterious figure : SASQU(AT)CH
A yeti is a beast of legend, also called an abominable snowman. “Yeti” is a Tibetan term, and the beast is fabled to live in the Himalayan regions of Nepal and Tibet. Our equivalent legend in North America is that of Bigfoot, also known as sasquatch. The study of animals whose existence have not yet been substantiated is called cryptozoology.

18. Maestro Toscanini : ARTURO
Arturo Toscanini was an Italian conductor of classical music. Toscanini took up the baton for the first time under sensational circumstances in 1886. He was attending a performance of “Aida” in Rio de Janeiro in the role of the assistant chorus master, on a night when a substitute conductor was leading the orchestra. The substitute was in charge because the lead conductor had been forced to step down by striking performers who would not work with him. The disgruntled lead conductor led the audience in booing the unfortunate substitute, forcing him off the stage. Yet another substitute attempted to lead the performance, but he could not overcome the hostility of the crowd. The musicians themselves begged Toscanini to take up the baton, for the first time in his life, simply because he knew the score by heart. After over an hour of mayhem, Toscanini led the company in a remarkable performance to marvelous acclaim. He had just launched his conducting career.

19. Country singer Black : CLINT
Clint Black is a country music singer. Black was born in New Jersey, but grew up in Texas.

22. Potential beach find : SAND (DOLLAR)
A sand dollar is a burrowing sea urchin found just below the low water line of sandy or muddy beaches. Sand dollars have a hard skeleton, which is often found washed up on beaches.

30. Kind of bacteria : ANAEROBIC
Anaerobic organisms are those that do not require oxygen to live. A good example would be the bacteria working away in a septic tank. It’s fortunate that these bacteria are anaerobes, otherwise the septic tank would have to be opened up to the air.

35. Vibe magazine subject : RAP MUSIC
“Vibe” is a magazine that focuses on R&B and rap artists. “Vibe” was founded by the great record producer Quincy Jones, in 1993.

42. ___-Caps : SNO
Sno-Caps are a brand of candy usually only available in movie theaters. Sno-caps have been around since the twenties, would you believe?

44. 1985 N.L. M.V.P. Willie : MCGEE
Willie McGee is a retired professional league baseball player, who spent most of his career with the St. Louis Cardinals.

47. Court plea : NO CONTEST
“Nolo contendere” is a legal term that translates from the Latin as “I do not wish to contend”. It’s the plea of “no contest”, an alternative to “guilty” or “not guilty” meaning that one doesn’t admit guilt but nor does one dispute the charge.

52. Stun, as a suspect : TASE
Victor Appleton wrote a novel for young adults called “Tom Swift and His Electric Rifle”. The company that developed the TASER electroshock weapon named their product as a homage to the novel, as TASER stands for “Thomas A. Swift’s Electric Rifle”. Interesting, eh?

54. Mount Saint ___, fourth-highest peak in North America : ELIAS
The peak of Mount Saint Elias sits about 25 miles from Mount Logan, the highest mountain in Canada. Mount Saint Elias actually straddles the border between the Canadian province of Yukon and the American state of Alaska.

59. Tiramisu flavorer : AMARETTO
Amaretto is an Italian liqueur with a sweet almond flavor. Even though the drink is sweet, it has a bitterness lent to it by the bitter almonds that are often used as a flavoring. The name “amaretto” is a diminutive of the Italian “amaro” meaning “bitter”.

Tiramisu is an Italian cake. The name “tiramisu” translates from Italian as “pull me up”.

Down
1. Identity theft target: Abbr. : SSN
The main purpose of a Social Security Number (SSN) is to track individuals for the purposes of taxation, although given its ubiquitous use, it is looking more and more like an “identity number” to me. The social security number system was introduced in 1936. Prior to 1986, an SSN was required only for persons with substantial income so many children under 14 had no number assigned. For some years the IRS had a concern that a lot of people were claiming children on their tax returns who did not actually exist. So, from 1986 onward, it is a requirement to get an SSN for any dependents over the ago of 5. Sure enough, in 1987 seven million dependents “disappeared”.

4. Proof finish : QED
QED is used at the end of a mathematical proof or a philosophical argument. The acronym stands for the Latin “quod erat demonstrandum” meaning “that which was to be demonstrated”.

5. Western native : UTE
The Ute is a group of Native American tribes that now resides in Utah and Colorado. The Ute were not a unified people as such, but rather a loose association of nomadic groups.

6. Big name in 35-Across : 2PAC
Rapper Tupac Amaru Shakur adopted the inventive stage name “2Pac”. He was a hard man, spending eleven months in prison for sexual assault. At only 25 years of age he was killed in a drive-by shooting in Las Vegas.

8. Like some observant Brooklynites : HASIDIC
The Hasidic Jewish movement was founded in the 18th century by Baal Shem Tov, a mystical rabbi from Eastern Europe.

10. Gen ___ : XER
The term Generation X originated in the UK where it was the name of a book by Jane Deverson. Her book detailed the results of a study of British youths in 1964, contrasting their lifestyle to those of previous generations. It was Canadian author Douglas Coupland who was responsible for popularizing the term, with his more successful publication “Generation X: Tales for an Accelerated Culture”. By the latest accepted definition, Gen-Xers were born between 1961 and 1981.

11. Reason to wear glasses at home? : 3DTV
3D televisions are available these days, but almost all of them require the viewer to use special glasses for the effect to work.

12. Galápagos creature : IGUANA
An iguana is a lizard, and as such is cold-blooded. There are times when pet iguanas need heat from a UV lamp to maintain body temperature.

14. Hulled grain : GROATS
Groats are the hulled grains of various cereals. For example there are wheat groats, also known as “bulgar”.

20. Cage, informally : NIC
Nic Cage was born Nicolas Coppola. He is the nephew of director Francis Ford Coppola and actress Talia Shire, both of whom are his father’s siblings.

22. Poet Teasdale : SARA
Sara Teasdale was a poet from St. Louis, Missouri although she spent much of her adult life in New York City. Examples of Teasdale’s most famous poems are “There Will Come Soft Rains” and “I Shall Not Care”. Teasdale committed suicide in 1933 by taking an overdose of sleeping pills.

26. Toyota model beginning in 1984 : 4RUNNER
The 4Runner is a midsize SUV from Toyota. The 4Runner was sold in Japan as the Toyota Hilux Surf.

28. Band with the 2004 hit “She Will Be Loved” : MAROON 5
Maroon 5 is a rock band from LA. Most of the band members met in high school where they formed a garage band called Kara’s Flowers in 1995. The band reformed as Maroon 5 in 2001 and were a big hit almost straight away. Personally, I’ve never heard of them till now …

34. Oscar-nominated Pat : MORITA
Pat Morita was a Japanese-American actor, born in Isleton, California. Morita’s most noted roles were playing “Arnold” on TV’s “Happy Days”, and Mr. Miyagi in “The Karate Kid” movies. Morita was just a child during WWII and spent most of it in the Gila River internment camp in Arizona with this family

36. Any one of five in the Big Apple : BORO
Apparently the first published use of the term “Big Apple” to describe New York City dates back to 1909. Edward Martin wrote the following in his book “The Wayfarer in New York”:

39. Universal donor’s blood type, briefly : O-NEG
The most important grouping of blood types is the ABO system. Blood is classified as either A, B, AB or O, depending on the type of antigens on the surface of the red blood cells. A secondary designation of blood is the Rh factor, in which other antigens are labelled as either positive or negative. When a patient receives a blood transfusion, ideally the donor blood should be the same type as that of the recipient, as incompatible blood cells can be rejected. However, blood type O-neg can be accepted by recipients with all blood types, A, B, AB or O, and positive or negative. Hence someone with O-neg blood type is called a “universal donor”.

41. Specialty docs : ENTS
An Ear, Nose and Throat specialist is an ENT.

44. Red Roof Inn competitor : MOTEL 6
The ubiquitous Motel 6 is the largest owned and operated hotel chain in North America. The chain was founded in Santa Barbara, California in 1962 by two building contractors. Their idea was to offer budget accommodation for just $6 per night, hence the name Motel 6.

50. Almost an eternity : AEONS
Aeon is a variant spelling of “eon”. In astronomical terms, an aeon is defined as one thousand million years.

55. Asian nurse : AMAH
“Amah” is an interesting word, one that we associate so much with Asian culture and yet it actually comes from the Portuguese “ama” meaning “nurse”. Ama was imported into English in the days of the British Raj in India when a wet-nurse became known as an “amah”.

56. Asian attire : SARI
The item of clothing called a sari (also saree) is a strip of cloth, as one might imagine, unusual perhaps in that is unstitched along the whole of its length. The strip of cloth can range from four to nine meters long (that’s a lot of material!). The sari is usually wrapped around the waist, then draped over the shoulder leaving the midriff bare. I must say, it can be a beautiful item of clothing.

58. One of two N.T. books : COR
The seventh and eighth books of the New Testament are the First and Second Epistles to the Corinthians.