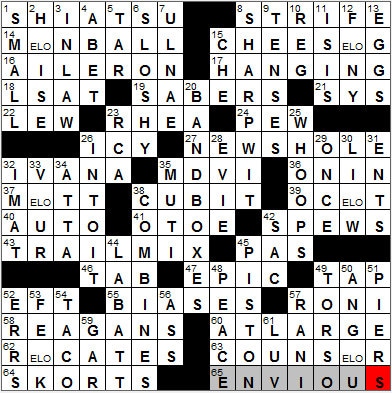 CROSSWORD SETTER: Elizabeth C. Gorski
THEME: BANDBOXES … today’s crossword is a rebus puzzle, with the letters ELO in some squares. With ELO being a BAND, and each square being a BOX, then the puzzle’s theme is BAND BOXES.
COMPLETION TIME: 30m 29s
ANSWERS I MISSED: 0

22. “Holiday” actor Ayres : LEW
The Hollywood actor Lew Ayres got his big break in “All Quiet On the Western Front”. Famously, he was a pacifist during WWII and served with the Medical Corps. His private life wasn’t too dull. He was married three times, Lola Lane and Ginger Rogers being wives one and two. Lew Ayres was also the man for whom actress Jane Wyman left her husband, Ronald Reagan, although that relationship did not go very far.

“Holiday” is charming 1938 romantic comedy film starring the classic pairing of Katharine Hepburn and Cary Grant. The movie is based on a play of the same name by Philip Barry. Katharine Hepburn was actually the understudy for the female lead role in “Holiday” on Broadway, and even played the part for a single performance.

27. Amount of space in a paper to be filled with journalism : NEWS HOLE
“News hole” is a slang term for the space left in a newspaper for the actual news, the small amount of space left after all of the advertisements have been placed …

32. A Trump : IVANA
Ivana Winklmayr was born in Czechoslovakia. She was an excellent skier, and was named as an alternate for the 1982 Czech Olympic Team. She was promoting the Montreal Olympics in New York in 1976 when she met Donald Trump. Ivana and Donald’s marriage was very public and well-covered by the media, but not nearly so well as their very litigious divorce in 1990.

35. Year Christopher Columbus died : MDVI
Christopher Columbus had a contract with King Ferdinand and Queen Isabella before he set off on his voyages of discovery. According to the terms, he not only received a percentage of the revenue earned from any discovered lands, but he was also appointed Viceroy and Governor of the new territories. After his first voyage he therefore earned the title of Viceroy and Governor of the Indies (the land that he wrongly assumed was part of Asia, the goal of his travels).

38. Ancient measure : CUBIT
The ancient unit of length called a cubit was chosen as the length of the forearm. In some cultures a cubit was divided into 7 palms, the width of the hand excluding the thumb.

39. Certain wildcat : OCELOT
The ocelot is found mainly in South and Central America, although there have been sightings as far north as Arkansas. An ocelot doesn’t look too different from a domestic cat, and some have been kept as pets. Perhaps most famously, Salvador Dali had one that he brought with him everywhere.

45. ___-de-Calais (French department) : PAS
Pas-de-Calais is a department in the very north of France, home to the coastal city of Calais. It was a key location in the Allied plan to invade Europe in WWII in that there was a deceptive plan developed to invade Pas-de-Calais, to take away attention from the actual target, the beaches of Normandy.

46. Keyboard key : TAB
Like most features on our computer keyboards, the tab key is a hangover from the days of typewriters. When using a typewriter, making entries into a table was very tedious as it involved lots of tapping on the space bar and backspace key. So, a lever was added to typewriters that allowed the operator to “jump” across the page to positions that could be set by hand. Later this was simplified to a tab key which could be depressed, causing the carriage to jump to the next tab stop in much the same way that the modern tab key works on a computer.

52. Wee amphibian : EFT
Newts wouldn’t be my favorite animals. They are found all over the world, living on land or in water depending on the species, but always associated with water even if it is only for breeding. Newts metamorphose through three distinct developmental stages during their lives. They start off as larvae in water, fertilized eggs that often cling to aquatic plants unlike the eggs of frogs and toads which float freely. The eggs hatch into tadpoles, the first developmental form of the newt. After living some months as tadpoles swimming around in the water, they undergo another metamorphosis, sprouting legs and replacing their external gills with lungs. At this juvenile stage they are known as efts, and leave the water to live on land. A more gradual transition takes place then, as the eft takes on the lizard-like appearance of the adult newt.

57. Noodle ___ : RONI
Noodle Roni was a derivative product of Rice-A-Roni based on the classic recipe of Noodles Alfredo. Noodle Roni was renamed to Pasta Roni in 1995. Never tried it …

64. Hybrid articles of apparel : SKORTS
Skorts are a hybrid between shorts and a skirt.

65. Green, in a way : ENVIOUS
William Shakespeare was one of the first to associate the color green with envy. He called jealousy the “green-eyed monster” in his play, “Othello”.

Down
1. Trivial : SMALL
Trivia are things of little consequence. “Trivia” is the plural of the Latin word “trivium” which means “a place where three roads meet”. Now that’s what I call a trivial fact …

2. Provider of hints : HELOISE
Today we read the second generation of the “Hints from Heloise” advice column. The current author is Poncé Kiah Marchelle Heloise Cruse Evans (would you believe?). She took over the column when her mother passed away in 1977. The original column was started back in 1959 by Heloise Bowles. It first appeared in the “Honolulu Advertiser” under the name “Readers Exchange”.

4. Help in wrongdoing : ABET
The word “abet” comes into English from the Old French “abeter” meaning “to bait” or “to harass with dogs” (it literally means “to make bite”). This sense of encouraging something bad to happen morphed into our modern usage of “abet” meaning to aid or encourage someone in a crime.

8. Dorothy Parker attribute : SHARP WIT
Dorothy Parker was a poet and satirist, a founding member of the Algonquin Round Table. After the famed meetings at the Algonquin Hotel ceased, Parker headed to Hollywood where she became a successful screenwriter, earning two Oscar nominations. However she ended up on the Hollywood blacklist for being involved in left-wing politics.

11. Nile deity : ISIS
Isis was the ancient Egyptian goddess of fertility, as well as the protector of the dead and the goddess of children.

15. “Evita” role : CHE
“Evita” was the followup musical to “Jesus Christ Superstar” for Andrew Lloyd Weber and Time Rice. Both of these works were originally released as album musicals, and very successful ones at that (I remember buying them when they first came out). For the original album’s cast of “Evita” they chose Irish singer Colm Wilkinson (or C. T. Wilkinson, as we know him back in Ireland) to play “Che”, the narrator of the piece.

28. 1960s singer Sands : EVIE
Evie Sands is a singer from Brooklyn, New York. Sands is also a noted songwriter, having penned songs that have been recorded by the likes of Barbra Streisand, Gladys Knight, Karen Carpenter, Linda Ronstadt and Dusty Springfield.

31. Tolkien tree creatures : ENTS
Ents are those tree-like creatures that live in J. R. R. Tolkien’s Middle-earth, in his series of books “The Lord of the Rings”. “Ent” is an Old English word for “giant”.

44. Canada’s largest brewery : LABATT
The Labatt Brewing Company is the largest brewer in Canada. The company was founded by John K. Labatt in London, Ontario in 1847.

45. Engine part : PISTON
In an internal combustion engine, pistons move up and down in cylinders and turn a crankshaft and create motion. The pistons are a fairly tight fit in the cylinders, but still there needs to be a reasonable gap in order for a piston not to jam. The gap is sealed by piston rings, metal rings that are split and compressed in order to fit in the space. The rings act as seal so that gas doesn’t escape through the gap between the piston and the cylinder.

49. Trunk : TORSO
“Torso” is an Italian word meaning the “trunk of a statue”, which we imported into English.

50. Poet with a role in “Roots” : ANGELOU
Maya Angelou is an African-American autobiographer and poet. She recited her poem “On the Pulse of Morning” at the inauguration of President Clinton in 1983.

54. ___ Bell : TACO
Taco Bell was founded by a former US Marine, 25-year-old Glen Bell. His first restaurant was Bell’s Drive-In, located in Southern California. After opening that first establishment, Bell bought up some more restaurants including four named El Taco. He sold off the El Taco restaurants but used the name in part when he opened his first Taco Bell in 1962. Bell sold then sold franchises, with the 100th Taco Bell opening in 1967. The ex-Marine sold off the whole chain to PepsiCo in 1978, and I am guessing he made a pretty penny.

57. Eastern royal : RANI
A ranee (also spelled rani) is the female equivalent of a raja in India.

59. Air-gulping fish : GAR
The fish known as a gar is very unusual in that it is often found in very brackish water. What is interesting about gar is that their swim bladders are vascularized so that they can actually function as lungs. So many species of gar can be seen coming to the surface and taking a gulp of air. This adaptation makes it possible for them to live in conditions highly unsuitable for other fish that must rely on their gills to get oxygen. Indeed, quite interesting …