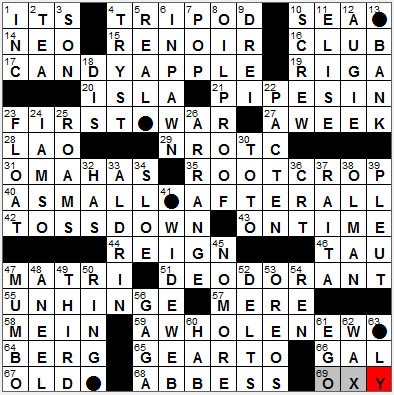 CROSSWORD SETTER: Julian Lim
THEME: IT’S A SMALL WORLD … this is a rebus puzzle, with the word WORLD used in some squares (represented by a black disk in the grid):


Today’s Wiki-est, Amazonian Googlies
1. With 40-Across, a chorus line … or a hint to this puzzle’s theme : IT’S
(40. See 1-Across : A SMALL (WORLD) AFTER ALL)
It’s a Small World is the name of a surprisingly (to me!) popular ride in Disneyland. The ride was created for the 1964 World’s Fair that was held in New York, and was moved to Disneyland in 1966 after the fair closed. The song that accompanies the ride was written soon after the Cuban Missile Crisis, and the message of peace in the lyrics perhaps reflects the “sigh of relief” that pervaded the globe at the time. The song actually gives its name to the ride, which was going to be called “Children of the World”.

10. Where dolphins perform tricks : SEA(WORLD)
SeaWorld was started in San Diego in 1964. The original plan was build an underwater restaurant with a marine life show. Eventually the founders dropped the idea of the eating establishment and just went with a theme park.

15. Painter of many nudes : RENOIR
Pierre-Auguste Renoir was a French painter, very much at the forefront of the Impressionist Movement. Renoir was a prolific artist, with several thousand works attributed to him. The largest collection of Renoirs is actually in the United States. You can see 181 of his paintings at the Barnes Foundation just outside Philadelphia.

16. Kind of sandwich : CLUB
The club sandwich is a double-decker affair with three layers of bread and two layers of filling. This style of sandwich has been around since the end of the 19th century, and some say it was invented at an exclusive gambling “club” in Saratoga Springs, New York.

17. Snack on a stick : CANDY APPLE
Here’s another term I had to learn when I came to the US: candy apple. Candy apples are called toffee apples outside of North America.

19. Capital city on the Daugava River : RIGA
Riga is the capital city of Latvia. The historical center of Riga is a UNESCO World Heritage Site, declared as such because of the city’s magnificent examples of Art Nouveau architecture.

20. ___ de Margarita : ISLA
Isla de Margarita (Margaret Island) is in Venezuela, and is the largest island in the state of Nueva Esparta in the Caribbean Sea. Christopher Columbus was the first European to land on the island, in 1498. The natives welcomed Columbus and his crew with open arms, a welcome they were soon to regret. The island was ruled quite brutally by the Spanish for many years.

23. The Treaty of Versailles ended it : FIRST (WORLD) WAR
The 1919 Treaty of Versailles ended the war between Germany and the Allied Powers, and was the most significant treaty signed at the end of WWI. The war itself ended in November of 1918, but it took six months of negotiations at a peace conference in Paris to hammer out a peace treaty. The treaty called for reparations to paid by Germany to the Allies, an amount so heavy that it could have taken Germany until the 1980s to settle the debt in full. As it turned out, the agreement was not honored consistently by Germany, and when Adolf Hitler came to power, reparation payments were halted altogether.

27. Hebdomadally : A WEEK
The adjective “hebdomadal” means “weekly”. “Hebdomas” is Greek for the number seven.

28. Southeast Asian language : LAO
The official name for the country of Laos is the Lao People’s Democratic Republic. In the Lao language, the name is “Meuang Lao”. The French ruled the country as part of French Indochina, having united three separate Lao kingdoms. As there was a plural of “Lao” entities united into one, the French added the “S” and so today we tend to use “Laos” instead of “Lao”.

31. Oto neighbors : OMAHAS
The Omaha Nation was one of the most welcoming of the Native American tribes, never resisting the influx of European explorers and traders. They even fought alongside Union troops during the American Civil War, and have stood by the US people ever since. Regardless, the Omaha people lost most of their land and now reside on the Omaha Reservation in northeastern Nebraska and western Iowa.

The Otoe (also Oto) Native American tribe originated in the Great Lakes region as part of the Winnebago or Siouan tribes. The group that would become the Otoe broke away from the Winnebago and migrated southwestwards ending up in the Great Plains. In the plains the Otoe adopted a semi-nomadic lifestyle dependent on the horse, with the American bison becoming central to their diet.

46. Sigma follower : TAU
Tau is the 19th letter of the Greek alphabet, the letter which gave rise to our Roman “T”. Both the letters tau (T) and chi (X) have long been symbolically associated with the cross.

Sigma is the eighteenth letter of the Greek alphabet, and is the one used for an “ess” sound.

51. Secret, e.g. : DEODORANT
Secret is an antiperspirant/deodorant made by Proctor & Gamble, first introduced in 1956 as a cream that was applied with the fingers (ick!). There followed a roll-on version in 1958, a spray in 1964 and the solid stick in 1978.

59. Oscar-winning song from “Aladdin” : A WHOLE NEW (WORLD)
The Disney animated feature “Aladdin” was released in 1992 and is one of the best features to come out of the studio, in my opinion, largely due to the great performance by Robin Williams who voiced the Genie. “Aladdin” was the most successful film of 1992, earning over $500 million worldwide, an unusual feat for an animated movie.

69. ___ 10 (acne-fighting medicine) : OXY-
Oxy-10 is a brand name for a medication with the active ingredient benzoyl peroxide. Benzoyl peroxide is used as an acne treatment, for dyeing hair, for whitening teeth, and is used in the preparation of flour.

Down
4. Lovers’ plan : TRYST
In its most general sense, a tryst is a meeting at an agreed time and place. More usually it is associated with a prearranged meeting between lovers. The term comes from the Old French “triste”, a waiting place designated when hunting.

7. Result of rampant inflation? : POP
Inflate the balloon until it pops.

11. Beethoven honoree : ELISE
“Fur Elise” is a beautiful piece of music written by Beethoven, and is also known as “Bagatelle in A Minor”. “Fur Elise” means simply “For Elise” but sadly, no one knows the identity of the mysterious Elise.

13. Group making billion-dollar loans : (WORLD) BANK
The World Bank Group was formed in 1945 with the mission of making leveraged loans, mainly to poorer countries. The first loan made by the World Bank was its largest to date, a loan to France to help with post-war construction.

22. Arizona and Arizona State joined it in ’78 : PAC-TEN
Pac-12 an abbreviation for the Pacific-12 Conference, a college athletic conference in the western US. The Pac-12 has won more NCAA National Team Championships than any other conference. The Pac-12 was founded in 1915 as the Pacific Coast Conference (PCC). Over time as it grew,  the conference went by the names Big Five, Big Six, Pacific-8, Pacific-10 and became the Pacific-12 in 2011.

25. Is peripatetic : ROAMS
The adjective “peripatetic” means travelling on foot, or walking from place to place. The term comes from a Latin word that was applied to the disciples of Aristotle. Aristotle had the habit of teaching while strolling through the public meeting place in Athens. The Latin term comes from the Greek “peripatetikos” meaning “given to walking about”.

33. Apollo 11 astronaut : ALDRIN
Buzz Aldrin is a true American hero, I’d say. He flew 66 combat missions in Korea, shot down two MiGs, earned his Sc. D. degree from MIT, and was one of the two men who landed on the moon for the first time. Now that man, he has a lived a life worth living.

34. Plum look-alike : SLOE
The sloe is the fruit of the blackthorn bush, and is the flavoring that gives gin its distinctive taste.

36. Old PC part : CRT
Cathode Ray Tube (CRT). There aren’t may of them around in the stores these days …

37. Indian sauce with coriander and cumin : RAITA
Raita is a condiment served in Indian restaurants, made from yogurt flavored with coriander, cumin, mint and cayenne pepper.

38. “___ River” : OL’ MAN
“Ol’ Man River” is a wonderful song by Jerome Kern and Oscar Hammerstein, from the musical “Show Boat”. The most famous performances of the song were by Paul Robeson, starting in 1938 when he appeared in a movie version of the stage show. Over the years Robeson changed the lyrics as he sang it at various recitals. The original words used a lot of racial epithets and stereotypical African American slang that he decided to change or omit.

47. Jumbo beginning? : MUMBO
“Mumbo jumbo” means big and empty talk, and is a term that we’ve been using since the late 1800s. Supposedly the term comes from a Mandingo word for an idol that was worshipped by some tribes in Africa.

49. Place for a yellow ribbon : THIRD
Ribbons are often awarded in competitions to the winners. In the US, first, second and third place get blue, red and yellow ribbons in that order. In Canada, the same awards are red for first, then blue and yellow.

50. 1970 Hugo Award-winning novel by Larry Niven : RING (WORLD)
“Ring World” is a sci-fi novel by Larry Niven, first published in 1970. After the success of “Ring World”, Niven wrote three sequels and four prequels. The “ring” in the title refers to a huge artificial ring that encircles a star providing a habitable environment.

52. Shoulder muscles, for short : DELTS
The deltoid muscle is actually a group of muscles, the ones that cover the shoulder and create the roundness under the skin. The deltoid is triangular in shape resembling the Greek letter delta, hence the name.

53. Many people like to take these apart : OREOS
The Oreo was the biggest selling cookie in the 20th century, and almost 500 billion of them have been produced since they were introduced in 1912 by Nabisco. In those early days the creme filling was made with pork fat, but today vegetable oils are used instead. If you take a bite out of an Oreo sold outside of America you might notice a difference from the homegrown cookie, as coconut oil is added abroad to give a different taste.

56. Lady ___ : GAGA
I’ve seen Lady Gaga interviewed on television a few times, and she sure is “unique”. Her music is of course out of my league, but she does know how to put on a show.

60. Old Testament book before Zephaniah: Abbr. : HAB
Habakkuk was one of the so called minor prophets, and author of the Book of Habakkuk in the Hebrew Bible.