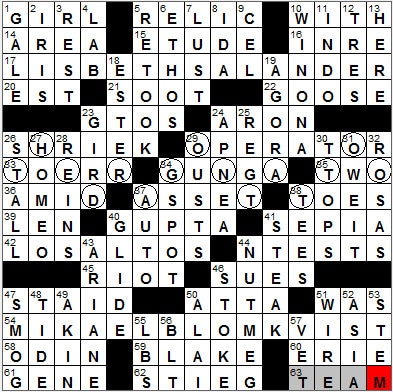 CROSSWORD SETTER: Adam G. Perl
THEME: THE GIRL WITH THE DRAGON TATTOO … all the theme answer relate to the incredibly successful novel “The Girl with the Dragon Tattoo”, and the book’s title is (almost) spelled out by two answers at the top of the grid (GIRL WITH) and the “dragon-like” circled letters across the center of the grid:


Today’s Wiki-est, Amazonian Googlies
1. With 10-Across and the circled letters, a best-selling novel, with “The” : GIRL
10. See 1-Across : WITH
“The Girl with the Dragon Tattoo” is a sensational hit novel by the Swedish author Stieg Larsson, originally titled in Swedish as “Men Who Hate Women”. It is the first in a trilogy of successful books, all of which were only published after his death.

15. Musical exercise : ETUDE
An étude is a small instrumental composition that is usually quite hard to play and is intended to help the performer master a particular technique. Étude is the French word for “study”. Études are commonly performed on the piano.

17. Heroine of 1-/10-Across, etc. : LISBETH SALANDER
Lisbeth Salander is one of the two main characters in Stieg Larsson’s Millennium series of books, the first if which is “The Girl with the Dragon Tattoo”. Salander is not a very socially adept person, and is a very capable computer hacker. One of her main goals seems to be exposing and punishing men who abuse women.

22. One taking a gander? : GOOSE
To take “a gander” is to take a long look. It’s a term we’ve been using since the 1880s and comes from the idea that in taking a long look one might be craning one’s neck like a goose (or gander).

24. The King’s middle name : ARON
Elvis Aron Presley was the younger of two identical twins. His brother was stillborn, delivered 35 minutes before Elvis. The brother was named Jesse Garon Presley. So though born a twin, Elvis was raised as an only child.

34. Kipling’s “___ Din” : GUNGA
“Gunga Din” is an 1892 poem penned by Rudyard Kipling. The poem tells of a British soldier in colonial India and a native water-bearer who saves his life. We tend to pronounce the water bearer’s name as Gunga Din, with the “din” just as it’s written, like the loud noise. Based on the rhymes in the poem however, we should be pronouncing it “deen”.

Rudyard Kipling was a British poet and writer who was famous for his tales of the British Raj, the rule of the British Empire in India. Kipling was actually born in Bombay, but returned with his family to England when he was very young. After being educated in England, he returned to India and from there travelled the world. Kipling’s most famous works are the stories “The Jungle Book”, “Just So Stories”, “The Man Who Would Be King”, and the poems “Mandalay”, “Gunga Din” and “If-”.

39. Actor Cariou : LEN
Len Cariou is a Canadian actor, famous for his Broadway portrayal of “Sweeney Todd”. I most recognize him from supporting roles in “Flags of Our Fathers” and “Thirteen Days”, two great movies.

40. TV doctor Sanjay : GUPTA
Sanjay Gupta is an American neurosurgeon, and is best known as the CNN’s chief medical correspondent. In 2009, Gupta was offered the post of Surgeon General in the Obama administration, but he declined.

41. Old photo tint : SEPIA
Sepia is that lovely rich, brown-grey color so common in old photographs. The name sepia comes from the pigment derived from the ink sac of the cuttle fish, with “sepia” being the Latinized version of the Greek word for cuttlefish. The sepia tone of old photographs is not a result of deterioration over time. Rather, it is the result of a deliberate preservation process which converts the metallic silver in the photographic image to a more stable silver sulfide. Sepia-toned prints can last in excess of 150 years.

42. Silicon Valley city : LOS ALTOS
Los Altos is a wealthy city located not far from here, and is a largely residential community serving Silicon Valley and San Francisco. “Los Altos” is Spanish for “the heights”.

44. 1940s Bikini blasts, for short : N-TESTS
The first test of a hydrogen bomb was in 1954 at Bikini Atoll in the Marshall Islands. The test may have been a technical success but it was an environmental disaster, largely because the actual yield of 15 megatons was unexpected (the military anticipated only 4-6 megatons). The resulting nuclear fallout caused many deaths and led to birth defects in generations to come.

54. Hero of 1-/10-Across, etc. : MIKAEL BLOMKVIST
Mikael Blomkvist is one of the two main characters in the Stieg Larsson Millennium series of books. Blomkvist is an investigative journalist and co-owner of the “Millennium” magazine, which gives its name to the series of novels.

58. God of war and magic : ODIN
In Norse mythology, Odin was the chief of the gods. His wife Frigg was the queen of Asgard and the deity that gave us our English term Friday (via Anglo-Saxon). Odin’s son was Thor, and he gave us the term Thursday.

59. English Romantic poet William : BLAKE
William Blake was an English poet and artist, considered now have been a powerful force in his fields during the Romantic Age. One of his more famous poems is “The Tyger”, which has the celebrated lines:

60. Canal of song : ERIE
The song “Fifteen Miles on the Erie Canal” was written in 1905. The lyrics are nostalgic and look back to the days when traffic on the canal was pulled by mules, bemoaing the introduction of the fast-moving engine-powered barges. The first line is “I’ve got an old mule and her name is Sal”.

61. Part of a pool : GENE
A gene is a section of a chromosome that is responsible for a particular characteristic in an organism. For example, one gene may determine eye color and another balding pattern. We have two copies of each gene, one from each of our parents, with each copy known as an allele.

62. Author Larsson of 1-/10-Across, etc. : STIEG
Stieg Larsson was a Swedish journalist and writer, and indeed one of his main characters in his Millennium series of novels is a journalist as well. The last of the three titles in the Millennium series is “The Girl Who Kicked the Hornet’s Nest”, which was the most-sold book in the US in 2010. All of the books in the series were published after Larsson’s death. He passed away from a heart attack while climbing several flights of stairs, when he was just 50 years old.

Down
2. Rainbow goddess : IRIS
In Greek mythology the goddess Iris was viewed as the link between the gods and humanity, a messenger. She was also the goddess of the rainbow.

8. Gilbert and Sullivan princess : IDA
“Princess Ida; or, Castle Adamant” is a Gilbert & Sullivan comic opera. It was first performed in 1884 at the Savoy Theatre in London that was famous for staging the duo’s works.

9. Cartoon frame : CEL
In the world of animation a cel is a transparent sheet on which objects and characters are drawn. In the first half of the 20th century the sheet was actually made of celluloid, giving the “cel” its name.

10. Actress Ryder : WINONA
The Hollywood actress Winona Ryder’s real name is Winona Horowitz. Ryder was born near the town of Winona in Minnesota, from which she got her name. Her success on the screen has garnered as much media attention as her life off the screen. The papers had a field day when she was arrested in 2001 on a shoplifting charge, and then went through a very public court appearance. Her engagement with Johnny Depp in the early nineties was another media frenzy. Depp had “Winona Forever” tattooed on his arm, which he had changed after the breakup to “Wino Forever”. A man with a sense of humor …

18. Fragrant compound : ESTER
Esters are very common chemicals. The smaller, low-molecular weight esters are usually pleasant smelling and are often found in perfumes. At the other end of the scale, the higher-molecular weight nitroglycerin is a nitrate ester and is very explosive, and polyester is a huge molecule and is a type of plastic.

19. Public place in Athens : AGORA
In early Greece the “agora” was a place of assembly. Often the assemblies held there were quite formal, perhaps for the reading of a proclamation. Later in Greek history, things became less formal as the agora evolved into a market place. Our contemporary word “agoraphobia” comes from these agorae, in the sense that a sufferer has a fear of open spaces, a fear of “public meeting places”.

23. Encircle : GIRD
The phrase “gird your loins” dates back to Ancient Rome. It describes the action of lifting “one’s skirts” and tying them between the legs to allow more freedom of movement before going into battle. Nowadays, “gird your loins” means “prepare yourself for the worst”.

24. Sleeper’s problem : APNEA
Sleep apnea can be caused by an obstruction in the airways, possibly due to obesity or enlarged tonsils.

27. Prefix with -pathy : HOMEO-
Homeopathy is an alternative medicine, one that focuses on the use of highly diluted preparations.

30. Some sports car features : T-TOPS
A T-top is a car roof that has removable panels on either side of a rigid bar that runs down the center of the vehicle, above the driver.

34. “The ___ and Other Recent Discoveries About Human Sexuality” (1982 best seller) : G-SPOT
The full name for the G-Spot is the “Gräfenberg Spot”, named after German doctor Ernst Gräfenberg. Gräfenberg is best known for developing the intrauterine device (IUD).

“The G Spot and Other Recent Discoveries About Human Sexuality” is a best-selling and controversial book by a trio of academics, first published in 1982. The book created a bit of a firestorm in its day, with many professionals arguing that some of the sexual phenomena described were based purely on anecdotal evidence.

41. Porterhouse, for one : STEAK
The T-bone and porterhouse are related cuts of meat, with the latter being a larger version of the former (I think … I don’t eat meat!).

43. 1906 Massenet opera based on Greek myth : ARIANE
“Ariane” was not the most successful work by Jules Massenet, that’s for sure. “Ariane” has rarely been performed since its opening in 1906 in Paris. A few years after the debut of “Ariane”, Massenet introduced most of the same characters in another opera named “Bacchus”. “Bacchus” doesn’t get performed much either …

44. Mace source : NUTMEG
The fruit of the nutmeg tree yields two very different spices. What we call “nutmeg” comes from the seed of the tree. “Mace” is the dried covering of the seed.

47. Factor in an air quality rating : SMOG
“Smog” is of course a portmanteau word formed by melding “smoke” and “fog”. The term was first used to describe the air around London in the early 1900s.

50. Jai ___ : ALAI
Even though jai alai is often said to be the fastest sport in the world because of the speed of the ball, in fact golf balls usually get going at a greater clip.

56. Deli order, for short : BLT
The BLT (bacon, lettuce and tomato) is the second most popular sandwich in the US, after the plain old ham sandwich.