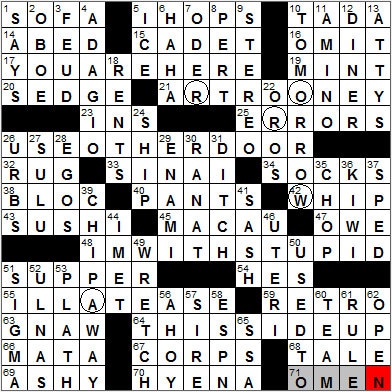 CROSSWORD SETTER: Milo Beckman
THEME: ARROW … there is a note with today’s puzzle that reads:

The circled letters in this puzzle, when read in the correct order, spell the name of a shape. The four unclued answers are common three-word phrases usually accompanied by this shape.

The circled letters spell out the word “ARROW”, and the unclued answers work with the clue “Words accompanying an arrow”:


Today’s Wiki-est, Amazonian Googlies
1. Furniture on which a guest might sleep : SOFA
“Sofa” is a Turkish word meaning “bench”.

20. Marsh plant : SEDGE
Sedges are a family of plants that resemble grasses and rushes. Sedges are more properly called Cyperaceae.

33. Mount in Exodus : SINAI
In the Book of Deuteronomy, it is stated that Moses was given the Ten Commandments on Mount Horeb. In other parts of the Bible the same event is described as taking place on Mount Sinai. So, many think that Horeb is an alternative name for Sinai.

43. Food often eaten with chopsticks : SUSHI
Sushi is a Japanese dish that has as its primary ingredient cooked, vinegared rice. The rice is usually topped with something, most often fish, and can be served in seaweed rolls. If you want raw fish by itself, then you have to order “sashimi”.

54. “For ___ a jolly …” : HE’S
“For He’s a Jolly Good Fellow” is the second-most popular song in the English language, according to the “Guinness Book of World Records”. Top of the list is “Happy Birthday to You”, and third comes “Auld Lang Syne”.

66. ___ Hari : MATA
Mata Hari was the stage name used by Margaretha Geertuida Zella, born in the Netherlands in 1876. After an unsuccessful and somewhat tragic marriage, Zella moved to Paris in 1903 where she struggled to make a living. By 1905 she was working as an exotic dancer and using the name Mata Hari. She was a successful courtesan, notably moving in various circles of high-ranking military officers. She apparently worked as a double agent, both for the French and the Germans. When she was accused by the French of passing information to the enemy, she was tried, found guilty and executed by firing squad at the height of WW1 in 1917.

67. Peace ___ : CORPS
The Peace Corps is an organization of American volunteers that is run by the US government. The Peace Corps was established by President Kennedy in 1961, and has a three-part mission:

1. Providing technical assistance
2. Helping people outside the US to understand American culture
3. Helping Americans to understand the culture of other countries

68. Poe writing : TALE
Edgar Allan Poe lived a life of many firsts. He is considered to be the inventor of the detective-fiction genre. He was also the first notable American author to make his living through his writing, something that didn’t really go too well for him as he was always financially strapped. In 1849 he was found on the streets of Baltimore, delirious from either drugs or alcohol. He died a few days later in hospital at 39 years of age.

70. “Laughing” creature : HYENA
Our word “volcano” comes from “Vulcano”, the name of a volcanic island off the coast of Italy. The island’s name comes from Vulcan, the Roman god of fire. The Romans believed that the island of Vulcano was the chimney of the forge belonging to the god Vulcan. The Romans also believed that the eruptions on Mount Etna in Sicily were caused by Vulcan getting angry and working his forge so hard that sparks and smoke flew out of the top of the volcano.

Down
2. Double-reeded instrument : OBOE
The oboe is perhaps my favorite of the reed instruments. The name “oboe” comes from the French “hautbois” which means “high wood”. When you hear an orchestra tuning before a performance you’ll note (pun intended!) that the oboe starts off the process by playing an “A”. The rest of the musicians in turn tune to that oboe’s “A”. Oh, and if you want to read a fun book (almost an “exposé”) about life playing the oboe, you might try “Mozart in the Jungle” by oboist Blair Tindall. I heard recently that the folks at HBO are working towards a pilot based on the book, and I can’t wait to see it!

4. A little faster than largo : ADAGIO
An adagio is a piece of music with a slow tempo. The “adagio” marking on the score is an instruction to play the piece slowly and in a stately manner. The word adagio is Latin for “at ease”.

Largo is a instruction to play a piece of music with a very slow tempo. “Largo” is the Italian word for “broadly”.

9. Dual-track, in a way : STEREO
Monophonic sound (“mono”) is sound reproduced using just one audio channel, which is usually played out of just one speaker. Stereophonic sound is reproduced using two audio channels, with the sound from each channel played out of two different speakers. The pair of stereo speakers are usually positioned apart from each other so that sound appears to come from between the two. Quadraphonic sound (4.0 surround sound) uses four audio channels with the sound played back through four speakers often positioned at the corners of the room in which one is listening.

11. ___ acid (protein builder) : AMINO
Amino acids are essential to life in many ways, not least of which is their use as the building blocks of proteins.

22. Some medals for Spanish athletes : OROS
In Spanish, one might win golds (oros) at the Olympic Games (los Juegos Olímpicos).

24. The Titanic, e.g. : SHIP
The RMS Titanic set off on her tragic maiden voyage in 1912, sailing from Southampton, England bound for New York City. Regulations only required that the ship have lifeboat capacity for 1,178 people, even though a full complement of passengers and crew was 3,547. When the order was given to abandon ship, the captain adhered to the traditional protocol of “women and children first”. As a result, only 20% of male passengers survived the disaster, compared to 75% of the female passengers. Perhaps more telling is that 61% of those in first class survived, and only 25% of those in third class. The crew fared even worse though, with only 24% making it.

Cicero was a very influential senator in Ancient Rome, in part due to his renowned ability to deliver a persuasive speech.

27. Original “Star Trek” helmsman : SULU
Mr. Sulu was of course played by George Takei in the original “Star Trek” series. Takei has played lots of roles over the years and is still very active in television. Did you know that he appeared in the 1963 film, “Pt-109”? Not only did Takei play the helmsman on the Starship Enterprise, he played the helmsman steering the Japanese destroyer that ran down John F. Kennedy’s motor torpedo boat.

36. New Zealander : KIWI
Unlike many nicknames for people of a particular country, the name “Kiwi” for a New Zealander isn’t offensive at all. The term comes from the flightless bird the kiwi, that is endemic to New Zealand and is the country’s national symbol. Kiwi is a Maori word, and the plural (when referring to the bird) is simply “kiwi”. However, when you have two or more New Zealanders with you, they are Kiwis (note the “s”, and indeed the capital “K”!).

44. TV’s “How ___ Your Mother” : I MET
“How I Met Your Mother” is a sitcom that CBS has been airing since 2005. The main character is Ted Mosby, played by Josh Radnor. Mosby is also the narrator for the show, looking back from the year 2030 (the live action is set in the present). As narrator, the older Mosby character is voiced by Bob Saget.

46. Wombs : UTERI
The Latin “uterus” translates as both “womb” and “belly”. The Latin word was derived from the Greek “hystera” also meaning womb, which gives us the words “hysterectomy”, and “hysterical”.

51. Summation symbol in math : SIGMA
Sigma is the eighteenth letter of the Greek alphabet, and is the one used for an “ess” sound.

Sylvia Plath was a poet from Boston, Massachusetts who lived much of her life in the UK, where she married fellow poet Ted Hughes. The couple had a tumultuous relationship, and Plath had a long battle with depression. She lost that battle in 1963, committing suicide at the age of 30 years.

58. Presenter of many game shows? : ESPN
ESPN is the Entertainment Sports Programming Network, a cable network that broadcasts sports programming 24 hours a day. It was launched back in 1979.

60. Jets or Nets : TEAM
Just like the New York Giants, the New York Jets are based in New Jersey, headquartered in Florham Park. The Jets and the Giants have a unique arrangement in the NFL in that the two teams share the same stadium, the New Meadowlands in East Rutherford, New Jersey. The Jets were an AFL charter team, formed in 1959 as the Titans of New York. They changed their name to the Jets in 1963.

The New Jersey Nets NBA team play in the Prudential Center in Newark, New Jersey. The plan is for them to relocate to the Barclays Center that is under construction in Brooklyn, New York. The team’s name will then change to the Brooklyn Nets.

65. Govt. insurer of seniors : SSA
The Social Security Administration (SSA) was of course set up as part of President Franklin D. Roosevelt’s New Deal. The first person to receive a monthly retirement benefit was Ida May Fuller of Vermont who received her first check for the sum of $22.54 after having contributed for three years through payroll taxes. The New Deal turned out to be a good deal for Ms. Fuller, as she lived to the age of 100 years of age and received a total benefit of almost $23,000, whereas her three years of contributions added up to just $24.75.