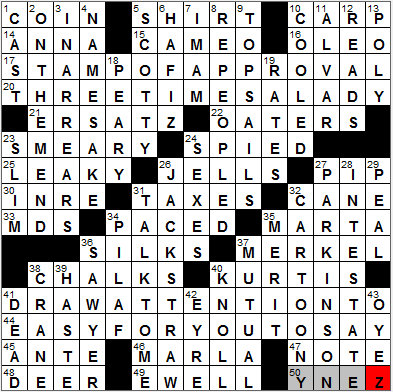 
Today’s Wiki-est, Amazonian Googlies
10. Keep the complaints coming : CARP
The word “carp” used to mean simply “talk” back in the 13th century, with its roots in the Old Norwegian “karpa” meaning “to brag”. A century later the Latin word “carpere” meaning “to slander” influenced the use of “carp” so that it came to mean “find fault with”.

14. Pavlova of the ballet : ANNA
Anna Pavlova was a Russian ballerina who performed in the late 1800s and early 1900s. Pavlova became so successful that she was the first ballerina to pull together her own company and tour the world. Her most famous role was “The Dying Swan” that she danced to the beautiful “Le cygne” from Saint-Saëns’ “Carnival of the Animals”. Pavolva eventually left Russia for good, and settled in England.

15. Head stone? : CAMEO
Cameo is a method of carving, often the carving of a gemstone or a piece of jewelry. The resulting image is in relief (sits proud of the background), whereas an engraved image would be produced by the similar (but “opposite”) carving method known as intaglio. Nowadays, the term cameo is used for any piece of oval-shaped jewelry that contains the image of a head, usually in profile (maybe even a photograph).

16. Nondairy alternative : OLEO
Emperor Louis Napoleon III of France announced a competition to develop a substitute for butter, a substitute that would be more accessible to the lower classes and more practical for the armed forces. In 1869, a French chemist called Hippolyte Mege-Mouries came up with something he called oleomargarine, which was eventually manufactured under the trade name “margarine”. The name “oleomargarine” also gives us our generic term “oleo”.

20. First #1 hit for the Commodores : THREE TIMES A LADY
The Commodores were very big in the seventies and eighties. The group’s original members first got together as freshman while attending what is now Tuskegee University, and got their big break opening for the Jackson 5 on tour. The Commodores most famous member was Lionel Richie.

21. Counterfeit : ERSATZ
Something described as “ersatz” is a copy, and usually not a good one. “Ersatz” comes from the German verb “ersetzen” meaning “to replace”.

22. Horse shows? : OATERS
The term “oater”, used for a western movie, comes from the number of horses seen, and horses love oats!

31. One of Franklin’s certainties : TAXES
In a letter to Jean-Baptiste Leroy dated 13 Nov 1789, Benjamin Franklin wrote “Our new Constitution is now established, and has an appearance that promises permanency; but in this world nothing can be said to be certain, except death and taxes.”

32. Little Tramp prop : CANE
Charlie Chaplin earned the nickname “The Tramp” from the much-loved character that he frequently played on the screen. Chaplin was much-respected as a performer. The great George Bernard Shaw referred to him as “the only genius to come out of the movie industry”.

46. The Donald’s second ex : MARLA
Marla Maples was the second wife of Donald Trump. Maples and Trump dated secretly for a couple of years while the Donald was still married to his first wife, Ivana. When Ivana discovered the affair, she filed for divorce, and eventually Donald and Marla married. It was Trump’s turn to file for divorce several years later after the National Enquirer outed Marla for having an affair with a Florida bodyguard.

Harper Lee’s Pulitzer Prize-winning novel “To Kill A Mockingbird” was first published in 1960. The book is a mainstay in English classes all around the world and is a great ambassador for American literature, I’d say.

Down
5. Warp drive repairman on the original “Star Trek” : SCOTTY
In the “Star Trek” series on television and in the movies, the colorful character of “Scotty” was played by the Canadian actor James Doohan. Doohan joined the Royal Canadian Artillery at the start of WWII, and participated in the D-Day Invasion of Normandy. After surviving the landing, that same day Doohan was shot by one of his own men in a tragic mishap. Doohan was hit six times, with a bullet to his chest stopped by a silver cigarette case he was carrying. One of Doohan’s fingers was shot off in the incident, an injury that he successfully concealed during his acting career.

6. Koran memorizer : HAFIZ
“Hafiz” is an Arabic word meaning “guardian” and “retentive”. The term is used for someone who has completely memorized the Qur’an.

7. Koran reciter : IMAM
An imam is a Muslim leader, often the one in charge of a mosque or perhaps a Muslim community.

9. Schooner features : TOPSAILS
A topsail is a sail that is set on a mast above another sail. It is possible to mount yet another topsail above the first.

11. Finnish architect Aalto : ALVAR
Alvar Aalto was a Finnish architect and designer. He did most of his work in the first half of the twentieth century, and earned himself the nickname of “Father of Modernism” in Finland and the rest of the Nordic countries.

18. “The North Pole” author, 1910 : PEARY
The famous American explorer Robert Peary, was supposedly the first man to reach the geographic North Pole, although that claim has been disputed even back in 1909 right after Peary returned from his trek across the polar ice. At issue is the accuracy of his navigation.

27. English physician James who gave his name to a disease : PARKINSON
English apothecary surgeon James Parkinson wrote “An Essay on the Shaking Palsy” in 1817. This work was the first to describe the disorder that was later to be called Parkinson’s disease in his honor.

28. Not ready to go, you might say : INTESTATE
Someone who dies “intestate” does so without having made a will.

32. Not drawn true to life : CARTOONY
The word “cartoon” was originally used for a “drawing on strong paper”, a durable drawing used as a model for another work. The term comes from the French word “carton” meaning “heavy paper, pasteboard”. Cartoons have been around a long time, with some of the most famous having being drawn by Leonardo da Vinci.

34. Starchy dish : PILAF
Pilaf is a Persian word, and we use it to describe rice that is browned in oil and then cooked in a seasoned broth.

42. Literary governess’s surname : EYRE
“Jane Eyre” is of course the novel written by Charlotte Brontë, under the pen name Currer Bell. Over the years, I’ve shared here on the blog that the “Jane Eyre” storyline is a little too dark and Gothic for my taste, but a very persuasive blog reader convinced me to look more at the romantic side of the story and give it a second chance. I watched a wonderful 4-hour television adaptation of the novel made by the BBC a while back, and I have to say that because I was focused on the relationship between Jane and Rochester, I was able to push past the Gothic influences (that depress me) so I really enjoyed the story. I thoroughly recommend this 2006 BBC adaptation to fans of the novel.