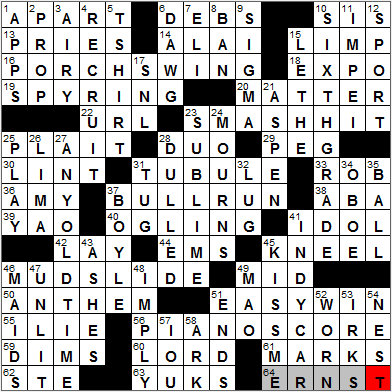 CROSSWORD SETTER: Lynn Lempel
THEME: Baseball … each of the theme answers is a two-word term, with the last word telling someone at bat what needs to be done to score:

16. Relaxing spot on a veranda : PORCH SWING
Our word “veranda” comes from India, and is a variant of the Hindi word “varanda” used for a long balcony or terrace.

29. Cribbage marker : PEG
Cribbage is one of my favorite card games. Cribbage always had a certain mystique to me as I was growing up as I’d see old men playing it in local pubs, sitting with cards and the fascinating cribbage board with its pegs as score markers. Apparently cribbage was invented in the early 1600s by an English poet called John Suckling, who based it on the long-gone game called Noddy. Cribbage is often referred to simply as “crib”, and the name “cribbage” probably comes from this term. The “crib” is a set of cards that features in the game.

36. Late singer Winehouse : AMY
Amy Winehouse was a much ridiculed singer from the UK, whose life was fraught with very public bouts of drug and alcohol abuse. Winehouse’s lifestyle caught up with her in 2011 when she was found dead from alcohol poisoning. The unfortunate singer was only 27 years old when she died, which means she is now viewed as a member of the “27 Club”. This “club” is made up of famous musicians who all died at the age of 27, including Brian Jones of the Rolling Stones, Jimi Hendrix, Janis Joplin, Jim Morrison of the Doors, and Kurt Cobain of Nirvana.

37. Virginia site of two Civil War battles : BULL RUN
Manassas, Virginia was the site of two major battles during the Civil War, the First and Second Battles of Bull Run (also known as the Battles of Manassas). In the first battle, one of the southern brigades was led by Brigadier General Thomas Jackson. His brigade was well-trained and disciplined, so much so that as the Union troops made advances, a fellow-general encouraged his retreating men to hold their positions yelling “There is Jackson standing like a stone wall. Let us determine to die here, and we will conquer”. There are reports that the actual quote was less complimentary, but regardless, from that day on Jackson was known as “Stonewall”.

38. Attorneys’ org. : ABA
The American Bar Association (ABA) was founded back in 1878 and is a voluntary association for lawyers and law students. The ABA focuses on setting academic standards for law schools and setting ethical codes for the profession.

55. Tennis’s Nastase : ILIE
I thought that Ilie Nastase was the most entertaining tennis player of the 70s, the days of Jimmy Connors, Bjorn Borg and John McEnroe. No matter how much pressure there was in a match, he always had time to give the crowd a laugh.

56. Sheet music for Van Cliburn, say : PIANO SCORE
Van Cliburn is a classical pianist from Shreveport, Louisiana. Cliburn became famous in the late fifties when he won the prestigious International Piano Competition held in Moscow. This win was of particular interest to the public, as an American winning something in the USSR was big news in the days of the Cold War.

60. Title for Byron or Baltimore : LORD
George Gordon Byron, known simply as “Lord Byron”, was an English poet active in the early 1800s. He was equally as famous for his poetry as he was for the wild excesses in his personal life. Byron lived much of that life outside of England, and fought for revolutionaries in both Italy and Greece. He died from a fever contracted while fighting for the Greeks against the Ottomans.

Cecilius Calvert was the 2nd Baron of Baltimore, an English peer and member of the Irish House of Lords who became Proprietary Governor of the Province of Maryland. Calvert managed the Maryland colony from his home in England, for 42 years. As Calvert was a Roman Catholic, the colony of Maryland became a haven for Catholics from England who were suffering religious persecution. The city of Baltimore is named after Calvert, who was also known as Lord Baltimore. The Baltimore title comes from the Manor of Baltimore, a large estate in County Longford in Ireland.

62. Sault ___ Marie : STE
In the summer of 2010 I spent a very interesting afternoon watching ships make their way through the Soo Locks and Soo Canal between Lake Superior and the lower Great lakes. The name “Soo” comes from the US and Canadian cities on either side of the locks, both called Sault Ste. Marie.

64. German Surrealist Max : ERNST
Max Ernst was born near Cologne in Germany in 1891. Ernst had to fight in WWI, as did most young men. In his autobiography he writes, “Max Ernst died the 1st of August, 1914” a statement about his experiences in the war. Actually, he lived to the ripe old age in 85, and died in 1976.

Down
1. Downloads for tablets : APPS
Apple’s iPad is a tablet computer, meaning that the whole computer is contained in a flat touchscreen device, with input being made by using one’s fingers on the screen or by using a stylus. It looks very cool, but it’s still a bit too pricey for me for what you get …

6. Deputy ___ (toon) : DAWG
Deputy Dawg is a cartoon character in the Terrytoon television series. Deputy Dawg is a deputy sheriff in the State of Mississippi. I remember him well as my parents put curtains on the windows in our bedroom when we were very young, which featured the characters Deputy Dawg and Yogi Bear.

7. Manning who has won multiple Super Bowl M.V.P. awards : ELI
Even I know that Eli Manning and his older brother Peyton are both quarterbacks!

9. Greek “S” : SIGMA
Sigma is the eighteenth letter of the Greek alphabet, and is the one used for an “ess” sound.

11. Architect for the Louvre pyramid : I M PEI
I. M. Pei (full name: Ieoh Ming Pei) is an exceptional American architect, born in China. Of his many wonderful works, my favorite is the renovation of the Louvre in Paris, especially the Glass Pyramid in the courtyard.

15. River through Hades : LETHE
The Lethe is one of the five rivers of Hades in Greek mythology. All those who drank from the river Lethe experienced complete forgetfulness. The Greek word “lethe” means “oblivion, forgetfulness”.

17. Irreverent weekend show, briefly : SNL
NBC first aired a form of “Saturday Night Live” (SNL) in 1975 under the title “NBC’s Saturday Night”. The show was actually created to give Johnny Carson some time off from “The Tonight Show”. Back then “The Tonight Show” had a weekend episode, and Carson convinced NBC to pull the Saturday or Sunday recordings off the air and hold them for subsequent weeknights in which Carson needed a break. NBC turned to Lorne Michaels and asked him to put together a variety show to fill the vacant slot, and he came up with what we now call “Saturday Night Live”.

21. Colorado ski town : ASPEN
Aspen, Colorado used to be known as Ute City, with the name change taking place in 1880. Like many communities in the area, Aspen was a mining town, and in 1891 and 1892 it was at the center of the highest production of silver in the US. Nowadays of course, it’s all about skiing and movie stars.

25. With 35-Down, much-anticipated cry every April : PLAY
(35. See 25-Down : BALL)
Baseball season starts every year at the beginning of April.

26. Peru’s capital : LIMA
Lima is the capital city of Peru. Lima was founded in 1535 by the Spanish conquistador Francisco Pizarro, who named it “la Ciudad de los Reyes” (the City of Kings). He chose this name because the decision to found the city was made on January 6th, the feast of the Epiphany that commemorates the visit of the three kings to Jesus in Bethlehem.

32. Schlep : LUG
Our word “schlep” means “to carry, drag”. As one might expect, “schlep” comes from Yiddish, with “shlepen” having the same meaning.

34. Bassoon relative : OBOE
The oboe is perhaps my favorite of the reed instruments. The name “oboe” comes from the French “hautbois” which means “high wood”. When you hear an orchestra tuning before a performance you’ll note (pun intended!) that the oboe starts off the process by playing an “A”. The rest of the musicians in turn tune to that oboe’s “A”. Oh, and if you want to read a fun book (almost an “exposé”) about life playing the oboe, you might try “Mozart in the Jungle” by oboist Blair Tindall. I heard recently that HBO are working towards a pilot based on the book and I can’t wait to see it!

37. 2009 British singing sensation Susan : BOYLE
Susan Boyle hit the big time when she first appeared on the television show “Britain’s Got Talent”. She came on the stage with a very unassuming manner, not looking at all glamorous and then belted out a song with her powerful and mature voice. She blew away the audience and judges, and within nine days of her debut performance, a clip of her audition had been watched 100 million times on the Internet!

41. Big series name in auto racing : INDYCAR
IndyCar is a sanctioning body in the world of auto racing.

45. Instruction to Kate in a Cole Porter musical : KISS ME
“Kiss Me, Kate” is a musical written by Cole Porter first produced on Broadway in 1948. Cole Porter had a string of successes in the twenties and thirties including “Gay Divorce” and “Anything Goes”, but he found his career in decline in the forties. “Kiss Me, Kate” proved to be a dramatic come back, and was the only one of his shows that ran for more than 1,000 performances on Broadway.

49. China’s Long March leader : MAO
Mao Zedong was born on December 16, 1893 in the Hunan Province of China. As he was the son of a peasant farmer, his prospects for education were limited. Indeed he left school at age 13 to work on the family farm but did eventually get to secondary school in Changsa, the provincial capital. In the years following he continued his education in Beijing, and actually turned down an opportunity to study in France.

In the 1930s, the rebel People’s Liberation Army (PLA) of China was locked in battle with the army of the Chinese Nationalist Party led by Chiang Kai-shek. In the jaws of defeat, the PLA (or Red Army as it was known) managed to make a series of withdrawals from the southern part of the country, evading capture by retreating to the north. This campaign of retreat involved the Red Army traversing about 8,000 miles of difficult terrain in a move that took over a year. The Communist troops of the Red Army were led by Mao Zedong and Zhou Enlai. The retreat came to be termed “the Long March”, and its relative success established the reputations of Mao Zedong and Zhou Enlai within the Communist Party, ultimately leading to their takeover of power after the subsequent Chinese Civil War.

58. State north of La. : ARK
The states of Arkansas and Kansas are both named after the Kansa tribe of Native Americans that was closely associated with the Sioux tribes of the Great Plains.