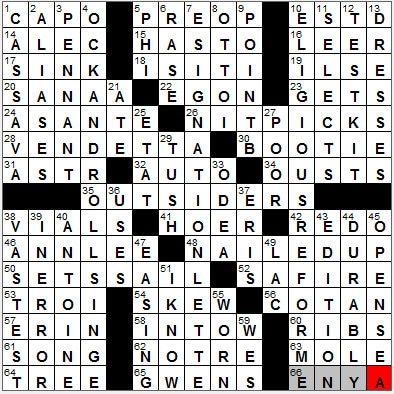 CROSSWORD SETTER: Sean Dobbin
THEME: OUTSIDE Rs … all of the theme answers are missing an R at the beginning and an R at the end:


Today’s Wiki-est, Amazonian Googlies
1. It can change one’s tune : CAPO
A capo is a clamp-like device that is placed around the neck of a guitar to shorten the strings, and hence raise the pitch. The full name, rarely used these days, is “capo tasto”, which is Italian for “head tie”.

10. Abbr. on many a cornerstone : ESTD
Established (Estd.)

“GoldenEye” is the 1995 James Bond movie, the one that introduced us to Pierce Brosnan in the lead role. The title of the film comes not from one of Ian Fleming’s books (as is the norm), but rather from the name Fleming gave to his estate (Goldeneye) in Jamaica where he lived for much of his life.

18. Question asked in Matthew 26:22 : IS IT I
When Jesus announced at the Last Supper that someone at the table would betray him, according to Matthew 26:22 …

And they were very sorrowful and began to say to him one after another, “Is it I, Lord?”

“On Her Majesty’s Secret Service” was the sixth of the James Bond films, and the only one to star George Lazenby in the leading role. He wasn’t a great choice for 007 …

20. World capital at 7,200+ feet elevation : SANA’A
Sana (also Sana’a) is the capital city of Yemen. Within the bounds of today’s metropolis is the old fortified city of Sana where people have lived for over 2,500 years. The Old City is now a World Heritage Site.

23. Groks : GETS
“To grok” is to understand, a slang word really only used in “techie” circles. “Grok” is the creation of science fiction author Robert Heinlein, who coined the term in his 1961 novel “Stranger in a Strange Land”.

26. Carps : NITPICKS
The word “carp” used to mean simply “talk” back in the 13th century, with its roots in the Old Norwegian “karpa” meaning “to brag”. A century later the Latin word “carpere” meaning “to slander” influenced the use of “carp” so that it came to mean “find fault with”.

32. “Das ___” (Volkswagen slogan) : AUTO
VW stands for Volkswagen, which translates from German into “people’s car”. The original “Volkswagen” was built under a directive from Adolf Hitler, who wanted a cheap car built that ordinary people could afford to purchase. He awarded the contract to engineer Ferdinand Porsche, whose name (paradoxically) would forever be associated with high-performance expensive cars.

46. Old Shaker leader : ANN LEE
Mother Ann Lee was the leader of the Shakers, the familiar name for the United Society of Believers in Christ’s Second Appearing. Lee was born and raised in Manchester, England. It was there that she became prominent as a speaker declaring faith in the second coming of Christ. She took a band of her followers to America in 1774 and eventually settled just outside Albany, New York.

52. He once wrote “Last but not least, avoid clichés like the plague” : SAFIRE
William Safire was a syndicated columnist for the New York Times. He also worked for the Nixon election campaigns in 1960 and 1968, and was a speechwriter for both Richard Nixon and Spiro Agnew.

53. “Star Trek: T.N.G.” role : TROI
Deanna Troi, the character on “Star Trek: The Next Generation”, is played by the lovely Marina Sirtis. Sirtis is a naturalized American citizen and has what I would call a soft American accent on the show. However, she was born in the East End of London and has a natural accent off-stage that is more like that of a true Cockney.

When Gene Roddenberry first proposed the science fiction series that became “Star Trek”, he marketed it as “Wagon Train to the Stars”, a pioneer-style Western in outer space. In fact his idea was to produce something more like “Gulliver’s Travels”, as he intended to write episodes that were adventure stories on one level, but morality tales on another. Personally I think that he best achieved this model with the spin off series “Star Trek: The Next Generation”. If you watch individual episodes, you will see thinly disguised treatments of moral issues such as racism, homosexuality, genocide etc. For my money, “The Next Generation” is the best of the whole franchise …

56. Trig function : COTAN
The cotangent is the ratio of the adjacent to the opposite in a right-angled triangle. It is the inverse of the other well-known ratio, the tangent.

57. Blarney source : ERIN
“Éire”, is the Irish word for “Ireland”. Erin is an anglicized version of “Éire”, actually corresponding to “Éirinn”, the dative case of “Éire”.

Blarney is a town in County Cork in the south of Ireland. Blarney is home to Blarney Castle, and inside the castle is the legendary Blarney Stone. “Kissing the Blarney Stone” is a ritual engaged in by oh so many tourists (indeed, I’ve done it myself!), but it’s not a simple process. The stone is embedded in the wall of the castle, and in order to kiss it you have to sit on the edge of the parapet and lean way backwards so that your head is some two feet below your body. There is a staff member there to help you and make sure you don’t fall. The Blarney Stone has been labelled as the world’s most unhygienic tourist attraction! But once you’ve kissed it, supposedly you are endowed with the “gift of the gab”, the ability to talk eloquently and perhaps deceptively, but without offending. Sure, I wouldn’t know …

61. It may be broken into on Broadway : SONG
Broadway really is, and always has been, the Main Street of New York City. It started out as the Wickquasgeck Trail that was trampled into the Manhattan brush land by the Native Americans of the area. In the days of the Dutch, the trail became the man road though the island of Manhattan, down to the New Amsterdam settlement in the south. The Dutch described it as a “Breede weg”, a broad street or broad way. The name Broadway was adopted as the official name for the whole thoroughfare in 1899 … on Valentine’s Day.

65. Music’s Stefani and others : GWENS
Gwen Stefani is the lead singer for the rock band No Doubt. She joined the band in 1986, focused on a solo career from 2004-2008, but is now back singing and working with No Doubt.

66. Recording artist made famous by the BBC series “The Celts” : ENYA
Enya’s real name is Eithne Patricia Ní Bhraonáin, which can translate from the Irish into Enya Brennan. Her Donegal family (in the northwest of Ireland) formed a band called Clannad, which included Enya. In 1980 Enya launched her very successful solo career. And she sure does turn up a lot in crosswords!

Down
1. Tapioca source : CASSAVA
The cassava plant is a woody shrub native to South America grown largely for its carbohydrate-rich tubers. In fact, the cassava is the third largest food source of carbohydrates (for humans) in the world. Ordinarily, the carbohydrate is extracted from the plant, dried as flour and is called tapioca.

2. Ellery Queen and others : ALIASES
The Ellery Queen series of detective novels was somewhat unique in that Ellery Queen was the hero of the tales, and was also the pen name of the author. Actually, the “author” was a pair of writers; two cousins from Brooklyn, New York.

4. Checker or Domino : R-OCK AND ROLL SINGE-R
Ernest Evans was given the nickname “Chubby” by his boss at a produce market where he worked after school. When he went to make a recording for “American Bandstand” as Ernest Evans, Dick Clark’s wife asked what his friends called him. When she heard “Chubby”, she compared his name to that of “Fats” Domino. She then joked that “Checker” might be a better choice than Evans, given that Fats used “Domino”. And so, Chubby Checker was born.

5. Fraternity character : PHI
Phi is the 21st letter of the Greek alphabet.

6. Destroy, in Devon : RASE
Devon is a county in the southwest of England. The county town of Devon is Exeter, and the largest city in the county is Plymouth, the port from which the Mayflower Pilgrims departed.

8. 10th-century Holy Roman emperor : OTTO I
Otto I the Great, ruled the Holy Roman Empire in the 10th century.

10. John Calvin, e.g. : R-ELIGIOUS REFORME-R
John Calvin was a French theologian who was especially active during the Protestant Reformation. His system of theology took hold, and later became known as Calvinism.

29. Bottom : TUSH
“Tush”, a word for the backside, is an abbreviation of “tochus” that comes from the Yiddish “tokhes”.

33. Ancient concert halls : ODEA
In Ancient Greece an odeon was like a small theater, with “odeon” literally meaning a “building for musical competition”. Odea were used in both Greece and Rome, for entertainments such as musical shows and poetry readings.

37. Dwarf planet beyond Pluto : ERIS
Pluto was discovered in 1930, and was welcomed as the ninth planet in our solar system. It is relatively small in size, just one fifth of the mass of our own moon. In the seventies, astronomers began to discover more large objects in the solar system, including Eris, a “scattered disc object” at the outer reaches. Given that Eris is actually bigger than Pluto, and other objects really aren’t that much smaller, Pluto’s status as a planet was drawn into question. In 2006 there was a scientific definition for a “planet” agreed for the first time, resulting in Pluto being relegated to the status of dwarf planet, along with Eris.

40. Fats Domino’s real first name : ANTOINE
Antoine “Fats” Domino was born and raised in New Orleans, with Creole as his first language. He made into the big time in 1949 when he recorded an early rock and roll record called “The Fat Man”. That record sold over a million copies, the first rock and roll record to achieve that milestone.

59. Montgomery of jazz : WES
Wes Montgomery was a jazz guitarist from Indianapolis.