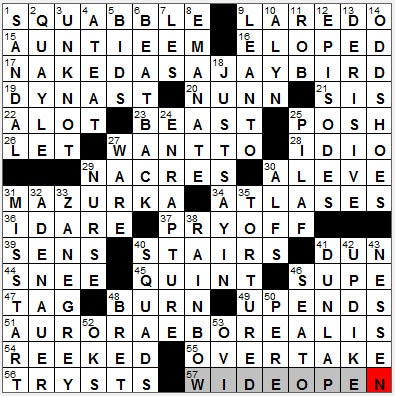 
Today’s Wiki-est, Amazonian Googlies
1. Pettifog : SQUABBLE
A “pettifogger” is someone who quibbles, particularly a lawyer. “Pettifogger” evolved from “petty”.

9. Home of Texas A&M International University : LAREDO
Laredo is a border city in Texas, situated on the banks of the Rio Grande across the border from Nuevo Laredo in Mexico.

Texas A&M is the seventh largest university in the country, and was the first public higher education institute in the state when it accepted its first students in 1876. The full name of the school was the Agricultural and Mechanical College of Texas, and its primary mission used to be the education of males in the techniques of farming and military warfare. That’s quite a combination! Because of the agricultural connection, the college’s sports teams use the moniker “Aggies”.

15. Reprimander of Miss Gulch : AUNTIE EM
In “The Wonderful Wizard of Oz”, Dorothy lives with her Aunt Em and Uncle Henry.

19. One in a powerful house : DYNAST
A “dynast” is someone who rules by virtue of heredity.

25. Like many suites : POSH
No one really knows the etymology of the word “posh”. The popular myth that POSH stands for “Port Out, Starboard Home” is completely untrue, a story that can be traced back to the 1968 movie “Chitty Chitty Bang Bang”. The myth is that wealthy British passengers travelling to and from India would book cabins on the port side for the outward journey and the starboard side for the home journey. This trick was supposedly designed to keep their cabins out of the direct sunlight.

29. Nautilus shell liners : NACRES
Nacre is another name for mother-of-pearl. Nacre is the strong iridescent material laid down by some mollusks on the inside of their shells, and it’s also what makes up pearls. The creature lays down nacre as a defensive mechanism, protecting the soft tissue of its body from the rough surface of the outer shell. Similarly, it uses nacre to encapsulate harmful debris or a parasite that penetrates the shell, and that’s how a pearl is formed.

The marine creature called a nautilus is referred to as a “living fossil”, as it looks just like the spiral-shelled creatures that are commonly found in fossils. The spiral shape is a great example of the Fibonacci series defining a natural phenomenon, as the spiral is a Fibonacci spiral, described by the famous series of numbers.

30. “All Day Strong. All Day Long” sloganeer : ALEVE
Aleve is a brand name for the anti-inflammatory drug Naproxen sodium.

31. Pole dance? : MAZURKA
A mazurka is a Polish folk dance. The great French-Polish composer Frédéric Chopin was known for writing many mazurkas for solo piano.

34. Their scales aid in location : ATLASES
We call a book of maps an “atlas” after a collection of maps published by the famous Flemish geographer Gerhadus Mercator. His collection contained a frontispiece with an image of Atlas the Titan from Greek mythology holding up the world on his shoulders.

44. Olden dagger : SNEE
“Snick or snee” is the name given to cut and thrust while fighting with a knife. The phrase is rooted in a pair of Dutch words, and it gave its name to a “snee”, a light sword-like knife.

47. Finishing touch on a diamond? : TAG
One might be tagged out on a baseball diamond.

51. Events marked by large streamers : AURORAE BOREALIS
The spectacular aurora phenomenon is seen lighting up the night sky at both poles of the earth (the Aurora Borealis in the north, and the Aurora Australis in the south). The eerie effect is caused by charged particles colliding with atoms at high latitudes.

56. Meetings kept under wraps : TRYSTS
In its most general sense, a tryst is a meeting at an agreed time and place. More usually it is associated with a prearranged meeting between lovers. The term comes from the Old French “triste”, a waiting place designated when hunting.

Down
2. Deliverer of the 1992 “Murphy Brown speech” : QUAYLE
Dan Quayle served as both a US Representative and a US Senator from Indiana before becoming the 44th Vice President, under President George H. W. Bush. Quayle refused to run for office in 1996, going up against the Clinton/Gore ticket, but entered the fray again in 2000 seeking the Republican nomination for president. Ironically, he was defeated by the son of his former Commander-in-Chief, George W. Bush.

Dan Quayle addressed the Commonwealth Club of California in 1992, with a speech blaming decaying family values for the Los Angeles riots that were raging at the time. He cited the television program “Murphy Brown” as an example of a contributor to degenerating moral standards, highlighting the fact that the lead character chose to bear a child as a single mother. Such was the outcry amongst many of the public that the address is remembered as the “Murphy Brown Speech”.

7. Brown with the Band of Renown : LES
Les Brown and His Band of Renown are a big band that started to perform in the late thirties and are still going strong today. Les Brown led the band from the start, and worked with the likes of Doris Day, Bob Hope and Tony Bennett. Brown passed away in 2001, and the band is now led by his son, Les Brown, Jr.

10. Kirk who played the first big-screen Superman : ALYN
Kirk Alyn was the actor who played the title role in the first ever “Superman” movie, way back in 1948. Alyn reprised the role in a 1950 sequel called “Atom Man V. Superman”.

13. Like raspberries : DERISIVE
Not so much here in America, but over in the British Isles “blowing a raspberry” is a way of insulting someone (I think it’s called “a Bronx cheer” here in the US).

25. Bed for some kebabs : PILAF
Pilaf is a Persian word, and we use it to describe rice that is browned in oil and then cooked in a seasoned broth.

The name “kebab” covers a wide variety of meat dishes that originated in Persia. In the West, we usually use “kebab” when talking about shish kebab, which is meat (often lamb) served on a skewer.

30. Film composer Clausen and others : ALFS
Alf Clausen is a film and television composer. Most famously, Clausen composes all the music for “The Simpsons”. He also composed for a favorite movie of mine, “Ferris Bueller’s Day Off”.

32. Erhard succeeded him in 1963 : ADENAUER
Konrad Adenauer was the first Chancellor of West Germany after WWII, taking office in 1949 at the age of 73. He was 87 years old when he left office. Understandably perhaps, his nickname was “Der Alte”, German for “the old man”. He spent much of WWII in prison, courtesy of Herr Hitler.

33. “The Vanishing American” novelist, 1925 : ZANE GREY
Zane Grey sure did hit on the right niche. Grey wrote romanticized western novels and stories that really lent themselves to the big screen in the days when westerns were very popular movies. Incredibly, 110 films were made based on his works.

41. “André” playwright William : DUNLAP
William Dunlap was an American playwright, producer and actor. His play “André” was first produced in New York City in 1798. “André” was significant in that it was the first American tragedy written about an American subject. The play explores the role of Major John André in the treason of Benedict Arnold, and André’s subsequent hanging.

42. 1982 and 1991 Pulitzer winner for fiction : UPDIKE
The novelist John Updike’s most famous work is the Harry “Rabbit” Angstrom series of books. Updike is one of only three authors who has won more than one Pulitzer Prize for Fiction, and he did so for two of his “Rabbit” books.

The 1960 novel by John Updike called “Rabbit Run” tells the story of Harry “Rabbit” Angstrom as he tries to escape from his constraining, middle-class life. “Rabbit Run” is the first in a series of novels from Updike that feature the “Rabbit” character, the others being:

46. Defense grp. formed in 1954 : SEATO
The Southeast Asia Treaty Organization (SEATO) was set up in 1954, a defense organization with the mission to block communist influence growing in Southeast Asia. The driving force behind the organization’s creation was President Eisenhower’s Secretary of State, John Dulles. The list of SEATO members included Australia, France, the Philippines, the UK and the US. The organization was never really considered effective, and it fell apart in 1977 largely due to a lack of interest.

53. Duct lead-in : OVI-
Oviducts are the non-mammalian equivalents of the Fallopian tubes. Eggs travel from the ovaries, along the oviduct (there are usually two oviducts, but sometimes only one) and are released into some other organ or anatomical structure depending on species.