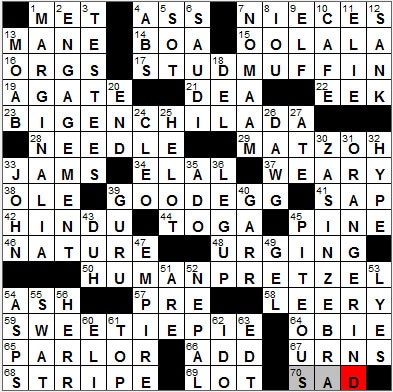 CROSSWORD SETTER: Lynn Lempel
THEME: Food for People … each of the theme answers describes a type of person, using a food item as the second of two words:


Today’s Wiki-est, Amazonian Googlies
1. Yankee’s crosstown rival : MET
The New York Mets baseball team was founded in 1962, a replacement for two teams that the city had lost, namely the Brooklyn Dodgers and the New York Giants. For several years the Mets played very poorly, finishing no better than second to last in their division. Then of course along came the “Miracle Mets” in 1969, who beat the Baltimore Orioles to claim the World Series in a huge upset.

14. ___ constrictor : BOA
Boa constrictors are members of the Boidae family of snakes, all of which are non-venomous. Interestingly, the female boa is always bigger than the male.

21. Grp. that raids grow houses : DEA
The Drug Enforcement Administration (DEA) was set up in 1973 while President Nixon was in office.

23. Influential sort : BIG ENCHILADA
“Enchilada” is the past participle of the Spanish word “enchilar” meaning “to add chile pepper to”. An enchilda is a basically a corn tortilla rolled around some filling and then covered in chili pepper sauce.

29. Bread eaten during Passover : MATZOH
The Passover Seder is a ritual feast that marks the beginning of the Jewish Passover holiday, celebrating the liberation of the Israelites from slavery in Egypt. One of the traditions at the meal is that the youngest child at the table asks “The Four Questions”, all relating to why this night is different from all other nights in the year:

34. Israeli carrier : EL AL
El Al (Hebrew for “to the skies”) does not fly on the Sabbath, although this has been subject of some controversy at times since the airline’s founding in 1948.

42. Gandhi, e.g., religiously : HINDU
Mohandas Gandhi was a political and spiritual leader in India in the first part of the 20th century, as the country sought independence from Britain. He was also referred to as “Mahatma”, meaning “great soul”. His remarkable philosophy of nonviolence and living a modest lifestyle was a great inspiration to the Indian people. India (and Pakistan) was granted independence in 1947. Sadly, Gandhi was assassinated the very next year, by a Hindu nationalist.

44. “Gladiator” garment : TOGA
In Ancient Rome the classical attire known as a toga (plural “togae”) was usually worn over a tunic. The tunic was made from linen, and the toga itself was a piece of cloth about twenty feet long made from wool. The toga could only be worn by men, and only if those men were Roman citizens. The female equivalent of the toga was called a “stola”.

50. Supple sort : HUMAN PRETZEL
Pretzels originated in Europe and are especially popular in Southern Germany where a pretzel is known as “Brezel”. Pretzels were introduced into the US in the 1800s by immigrants from Germany and Switzerland who came to be known over here as the Pennsylvania Dutch.

64. New York theater award : OBIE
The Obies are the “Off-Broadway Theater Awards”. They are given annually, and the recipients are chosen by “The Village Voice” newspaper.

Down
1. Reader’s notes alongside the text : MARGINALIA
Marginalia are comments and scribbles that are written in the margins of a book.

5. Drunkard : SOT
Our word “sot” comes from the Old English “sott”, meaning a fool. The word “sot” started to be associated with alcohol, and not just foolery, in the late 1500s.

6. Riyadh native : SAUDI
The Kingdom of Saudi Arabia is the largest Arab country in the Middle East and is the world’s largest oil producer, home to world’s largest oil reserves. The Saudi dynasty started in central Arabia in 1744 when the secular leader Muhammad ibn Saud joined forces with the Islamic scholar and Imam, Muhammad ibn Abd-al-Wahhab. At the time, Saud was a ruler of a town near Riyadh and he was determined to bring “true” Islam to the Arabian peninsula. Since 1744 the fortunes of the Saudi family have risen and fallen, but it is that same family who rules what we know today as Saudi Arabia.

Riyadh is the capital of Saudi Arabia, and is located near the center of the country. The name “Riyadh” translates from Arabic as ‘the gardens”.

10. Bistro : CAFE
“Bistro” was originally a Parisian slang term for a “little wine shop or restaurant”.

11. Nobelist Wiesel : ELIE
Elie Wiesel is a holocaust survivor, best known for his book “Night” which tells of his experiences in Auschwitz and Buchenwald.

13. Biblical kingdom east of the Dead Sea : MOAB
In the Bible, Moab was the first son of Lot, and the founder of the Kingdom of Moab.

18. Dover’s state: Abbr. : DEL
The city of Dover is the capital of Delaware, and is the state’s second biggest city (after Wilmington). Dover is named after the town of Dover on the south coast of England, and was given that name by William Penn. The English Dover lies in the county of Kent, and the American Dover resides in Kent County.

24. Royal role for Liz Taylor : CLEO
The 1963 movie “Cleopatra” really is an epic work. It was the highest grossing film of the year, taking in $26 million dollars at the box office, yet it still lost money. The original budget for the film was just $2 million, but so many things went wrong that the final cost swelled to a staggering $44 million dollars, making it the second most expensive movie ever made (taking into account inflation). Elizabeth Taylor was supposed to earn a record sum of $1 million for the film, and ended up earning seven times that amount due to delays. But she paid dearly as she became seriously ill during shooting and had to have an emergency tracheotomy to save her life. The scar in her throat can actually be seen in some of the shots in the film.

25. Serf : HELOT
The helots were a population of poorly treated slaves who served the citizens of Sparta.

26. Cartoondom’s Deputy ___ : DAWG
Deputy Dawg is a cartoon character in the Terrytoon television series. Deputy Dawg is a deputy sheriff in the State of Mississippi. I remember him well as my parents put curtains on the windows in our bedroom when we were very young, which featured the characters Deputy Dawg and Yogi Bear.

30. Spelling clarification that Aziz might use twice : Z AS IN ZEBRA
Aziz is an Arabic male name.

33. Adams, Tyler or Kennedy : JOHN
John Adams was the second President of the United States. I must admit that I learned much of what I know about President Adams in the excellent, excellent HBO series “John Adams”. Having said that, I also visited his home in Quincy, Massachusetts not too long ago. He was clearly a great man, with a great intellect …

John Tyler was the tenth President of the US, and the first to take the office on the death of the incumbent. Tyler’s predecessor was President William Henry Harrison, who was in office only 32 days before he died of natural causes. For a while there was a little confusion about the wording in the constitution that covered such an eventuality. There was an argument made that Tyler would continue as Vice-President but would assume the responsibilities of the office of President, in effect as “Acting President”. However, Tyler proceeded as though he was taking over as President and took the oath of office in his hotel room in Washington. Soon afterwards, Congress declared that Tyler was indeed President, although many continued to dispute the fact. Many of President Tyler’s opponents referred to him as “His Accidency”.

John F. Kennedy was the 35th President of the US, and the fourth US president to have been assassinated in office. The previous three presidents who were killed in office were Abraham Lincoln, James Garfield and William McKinley.

40. Teri of “Tootsie” : GARR
The lovely Teri Garr had a whole host of minor roles in her youth, including appearances in nine Elvis movies. Her big break came with the role of Inga in “Young Frankenstein”, and her supporting role in “Tootsie” earned her an Academy Award nomination. Sadly, Teri Garr suffers from multiple sclerosis and is a National Ambassador for the National Multiple Sclerosis Society.

51. “Diamonds ___ Forever” : ARE
“Diamonds Are Forever” was the fourth of the James Bond novels published by Ian Fleming. The title was used for the seventh of the Bond movies, released in 1971. The movie was remarkable in that Sean Connery was brought back to pay the lead, having given up the role to George Lazenby in “On Her Majesty’s Secret Service”.

52. Country with Mount Everest on its border : NEPAL
Nepal lies to the northeast of India, and today is known as the Federal Democratic Republic of Nepal. In 2008, the Communist Party of Nepal won the country’s general election. Soon after, the Assembly voted to change the form of government, moving away from a monarchy and creating a secular republic.

53. Caustic cleaners : LYES
Lye can be used as a pretty harsh household cleaner, for example to clean an oven.

54. Venomous vipers : ASPS
The asp is a venomous snake found in the Nile region of Africa. The asp is so venomous that it was used in ancient Egypt and ancient Greece as a means of execution. Cleopatra observed such executions noting that the venom brought on sleepiness without any painful spasms. Therefore, when the great queen opted to commit suicide, the asp was her chosen method.

60. Peyton’s brother on the gridiron : ELI
Even I know that Eli Manning and his older brother Peyton are both quarterbacks!

63. Summer hrs. in D.C. : EDT
On the other side of the Atlantic, Daylight Saving Time (DST) is known as “summer time”. The idea behind summer/daylight-savings is to move clocks forward an hour in spring and backwards in the fall so that afternoons have more daylight.