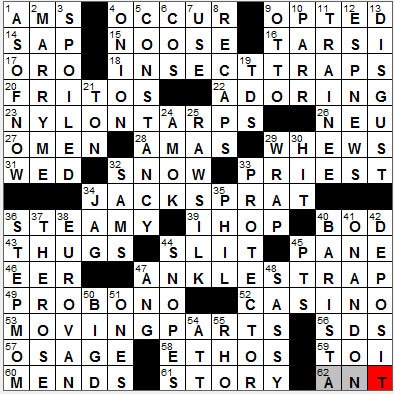 CROSSWORD SETTER: Paula Gamache
THEME: MOVING PARTS … each of the theme answers ends with an anagram of the words PARTS:


Today’s Wiki-est, Amazonian Googlies
1. Morning times, for short : AMS
The 12-hour clock has been around a long time, and was even used in sundial format in Ancient Egypt. Our use of AM and PM dates back to Roman times, with AM standing for Ante Meridiem (before noon) and PM standing for Post Meridiem (after noon). However, the Romans originally used the AM concept a little differently, by counting backwards from noon. So, 2AM to the Romans would be two hours before noon, or 10AM as we would call it today.

16. Bones below the tibia : TARSI
The tarsals are the ankle bones, equivalent to the carpals in the wrist.

The tibia is the larger of the two bones right below the knee, and is the strongest weight-bearing bone in the human body. “Tibia” is the Roman name for a Greek flute and it is thought that the shin bone was given the same name because flutes were often fashioned out of the shin bones of animals.

20. Snack chips made from corn : FRITOS
The Frito Corporation was started in 1932 by Elmer Doolin, basically in his mother’s kitchen. Doolin paid $100 for a corn chip recipe from a local restaurant and started producing Fritos at the rate of 10 pounds per day.

34. Eater of lean, in rhyme : JACK SPRAT
Jack Sprat was a nickname given in the 16th century to people of small stature. Jack featured in a proverb of the day:

Over time, this mutated into a nursery rhyme that is still recited heard in England:

45. One of several on a French door : PANE
French doors usually come in pairs, and have glass panels throughout the body of the door.

46. Always, in sonnets : E’ER
A sonnet is a short poem with varying rhyming schemes but always with 14 lines. The sonnet form has been around at least since the 13th century.

47. Feature of a gladiator sandal : ANKLE STRAP
The term “gladiator” means “swordsman”, coming from “gladius”, the Latin word for “sword”.

49. How some professional services are offered : PRO BONO
The Latin term “pro bono publico” means “for the public good”, and is usually shorted to “pro bono”. The term applies to professional work that is done for free or at a reduced fee as a service to the public.

52. Modern sight on many an Indian reservation : CASINO
The “casino” originated in the 1700s, first describing a public room for music or dancing. The name “casino” is a diminutive of “casa” meaning “house”.

56. ’60s teach-in grp. : SDS
Students for a Democratic Society (SDS) was an activist group in the sixties. The SDS organized the largest student strike in the history of the United States on 26 April 1968, with about a million students staying away from class that day.

57. Missouri river to the Missouri River : OSAGE
Much of the Osage River in Missouri is now taken up by two large reservoirs created behind two dams that provide power for St. Louis and the surrounding area. The two reservoirs are the Truman Reservoir and the Lake of the Ozarks.

59. French pronoun : TOI
“Toi” is the French word for “you”, when talking to someone with whom you are familiar.

Down
4. Source of the headline “World Death Rate Holding Steady at 100 Percent,” with “The” : ONION
“The Onion” is a satirical news network, with a print newspaper and a heavy online presence. “The Onion” newspaper was founded by two college students at the University of Wisconsin-Madison in 1988. The founders sold the operation a year later for about $20,000. The paper grew steadily until 1996 when it began to publish online and really took off. I think it’s worth a tad more than $20,000 today …

6. S.&P. 500 listings: Abbr. : COS
Standard & Poor’s (S&P) is a financial services company, famous for its stock market indices, especially the S&P 500. The company also publishes credit ratings for sovereign governments, and in 2011 famously lowered the rating of the US federal government from AAA to to AA+.

9. ___ von Bismarck : OTTO
Germany first became a country of its own in 1871 when the Princes of the various independent German states met at Versailles outside Paris to proclaim Wilhelm of Prussia as the Emperor of the German Empire. The man behind this historic development was Wilhelm’s Ministerpräsident, Otto von Bismarck. Von Bismarck was a powerful figure in Prussia and indeed on the world stage, earning him the nickname of the “Iron Chancellor”.

24. Wildly : AMOK
The phrase “to run amok” (sometimes “to run amuck”) has been around since the 1670s and is derived from the Malay word for “attacking furiously”, “amuk”. The word “amok” was also used as a noun to describe Malay natives who were “frenzied”. Given Malaya’s troubled history, the natives probably had good reason for that frenzy …

32. ___ Club (Costco competitor) : SAM’S
Sam’s Club is owned and operated by Walmart and is named after the company’s founder, Sam Walton.

34. Binge : JAG
The word “jag” is used to describe periods of unrestrained activity, particularly involving alcohol, and has been in use since the 1800s.

35. Punxsutawney ___ (Groundhog Day celeb) : PHIL
Punxsutawney is a borough in Pennsylvania, located about 80 miles northeast of Pittsburgh. Punxsutawney Phil is the famous groundhog that lives in the area. Phil comes out of his hole on February 2 each year and if he sees his shadow he goes back into his hole predicting six more weeks of winter weather. February 2 is known as Groundhog Day.

37. Bette Midler film loosely based on Janis Joplin’s life : THE ROSE
I am a huge, huge fan of Bette Midler. I love everything about the woman, her bawdy humor, her expansive personality, and of course her amazing voice. Midler will forever be associated with the 1979 film “The Rose

“, loosely based on the life of the self-destructive singer, Janis Joplin, with Bette Midler playing the lead. Bette Midler shows she can act in this movie, and boy does she show that she can sing. The title song was written by Amanda McBroom and became a huge hit for Midler in 1979.

38. Old Volkswagen seven-seater : EUROVAN
The Volkswagen Transporter T4 was made from 1990 to 2003, and was marketed in North America as the Volkswagen Eurovan.

40. Coffeehouse server : BARISTA
The person who serves coffee in a coffee shop is often called a “barista”. “Barista” is the Italian for “bartender”.

44. ___.com (urban myth debunker) : SNOPES
Snopes.com is the place to go if you want to check the validity or history of an urban legend or Internet rumor. The site was launched in 1995 by a couple in California, Barbara and David Mikkelson.

47. Film director Lee : ANG
Taiwanese director Ang Lee sure has directed a mixed bag of films, mixed in terms of genre but not in terms of quality. He was at the helm for such classics as “Sense & Sensibility

48. Fresh, in an impolite way : SASSY
“Sass”, meaning “impudence”, is a back formation from the word “sassy”. “Sassy” is an alteration of the word “saucy”, with “sassy” first appearing in English in the 1830s.

50. Home of the Cowboys, informally : BIG D
“Big D” is a nickname for the city of Dallas, Texas.

The Dallas Cowboys play in the National Football Conference (NFC) of the NFL. The Cowboys are famous for a lengthy streak of 20 consecutive winning seasons, from 1966 to 1985. They are the highest valued sports franchise in the country. The only team in the world that’s worth more money is the UK’s Manchester United soccer team.

55. Fraternity “P” : RHO
Rho is the Greek letter that looks just like our Roman letter “p”.