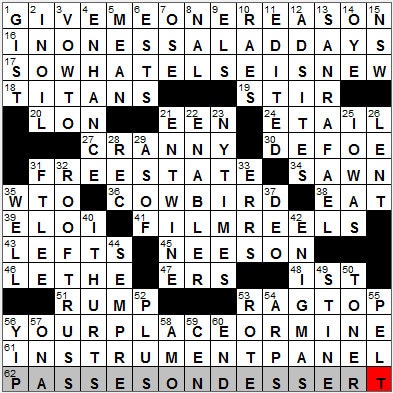 
Today’s Wiki-est, Amazonian Googlies
16. Young and inexperienced : IN ONE’S SALAD DAYS
One’s “salad days” are the days of our youth, days of carefree exuberance and idealism. The expression originated in William Shakespeare’s “Antony and Cleopatra” as Cleopatra refers to her youthful indiscretions saying:

“…My salad days, / When I was green in judgment, cold in blood…”

18. Olympians brought them down : TITANS
The Titans were a group of twelve elder deities in Greek mythology. In the celebrated Battle of the Titans, they were overthrown by the Olympians, twelve younger gods.

20. First name in horror : LON
Lon Chaney, Sr. played a lot of crazed-looking characters in the days of silent movies. He did much of his own make-up work, developing the grotesque appearances that became his trademark, and earning himself the nickname “the man of a thousand faces”. Most famous of all was his portrayal of “The Phantom of the Opera” in 1925.

21. “I should ___ die with pity”: King Lear : E’EN
Shakespeare was inspired to write his famous drama “King Lear” by the legend of “Leir of Britain”, the story of a mythological Celtic king.

24. Surfing business? : ETAIL
“Etail” is the term used these days for online shopping. Etail is often compared to regular shopping in the “real world” by juxtaposing it with a “brick and mortar” store.

31. Antebellum Ohio, e.g. : FREE STATE
The first part of the US to be completely free of slavery was the Northwest Territory, which later became the states of Ohio, Indiana, Michigan, Illinois, Wisconsin and Minnesota.

35. Intl. group whose biennial conferences are focuses of protest : WTO
The General Agreement on Tariffs and Trade (GATT) was laid down in 1949, a compromise solution reached by participating governments after they failed in their goal to establish the International Trade Organization. Finally in 1995, a similar organization was formed and the World Trade Organization (WTO) effectively succeeded GATT.

36. Follower of grazing cattle : COWBIRD
Cowbirds feed on insects, particularly those that are stirred up by cattle. As such, cowbirds tend to follow herds. They also have the habit of laying their eggs in the nest of other birds, as they tend not to spend enough time in one place in order to build their own nests.

39. Word repeated before “lama sabachthani” in Mark 15 : ELOI
According to the Gospel of Mark, Jesus uttered the following words while on the cross:

And at the ninth hour, Jesus shouted in a loud voice, “Eloi Eloi lama sabachthani?” which is translated, “My God, my God, for what have you forsaken me?”

43. Some crosses : LEFTS
I think the idea is that a boxer might make a cross with a left punch.

45. “Love Actually” co-star, 2003 : NEESON
Irish actor Liam Neeson got his big break when he played Oskar Schindler in the Spielberg epic, “Schindler’s List”. He was in the news more recently when he lost his wife, actress Natasha Richardson, in a tragic skiing accident in 2009.

“Love Actually” is a wonderful British romantic comedy, a film we watch every Christmas. The movie has a great ensemble cast and was written and directed by Richard Curtis. Curtis was also the man behind “Four Weddings and a Funeral”, Bridget Jones’s Diary” and “Notting Hill”. “Love Actually” is very much in the same style as these earlier films.

46. River that the dead drank from, in myth : LETHE
The Lethe is one of the five rivers of Hades in Greek mythology. All those who drank from the river Lethe experienced complete forgetfulness. The Greek word “lethe” means “oblivion, forgetfulness”.

Down
1. You’ll get it from CliffsNotes : GIST
CliffsNotes are student study guides here in the US. Publication of CliffsNotes started in 1958 under a licencing arrangement with a Canadian company that was already publishing similar texts called Coles Notes.

7. Sweet ending? : -OSE
The sugar we consume as “table sugar” is mainly sucrose that is extracted from sugar cane and sugar beet. We also consume lactose that occurs naturally in milk, and fructose that occurs naturally in fruit. But most of the sugar we eat or drink tends to be prepared commercially, the most famous being high-fructose corn syrup, which is glucose that is industrially processed into a glucose/fructose mix. Don’t get me started on the politics of food …

8. Big inits. in paperback publishing : NAL
New American Library (NAL) is a publisher that specializes in paperback reprints of classics. For many years NAL’s slogan was “Rich Reading at Low Prices”.

9. Urban rumblers : ELS
The Chicago “L” is the second largest rapid transit system in the US, with the New York City Subway being the largest. The “L” is also the second oldest, again with the New York Subway system having the honor of being around the longest. Note that the official nickname for the system is the “L” (originally short for “elevated railroad”), although the term “El” is also in common use (especially in crosswords as “ELS”). The L is managed by the Chicago Transit Authority (CTA).

10. Pulitzer-winning poet Armantrout and others : RAES
Rae Armantrout is a poet who teaches at the University of California, San Diego. Armantrout was the 2010 winner of the Pulitzer Prize for Poetry.

When you leave the city of San Francisco via the famous Golden Gate Bridge, you cross into Marin County.

23. Winner of over 100 Pulitzer Prizes, briefly : NY TIMES
Pultizer Prizes are awarded annually for achievements in journalism, literature and musical composition. The prize was established back in 1917 by the Hungarian-American newspaper publisher Joseph Pulitzer. Pulitzer left money in his will for the prize, and for its administration by Columbia University.

25. Chiwere speakers : IOWAS
The Iowa Native American people are a Siouan nation. The Iowa speak the Chiwere language, along with the Missouria and Otoe tribes.

26. Time to abstain : LENT
In Latin, the Christian season that is now called Lent was termed “quadragesima” (meaning “fortieth”), a reference to the forty days that Jesus spent in the desert before beginning his public ministry. When the church began its move in the Middle Ages towards using the vernacular, the term “Lent” was introduced. “Lent” comes from “lenz”, the German word for “spring”.

31. Home of the U.S. Army Women’s Museum : FT LEE
Fort Lee is a US Army post in Virginia. Fort Lee started out as Camp Lee not long after the US entered WWI in 1917. The camp was of course named after the Confederate Civil War General Robert E. Lee.

37. ___ volente : DEO
“Deo Valente” is Latin for “God willing”. If you read letters or emails from Ireland, you might come across “D.V.” in the text, as it is a common abbreviation that we Irish use to mean “God willing” or “Please God”.

44. Always, in scores : SEMPRE
“Sempre” is a musical term, a direction instructing the performer to play in the same manner throughout.

49. “Rotten School” series author : STINE
The author R. L. Stine is sometimes referred to as the Stephen King of children’s literature as he writes horror stories for young people.

54. Some MoMA works : ARPS
Hans Arp was a French artist renowned for his work with torn and pasted paper, although that wasn’t the only medium he used. He was the son of a French mother and German father and spoke both languages fluently. When he was speaking German, he gave his name as Hans Arp, but when speaking French he called himself Jean Arp. Both “Hans” and “Jean” translate into English as “John”.

58. “Odi et ___”: Catullus : AMO
Gaius Valerius Catullus was a Latin poet active in the days of the Roman Republic.