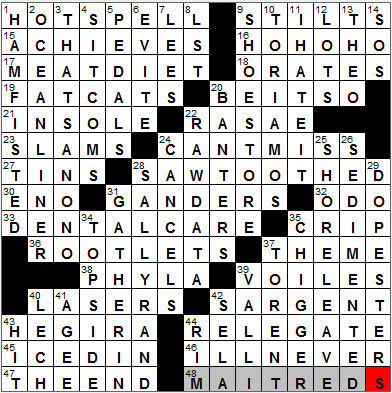 
Today’s Wiki-est, Amazonian Googlies
9. Three-toed wading birds : STILTS
The avocet is found in warm climates, usually in saline wetlands where it uses its up-curved bill to sweep from side-to-side in water searching for aquatic insects on which it feeds. Avocets, and other similar species, may go by the common name of “stilts”, a moniker given them because of their long legs.

22. Tabulae ___ : RASAE
Tabula rasa (plural: tabulae rasae) is the idea that people are born with a “blank slate”, and that knowledge comes from experience and perception.

27. Spam protection items? : TINS
Spam is a brand of pre-cooked meat product that has been made by Hormel since 1937. The ingredients in Spam include chopped pork shoulder, modified potato starch as a binder, and sodium nitrite as a preservative. Apparently 3.8 cans of Spam are consumed in the US every second. I find that hard to believe though …

30. Grammy-winning Brian : ENO
Brian Eno started out his musical career with Roxy Music. However, his most oft-played composition (by far!) is Microsoft’s “start-up jingle”, the 6-second sound you hear when the Windows operating system is booting up.

31. Looks : GANDERS
To take “a gander” is to take a long look. It’s a term we’ve been using since the 1880s and comes from the idea that in taking a long look one might be craning one’s neck like a goose (or gander).

32. ___ of Lagery (Pope Urban II’s real name) : ODO
Otho de Lagery (also Odo) took office as Pope Urban II in 1088. It was Pope Urban II who started the First Crusade, the military expedition by Roman Catholic Europe to occupy the Holy Lands that ran from 1096 to 1099.

35. Blood rival : CRIP
The Crips are a street gang here in the US, with origins in Los Angeles going back to 1969. It is believed that the Crips have up to 35,000 members today across the country, and there is even a presence in the US military both here and abroad. The main rivals of the Crips are the Bloods.

36. Ivy supporters : ROOTLETS
A rootlet is a small or divided root.

38. Parts of kingdoms : PHYLA
Biological classification is a method used to group organisms by biological type. The method uses a hierarchy of nested classes, with an organism being so classified to reflect its evolutionary traits. The major taxonomic ranks used are:

39. Curtain fabrics : VOILES
Voile is a soft and sheer fabric usually made from cotton that is often used as a window treatment. Voile curtains are similar to net curtains and may be used as mosquito nets, for example. Aptly enough, “voile” is the French word for “veil”.

40. Needs for some games of tag : LASERS
The name “Laser Tag” is really a misnomer as lasers are rarely used in the game. The “guns” actually send out infrared light, and not laser light, which is picked up by infrared detectors worn by the players.

42. Noted 19th- and 20th-century portraitist : SARGENT
John Singer Sargent was an American artist, best known for his portrait painting. Sargent trained as an artist mainly in Paris, although he found that he had to leave the city after one of his paintings was deemed “scandalous” by French society. The work was “Portrait of Madame X” (1884), a painting of a noted lady in society that was considered too risque and sensual. After the painting was exhibited, his commissions dried up and Sargent moved to London in order to continue his career. Today the “Portrait of Madame X” is considered by many to be Sargent’s best work.

43. Flight from danger : HEGIRA
“Hijra” (also hegira) is an Arabic word meaning migration or flight. In the Islamic tradition, “Hijra” is the name given to the journey of Muhammad with his followers from Mecca to Medina, a journey necessitated by a threat to assassinate the prophet.

Down
1. Clumsy : HAM-FISTED
The term “ham-fisted” has been in use since the 1920s when it was originally used to describe a pilot who was heavy on the controls of a plane.

2. Queen Mary, for one : OCEAN LINER
The RMS Queen Mary is a retired ocean liner that worked the North Atlantic for the Cunard line from 1936 to 1967. The Queen Mary, along with her sister ship the Queen Elizabeth, dominated the transportation of passengers between Europe and North America from the end of WWII until jet planes came into service in the late 50s. The Queen Mary was built in Clydebank, adjacent to Glasgow, Scotland. The ship was named after Queen Mary, the consort of King George V. The Queen Mary now sits in Long Beach, California where it is used as a hotel and a tourist attraction. It’s well worth a visit if you’re in the area …

6. Modern guest-list organizer : EVITE
An “evite” is an “electronic invitation”.

7. Onetime Virginia V.I.P.’s : LEES
Robert E. Lee is of course renowned as a southern officer in the Civil War. He was a somewhat reluctant participant in that Lee opposed the secession of his home state of Virginia from the Union. At the beginning of the war, President Lincoln invited Lee to take command of the whole Union Army, but Lee declined, choosing instead to stay loyal to his home state.

8. Amphibious carrier, for short : LST
LST stands for Landing Ship, Tank. LSTs were the large vessels used mainly in WWII that had doors at either ends through which tanks and other vehicles could roll off and onto beaches. The design concept persists to this day in the huge fleet of commercial roll-on/roll-off car ferries, all inspired by the LST.

10. Singer with the 1994 #1 alternative rock hit “God” : TORI AMOS
Tori Amos is an American pianist and singer. She started playing the piano at two years old, and was composing piano pieces by age five. She was playing in piano bars (chaperoned by her father) when she was 14. I’m going to have to find some of her music (I lead such a sheltered life …)!

13. Malcolm-Jamal’s “Cosby Show” role : THEO
Malcolm-Jamal Warner was the child actor who played Theo Huxtable on “The Cosby Show”. You can see the grown-up Warner today, playing Dr. Alex Reed on the BET sitcom “Reed Between the Lines”.

14. Plea for aid : SOS
The combination of three dots – three dashes – three dots, is a Morse signal first introduced by the German government as a standard distress call in 1905. The sequence is remembered as the letters SOS (three dots – pause – three dashes – pause – three dots), although in the emergency signal there is no pause between the dots and dashes, so SOS is in effect only a mnemonic. Similarly, the phrases “Save Our Souls” and “Save Our Ship” are simply mnemonics, introduced after the “SOS” signal was adopted.

28. Dancer who was a fan favorite? : SALLY RAND
Sally Rand was a burlesque dance, famous for her fan dance using ostrich feathers. “Sally Rand” was a stage name, and Rand’s real name was Helen Beck. The Rand name was given to her by film director Cecil B. DeMille, inspired by the Rand McNally road atlas. Rand’s most famous performance was at the 1933 Chicago World’s Fair. While performing at  the Fair she was arrested four times for public nudity, even though the nudity was only an illusion as Rand always wore a body suit.

29. Ones giving winner forecasts : DOPESTERS
“Dopester” is a slang term for someone who gives forecasts, mainly in the areas of sports and politics.

35. Tiny biter causing intense itching : CHIGGER
“Chigger” is the name given to a type of mite in its larval stage. Chiggers can feed on human skin cells, but don’t actual bite. They crawl into the host by injecting digestive enzymes into the skin forming a hole in which the larvae feed. The hole, called a stylosome, becomes irritated, swells and is very itchy. Ugh …

39. “Swearin’ to God” singer, 1975 : VALLI
Frankie Valli is a great singer, I think, best known for fronting the Four Seasons in the sixties. Valli had an incredible number of hits, with and without the Four Seasons. The list includes, “Sherry”, “Big Girls Don’t Cry”, “Walk Like a Man”, “Rag Doll”, “My Eyes Adored You” and “Grease”.

The word “lecher”, one who debauches, came into English in the 12th century. The original word in Old French was “lecheor”, literally “licker”.

41. 1966 A.L. Rookie of the Year : AGEE
Tommie Agee was a Major League Baseball player who played mainly with the Indians, White Sox and Mets. He was one of the “Amazin’ Mets”, and was famous for making two phenomenal catches in game three of the 1969 world series, potentially saving five runs.

42. Ward on a set : SELA
Sela Ward turns up in crosswords a lot. She played Teddy Reed in the TV show “Sisters” in the nineties, and was in “Once and Again” from 1999-2002. I don’t know either show, but I do know her from the medical drama “House” in which she played the hospital’s lawyer, and Greg House’s ex-partner. That was a fun role, I thought. Now she has turned up on “CSI: NY”, a very welcome and much-needed addition to the cast …