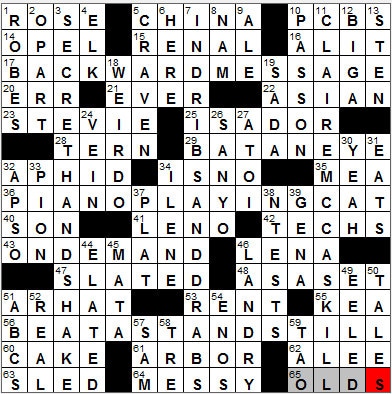 14. “Wir leben Autos” sloganeer : OPEL
Adam Opel founded his company in 1863, first making sewing machines in a cowshed. Commercial success brought new premises and a new product line in 1886, namely penny-farthing bicycles. Adam Opel died in 1895, leaving his two sons with a company that made more penny-farthings and sewing machines than any other company in the world. In 1899 the two sons partnered with a locksmith and started to make cars, but not very successfully. Two years later, the locksmith was dropped in favor of a licensing arrangement with a French car company. By 1914, Opel was the largest manufacturer of automobiles in Germany. My Dad had an Opel in the seventies, a station wagon (we’d say “estate car” in Ireland) called an Opel Kadett.

15. Kind of cortex : RENAL
The outermost layer of an organ is known as the cortex. The cortical layers that are most familiar to the man on the street (like me!) are the cerebral cortex of the brain and the renal cortex of the kidney.

17. “Turn me on, dead man,” supposedly, in the Beatles’ “Revolution 9” : BACKWARD MESSAGE
When the track “Revolution 9” from the Beatles’ “White Album” is played backwards, there is a section that appears to say “Turn me on, dead man”. This helped fuel an existing urban legend that Paul McCartney died in a car crash in 1966 and was replaced by someone who just looked like him.

21. Next-to-last word in the Lord’s Prayer : EVER
The Lord’s Prayer is a central prayer in Christian religions, and is found in two places in the New Testament. In the version in the Gospel of Matthew the last line of the prayer is “deliver from evil”. In the Gospel of Luke the last line is “lead us not into temptation”. The last words of the prayer as it most often said today are:

22. Like sherpas : ASIAN
In the Tibetan language, Sherpa means “eastern people” (sher = east, pa = people). Sherpas are an ethnic group from Nepal, but the name is also used for the local guides who assist mountaineers in the Himalayas, and particularly on Mount Everest.

23. Nicks producing cuts? : STEVIE
Singer Stevie Nicks came to fame as the lead singer of Fleetwood Mac. Nicks has a very distinctive voice, heard at its best in the famous 1977 album “Rumours”.

28. Coastal diver : TERN
Terns are seabirds that are found all over the world. The Arctic Tern makes a very long-distance migration. One Arctic Tern that was tagged as a chick in Great Britain in the summer of 1982, was spotted in Melbourne, Australia just three months later. The bird had traveled over 14,000 miles in over those three months, an average of about 150 miles a day. Remarkable …

32. Morsel for a ladybug : APHID
Aphids are called “greenfly” back in the British Isles where I come from. The most effective way to control aphids in my experience is to make sure there are plenty of ladybugs in the garden (called ladybirds in Ireland!).

34. “There ___ spoon” (“The Matrix” line) : IS NO
“There is no spoon” is a line uttered by the character Neo in “The Matrix” film. The idea is that Neo learns that the spoon he holds in his hand is not real and so he can manipulate it with his mind.

35. Apology start : MEA
Roman Catholics are very familiar with the Latin phrase “mea culpa” meaning “my fault”, as it is used in the Latin Mass. The additional term “mea maxima culpa” translates as “my most grievous fault”.

36. Subject of a 2007 YouTube sensation : PIANO-PLAYING CAT
Nora is a grey tabby cat from New Jersey who features in a YouTube video that went viral in 1997. In the clip, Nora climbs up to a piano keyboard and “plays” the instrument, tapping away at the keys.

41. Longtime “Headlines” reader : LENO
“The Tonight Show with Jay Leno” features a segment known as “Headlines”. In the segment, Leno reads out newspaper headlines submitted by viewers from all around the world. They can be hilarious, either by design or by accident.

46. Olin of “Havana” : LENA
The lovely Lena Olin is a Swedish actress, clearly someone who had acting in her blood. Olin’s mother was the actress Britta Holmberg and her father the actor and director Stig Olin. Lena Olin had a very successful career in Sweden, often working with the great Ingmar Bergman. Olin’s breakthrough international and English-speaking role was playing opposite Daniel Day-Lewis in “The Unbearable Lightness of Being” released in 1988. Way back in 1974, the lovely Miss Olin was crowned Miss Scandinavia in a beauty pageant for Nordic women held in Helsinki, Finland.

51. Enlightened Buddhist : ARHAT
“Arhat” is a Sanskrit word, the exact translation of which is somewhat disputed, with the various Buddhist traditions assuming different meanings. Translations vary from “worthy one” to “vanquisher of enemies”.

55. Mauna ___ : KEA
Mauna Kea is a dormant volcano on the Big Island of Hawaii, the peak of which is the highest point in the whole state. Mauna Kea is in effect the tip of a gigantic volcano rising up from the seabed. So, the “real” height of the volcano is over 33,000 feet, which is significantly “taller” than even Mount Everest, which has an elevation of 29,029 feet above sea level.

62. How a ship might turn : ALEE
“Alee” is the direction away from the wind. If a sailor points into the wind, he or she is pointing “aweather”.

4. Rotarian relative : ELK
The Benevolent and Protective Order of Elks (BPOE) was founded in 1868 and is a social club that has about a million members today. The Elks started out as a group of men getting together in a “club” in order to get around the legal opening hours of taverns in New York City. The club took on a new role as it started to look out for poor families of members who passed away. The club now accepts African Americans as members (since the seventies) and women (since the nineties), but atheists still aren’t welcome.

9. Bitter, e.g. : ALE
The term “bitter” is used in England for what we are more likely to call “pale ale” here in North America.

11. Missouri’s first elected female senator : CLAIRE MCCASKILL
Claire McCaskill has been a US Senator for Missouri since 2007.

12. N.Y.C. racetrack moniker : BIG A
The Aqueduct Racetrack in Queens, New York is known by many as the Big A. The track opened in 1894 and was located near an aqueduct belonging to the Brooklyn Water Works, which gave the name.

19. Actress Thompson : SADA
Sada Thompson was an actress from Des Moines, Iowa. Thompson is best known for playing the mother and wife in the eighties television drama series called “Family”.

26. Panasonic subsidiary : SANYO
Sanyo is a Japanese electronics manufacturer, based near Osaka and founded in 1947. The company name means “three oceans” reflecting the original aim to sell its products all around the world (across three oceans, the Atlantic, the Pacific and the Indian).

32. Tail of a dog? : APSO
The Lhasa apso breed of dog originated in Tibet and is named after Lhasa (the capital city) and apso (a Tibetan word meaning “bearded”). The Lhasa apso has been around since 800 BC and is one of the oldest breeds in the world, one very closely related to the ancestral wolf.

33. Zero-spin particle : PION
“Pion” is short for “pi meson”, and is the name given to a subatomic particle.

34. “The L Word” producer Chaiken : ILENE
Ilene Chaiken was the executive producer for the Showtime drama series “The L Word”. The show deals with lesbian, bisexual and transgender people living in West Hollywood. The title refers to “the L word”: lesbian.

37. Realty reference : PLAT
A plat is a map showing actual and planned features, so a town might have a plat showing existing and intended buildings.

38. Big blasts from the past, briefly : N-TESTS
The first test of a hydrogen bomb was in 1954 at Bikini Atoll in the Marshall Islands. The test may have been a technical success but it was an environmental disaster because the actual yield of 15 megatons was unexpected (the military anticipated only 4-6 megatons). The resulting nuclear fallout caused many deaths and led to birth defects in generations to come.

39. Actress Rowlands : GENA
Gena Rowlands is an actress best known for the films made with her husband, actor and director John Cassavetes. More recently, Rowlands played a lead role opposite James Garner in the weepy, weepy 2004 film “The Notebook”. “The Notebook” was directed by her son, Nick Cassavetes.

45. ___ Hari : MATA
Mata Hari was the stage name used by Margaretha Geertuida Zella, born in the Netherlands in 1876. After an unsuccessful and somewhat tragic marriage, Zella moved to Paris in 1903 where she struggled to make a living. By 1905 she was working as an exotic dancer and using the name Mata Hari. She was a successful courtesan, notably moving in various circles of high-ranking military officers. She apparently worked as a double agent, both for the French and the Germans. When Mata Hari was accused by the French of passing information to the enemy, she was tried, found guilty and executed by firing squad at the height of WW1, in 1917.

46. Hall-of-Fame football coach Tom : LANDRY
Although Tom Landry was a football player, he is best known as the head coach for the Dallas Cowboys. As coach he had a run of 20 consecutive winning seasons, a record that has yet to be broken. Landry had an impressive record during WWII as well. He completed a tour of 30 missions as co-pilot in a B-17 Flying Fortress in Europe, and survived a crash landing in Belgium. In his days with the Dallas Cowboys, Landry was noted for wearing a fedora hat, and there is even an image of that famous hat on his tombstone in Texas State Cemetery. He passed away in the year 2000.

49. Sniggled : EELED
Sniggling is the name of a fishing technique used to catch eels.

54. 1961 space chimp : ENOS
Enos was a chimpanzee who was launched into Earth orbit in 1961 by NASA on a Mercury Atlas 4 rocket. Enos’s flight was a rehearsal for the first orbital flight made by an American, astronaut John Glenn. Enos returned from his mission safely, but died the following year from dysentery.

57. Friend of Frodo : SAM
Samwise Gamgee is the sidekick to Frodo Baggins in Tolkien’s “The Lord of the Rings”.

Frodo Baggins is a principal character in J. R. R. Tolkien’s “The Lord of the Rings”. Frodo is a Hobbit, and is charged with the quest of destroying Sauron’s Ring in the fires of Mount Doom.

59. Way overseas : TAO
The Chinese character “tao” translates as “path”, but the concept of Tao signifies the true nature of the world.