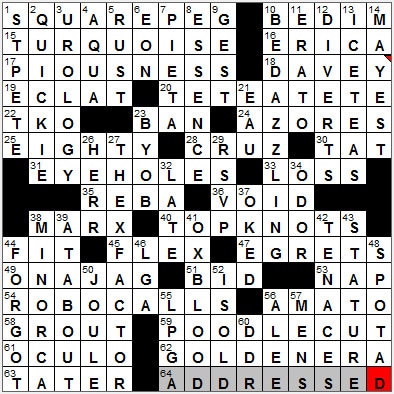 Today’s Wiki-est, Amazonian Googlies
Across
15. Iranian export : TURQUOISE
“Turquoise” is the Old French word for “Turkish”. The name was given to the blue mineral because much of it was brought into Europe from Turkey, although most of the turquoise mines were located in the Khorasan Province of Iran.

16. Actress Hubbard of “Akeelah and the Bee” : ERICA
Erica Hubbard is an actress and model from Chicago. Hubbard’s big recurring role at the moment is on the BET sitcom “Let’s Stay Together”.

18. Goliath’s master of old TV : DAVEY
“Davey and Goliath” is a stop-motion television show for children that aired in the sixties. The lead characters are a young boy called Davey Hansen, and his “talking” dog Goliath. The show was produced by the Lutheran Church of America and so had a spiritual theme.

19. Showiness : ECLAT
Éclat can mean a brilliant show of success, or the applause or accolade that one receives. The word derives from the French “éclater” meaning “to splinter, burst out”.

20. Private chat : TETE A TETE
A “tête-à-tête” is a one-on-one meeting, literally “head-to-head” in French.

22. Ref’s call : TKO
In boxing, a knockout (KO) is when one of the fighters can’t get up from the canvas within a specified time, usually 10 seconds. This can be due to fatigue, injury, or the participant may be truly “knocked out”. A referee, fighter or doctor may also decide to stop a fight without a physical knockout, especially if there is concern about a fighter’s safety. In this case the bout is said to end with a technical knockout (TKO).

23. Secret rival : BAN
Ban was the first roll-on deodorant, introduced in 1952. The formulation for Ban is the same as the brand called Mum, the first commercial deodorant, which dates back to the late 1800s.

Secret is an antiperspirant/deodorant made by Procter & Gamble, first introduced in 1956 as a cream that was applied with the fingers (ick!). There followed a roll-on version in 1958, a spray in 1964 and the solid stick in 1978.

24. Santa Maria’s chain : AZORES
The Azores is an archipelago of nine volcanic islands in the North Atlantic lying about 1,000 miles west of Portugal. The Azores are an autonomous region belonging to Portugal.

25. Number retired for Steve Largent and Jerry Rice : EIGHTY
Steve Largent is a retired American football player who spent the whole of his professional playing career with the Seattle Seahawks. Largent went into politics after retiring from the game and served in the US House of Representatives for eight years representing a district in Oklahoma.

28. One hanging in una iglesia : CRUZ
In Spanish, a cross (cuz) hangs in a church (una iglesia).

30. Truncated parlor piece? : TAT
The word “tattoo” was first used in English in the writings of the famous English explorer Captain Cook. In his descriptions of the indelible marks adorning the skin of Polynesian natives, Cook anglicized the Tahitian word “tatau” into our “tattoo”.

35. Sitcom mom of Cheyenne and Kyra : REBA
Reba McEntire is a country music singer and television actress. McEntire starred in her own sitcom called “Reba” that aired on the WB and the CW cable channels from 2001 to 2007.

38. “I have had a perfectly wonderful evening, but this wasn’t it” speaker : MARX
Groucho Marx’s real name was Julius Henry Marx. By the time Groucho started his successful, post-Hollywood career hosting the quiz show “You Bet Your Life”, he was sporting a real mustache. For all his movies, his mustache was painted on with greasepaint.

40. Kewpie doll features : TOPKNOTS
Kewpie dolls were very popular in the early 1900s. The name “kewpie”comes from the Roman god “Cupid”. Kewpie dolls were first produced in Germany (one was mentioned in “The Diary of Anne Frank”), and were made out of bisque, then celluloid and eventually hard plastic. If you have one of the older dolls in your attic, go get it. It might be worth thousands of dollars.

45. Display some guns : FLEX
“Guns” is a slang term for very strong arms or biceps.

47. Fen frequenters : EGRETS
At one time the egret species was in danger of extinction due to excessive hunting driven by the demand for plumes for women’s hats.

49. Painting the town red : ON A JAG
The word “jag” is used to describe periods of unrestrained activity, particularly involving alcohol, and has been in use since the 1800s.

53. It can be felt on felt : NAP
A “nap” is a soft and perhaps fuzzy surface on cloth or leather.

54. Things placed during a political campaign : ROBOCALLS
Political calls, including robocalls, are exempt from regulation by the Federal Trade Commission (FTC), so we can’t stop them by putting our numbers on the “Do Not Call Registry”.

59. Short, curly hairdo : POODLE CUT
The “poodle cut” hairstyle was popular in the 1950s. The style was a short cut, with the hair permed in very tight curls. One woman who famously sported the poodle cut was First Lady Mamie Eisenhower.

63. Four-bagger : TATER
Apparently, a baseball has long been referred to as a potato, or a “tater”. In the seventies, a long ball started to be called a “long tater”, and from this a home run became a “tater”.

4. Relative of cerulean : AQUA
Cerulean is a blue color, with the name probably coming from the Latin “caeruleus” meaning “blue”.

7. Passion portrayal : PIETA
Michelangelo’s Pietà can be seen in St. Peter’s Basilica in the Vatican. Like all images known as the Pietà, the sculpture depicts the Virgin Mary cradling the dead body of Jesus. Michelangelo inscribed his signature along a sash worn by the Virgin, the only time the artist is known to have signed his work.

9. Tale of derring-do : GEST
Our word “gest”, meaning a great deed or an exploit, has been around since about 1300 and comes from the Old French word “geste” meaning the same thing. These days “geste” can also mean “gesture”.

As one might expect, “derring-do” comes from the phrase “daring to do”, which back in the 14th century was written as “dorrying don”.

11. Lyre holder of myth : ERATO
In Greek mythology, Erato was the Muse of Lyric Poetry.

Lourdes is a town in France where a 14-year-old peasant girl reported visions of the Virgin Mary. One of the instructions Mary gave to the girl was to drink water from a nearby spring. A local priest and bishop bought the land where the spring was located and developed it for visitors. This all happened in 1858, and now over 80,000 pilgrims a year visit the site.

23. Abbr. often preceding 29-Down : BYOB
Bring Your Own Beer/Bottle/Booze (BYOB).

27. Competition TV series with versions in over 30 countries : THE X FACTOR
“The X Factor” is another one of Simon Cowell’s TV shows and now a worldwide franchise, a show that searches for talented singers. “The X Factor” is in effect a spin-off the the UK show “Pop Idol” (produced as “American Idol” here in the US). And “The X Factor” is here in America as well. Oh joy …

34. Radon’s lack : ODOR
Radon is a radioactive gas, a byproduct produced when uranium decays naturally in the earth. Radon gas can collect and accumulate in buildings and rooms that are particularly well insulated with very little air exchange. The danger is very real, as radon is listed as the second most frequent cause of lung cancer after cigarette smoke.

42. Some bridge holdings : TENACES
In the wonderful card game of bridge, a tenace is a broken sequence of honor cards, like AQ or KJ.

Fiorello La Guardia was the Mayor of New York from 1934 to 1945, racking up three full terms in office. The famous airport that bears La Guardia’s name was built at his urging, stemming from an incident that took place while he was in office. He was taking a TWA flight to “New York” and was outraged when the plane landed at Newark Airport, in the state of New Jersey. He demanded that the flight take off again and land at a small airport in Brooklyn. A gaggle of press reporters joined him on the short hop and he gave them a story, urging New Yorkers to support the construction of a new commercial airport within the city’s limits. The new airport, in Queens, opened in 1939 as New York Municipal, often called “LaGuardia” as a nickname. It was officially relabeled as “LaGuardia” in 1947.

50. Work measure : JOULE
James Joule was an English physicist who spent much of his life working in the family brewing business. Joule used his work in the brewery to study the relationship between heat and mechanical work. In honor of his achievements, his name is used for the unit of energy in the International System of Units (the joule).

55. Green org. for women? : LPGA
The Ladies Professional Golf Association (LPGA) was founded in 1950 by a group of 13 lady golfers, and today it is the oldest ongoing women’s sports professional organization in the US.

56. Out of harm’s way, in a way : ALEE
“Alee” is the direction away from the wind. If a sailor points into the wind, he or she is pointing “aweather”.