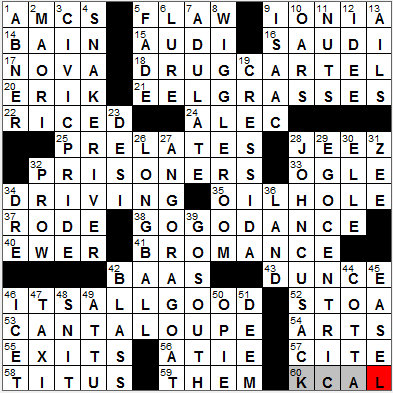 Today’s Wiki-est, Amazonian Googlies
Across
1. Gremlins of the ’70s, e.g. : AMCS
The Gremlin is a subcompact car that was made by AMC in the 1970s. The Gremlin was positioned to compete with the Chevy Vega and Ford Pinto from the US, and with imports like the VW Beetle and Toyota Corona. On the list of ex-Gremlin drivers are Presidents Bill Clinton and George H. W. Bush.

9. Neighbor of Lydia : IONIA
Lydia and Ionia were ancient territories in land now covered by modern-day Turkey. Both territories eventually fell under Greek and then Roman rule.

14. ___ Capital (investment firm) : BAIN
Bain Capital is a private equity firm headquartered in the Hancock Building in Boston, Massachusetts. Bain Capital is much in the news these days as one of the three founders was Governor Mitt Romney.

The Audi name has an interesting history. The Horch company was founded by August Horch in 1909. Early in the life of the new company, Horch was forced out of his own business. He set up a new enterprise and continued to use his own name as a brand. The old company sued him for using the Horch name so a meeting was held to choose something new. Horch’s young son was studying Latin in the room where the meeting was taking place. He pointed out that “Horch” was German for “hear” and he suggested “Audi” as a replacement, the Latin for “listen”.

16. Like a national flag with a sword on it : SAUDI
The flag of Saudi Arabia has a green background on which there is a white sword, and above the sword an inscription in white lettering. The inscription is the Islamic declaration of faith, and translates as “There is no God but Allah and Muhammad is the messenger of Allah”. Manufacturing the flag is a little tricky as it has two different sides, so the writing must read correctly (from right-to-left) on both sides. Also, the sword which lies horizontally under the inscription, it has to point away from the flagpole on both sides. If you think about it, each side is therefore a different design.

17. Rising star? : NOVA
A nova is basically a star that suddenly gets much brighter, gradually returning to its original state weeks or even years later. The increased brightness of a nova is due to increased nuclear activity causing the star to pick up extra hydrogen from a neighboring celestial body. A supernova is very different from a nova. A supernova is a very bright burst of light and energy, created when most of the material in a star explodes. The bright burst of a supernova is very short-lived compared to the sustained brightness of a nova.

25. Holy higher-ups : PRELATES
A prelate is a high-ranking clergy member. “Prelate” comes from the Latin “praelatus” meaning “to set above”, so a prelate is one who is set above others.

28. “All in the Family” exclamation : JEEZ
“All in the Family” is an American sitcom, a remake of the incredibly successful BBC show called “Till Death Us Do Part”. Both the UK and US versions of the sitcom were groundbreaking in that the storyline brought into focus topics previously considered unsuitable for a television comedy, including racism, homosexuality, women’s liberation, menopause and impotence. “All in the Family” is one of only three TV shows that has topped the Nielsen ratings for five consecutive seasons (the other two are “The Cosby Show” and “American Idol”).

38. It prompts tipping in a bar : GO-GO DANCE
Go-go dancing started in the early sixties. Apparently, the first go-go dancers were women at the Peppermint Lounge in New York City who would spontaneously jump up onto tables and dance the twist. It wasn’t long before clubs everywhere started hiring women to dance on tables for the entertainment of their patrons. Out in Los Angeles, the “Whisky a Go Go” club on Sunset Strip added a twist (pun intended!), as they had their dancers perform in cages suspended from the ceiling, creating the profession of “cage dancing”. The name “go-go” actually comes from two expressions. The expression in English “go-go-go” describes someone who is high energy, and the expression in French “a gogo” describes something in abundance.

41. Relative of a man crush : BROMANCE
A “bromance” is the name given these days to a close relationship between two straight males.

43. Reluctant wearer of a cap : DUNCE
John Duns Scotus was a theologian and scholar in the Middle Ages, responsible for many writings that were used as textbooks in British universities of the day. New ideas developed during the English Renaissance, but Duns Scotus and his followers resisted the changes. The word “dunse” came into use as a way of ridiculing those refusing to learn anything new, a precursor to our modern usage of “dunce”.

52. Classic covered walk : STOA
A stoa was a covered walkway in Ancient Greece. A stoa usually consisted of columns lining the side of a building or buildings, with another row of columns defining the other side of the walkway. The columns supported a roof. Often stoae would surround marketplaces in large cities.

53. Composition of some orange spheres : CANTALOUPE
The cantaloupe is the most popular type of melon consumed in the US. Apparently the cantaloupe was first cultivated in Cantalupo in Sabina, a town near Rome in Italy.

54. Word with letters? : ARTS
“Arts and letters” is a term used for fine arts and literature.

58. Flavian dynasty ruler : TITUS
Titus Flavius Verspasianus was a successful military commander and Roman Emperor from 79 to 81 AD. It was Titus who laid siege to and destroyed the city and temple of Jerusalem, for which he was honored with the erection of the Arch of Titus that stands in Rome to this day. The Arch of Titus is the inspiration for many other famous arches around the world including the l’Arc de Triomphe in Paris.

The Flavian dynasty was a period of 25 years in the days of the Roman Empire. The Flavian emperors were Vespasian and his two sons, Titus and Domitian.

Down
1. ___ J. Mikva, White House counsel under Clinton : ABNER
Abner J. Mikva is a former Member of the US House of Representatives, a Democrat from the state of Illinois. Mikva also served as White House Counsel in the days of President Bill Clinton.

2. Much-tattooed people : MAORI
The Māori are the indigenous people of New Zealand.
The Māori are eastern Polynesian in origin and began arriving in New Zealand relatively recently, starting some time in the late 13th century. The word “māori” simply means “normal”, distinguishing the mortal human being from spiritual entities.

4. Carver of Hells Canyon : SNAKE RIVER
Hells Canyon in the northwestern US is the deepest river gorge in the country. The river that carved out the canyon is the Snake River, itself a tributary of the Columbia.

9. Hull of the Constitution : ISAAC
Isaac Hull was a commodore in the US Navy. Hull was the commander of the navy frigate Constitution when it engaged and defeated HMS Guerriere during the War of 1812. It was this engagement that earned the Constitution the nickname “Old Ironsides”.

“Old Ironsides” was a nickname given to the USS Constitution even though she is actually a wooden-hulled ship. The Constitution was launched in 1797 and can still be seen at sea today. She is the oldest commissioned naval vessel in the world. You can visit Old Ironsides at the Boston Navy Yard, where I had the privilege of touring her in 2011. As an old sailor, I’d say she is the best-maintained ship I’ve ever been on and paradoxically, she is also the oldest. Really, really beautiful …

19. Shakespearean title character : CRESSIDA
William Shakespeare wrote his tragedy “Troilus and Cressida” in 1602. The play was inspired by “The Iliad”, and is a retelling of events during the Trojan War leading up to the death of Hector.

23. First name in ’50s TV : DESI
Desi Arnaz was of course famous for his turbulent marriage to Lucille Ball. Desi Arnaz was a native of Cuba, and was from a privileged family. His father was Mayor of Santiago and served in the Cuban House of Representatives. However, the family had to flee to Miami after the 1933 revolt led by Batista.

27. Mohair source : ANGORA GOAT
Angora wool comes from the Angora rabbit. On the other hand, the Angora goat produces the wool known as mohair.

28. “High Fidelity” star, 2000 : JOHN CUSACK
John Cusack is an actor from Evanston, Illinois. John is noted for appearing in several films with his equally talented actress sister, Joan Cusack. I think the John Cusack film that I most enjoy is 1997’s “Grosse Pointe Blank”.

“High Fidelity” is a 2000 comedy-drama film starring John Cusack. “HIgh Fidelity” is based on a novel of the same name by Nick Hornby (who also wrote the books that inspired the movies “About a Boy” and “Fever Pitch”).

29. Like a diva : EGOCENTRIC
“Diva” comes to us from Latin via Italian. “Diva” is the feminine form of “divus” meaning “divine one”. The word is used in Italy to mean goddess or fine lady, and especially is applied to the prima donna in an opera. We often use the term in English these days to describe a singer with a big ego.

30. W competitor : ELLE
“Elle” magazine was founded in 1945 in France and today has the highest circulation of any fashion magazine in the world. “Elle” is the French word for “she”.

“W” is an American fashion magazine that first hit newsstands in 1971.

34. 2009 Grammy winner for “Crack a Bottle,” briefly : DRE
Dr. Dre is the stage name of rapper Andre Romelle Young. Dr. Dre is known for his own singing career as well as producing records and starting the careers of others such Snoop Dog, Eminem and 50 Cent.

42. Bill of fashion : BLASS
Bill Blass was a fashion designer from Fort Wayne, Indiana. Blass volunteered for the US Army during WWII. He had a very creative role in the military, working for the 603rd Camouflage Battalion. The unit’s job was to fool the German’s into thinking Allied troops were in fake locations. Blass worked with the battalion in support of the Battle of the Bulge, the crossing of the Rhine river and the North Africa campaign.

Rapper Ice-T must be sick of having his name come up as an answer in crossword puzzles. Maybe he should have stuck to his real name, Tracy Marrow? Then again, maybe not …

49. 1943 U.S.-vs.-Japan battle site : ATTU
Attu is the westernmost island in the Aleutian chain, and so is the westernmost part of Alaska. Japanese forces took the island in October 1942, eventually landing as many as 2,900 soldiers there. In May 1943, the US Army retook the island in twenty days of fighting that is now called the Battle of Attu, the only land battle to take place on US soil during WWII. I am very proud of my father-in-law, who served in the Aleutians in WWII …

50. ___ Taylor, old sitcom character : OPIE
Ron Howard sure has come a long way since playing Opie Taylor on “The Andy Griffith Show”. Howard has directed some fabulous movies, including favorites of mine like “Apollo 13”, “A Beautiful Mind” and “The Da Vinci Code”. And today, “Opie” is a grandfather …