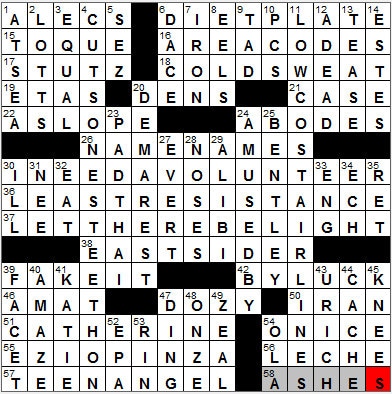 15. Pillbox relative : TOQUE
A toque was a brimless style of hat that was very fashionable in Europe, in France in particular, in the 13th to 16th centuries. Nowadays we associate toques with chefs, as it is the name given to a chef’s hat (called a “toque blanche” in French, a “white hat”). A chef’s toque is quite interesting. Many of them have exactly 100 pleats, often said to signify the number of ways that an egg can be cooked.

16. New York City has six : AREA CODES
Area codes were introduced in the 1940s. Back then the “clicks” one heard when dialling a number led to mechanical wear on various pieces of equipment. In order to minimize overall mechanical wear, areas with high call volumes were given the most efficient area codes (lowest number of clicks). That led to New York getting the area code 212, Los Angeles 213 and Chicago 313.

17. Onetime 25-Down rival : STUTZ
The Stutz Motor Company was a manufacturer of luxury cars in Indianapolis. Stutz was noted as a producer of fast cars and luxury vehicles for the elite.

37. First commandment? : LET THERE BE LIGHT
The third verse in the Book of Genesis in the Bible is “And God said, Let there be light: and there was light.”

38. Bowery boy, say : EASTSIDER
The Bowery Boys were an anti-Catholic, anti-Irish gang primarily active in the Bowery section of New York City in the mid-1800s.

50. Azadi Stadium setting : IRAN
Azadi Stadium is Iran’s national stadium, a huge facility that is able to seat 100,000 spectators. The Azadi Stadium was built when Iran hosted the Asian Games in 1974, and is primarily used for soccer matches. “Azadi” is a Persian word meaning “freedom, liberty”.

51. “Great” 18th-century ruler : CATHERINE
Catherine the Great (aka Catherine II) was Empress of Russia for 34 years, up to her death in 1796. Her long reign is considered by many to have been Russia’s Golden Age.

54. Sure to be won : ON ICE
“On ice” is a slang term with three distinct meanings:

– Assured of success (as in “with his connections, his job application was on ice”)
– In reserve (as in “he had extra tickets on ice should they be needed”)
– Away from public notice (as in “he spent several years on ice, his popularity declining)

55. Lana Turner’s “Mr. Imperium” co-star, 1951 : EZIO PINZA
Ezio Pinza was an opera singer from Italy. Pinza performed for many years with the Metropolitan Opera in New York before retiring from the Met in 1948. He then launched a career on Broadway and in Hollywood.

57. #1 hit song that asks “Are you somewhere up above?” : TEEN ANGEL
“Teen Angel” is a popular song written by Jean Dinning and released by her husband Mark Dinning in 1959. The story told in the song is tragic in the extreme, involving a girl who gets run over by a train.

Down
2. 1990s Senate majority leader and family : LOTTS
Trent Lott was raised Democrat in Mississippi, but served in Congress as a Republican. Lott ran into trouble for remarks he made that were interpreted as being racially motivated, and ended up resigning in 2007.

3. Like a joule and a watt-second, e.g. : EQUAL
James Joule was an English physicist who spent much of his life working in the family brewing business. Joule used his work in the brewery to study the relationship between heat and mechanical work. In honor of his achievements, his name is used for the unit of energy in the International System of Units (the joule).

6. Bait fish for pike angling : DACE
Dace are small freshwater fish, such as minnow and carp.

9. Skosh : TAD
“Skosh” is a slang term meaning “a little bit”, originally military slang that came out of the Korean War. “Skosh” derives from the Japanese word “sukoshi” which translates as “few, little, some”.

13. Mimic Mae West : TEASE
Mae West was always pushing the envelope when it came to the “sexy” side of show business, even in her early days in Vaudeville. One of the first plays in which she starred on Broadway was called “Sex”, a work she penned herself. The show was a sell-out, but city officials had it raided and West found herself spending ten days in jail after being convicted of “corrupting the morals of youth”. She started in movies in 1932, already 38 years old. West used her experience writing plays to rewrite much of the material she was given, and so really she was totally responsible for her own success and on-screen appeal.

14. Simon of opera : ESTES
Simon Estes is an African-American baritone bass, and is considered one of a small group of performers that broke through a racial barrier that was present in the world of opera. Estes moved to Europe in the sixties to try to launch his career in an environment that was perhaps a little less prejudicial to people of African descent. There he performed in all the great opera houses including La Scala and Covent Garden. He did some guest performances in the US through the sixties and seventies, but it wasn’t until 1981 that he was offered a contract to sing with the Metropolitan Opera in New York City.

20. William of “My Three Sons” : DEMAREST
Uncle Charley on the TV sitcom “My Three Sons” was played by two actors over the life of the show. The role was originated by William Frawley, but he had to drop out due to failing health. William Demarest took over in 1965 and played Uncle Charlie right through the end of the show’s run in 1972.

23. Dish garnished with crushed peanuts : PAD THAI
The delicious dish called Pad Thai is a meld of stir-fried rice noodles with tamarind juice, red chili pepper plus a mix of vegetables and possibly tofu, meat or fish. It is usually topped with crushed peanuts, coriander and lime. The name “Pad Thai” translates as “fried Thai style”.

25. Speed Six maker : BENTLEY
The Bentley is a luxury car that is built in the UK. Bentley Motors was founded in 1919 by W. O. Bentley, and taken over by Rolls Royce in 1931. The company has been owned by Volkswagen since 1998.

27. Winner of seven French Opens : EVERT
Chris Evert is a former professional tennis player from Fort Lauderdale, Florida. Evert has the best winning percentage in professional tennis, man or woman worldwide, losing less than 10% of all her matches.

31. Genealogy word : NEE
“Née” is the French word for “born”, when referring to a female. The male equivalent is “né”.

33. Like Elvis Costello, but not Elvis Presley: Abbr. : ENG
Elvis Costello is an English singer and songwriter whose real name is Declan MacManus. Although Costello is more associated with the punk rock music scene, he is very active with the Jazz Foundation of America. He does a lot of work with the foundation to help jazz and blues musicians in need, especially after Hurricane Katrina.

34. Command level: Abbr. : ECH
“Ech.” is the abbreviation for “echelon”. We use the word echelon to describe a rank, particularly in the military. The term comes from French, in which language it has the same meaning, although the original meaning in Old French is “rung of a ladder”.

41. She went to Haiti, in a Cole Porter song : KATIE
“Katie Went to Haiti” is a song from the Cole Porter musical “DuBarry Was a Lady”. The original Broadway cast included Bert Lahr (the Cowardly Lion from “The Wizard of Oz”), Ethel Merman and Betty Grable. A 1943 movie version of the show starred Red Skelton, Lucille Ball and Gene Kelly.

43. Player of TV detective Spenser : URICH
Robert Urich was an actor famous for starring in television’s “Vega$” and “Spenser: For Hire”.

44. Auxiliary memory for fast retrieval : CACHE
In the world of computers a “cache” is a component that stores data locally so that there is no need to go get that original data all over again after the first usage. Applications that use a cache move along more quickly. A good example is a web browser that will store some information from a website in a cache on one’s computer. When you ask your browser to visit a website that you’ve used before, while the browser is waiting for the latest information from the website it will display the old data (the stuff that doesn’t change, that was retained from the last visit) from its cache, so that you don’t have to wait so long to view a web page.

52. Org. whose seal has a flower : EPA
The Environmental Protection Agency (EPA) was set up during the Nixon administration and began operation at the end of 1970.

53. Currency unit taken out of circulation in 1953 : RIN
The rin was a Japanese coin that was worth one thousandth of a yen. After WWII the Japanese yen was greatly devalued, so the rin became completely obsolete and was pulled from circulation in 1953.

54. Pay extension? : -OLA
Payola is the illegal practice of paying radio stations or disk jockeys to repeatedly play a particular piece of music. The impetus behind the crime is that the more often a song is played, the more likely it is to sell. The term “payola” comes from the words “pay” and “Victrola”, an RCA brand name for an early phonograph.