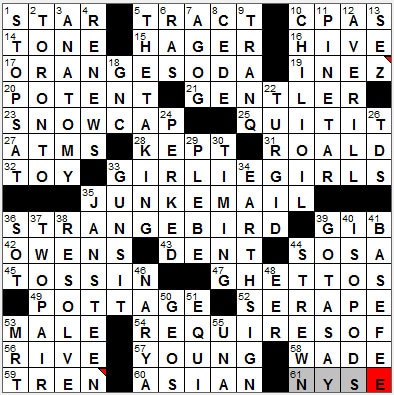 Today’s Wiki-est, Amazonian Googlies
Across
15. Jenna Bush ___, former first daughter : HAGER
Jenna Bush is one of the twin daughters of President George W. Bush. During her father’s 2004 presidential campaign, Jenna met and started dating Henry Hager who was a White House aide for Deputy chief of staff Karl Rove. The couple were married in 2008.

17. Crush, e.g. : ORANGE SODA
The Crush brand of soft drinks was invented in 1916, and originally was produced in an orange flavor as Ward’s Orange Crush.

21. Like George Bush’s promised nation : GENTLER
When then Vice President George H. W. Bush was running for president in 1988, he very much stood for a continuation of policies embraced by President Reagan. Bush also worked hard for win over moderate voters, by promising a “kinder and gentler nation”.

31. Explorer Amundsen : ROALD
The first men to reach the South Pole were in a party led by the Norwegian explorer Roald Amundsen, on December 14, 1911. Famously, a team led by Robert Falcon Scott reached the pole just 33 days later, only to find that they had been beaten in their quest. Scott and the whole of his team perished on the journey back out of the Antarctic.

32. Spirograph, e.g. : TOY
One of my favorite toys as a child was my Spirograph. A Spirograph is a geometric drawing device that uses cogs and gears with holes for pens and pencils. Movement of gears in combinations produces lovely geometric patterns on paper.

33. Lovers of all things Barbie, say : GIRLIE GIRLS
The famous Barbie doll was created by businesswoman Ruth Handler and first appeared on store shelves in 1959. Barbie was based on a German fashion doll called Bild Lilli that had been introduced four years earlier. Lilli had been a German cartoon character before taking on a three-dimensional form. Prior to the introduction of Bild Lilli and Barbie, children’s dolls were primarily representations of infants.

39. Noted rock site: Abbr. : GIB
Gibraltar is a small British territory on the Mediterranean coast just south of Spain. The British gained control of the area, which is just 2.6 square miles, during the War of the Spanish Succession in 1704. The ownership of Gibraltar is contested by the Spanish, but successive UK governments refuse to cede the territory as it is a major base for the Royal Navy. Gibraltar is right at the entrance to the Mediterranean from the Atlantic.

42. Buck for a tune? : OWENS
Buck Owens was a very successful country star, along with his backing band, the Buckaroos. Owens had 21 number one hits in the country music charts, but never had a record that successfully crossed over to the popular charts. From 1968 to 1986, Owens was the co-host of the TV show “Hee Haw”.

44. He was traded between Chicago teams in 1992 : SOSA
Sammy Sosa was right in the public eye in 1998 when he and Mark McGwire were vying to be the first to surpass the home run record held by Roger Maris. McGwire fell out of public favor due to stories of steroid abuse (stories which he later admitted were true) while Sosa fell of out favor when he was found to be using a corked bat in a 2003 game.

47. Some blight : GHETTOS
The first “ghetto” was an island in Venice that was used for confining Venetian Jews. The same island was used to store slag from a foundry, and “getto” was the Venetian word for “slag”. The term ghetto spread across Europe, at the beginning always associated with repressed Jewish populations. Ultimately it came to mean any urban area housing a minority group under economic and social pressure.

49. Thick vegetable soup : POTTAGE
A pottage is a thick soup or stew, and is the Old French word for a potted dish.

52. It’s a wrap : SERAPE
Serape is the English pronunciation and spelling of the Spanish word “zarape”. A zarape is like a Mexican poncho, a soft woolen blanket with a whole in the middle for the head. Most have colorful designs that use traditional Mayan motifs.

61. CNBC subj. : NYSE
The roots of the New York Stock Exchange (NYSE) go back to 1792 when a group of 24 stock brokers set up the New York Stock & Exchange Board. They did so in an agreement signed under a buttonwood tree outside 68 Wall Street. That document became known as the Buttonwood Agreement.

CNBC is a business news channel owned by NBC. Launched in 1989, up until 1991 CNBC was known as the Consumer News and Business Channel.

Down
2. City originally known as the Town of York : TORONTO
Beautiful Toronto is the largest city in Canada, and the fourth largest city in North America (after New York, Los Angeles, Chicago and Houston).

7. In a swivet : AGOG
“Swivet” is an American term of unknown origin, meaning “panic, fluster”.

9. Anxiolytic, e.g., for short : TRANQ
An “anxiolytic” is an antipanic drug, a minor tranquilizer.

10. Sichuan cooking ingredient : CHILI OIL
Sichuan (also Szechwan) is a province in southwest China. Sichuan is noted for its cuisine, which is hot and spicy as it uses plenty of garlic, chili peppers and the Sichuan peppercorn. A famous Szechwan dish in the US is Kung Pao chicken.


11. It may help you get a grip : PINE TAR
Pine tar is applied to the handles of baseball bats as it is a sticky substance and improves the batter’s grip. In a 1983 game, the Yankees manager Billy Martin protested a home run hit by George Brett of the Royals because the pine tar on his bat extended beyond the regulation 18 inches. The home run was later allowed as it was determined that the 18-inch rule was in place for economic reasons, and had nothing to do with competitive advantage. If pine tar gets on a baseball it renders it unusable for play, and baseballs cost money!

12. Earl in the Baseball Hall of Fame : AVERILL
Earl Averill was a Major League Baseball center fielder who played mainly in the 1930s.

18. Health products co. : GNC
General Nutrition Centers (GNC) is a retailer of health and nutrition supplements based in Pittsburgh, Pennsylvania.

26. Cardinal pts.? : TDS
The Arizona Cardinals were founded in 1898 as the Chicago Cardinals. That makes the Cardinals the oldest continuously-run professional football team in the whole country.

29. Object of some hazing : PLEBE
Plebe is a slang term for a freshman in the US military and naval academies. Plebe is probably short for “plebeian”, the name given to someone of the common class in Ancient Rome (as opposed to a Patrician). “Pleb” is a shortened version of plebeian, and is a term used outside of the military schools.

34. Taurus, for one : EARTH SIGN
Each of the twelve astrological signs is associated with one of the classical elements:

35. Dutch Golden Age painter : JAN STEEN
Jan Steen was a Dutch painter active in the Dutch Golden Age, the 17th century. Steen’s most famous work is probably “The Feast of Saint Nicholas”, which you can see at the Rijksmuseum in Amsterdam.

36. One who’s usually gone : SOT
Our word “sot” comes from the Old English “sott”, meaning a fool. The word “sot” started to be associated with alcohol and not just foolery in the late 1500s.

40. Wood lice and pill bugs : ISOPODS
Isopods are small crustaceans (meaning they have exoskeletons), with seven pairs of legs. Examples would be woodlice and pill bugs. The name “isopod” comes from the Greek “iso” (same) and “pod” (foot).

50. Storms and others : GEOS
Geos were small vehicles manufactured by General Motors mainly in the nineties. Geos were designed to compete head-to-head with the small imports that were gaining market share at the time in the US. Some Geo models that you might remember are the Metro, the Prizm and the Storm. The cars were actually built as joint-ventures with Japanese manufacturers. The Prizm was a GM/Toyota project, the Metro was GM/Suzuki, and the Storm was GM/Isuzu.

53. Star of the motivational video “Be Somebody … or Be Somebody’s Fool” : MR T
Mr. T’s real name is Laurence Tureaud. Mr. T is famous for many things, including the wearing of excessive amounts of jewelry. He started this habit when he was working as a bouncer, wearing jewelry items that had been left behind by customers at a nightclub so that the items might be recognized and claimed. It was also as a bouncer that he adopted the name Mr. T. His catchphrase comes from the movie “Rocky III”. In the film, before he goes up against Rocky Balboa, Mr. T says, “No, I don’t hate Balboa, but I pity the fool”. He parlayed that line into quite a bit of success. He had a reality TV show called “I Pity the Fool”, and produced a motivational video called “Be Somebody … or Be Somebody’s Fool!”.

55. “Por ___ Cabeza” (tango standard) : UNA
“Por una cabeza” is one of the most famous Argentine tangos, oft-featured in memorable scenes in big Hollywood movies. You might recall tangos in 1992’s “Scent of a Woman” or 1994’s “True Lies”, for example, both of which were danced to “Por una cabeza”. The title of the song translates to “by a head”. The “by a head” in this context is the distance by which a horse might win a race. The lyrics tell of a man who compares his addiction to gambling on horses to his attraction to women.