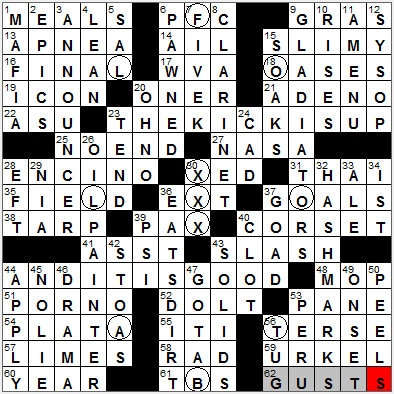 23A. With 44-Across, common broadcasting phrase related to this puzzle’s outer circled letters : THE KICK IS UP
44A. See 23-Across : AND IT IS GOOD

9. Mardi ___ : GRAS
“Mardi Gras” translates from French as “Fat Tuesday”, and gets its name from the practice of eating rich foods on the eve of the fasting season known as Lent.

13. It might keep you up at night : APNEA
Sleep apnea can be caused by an obstruction in the airways, possibly due to obesity or enlarged tonsils.

17. Morgantown’s locale: Abbr. : WVA
The city of Morgantown in northern West Virginia is named for Zackquill Morgan who moved into the area in 1767. Zackquill’s father’s name was Morgan Morgan, so I guess the family liked the Morgan name …

19. John Lennon, e.g. : ICON
John Lennon was shot and killed by Mark David Chapman in New York City in December 1980. Chapman’s lawyers wanted him to file an insanity plea but instead he chose to plead guilty and was sentenced to life in prison, with eligibility for parole after 20 years. Chapman has been denied parole every two years since 2000 and is still an inmate of Attica State Prison.

20. Dandy : ONER
Something that is a dandy or a oner is remarkable or outstanding.

21. Glandular prefix : ADENO-
Adeno- is a prefix referring to a gland, so for example “adenitis” is inflammation of a gland. “Adeno-” comes from the Greek word for an acorn, presumably descriptive of the shape of some glands.

22. Sun Devil Stadium’s sch. : ASU
The athletic teams of Arizona State University (ASU) used to be known as the Normals, then the Bulldogs, and since 1946 they’ve been called the Sun Devils.

27. Curiosity’s launcher : NASA
NASA’s Curiosity rover is the fourth in a series of unmanned surface rovers that NASA has sent to Mars. Previous rovers are the Sojourner rover (1997), Spirit rover (2004-2010) and Opportunity rover (2004-present). Curiosity rover was launched in November of 2011, and landed on Mars in August 2012 after having travelled 350 million miles. After such a long journey, Curiosity landed just 1½ miles from its target touchdown spot.

28. Los Angeles district : ENCINO
Encino is a district in the City of Los Angeles on the north slope of the Santa Monica Mountains. The area takes its name from a historic parcel of land called Rancho Los Encinos (Ranch of the Evergreens).

31. Bangkok native : THAI
Bangkok is the capital city of Thailand. The exact etymology of the name “Bangkok” seems unclear, although “bang” is a Thai word meaning “a village situated on a stream”.

38. Rain delay sight : TARP
Originally, tarpaulins were made from canvas covered in tar that rendered the material waterproof. The word “tarpaulin” comes from “tar” and “palling”, with “pall” meaning “heavy cloth covering”.

43. One of two on a short date? : SLASH
I think that of all the things I had to “unlearn” when I moved to the US, writing the date was the hardest to adopt consistently. In Ireland we use a DD/MM/YYYY format, whereas the MM/DD/YYYY format is used here in the US, and in part of Canada I hear.

56. Adhering to Strunk and White’s advice “Omit needless words” : TERSE
William Strunk, Jr. was co-author of the first editions of “The Elements of Style” back in 1918 (usually referred to as “Strunk & White”). Strunk’s fellow-author was Elwyn Brooks (E. B.) White, the creator of the children’s stories “Charlotte’s Web” and “Stuart Little”.

57. Mojito garnishes : LIMES
A Mojito is a Cuban cocktail, although the exact origins appear to be unclear, as does the derivation of the name. Want one? Put 4 mint leaves in a glass, and add the juice of half a lime and a teaspoon of powdered sugar. Muddle the ingredients, smashing them together with a muddler or a spoon. Add some crushed ice, two ounces of white rum and stir. Top with a couple of ounces of club soda, and garnish with a sprig of mint. Cheers!

58. X-ray unit : RAD
A rad is a unit used to measure radiation levels that is largely obsolete now. The rad has been superseded by the rem.

X-rays were first studied comprehensively by the German physicist Wilhelm Röntgen (also “Roentgen”), and it was he who gave the name “X-rays” to this particular type of radiation. Paradoxically, in Röntgen’s native language of German, X-rays are routinely referred to as “Röntgen rays”. In 1901 Röntgen won the first Nobel Prize in Physics that was ever awarded, recognition for his work on X-rays.

59. “Family Matters” role : URKEL
Steve Urkel is a character on the TV show “Family Matters” that aired in the late eighties and nineties. The Urkel character was the archetypal “geek”, played by Jaleel White. Urkel was originally written into the show’s storyline for just one episode, but before long Urkel was the show’s most popular recurring character.

60. Alumni grouping : YEAR
An “alumnus” (plural … alumni) is a graduate or former student of a school or college. The female form is “alumna” (plural … alumnae). The term comes into English from Latin, in which alumnus means foster-son or pupil.

Down
1. Omertà organization : MAFIA
Omertà is a code of honor in southern Italian society. It has been adopted by the Mafia to mean a code of silence designed to prevent a Mafioso from informing to the authorities. For example, the famous Joe Valachi was someone who broke the code of silence in 1963, informing on the New York Mafia. Valachi’s story was told in the movie “The Valachi Papers”, with Charles Bronson playing the lead.

2. Works inspired by Calliope, e.g. : EPICS
In Greek mythology, the muses are the goddesses who inspire the creation of literature and the arts. The number of muses is a subject of debate at times, but the most popular view is that there are nine:

5. Mineo of film : SAL
Sal Mineo’s most famous role was that of John “Plate” Crawford, the kid who was in awe of the James Dean character in “Rebel Without a Cause”. Sadly, Mineo was murdered in 1976 when he was just 37 years old. He was attacked in the alley behind his Los Angeles apartment and stabbed through the heart. When an arrest was made it was discovered that the murderer had no idea that his victim was a celebrity and was just intent on robbery.

6. In hock : PAWNED
The term “in hock” is an American invention. Back in the mid-19th century “in hock” meant both “in debt” and “in prison”. The work “hock” came from the Dutch “hok” meaning “jail”.

Honcho is a slang term for a leader or manager. The term comes to us from Japanese, where a “hancho” is a squad (han) leader (cho).

24. Probably not Mr. Right : CAD
Our word “cad”, meaning “a person lacking in finer feelings”, is a shortening of the word “cadet”. Cad was first used for a servant, and then students at British universities used “cad” as a name for a boy from the local town. “Cad” took on its current meaning in the 1830s.

26. Manet or Monet : OIL PAINTER
The French painter Edouard Manet is responsible for many great works including “Le déjeuner sur l’herbe”, a work much praised by novelist Emile Zola.

28. Pond denizen : EFT
Newts wouldn’t be my favorite animals. They are found all over the world living on land or in water depending on the species, but always associated with water even if it is only for breeding. Newts metamorphose through three distinct developmental stages during their lives. They start off as larvae in water, fertilized eggs that often cling to aquatic plants unlike the eggs of frogs and toads which float freely. The eggs hatch into tadpoles, the first developmental form of the newt. After living some months as tadpoles swimming around in the water, they undergo another metamorphosis, sprouting legs and replacing their external gills with lungs. At this juvenile stage they are known as efts, and leave the water to live on land. A more gradual transition takes place then, as the eft takes on the lizard-like appearance of the adult newt.

29. Vardalos of “My Big Fat Greek Wedding” : NIA
Not only was the delightful Nia Vardalos the star of the 2002 hit movie “My Big Fat Greek Wedding”, she also wrote the screenplay. The film never made it to number one at the box office, but it still pulled in more money than any other movie in history that didn’t make it to number one. That record I think reflects the fact that the film wasn’t a blockbuster but rather a so-called “sleeper hit”, a movie that people went to see based on referrals from friends. The big fat mistake came when a spin-off TV show was launched called “My Big Fat Greek Life”. It ran for only 7 episodes.

32. They appear at one-yard intervals : HASH MARKS
I known nothing about American football, so I had to look up the definition of hash marks in Wikipedia. There I read that each mark is spaced every 5 yards, and not every one yard as the clue says. No doubt someone will email me and enlighten me …

33. The “A” in IPA : ALE
India Pale Ale is a style of beer that comes from England. The beer was originally intended for transportation from England to India, hence the name.

42. Greek walkways : STOAS
A stoa was a covered walkway in Ancient Greece. A stoa usually consisted of columns lining the side of a building or buildings, with another row of columns defining the other side of the walkway. The columns supported a roof. Often stoae would surround marketplaces in large cities.

43. Pool side : SOLIDS
One side (player) in a game of pool uses the “solid” balls, the other the “stripes”.

The more correct name for the game of pool is pocket billiards. The name “pool” came after pocket billiards became a common feature in “pool halls”, places where gamblers “pooled” their money to bet on horse races.

46. Miller product : DRAMA
Arthur Miller was a remarkable playwright, best known for his plays “Death of a Salesman” and “The Crucible”. Famously, Arthur Miller left his first wife to marry Marilyn Monroe in 1956. The two divorced five years later, just over a year before Monroe died of an apparent drug overdose.

53. Country mentioned in Sinatra’s “Come Fly With Me” : PERU
“Come Fly With Me” is a song written in 1957 by Jimmy Van Heusen and Sammy Cahn. The songwriting duo wrote “Come Fly With Me” specifically for Frank Sinatra, and he used it as the title track of a 1958 album. The lyrics of the song take us to such wonderful locales as Bombay, Peru and Acapulco Bay.