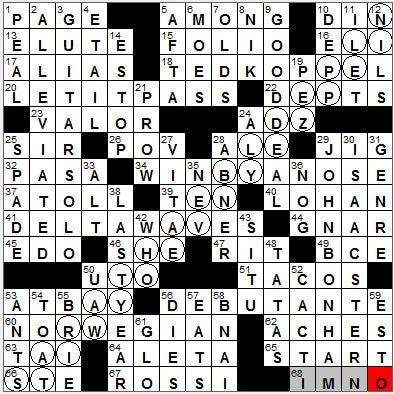 CROSSWORD SETTER: Andrew Reynolds
THEME: Stairway to Heaven by Led Zeppelin … there is a “staircase” of circled letters running diagonally up the grid. When read from bottom-to-top, the circled letters spell out “STAIRWAY TO HEAVEN” BY LED ZEPPELIN, a reference to the iconic 1971 hit by the English rock band. As an added bonus, there’s a mention of two of the group’s founding members:

Today’s Wiki-est, Amazonian Googlies
Across
1. Rock legend Jimmy : PAGE
English guitarist Jimmy Page made a name for himself as a member of the Yardbirds in the late sixties. As the Yardbirds fell apart, Page went on to form a new band, the more enduring Led Zeppelin.

10. Ruckus : DIN
The word “ruckus” is used to mean a commotion, and has been around since the late 1800s. “Ruckus” is possibly a melding of the words “ruction” and “rumpus”.

13. Extract with a solvent : ELUTE
Elution is a technique that I used to employ many years ago when I worked as a biochemist. Elution is the extraction of one material from a mixture by washing it out with a solvent. Often this is done with the help of solid substance that adsorbs one material in the mixture so that the second, unadsorbed material can easily be dissolved and collected.

16. One of the Manning brothers : ELI
Even I know that Eli Manning and his older brother Peyton are both quarterbacks!

18. Longtime “Nightline” host : TED KOPPEL
The broadcast journalist Ted Koppel is most associated with his long run as anchor for the “Nightline” program on ABC. Koppel was actually born in England, to a Jewish family that had fled from Germany. He emigrated with his family to the US when he was 13 years old. Koppel is great friends with former Secretary of State Henry Kissinger who was a frequent guest on his television show.

24. Woodworking tool : ADZ
An adze (also adz) is similar to an axe, but different in that the blade of an adze is set at right angles to the tool’s shaft. An axe’s blade is set in line with the shaft.

25. Lancelot’s title : SIR
Sir Lancelot was one of the knights in the legend of King Arthur and the Round Table. Lancelot was the most trusted of Arthur’s knights when it came to battle, but off the field he had a poorer reputation. Famously, Lancelot had an affair with Guinevere, Arthur’s wife.

26. Long-running PBS film showcase : POV
“POV” is a PBS television series that showcases independent documentary films. “POV” has been on the air since 1988.

37. Coral island : ATOLL
An atoll is a coral island that is shaped in a ring and enclosing a lagoon. There is still some debate as to how an atoll forms, but a theory proposed by Charles Darwin while on his famous voyage aboard HMS Beagle still holds sway. Basically an atoll was once a volcanic island that had subsided and fallen into the sea. The coastline of the island is home to coral growth which persists even as the island continues to subside internal to the circling coral reef.

39. Number of prime ministers on Downing Street? : TEN
10 Downing Street is one of the most famous street addresses in the world and is the official London residence of the British Prime Minister. Although it may not look it on television, it’s a spacious pad, actually a larger house made by combining three older houses back in the 1700s. Although Number 10 has over one hundred rooms, they are mostly offices and reception rooms and the actual residence itself is quite modest. It was so modest that when Tony Blair came to power he opted to move himself and his family into the more spacious residence next door at Number 11, an apartment traditionally reserved for the Chancellor of the Exchequer (the UK equivalent of the Secretary of the Treasury). The succeeding Prime Minister, David Cameron, seemed to like the idea, because he now lives in Number 11 as well.

40. Lindsay of “Mean Girls” : LOHAN
I think that actress Lindsay Lohan’s big break was in the Disney remake of “The Parent Trap” in 1998. I’ve really only enjoyed one of Lohan’s films though, “Freaky Friday” from 2003 in which she stars alongside the fabulous Jamie Lee Curtis.

45. Old name for Tokyo : EDO
Edo is the former name of the Japanese city of Tokyo. Edo was the seat of the Tokugawa shogunate, a feudal regime that ruled from 1603 until 1868. The shogun lived in the magnificent Edo castle. Some parts of the original castle remain and today’s Tokyo Imperial Palace, the residence of the Emperor of Japan, was built on its grounds.

47. Gradually slowing, in mus. : RIT
Rit. (or sometimes ritard.) is the abbreviation for ritardando, the musical direction to slow down the tempo.

49. Letters after a long-ago date : BCE
The designations Anno Domini (AD, “year of Our Lord”) and Before Christ (BC) are found in the Julian and Gregorian calendars. The dividing point between AD and BC is the year of the conception of Jesus, with AD 1 following 1 BC without a year “0” in between. The AD/BC scheme dates back to AD 525, and gained wide acceptance soon after AD 800. Nowadays a modified version has become popular, with CE (Common/Christian Era) used to replace AD, and BCE (Before the Common/Christian Era) used to replace BC.

“Cotillion” is an American term that we’ve been using since about 1900 for a formal ball. In France a cotillion was a type of dance, with the term deriving from an Old French word for a petticoat. I guess the cotillion dance was one in which the lady would flash her petticoats as she did a twirl!

60. Henrik Ibsen, for one : NORWEGIAN
Henrik Ibsen was a Norwegian playwright, considered by many to be the greatest playwright since William Shakespeare. Ibsen was famous for shocking his audiences by exploring subjects that offended the sensibilities of the day (the late 1800s).

64. Prince Valiant’s wife : ALETA
Aleta is the the wife of Prince Valiant in the long-running comic strip. Edward, Duke of Windsor, called the “Prince Valiant” comic strip the “greatest contribution to English Literature in the past one hundred years”. I’m not so sure …

66. Sault ___ Marie : STE
In the summer of 2010 I spent a very interesting afternoon watching ships make their way through the Soo Locks and Soo Canal between Lake Superior and the lower Great lakes. The name “Soo” comes from the US and Canadian cities on either side of the locks, both called Sault Ste. Marie.

67. Martini’s partner in wines : ROSSI
The company that is today known as Martini & Rossi was started in the mid-1800s in Italy, by Alessandro Martini and Luigi Rossi (and a third partner who sold out years later). From day one it was focused on bottling the fortified wine known as vermouth. Nowadays, the company is also famous for its sparkling wines, and its sponsorship of Grand Prix racing teams. And yes, the famous cocktail is probably named for Mr. Martini.

Down
4. Amazon transactions, e.g. : ETAIL
“Etail” is the term used these days for online shopping. Etail is often compared to regular shopping in the “real world” by juxtaposing it with a “brick and mortar” store.

The Old Spice brand of grooming products was introduced in 1937, originally intended for a female clientele. The first male product hit the shelves in 1938, and of course today Old Spice is completely focused on products for men.

6. Homer’s hangout on “The Simpsons” : MOE’S
Moe Szyslak is the surly bartender and owner of Moe’s Tavern in “The Simpsons” animated TV show. I don’t really care for “The Simpsons”, but Hank Azaria who supplies the voice for the Moe character … him I like.

10. Johnny who played Sweeney Todd : DEPP
Johnny Depp had his big break as an actor on television, in the eighties television show “21 Jump Street”. Depp’s first film success came when he played the title role in 1990’s “Edward Scissorhands”. He has twice been named Sexiest Man Alive by “People” magazine.

11. Abba’s “___ the Music Speak” : I LET
I am an unapologetic fan of ABBA’s music. ABBA was of course the Swedish group who topped the charts in the seventies and eighties. The name ABBA is an acronym formed from the first letters of the given names of each of the band members, namely: Agnetha, Benny, Bjorn and Anni-Frid.

12. Rocker Lofgren : NILS
The musician Nils Lofgren was a member of Bruce Springsteen’s E Street Band for over 25 years.

14. Legally bar : ESTOP
The legal term “estop” means to block or stop by using some legal device. The word “estop” comes from Old French, in which “estopper” means “to stop up” or “to impede”.

19. Candy with a collectible dispenser : PEZ
PEZ is an Austrian brand name for a particular candy sold in a mechanical dispenser. The name PEZ comes from the first, middle and last letters of “Pfefferminz”, the German word for “peppermint”.

24. Prince ___ Khan : ALY
Aly Khan was the familiar name used by the media when referring to Prince Ali Solomone Aga Khan, the Pakistani ambassador to the UN from 1958 to 1960. Khan made it into the papers a lot as he was the third husband of actress Rita Hayworth.

28. “Li’l” comics fellow : ABNER
“Li’l Abner” was created and drawn by Al Capp for over 43 years starting in 1934. Al Capp stopped producing the strip in 1977, largely due to illness (he died from emphysema two years later). As the strip finished up, he went so far as to apologize to his long-standing fans, saying that he should have stopped 3-4 years earlier as he felt that the quality of his work had gone down in those latter years.

29. Bandmate of 1-Across : JOHN BONHAM
Jon Bonham was the much-admired drummer of the English band Led Zeppelin. In 2011, Bonham was voted by readers of “Rolling Stone” magazine as the best drummer of all time. Bonham died in 1980 at the age of 32 after having choked on his own vomit. In the 24 hours prior to his death, the coroner determined that Bonham had consumed 40 shots of vodka.

30. Polish-born violin master : ISAAC STERN
Isaac Stern is Ukrainian-born, but moved with his family to San Francisco at a very young age. A wonderful violin virtuoso …

35. One side of the Hoover Dam: Abbr. : NEV
When the magnificent Hoover Dam was completed in 1936, it was the largest hydroelectric plant in the world as well as being the world’s largest concrete structure. The dam is named after Herbert Hoover for his role in having the dam built when he was Secretary of Commerce and his later support as US President. When the dam was finally put into service in 1936, the project was two years ahead of schedule. Those were the days …

36. Eggy drink : NOG
It’s not really clear where the term “nog” comes from although it might derive from the word “noggin”, which was originally a small wooden cup that was long associated with alcoholic drinks.

42. Sci-fi’s “Doctor ___” : WHO
The iconic science-fiction television show “Doctor Who” was first aired in 1963, and relaunched in 2005 by the BBC. The relaunched series is produced in-house by the BBC in Cardiff in Wales, and this is the setting of the successful “Doctor Who” spin-off called “Torchwood”. The new show is about the Cardiff branch of the Torchwood Institute which investigates incidents involving extraterrestrials.

48. Goodbyes : TATAS
An Englishman might say “tata” or “cheerio” instead of “goodbye”. Well, supposedly so!

50. Motor City org. : UAW
The United Auto Workers (UAW) was founded to represent workers in auto plants in the Detroit area in 1935. Nowadays its membership extends into the aerospace, agriculture and other industries.

55. Spreadable cheese : BRIE
Brie is a soft cheese, named after the French province of Brie where it originated.

57. Vittles : EATS
“Victuals” is a term for food that is fit for consumption. We tend to pronounce “victuals” as “vittles”, and we use the term “vittles” and “victuals” interchangeably.