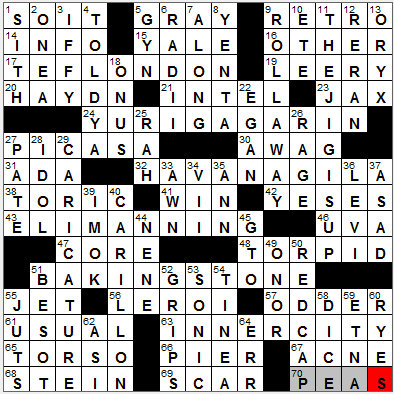 CROSSWORD SETTER: Ian Livengood
THEME: INNER CITY … each of the theme answers contains the name of a capital city:


Today’s Wiki-est, Amazonian Googlies
Across
15. Connecticut Ivy : YALE
The term “Ivy League” originally defined an athletic conference, but now it is used to describe a group of schools of higher education that are associated with both a long tradition and academic excellence. The eight Ivy League Schools are: Brown, Columbia, Cornell, Dartmouth, Harvard, Princeton, the University of Pennsylvania, and Yale.

John Gotti was the boss of the Gambino crime family from 1985. Gotti was known as the Teflon Don and took over leadership of the family from Paul Castellano when he was gunned down, allegedly on Gotti’s orders. Gotti remained head of the New York family until he was sentenced to life in prison in 1992. Gotti died of throat cancer after ten years behind bars.

24. First human in space : YU(RI GA)GARIN
The Russian cosmonaut Yuri Gagarin became the first man in space when his spacecraft, Vostok I, made one orbit of the Earth in 1961. Sadly, Gagarin died only seven years later in a plane crash.

27. Google image-organizing app : PICASA
I use Picasa to create the image of the crossword grid each evening. All those images that you see are stored in Picasa Web Albums, Picasa’s online image storage site.

31. Oklahoma town : ADA
Back in 1889, Jeff Reed was hired to carry the mail between the two communities of Stonewall and Center in what was then called the Indian Territory. Reed had moved to the area from Texas and he bought some land in between the two limits of his mail route and built himself a log cabin. Pretty soon other settlers built homes nearby and in 1891 the settlement got its own post office. As postman, Reed got to name the new post office and he called it Ada, after his oldest daughter. Ada is now a county seat and has over 17,000 residents. One of the sons of the city of Ada was the televangelist Oral Roberts.

32. Folk song played at Jewish weddings : (HAVA NA)GILA
“Hava Nagila” is a Hebrew folk song, with the title translating into “Let Us Rejoice”. The melody is from a Ukranian folk song. The words to “Hava Nagila” were composed in 1918 to celebrate the British victory in Palestine during WWI.

38. Life Saver-shaped : TORIC
Life Savers were introduced in 1912. The candy was created by Clarence Crane who contracted a pill manufacturer to press his formulation for mints into shape. The pill manufacturer found that the pieces of candy were produced more easily if a hole was stamped in the middle. The Life Saver name was chosen as the candy had the same shape as lifebuoys.

43. Giant who was the Super Bowl XLVI M.V.P. : E(LI MA)NNING
Even I know that Eli Manning and his older brother Peyton are both quarterbacks!

46. Thos. Jefferson founded it : UVA
The University of Virginia (UVA) was of course founded by Thomas Jefferson, who sat on the original Board of Visitors with former US Presidents James Madison and James Monroe. In fact, the original UVA campus was built on land that was once a farm belonging to President Monroe.

65. Sculptor’s subject : TORSO
“Torso” (plural “torsi”) is an Italian word meaning the “trunk of a statue”, a word that we imported into English.

68. Oktoberfest container : STEIN
Oktoberfest is a 16-day beer festival in Munich that actually starts in September. About six million people attend every year, making it the largest fair in the world. I’ve been there twice, and it really is a great party …

69. Memento from Zorro : SCAR
The character Zorro was created by Johnston McCulley in 1919 for a series of stories and pulp fiction. The name “Zorro” is the secret identity of a Spanish colonial nobleman called Don Diego de la Vega. “Zorro” is Spanish for “fox”.

The Sith are characters in “Star Wars” that use the “dark side” of “the Force”, and as such are the antithesis of the Jedi Knights. The last of the six “Star Wars” movies made is called “Star Wars Episode III: Revenge of the Sith”.

2. Eminently draftable : ONE-A
The US government maintains information on all males who are potentially subject to military conscription using what is called the Selective Service System (SSS). In the event that a draft is held, men registered would be classified into groups to determine eligibility for service. Class 1-A registrants are those available for unrestricted military service. Other classes are 1-A-O (conscientious objectors available for noncombatant service), 4-A (registrants who have completed military service) and 4-D (ministers of religion).

10. Juillet season : ETE
One might spend the summer (été) under the sun (le soleil) in France, and “juillet” is French for July (note that the name of months aren’t capitalized in French).

11. “Caught you, at long last!” : THE JIG IS UP
Back in Elizabethan times, a “jig” was a trick or game. So, the expression “the jig is up” has for some time meant “the trick or game is exposed”.

13. Large African antelope : ORYX
The oryx is a large antelope species, mainly found in Africa but also in the Arabian Peninsula. One species was introduced by man into the White Sands Missile Range. As a result, the oryx is now considered an invasive species in the neighboring White Sands National Monument.

22. Richard of “Love Me Tender” : EGAN
Richard Egan was an actor from San Francisco. One of Egan’s more famous roles was playing Elvis Presley’s older brother in “Love Me Tender”. Rod Serling eventually chose to narrate his epic “The Twilight Zone” series himself, but his first choice for narrator had been Richard Egan. It was perhaps lucky that Egan couldn’t do the “The Twilight Zone” gig due to other contractual obligations, as Serling’s commentary added so much to the show.

27. Spread on crackers : PATE
Pâté is a rich spreadable paste made up of a mixture of ground meat and fat, to which various vegetables, herbs and spices may be added. The most famous version is pâté de fois gras, made from the fattened livers of geese (“fois gras” means “fat liver” in French).

29. Many an illustration in The Economist : CARICATURE
“The Economist” is a British publication, dating back to 1843. “The Economist” is read by a lot of people on this side of the Atlantic and North America accounts for half of the magazine’s sales revenue.

33. Plant bristle : AWN
Awns are hair or bristle-like structures found in numerous species of plants. In some species, like barley, the awns can contain photosynthetic tissue.

35. Curry who formerly co-hosted “Today” : ANN
The television journalist Ann Curry is perhaps best known for the time she spent as co-host on NBC’s “Today” show. NBC executives asked Curry to resign from the “Today” show because ratings were low. I just read online that Curry was also pushed out because of the way she insisted on dressing and because she refused to dye her gray hair. I hope that isn’t true …

36. Italian writer Primo : LEVI
Primo Levi was an Italian chemist and writer. His best known written work is “If This Is a Man”, a biographical account of the year he spent in Auschwitz. He was one of 650 Jews transported to the camp in 1944, and was one of only 20 who survived imprisonment.

44. Spanish baby : NENE
“Nene” is the Spanish word for a male baby.

50. Station aide : REDCAP
“Redcap” is a term used for a railroad station porter here in North America. That term of course comes from the fact that redcaps wear red caps!

52. Movie set aides : GRIPS
On a film set, grips are the lighting and rigging technicians, with the key grip being the name given to the leader of the whole team. The first “grips” were technicians that worked in the circus in its early days. The name “grip” possibly comes from the bags called grips. in which the technicians carried their tools.

53. Title character in a Sega game : SONIC
Sega is a Japanese video game company headquartered in Tokyo. Sega actually started out 1940 in the US as Standard Games, located in Honolulu. The owners moved the operation to Tokyo in 1951 and renamed the company to Service Games. The name “Sega” is a combination of the first two letters of the words “Se-rvice” and “Ga-mes”.

54. Skin woe : TINEA
The skin condition known as tinea is more usually referred to as ringworm.

58. Yahtzee equipment : DICE
The dice game of Yahtzee was introduced in 1956, a variant of earlier dice games, especially the game “Yacht” (which even has a similar name). Yahtzee is required playing in our house at holidays.

59. Italian hot spot : ETNA
Mt. Etna is the largest of three active volcanoes in Italy. Mt Etna is about 2 1/2 times the height of its equally famous sister, Mt. Vesuvius.

60. Some deli loaves : RYES
The word “delicatessen” (or “deli” for short) came into English from the German “Delikatessen” meaning “delicious (delikat-) to eat (essen)”.