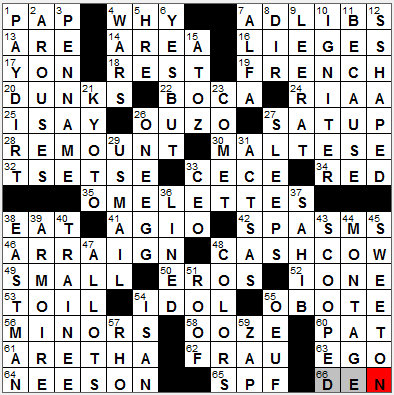 CROSSWORD SETTER: Matt Ginsberg
THEME: Q&A … the theme answers give us a question, and a humorous answer:

Today’s Wiki-est, Amazonian Googlies
Across
1. Blather : PAP
One meaning of “pap” is soft or semi-liquid food for babies and small children. “Pap” comes into English via French, from the Latin word used by children for “food”. In the 1500s, “pap” also came to mean “an over-simplified” idea. This gives us a usage that’s common today, describing literature or perhaps TV programming that lacks real value or substance. Hands up those who think there’s a lot of pap out there, especially on television …

7. Ignores the teleprompter : AD-LIBS
“Ad libitum” is a Latin phrase meaning “at one’s pleasure”. In common usage the phrase is usually shortened to “ad lib”. On the stage the concept of an “ad lib” is very familiar. For example, an actor may substitute his or her own words for forgotten lines using an ad lib, or a director may instruct an actor to use his or her own words at a particular point in a performance to promote a sense of spontaneity.

14. 109 acres, for Vatican City : AREA
Vatican City is a sovereign city-state that is walled off within the city of Rome. Vatican City is about 110 acres in area, and so is the smallest independent state in the world. With about 800 residents, it is also the smallest state in terms of population. Although the Holy See dates back to early Christianity, Vatican City only came into being in 1929. At that time, Prime Minister Benito Mussolini signed a treaty with the Holy See on behalf of the Kingdom of Italy that established the city-state.

16. Lords … or subjects : LIEGES
A liege was a feudal lord, one to whom service or allegiance was owed under feudal law. “Liege” was also the term used for one who owed allegiance or service to the lord. Very confusing …

22. Florida city, informally : BOCA
The name of the city of Boca Raton in Florida translates from Spanish as “Mouse Mouth”. There doesn’t seem to be a definitive etymology of the name but one plausible explanation is a nautical one. “Boca”, as well as meaning “mouth” can mean “inlet”. “Ratón”, as well as meaning “mouse” was also used to describe rocks that chewed away at a ship’s anchor cable. So possibly Boca Raton was named for a rocky inlet.

24. Fighter of pirates, in brief : RIAA
The Recording Industry of America (RIAA) represents music distributors. It is the RIAA that certifies records that have gone gold and platinum i.e. reached fixed sales thresholds. It’s also the RIAA that goes after individuals who share music illegally online.

26. “My Big Fat Greek Wedding” libation : OUZO
Ouzo is an aperitif from Greece that is colorless and flavored with anise. Ouzo is similar to pastis from France, and also has a flavor like sambuca from Italy.

Not only was the delightful Nia Vardalos the star of the 2002 hit movie “My Big Fat Greek Wedding”, she also wrote the screenplay. The film never made it to number one at the box office, but it still pulled in more money than any other movie in history that didn’t make it to number one. That record I think reflects the fact that the film wasn’t a blockbuster but rather a so-called “sleeper hit”, a movie that people went to see based on referrals from friends. The big fat mistake came when a spin-off TV show was launched called “My Big Fat Greek Life”. It ran for only 7 episodes.

Tsetse flies live on the blood of vertebrate mammals. The name “tsetse” comes from Tswana, a language of southern Africa, and translates simply as “fly”. Tsetse flies are famous for being carriers of the disease known as “sleeping sickness”. The disease is caused by a parasite which is passed on to humans when the tsetse fly bites into human skin tissue. If one considers all the diseases transmitted by the insect, then the tsetse fly is responsible for a staggering quarter of a million deaths each year.

41. Currency exchange premium : AGIO
The term “agio” derives from the Italian “aggio” meaning “exchange rate, discount, premium”. Most often, the agio is defined as the difference between the actual exchange rate and the nominal exchange rate for two currencies. That difference is mainly made up of the service fee for making the exchange.

46. Accuse formally : ARRAIGN
In the law, to arraign someone is to call a person before a court to answer charges that have been brought.

50. Early wielder of a bow and arrow : EROS
As always seems to be the case with Greek gods, Eros and Aphrodite have overlapping spheres of influence. Aphrodite was the goddess of love between a man and a woman, and Eros was the god who stirred the passions of the male.

52. One of the Nereids in Greek myth : IONE
In Greek mythology, Nereus and Doris had fifty daughters, and these were called the sea nymphs or nereids. The nereids often hung around with Poseidon and were generally very helpful creatures to sailors in distress. Mainly they were to be found in the Aegean, where they lived with their father in a cave in the deep. Some of the more notable names of the nereids were: Agave, Asia, Calypso, Doris, Erato, Eunice and Ione.

Taylor Hicks is the singer who won the fifth season of “American Idol”. Talk show host Jay Leno likes to refer to Hicks as “his son”, because the two have full heads of gray hair. Hicks started to go gray when he was just 14-years-old.

55. Uganda’s second P.M. : OBOTE
Milton Obote was the political leader who led Uganda to independence from British colonial rule in 1962. Oboto served as Prime Minister and then President of the country, until he was overthrown by Idi Amin in 1971.

61. Franklin with a cameo role in “The Blues Brothers” : ARETHA
I think Aretha Franklin, the Queen of Soul, had a tough life. Franklin had her first son when she was 13-years-old, and her second at 15. In 2008, “Rolling Stone” magazine ranked her as number one in their list of the greatest singers of all time.

The Blues Brothers is a blues band created in 1978 for a Saturday Night Live sketch. The original Blues Brothers were Dan Aykroyd (Elwood Blues) and John Belushi (“Joliet” Jake Blues). The sketch was parlayed into a movie called “The Blues Brothers” that was released in 1980.

64. “Battleship” co-star, 2012 : NEESON
Irish actor Liam Neeson got his big break when he played Oskar Schindler in the Spielberg epic, “Schindler’s List”. Neeson was in the news a few years ago when he lost his wife, actress Natasha Richardson, in a tragic skiing accident in 2009.

“Battleship” is a 2012 sci-fi/action movie starring Liam Neeson and Taylor Kitsch as US Navy officers who have to take on aliens invading the Earth.

65. Lotion abbr. : SPF
In theory, the sun protection factor (SPF) is a calibrated measure of the effectiveness of a sunscreen in protecting the skin from harmful UV rays. The idea is that if you wear a lotion with say SPF 20, then it will take 20 times as much UV radiation to cause the skin to burn if using lotion, than without it. I say just stay out of the sun …

Down
1. Good thing to hit : PAY DIRT
To hit pay dirt is to succeed, make a profit. The expression comes from the mining industry, when hitting pay dirt was finding the mother lode, as it were.

3. Dr. Seuss, e.g. : PEN NAME
Dr. Seuss was the pen name of Theodor Seuss Geisel. Geisel was commander of the Animation Department of the USAF during WWII. He was behind many propaganda films including one called “Our Job in Japan”. Even though the film was produced specifically as propaganda, this same movie was used after the war as a basis for the short feature “Design for Death”, a study of Japanese culture released in 1947 and winner of an Oscar for best Documentary.

5. Charlemagne’s domain: Abbr. : HRE
The Holy Roman Empire (HRE) existed from 962 to 1806 AD and was a territory of varying size over the centuries that centered on the Kingdom of Germany. The HRE was a successor to the western half of the Ancient Roman Empire.

Pepin the Short was the Duke of the Franks from 751 to 768. Pepin expanded the Frankish Empire and then law dictated that he had to leave the Empire divided between his two sons, Carloman I and Charlemagne. Carloman I was given lands that were centered around Paris, and Charlemagne was given lands that completely surrounded his brothers territory. So it fell to Charlemagne to defend and extend the borders of the empire. It is because of this geographical division of power that it’s Charlemagne who we read about today, not Carloman I. It was Emperor Charlemagne who in effect founded the Holy Roman Empire.

7. Romeo’s precursor? : ALFA
The “Alfa” in Alfa Romeo is actually an acronym, standing for Anonima Lombarda Fabbrica Automobili (“Lombard Automobile Factory, Public Company”), an enterprise founded in 1909. The company was taken over by Nicola Romeo in 1915, and in 1920 the company name was changed to Alfa Romeo.

21. ___ Protocol (1997 agreement) : KYOTO
The Kyoto Protocol is designed to fight global warming and was adopted on 11 December 1997 in Kyoto, Japan. Almost 200 states have since signed the protocol and have committed to achieving the year 2012 targets laid down in the document. The most notable signature absent on the document is of course one representing the United States, as we are responsible for over one third of the greenhouse gases emitted across the world. The other significant polluters that have not ratified the agreement are China, India and Brazil.

37. Indian master? : SAHIB
Sahib is actually an Arabic word, which translates to “owner” or “proprietor”, or it can also mean “friend”. It is perhaps most recognized as a term of address used in India, where it is used in much the same way as we use “mister” in English.

38. Linda who married Paul McCartney : EASTMAN
Linda Eastman is best-known for her marriage to Paul McCartney. Having said that, I was more aware of Linda’s work as a photographer. She really knew how to take black & white images. In 1968, Eastman’s portrait of Eric Clapton was the first photo by a woman to be used on the front cover of “Rolling Stone” magazine.

Rho is the Greek letter that looks just like our Roman letter “p”.