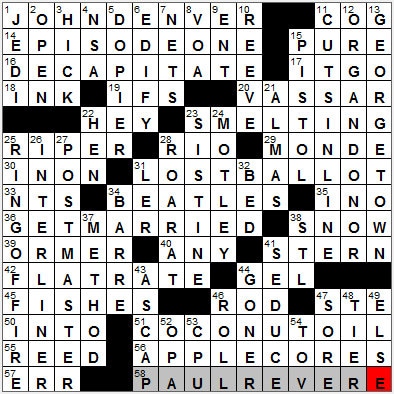 CROSSWORD SETTER: Peter A. Collins,
THEME: The Fab Four … the name of my favorite group is in the middle of the grid, and each band member’s name starts each of the corner answers:


Today’s Wiki-est, Amazonian Googlies
Across
1. Colorado state song composer : JOHN DENVER (John Lennon)
“Rocky Mountain High” is a song by John Denver. Since 2007, “Rocky Mountain High” has been one of the two official state songs of Colorado. The song may not have received that honor had there not been a clarification of the meaning of some of the words. Some radio stations actually banned it for a while, assuming that the “high” in the title was a drug reference.

Singer John Denver’s real name was Henry John Deutchendorf, Jr. Denver was a great singer, and he had many other passions. He was an excellent photographer, and an avid skier and golfer. He also loved flying and collected vintage biplanes. He flew himself to concerts in his own Learjet, and had a handful of other planes that he would take out for spin when he could. One of his planes was an Experimental Rutan Long-EZ, a home-built aircraft noted for its fuel efficiency and tremendous range. Denver took the Rutan Long-EZ up in the middle of October 1997. He hadn’t had much experience with the plane, even though he had logged over 2,700 hours of flying time in other aircraft. The plane crashed into the ocean near Pacific Grove, California in an accident that Denver did not survive.

John Lennon and Paul McCartney made an agreement before they became famous that they would always give joint credit for their songs. In the early days, the duo wrote their songs together, working alongside each other. Soon they would write songs individually, with one giving the other limited input. Regardless, the Lennon-McCartney attribution was used for all the songs they wrote either individually or together right up to 1974. The partnership was officially dissolved in December 1974, in the Polynesian Resort in Walt Disney World, Florida. There John Lennon put his signature to official documents couriered to him by Apple’s lawyers (Apple being the Beatles record label).

20. Liberty League school : VASSAR
Vassar College in Poughkeepsie, New York is now a coeducational school after over a century as a woman’s college since its founding in 1861. The school was officially declared co-ed in 1969, although it had accepted a handful of male students on the GI Bill after WWII.

23. Coke user’s activity : SMELTING
Metals are found in ore in the form of oxides. In order to get pure metal from the ore, the ore is heated and the metal oxides within are reduced (i.e. the oxygen is removed) in the chemical process known as smelting. The oxygen is extracted by adding a source of carbon or carbon monoxide which uses up the excess oxygen atoms to make carbon dioxide, a waste product of smelting (and of course, a greenhouse gas).

28. Christ the Redeemer overlooks it : RIO
The iconic statue of Jesus overlooking the city of Rio de Janeiro in Brazil is known as Cristo Redento (Christ the Redeemer). The statue was constructed between 1922 and 1931. It is the largest Art Deco statue in the world, standing at over 30 feet tall.

33. Some Windows systems : NTS
Windows XP, Windows Vista and now Windows 7; they’re all based on the Windows NT operating system. There is a common perception that Windows NT (WNT) takes its name from VMS, an earlier operating system developed by Digital Equipment Corporation. “WNT” is what’s called a “Caesar cypher” of “VMS”, as you just augment the the letters of VMS alphabetically by one to arrive at WNT. Bill Gates disputes this derivation of the name, and in a 1998 interview stated that the NT originally stood for N-Ten and that the marketing folks at Microsoft revised history by changing it to “New Technology”.

34. Players who made a historic touchdown in 1964 : BEATLES
The Beatles arrived in the US for their first tour in February 1964, arriving at John F. Kennedy Airport to a very, very warm reception. The group’s arrival was the first “action” in what came to be known as “the British Invasion”.

35. Dionysus’ aunt : INO
Ino was a mortal queen of Orchomenus through her marriage to King Athamas. In Greek mythology, Ino became the goddess Leukothea after her death. Leukothea provided divine aid to Odysseus, according to Homer’s “Odyssey”. She provided Odysseus with a magical veil that he used to escape from Poseidon.

39. Alternative name for abalone : ORMER
The large edible sea snails that we call abalone are called ormer in the British Isles.

56. Delicious leftovers : APPLE CORES
The first Golden Delicious tree was found in a pasture field on a farm in West Virginia in the late 1800s. There were no other apple trees growing nearby, so the farmer left it to grow. The fruit proved to be popular and the farmer sold the tree to a local nursery. The nursery named the apple Golden Delicious to go along with the existing line of Red Delicious apples, even though the two varieties trees aren’t very closely related. The Golden Delicious is now the official fruit of West Virginia.

58. Figure on a $5,000 EE savings bond : PAUL REVERE (Paul McCartney)
Paul Revere is of course famous for having alerted the Colonial militia when the British military arrived in the build up to the battles of Lexington and Concord. Revere earned his living as a silversmith. After the war, Revere returned to his trade and diversified into other metalwork. Revere was the first American to develop a process to roll copper into sheets so that the metal could be used to sheathe the hulls of naval vessels.

Down
1. Sci-fi knight : JEDI
The Jedi are the “good guys” in the “Star Wars” series of movies. The most famous Jedi knights from the films are Obi-Won Kenobi (played by Alec Guinness, and later Ewan McGregor) and Yoda (voiced by Frank Oz). Well, they’re my favorites anyway …

4. Grp. concerned with hacking : NSA
The National Security Agency (NSA) was set up in 1952 by President Truman, a replacement for the Armed Forces Security Agency that had existed in the Department of Defense since 1949. The NSA has always been clouded in secrecy and even the 1952 letter from President Truman that established the agency was kept under wraps from the public for over a generation. I really like the organization’s nickname … “No Such Agency”.

6. Improve morally : EDIFY
“To edify” is to provide instruction in order to improve spiritually, morally or intellectually. The intent is to “build up” someone’s faith or morality and so “edify” comes from the Latin “aedificare” meaning “to build, construct”. This Latin root also gives us our word “edifice”.

8. Big multilanguage broadcaster, briefly : VOA
The US began shortwave propaganda broadcasts in early 1942, just after America entered WWII. The first broadcast to Germany was introduced by the “The Battle Hymn of the Republic” and opened with the words:

“Today, and every day from now on, we will be with you from America to talk about the war. The news may be good or bad for us — We will always tell you the truth.”

9. Penlight-wielding doc : ENT
An Ear, Nose and Throat specialist is an ENT.

10. Seymour’s “Somewhere in Time” co-star : REEVE
“Somewhere in Time” is a fascinating 1980 film directed by Jeannot Szwarc, starring Christopher Reeve and Jane Seymour. The movie is a screen adaptation of a 1975 novel “Bid Time Return” by Richard Matheson. The movie has a real cult following, with a fan club called INSITE (International Network of Somewhere in Time Enthusiasts). Many members of INSITE meet every year, in period costume, at the Grand Hotel on Mackinac Island, Michigan that was the setting of the movie (and where it was largely filmed).

13. Guyanese capital : GEORGETOWN (George Harrison)
The city of Georgetown is the capital of the South American country of Guyana, and sits on the southern end of the Caribbean Sea.

23. Raphael’s “___ Madonna” : SISTINE
The “Sistine Madonna” is a painting created by the Italian artist Raphael in 1513-1514. The work was commissioned by the Benedictine monks of the Monastery of San Sisto in northen Italy, hence the painting’s name.

25. What “burns, burns, burns” in a hit country song : RING OF FIRE (Ringo Starr)
The country classic “Ring of Fire” was written by Merle Kilgore and June Carter. The first recording of the song was made by June Carter’s sister Anita, in 1963. The second recording was a little more successful, by June Carter’s husband … Johnny Cash.

Ringo Starr’s real name is Richard Starkey. Before he joined the Beatles (replacing drummer Pete Best), Starkey played with the Raving Texans. It was with the Raving Texans that he adopted the name “Ringo Starr” because he wore a lot of rings, and he thought it sounded “cowboyish”. Back then his drum solos were billed as “Starr Time”.

“The Lorax” is a children’s book written by Dr. Seuss. It is an allegorical work questioning the problems created by industrialization, and in particular its impact on the environment.

34. Support for a dancer : BARRE
A barre is a handrail used by ballet dancers for warm-up exercises and to provide support when practicing certain moves.

38. Busch Stadium scoreboard abbr. : STL
The St. Louis Cardinals Major League Baseball team plays at Busch Stadium. Busch Stadium is the third stadium in the history of St. Louis to have the Busch name. The first two were named for Gussie Busch, the brewing magnate and former Cardinals team owner. The current stadium is named for the brewery though, and not Gussie.

52. ___-Locka, Fla. : OPA
The Florida city of Opa-Locka has a relatively short history. It was founded in 1926 and was developed by aviation pioneer Glenn Curtis using a Moorish architectural theme. The first name chosen for the city was Opa-tisha-wocka-loca, a Seminole place name, but that didn’t survive very long.

53. Intel product, for short : CPU
The Central Processing Unit (CPU) is the main component on the “motherboard” of a computer. The CPU is the part of the computer that carries out most of the functions required by a program. Nowadays you can get CPUs in everything from cars to telephones.