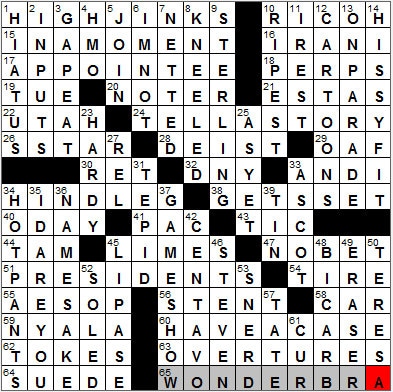 
Today’s Wiki-est, Amazonian Googlies
Across
1. Tomfoolery : HIGH JINKS
Our expression “high jinks”, meaning a prank or a frolic, was once the name of an 18th-century Scottish drinking game, would you believe? A bad score on a dice and you had to take a drink or do something undignified.

In Middle English, in the middle of the 14th century, a mentally deficient man would be called a Thom Foole, sort of a nickname. We retain the name today in our word “tomfoolery” meaning “clowning around”.

10. Xerox rival : RICOH
Ricoh is a Japanese company that started out in 1936 and by the year 2000 was the biggest manufacturer of copiers in the world. The company is also well known as a supplier of cameras.

16. One who comes from Qom : IRANI
Qom (also Q’um) is a city in Iran located about 100 miles southwest of Tehran. Qom is a holy city in the Shi’a Islam tradition, and a pilgrimage destination.

19. Mardi Gras, for one: Abbr. : TUE
“Mardi Gras” translates from French as “Fat Tuesday”, and gets its name from the practice of eating rich foods on the eve of the fasting season known as Lent.

21. These, to a Tico : ESTAS
“Tico” is a familiar name for someone from Costa Rica. A tico would speak Spanish.

22. Jazz setting : UTAH
The Utah Jazz professional basketball team moved to their current home in Salt Lake City in 1979. As one might guess from the name, the team originated in New Orleans, but only played there for five seasons. New Orleans was a tough place to be based because venues were hard to come by, and Mardi Gras forced the team to play on the road for a whole month.

Stars are usually classified based on the color of the light that they emit. These classifications are, from hottest to coolest, O, B, A, F, G, K and M. One way to remember the order of these letters is to use the mnemonic “Oh, be a fine girl, kiss me”. The colors of these stars range from blue (class O) to red (class M). Our sun is class G, a yellow star, but I think we all know that …

29. Schlemiel : OAF
A “schlemiel“ is an awkward and clumsy person. “Shlemiel” is the Yiddish for “a bungler”, with the term coming from the German story “The Wonderful History of Peter Schlemihl”, published in 1813.

32. Letters after Sen. Charles Schumer’s name : D-NY
Chuck Shumer is the senior US Senator from New York, a Democrat (i.e. D-NY). Shumer is the third-ranking Democrat in the Senate, after Majority Leader Harry Reid and Majority Whip Dick Durbin.

40. Anita of song : O’DAY
Anita O’Day was the stage name of the jazz singer Anita Colton. O’Day had problems with heroin and alcohol addiction leading to erratic behavior and earning her the nickname “The Jezebel of Jazz”.

41. Super ___ : PAC
A Political Action Committee (PAC) is a private group that works to influence the outcome of a particular election or group of elections. Any group becomes a PAC by law when it receives or spends more than $1,000 for the purpose of influencing the outcome of an election. In 2010 the Supreme Court ruled that PACS that did not make direct contributions to candidates or parties could accept unlimited contributions. These “independent-expenditure only committees” are commonly referred to as “super PACs”.

44. Lid for a laddie : TAM
A tam o’shanter is a man’s cap traditionally worn by Scotsmen. “Tams” were originally all blue (and called “blue bonnets”) but as more dyes became readily available they became more colorful. The name of the cap comes from the title character of the Robert Burns poem “Tam O’Shanter”.

55. Moral creator : AESOP
Aesop lived in Ancient Greece, probably around the sixth century BC. Supposedly Aesop was born a slave, somehow became a free man, but then met with a sorry end. He was sent to the city of Delphi on a diplomatic mission but instead insulted the Delphians. Aesop was tried on a trumped-up charge of stealing from a temple, sentenced to death and was thrown off a cliff.

56. Canal-clearing tube : STENT
In the world of medicine and surgery, a stent is an artificial tube inserted inside a vessel in the body, say an artery, so that it reduces the effects of a local restriction in the body’s conduit.

59. Antelope with lyre-shaped horns : NYALA
A nyala is an antelope from South Africa with spiral horns. “Nyala” is the Swahili name for the beast.

62. Doesn’t keep off the grass? : TOKES
“Toke” is a slang term for a puff on a marijuana cigarette or on a pipe containing the drug.

64. Material named for a country : SUEDE
Suede is leather made from the underside of the skin, mainly from a lamb. As such it is very soft, although not as durable as leather made from the exterior skin. The soft leather was, and is still used for making gloves. Back in 1859 these gloves were called “gants de Suede” in France, or “gloves of Sweden”. So, “suede” is simply the French word for Sweden.

65. Special elevator? : WONDERBRA
The Wonderbra became very popular in the 1990s, although the brand name has been around since 1935.

Down
1. Break : HIATUS
A “hiatus” is a break or opening in a material object. “Hiatus” is Latin for “opening”.

2. Places for jacks : INPUTS
A jack is an electrical connector.

The health care management company known as CIGNA was formed in 1982 by a merger of two insurance companies. One was Connecticut General (CG) and the other Insurance Company of North America (INA).

9. Like much flatware : STERLING
Pure silver is too soft for use in production of the likes of knives and forks or salvers. So, it is converted into an alloy with a second metal, usually copper. The designation “sterling” is reserved for alloys containing 92.5% silver.

12. They often include balloons : CARTOONS
The word “cartoon” was originally used for a “drawing on strong paper”, a durable drawing used as a model for another work. The term comes from the French word “carton” meaning “heavy paper, pasteboard”. Cartoons have been around a long time, with some of the most famous having being drawn by Leonardo da Vinci.

14. Diva’s conspicuous display : HISSY FIT
“Diva” comes to us from Latin via Italian. “Diva” is the feminine form of “divus” meaning “divine one”. The word is used in Italy to mean goddess or fine lady, and especially is applied to the prima donna in an opera. We often use the term to describe a singer with a big ego.

33. Accouterment for Fred of “Scooby-Doo” : ASCOT
An Ascot tie is that horrible looking (I think!) wide tie that narrows at the neck, which these days is only really worn at weddings. The tie takes its name from the Royal Ascot horse race at which punters still turn up in formal wear at Ascot Racecourse in England.

34. Barely-there bottoms : HOT PANTS
Hot-pants were quite the fad. They were introduced in fashion shows in the winter of 1970/71, and became a huge sensation in the summer of ’71. By the end of the year, hot pants were “gone”.

42. Cuban coin : CENTAVO
“Centavo” is a Spanish and Portuguese word, and is used for the coin that represents 1/100 of the basic monetary unit of quite a few countries, including Cuba. “Centavo” comes from the Latin “centum” meaning “one hundred” and “-avo” meaning “portion, fraction”.

45. Digestive enzyme : LIPASE
Lipase is an enzyme that breaks down fat.

46. Obama energy secretary Chu : STEVEN
Steven Chu is the Secretary of Energy in the Obama Cabinet. Chu is a physicist by trade, a winner of the Nobel Prize in Physics in 1997.

48. Leavening agent, briefly : BICARB
“Bicarb” is a familiar term for sodium bicarbonate. Another name for the same compound is “baking soda”. When sodium carbonate is added to a batter, it reacts with acids and releases carbon dioxide which gives baked goods texture, all those “holes”.

50. Mother ___ : TERESA
Mother Teresa was born in 1910 in the city that is now called Skopje, the capital of Macedonia. She was given the names Agnes Gonxha Bojaxhiu (“Gonxha” means “little flower” in Albanian). She left home at the age of 18 and joined the Sisters of Loreto, and headed to Loreto Abbey in Rathfarnham in Dublin, Ireland in order to learn English. Her goal was to teach in India, and English was the language used there for instruction by the nuns. After Mother Teresa passed away in 1997 she was beatified by Pope John Paul II, a step on the road to canonization. In order for her to be beatified there had to be documented evidence of a miracle that was performed due to her intercession. The miracle in question was the healing of a tumor in the abdomen of a woman due to the application of a locket containing a picture of Mother Teresa. Documentation of a second miracle is required for her to be declared a saint.

57. Site of many London hangings : TATE
The museum known as “the Tate” is actually made up of four separate galleries in England. The original Tate gallery was founded by Sir Henry Tate as the National Gallery of British Art. It is located on Millbank in London, on the site of the old Millbank Prison, and is now called Tate Britain. There is also the Tate Liverpool in the north of England located in an old warehouse, and the Tate St. Ives in the west country located in an old gas works. My favorite of the Tate galleries is the Tate Modern which lies on the banks of the Thames in London. It’s a beautiful building, a converted power station that you have to see to believe.