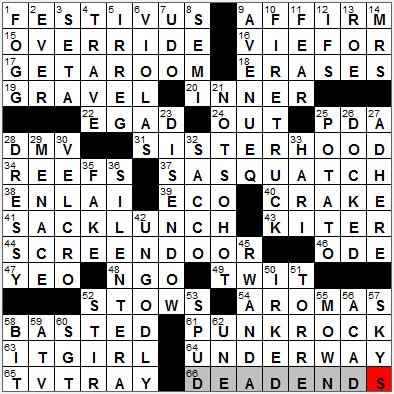 Today’s Wiki-est, Amazonian Googlies
Across
1. “Seinfeld” holiday that begins with the Airing of Grievances : FESTIVUS
Festivus is celebrated by some on December 23 each year, and has been done so since 1966. The holiday is an invention of the writer Dan O’Keefe. He introduced is to his family as a way of celebrating the season without falling prey to commercial pressure. Festivus has become popular since it was featured in a 1997 episode of the TV sitcom “Seinfeld”. Dan O’Keefe’s son was a screenwriter for that episode.

22. Old-style oath : EGAD
“Egad” developed as a polite way of saying “oh God” in the late 1600s and is an expression of fear or surprise somewhat like “good grief!”.

25. See 17-Across : PDA
PDA is an acronym used for “public display of affection”.

34. Settings of many schools : REEFS
You can find schools of fish in reefs.

37. One “caught” on grainy film : SASQUATCH
The sasquatch or bigfoot is our North American equivalent of the yeti, the ape-like creature said to inhabit the Himalayas. Bigfoot is supposedly hiding out mainly in the Pacific Northwest of North America.

38. Important name in Chinese history : EN-LAI
Zhou Enlai (also Chou En-Lai) was the first government leader of the People’s Republic of China and held the office of Premier from 1949 until he died in 1976. Zhou Enlai ran the government for Communist Party Leader Mao Zedong, often striking a more conciliatory tone with the West than that of his boss. For example, he was instrumental in setting up President Nixon’s famous visit to China in 1972. Zhou Enlai died just a few months before Mao Zedong, with both deaths leading to unrest and a dramatic change in political direction for the country.

39. Prefix with consumer : ECO-
An ecoconsumer is a consumer who makes purchases based on consideration of environmental impact.

40. Short-billed marsh bird : CRAKE
Rails are birds of the family Rallidae (hence their name). Outside of America, the name “rail” tends to be reserved for long-billed species and the term “crake” is used for short-billed species.

43. One whose checks should be chucked? : KITER
Check kiting is illegal. The idea behind kiting is to write a check, even though there are insufficient funds to cover the amount. The con artist then writes another check, also with insufficient funds, from another bank’s account to cover the original check. I am not sure it would work nowadays, but then I am as honest as the day is long! Oh, and I think the term “kiting” comes from the older phrase “go fly a kite”, the idea being that the bad check is floated on air (non-existent funds).

47. Naval petty officer, briefly : YEO
In the US Navy, a yeoman is tasked with administrative and clerical work. In fact, the position of yeoman is the oldest rating in the navy.

48. Vietnam’s ___ Dinh Diem : NGO
When France withdrew from French Indochina in the mid-fifties, Ngo Dinh Diem led the movement to create the Republic of Vietnam. In what was regarded as a fraudulent referendum, the new country of Vietnam was formed and in 1955 Diem declared himself its first president. His rule was far from peaceful, and he was assassinated by rivals in 1963.

49. Boob : TWIT
“Twit” is a word not used very often here in America. It’s a slang term that was quite common in England where is was used for “someone foolish and idiotic”.

61. Genre for Iggy Pop : PUNK ROCK
Iggy Pop is a punk rock performer from Muskegon, Michigan. When he was in high school, he was a drummer for a local band called the Iguanas, and so was given the nickname “Iggy”.

63. Young celebrity socialite : IT-GIRL
Clara Bow was a fabulous star of silent film, with her most famous movie being “It” from 1927. Clara Bow’s performance was so celebrated in the movie that she was forever to be known as the “It-girl”. The term “it” was a euphemism for “sex appeal”, and that is what Clara Bow was known to “exude”. Bow applied her red lipstick in the shape of a heart, and women who copied this style were said to put on a “Clara Bow”.

Down
1. Literary world traveler : FOGG
“Around the World in 80 Days” is just a wonderful adventure story, written by French author Jules Verne and first published in 1873. There have been some great screen adaptations of the story, including the 1956 movie starring David Niven as Philieas Fogg. In almost all adaptations, a balloon is used for part of the journey, perhaps the most memorable means of transportation on Fogg’s trip around the world. However, if you read the book, Fogg never used a balloon at all.

2. Mindful leader? : EVER
It’s a great idea to be ever-mindful …

4. Section between crossbeams : TRAVE
In architecture, a “trave” is a crossbeam, or the the section of perhaps a ceiling that is formed by crossbeams.

7. Japanese vegetable : UDO
Udo is a perennial plant native to Japan known taxonomically as Aralia cordata. The stems of udo are sometimes boiled up and served in miso soup.

9. Show set in an “outer-outer borough” of New York : AVENUE Q
“Avenue Q” is a musical inspired by “Sesame Street”, with puppets being used for all the characters on the stage. It’s an adult-oriented show, but a parody on the children’s show. Some of the characters are clearly knock-offs of “Sesame Street” favorites e.g. Rod and Nicky (Bert and Ernie) and Trekkie Monster (Cookie Monster).

13. Some eggs : ROE
Roe is the name given to fish eggs or the ovaries of a fish laden with eggs. When the roe develop into fish, the fish may swim around in schools.

25. Ingredient in colcannon, along with cabbage : POTATO
Colcannon is one of my favorite dishes, and one that my American wife makes better than anyone I know from back in Ireland. The traditional Irish recipe calls for potatoes and cabbage with scallions, butter and salt. My wife’s secret is not to skin the potatoes before mashing them, and to substitute leeks for scallions. Lovely …

30. Invention inspired by burs : VELCRO
The hook-and-loop fastener we now call Velcro was invented in 1941 by Georges de Mestral, a Swiss engineer. He noticed that the seeds of the burdock plant (burrs or burs) stuck to his clothes. Under the microscope he found hooks on the burrs, grabbing hold of loops in his clothing. After years of development, he came up with a way of simulating the natural hook using man-made materials, and Velcro was born.

32. Defendant in a much-publicized 1920s trial : SACCO
Nicola Sacco and Bartolomeo Vanzetti were two anarchists, Italian immigrants accused of committing murder during an armed robbery in 1920. Sacco and Vanzetti were arrested the day after the crime. There followed two controversial trials, guilty verdicts and several appeals that went all the way to the US Supreme Court. Despite mounting evidence that the pair was innocent, the guilty verdicts were repeatedly upheld. A lot of the public accepted that Sacco and Vanzetti were not guilty, and many protests were staged. Regardless, the two were executed in the electric chair in 1927.

33. Mata ___ : HARI
Mata Hari was the stage name used by Margaretha Geertuida Zella, born in the Netherlands in 1876. After an unsuccessful and somewhat tragic marriage, Zella moved to Paris in 1903 where she struggled to make a living. By 1905 she was working as an exotic dancer and using the name Mata Hari. She was a successful courtesan, notably moving in various circles of high-ranking military officers. She apparently worked as a double agent, both for the French and the Germans. When Mata Hari was accused by the French of passing information to the enemy, she was tried, found guilty and executed by firing squad at the height of WW1, in 1917.

42. Way too early : UNGODLY
“Ungodly” can mean “outrageous”, as in “what an ungodly hour!”

45. Land near the Equator : RWANDA
The Tutsi are the second largest population of people in Rwanda, with the Hutu being the largest group. The bloody conflict that has existed between the Tutsi and Hutu peoples dates back to about 1880 when Catholic missionaries arrived in the region. The missionaries found that they had more success converting the Hutus than the Tutsi, and when the Germans occupied the area during WWI they confiscated Tutsi land and gave it to Hutu tribes in order to reward religious conversion. This injustice fuels fighting to this very day.

51. Dodgers manager before Mattingly : TORRE
As manager, Joe Torre was part of four World Series wins, all of them with the New York Yankees baseball team. Torre is an Italian American, born in Brooklyn, New York. During the run up (pun intended!) to the 2006 Winter Olympics in Turin, Torre carried the Olympic flame part of the way through Florence in Italy, handing it over to the next runner at the famous Ponte Vecchio. I’d guess that was quite a thrill for him …

53. 25-Down, informally : SPUD
The word “spud” is used as a slang term for a potato and was first recorded in the mid-1800s, in New Zealand would you believe?

57. “___ the Limit” (Temptations album) : SKY’S
The singing group known as the Temptations used to be known as the Elgins, and was formed in 1960 in Detroit. The group is still performing today, although only the second tenor, Otis Williams, was part of the original quintet. The Temptations were very much associated with their “sister group”, the Supremes.

62. Champagne article : UNE
Champagne is a historic province in the northeast of France, famous of course for its sparkling white wine.