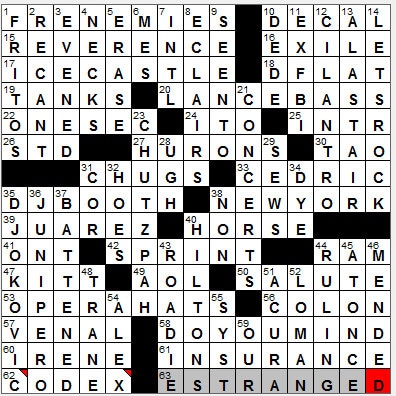 Today’s Wiki-est, Amazonian Googlies
Across
20. “Out of Sync” autobiographer, 2007 : LANCE BASS
‘N Sync was an American boy band from Orlando, Florida that was formed in 1995. The name of the group came from a comment by the mother of band member Justin Timberlake, who said the boys voices sounded “in sync”. But, it’s also true that the letters of the name ‘N Sync are the last letters of the given names of the five band members:

25. Like some verbs: Abbr. : INTR
An intransitive verb is one that does not take a direct object. For example, “to sleep” or “to die”.

30. Means to enlightenment : TAO
The Chinese character “tao” translates as “path”, but the concept of Tao signifies the true nature of the world.

33. ___ Diggory, rival of Harry Potter : CEDRIC
Cedric Diggory is a fellow student of Harry Potter at Hogwarts. Cedric is two years ahead of young Harry, and is somewhat of a rival.

35. Spinner’s spot : DJ BOOTH
The world’s first radio disk jockey was one Ray Newby of Stockton, California who made his debut broadcast in 1909, would you believe? When he was 16 years old and a student, Newby started to play his records on a primitive radio located in the Herrold College of Engineering and Wireless in San Jose. The records played back then were mostly recordings of Enrico Caruso.

38. When repeated, a Las Vegas casino : NEW YORK
New York-New York is a major casino on the Las Vegas Strip. The casino is cleverly designed with stylized replicas made of famous New York City landmarks. Although the facade of the hotel is a model of the new York City skyline, and the property was opened in 1997, there is no depiction of the World Trade Center. That’s because the design is meant to represent New York of the 1940s.

39. Five-term Mexican president : JUAREZ
Benito Juárez served five times as President of Mexico, taking office for the first time in 1858, and leaving office for the last time in 1872. A number of locations across the country, and beyond, have been named in his honor, including the city of Ciudad Juárez that sits just across the US-Mexico border from El Paso.

41. Home of Sault Ste. Marie: Abbr. : ONT
In the summer of 2010 I spent a very interesting afternoon watching ships make their way through the Soo Locks and Soo Canal between Lake Superior and the lower Great lakes. The name “Soo” comes from the US and Canadian cities on either side of the locks, both called Sault Ste. Marie.

56. Something seen after hours? : COLON
When writing out a time, there is usually a colon used after the hour and before the minute e.g. 09:35.

57. Buyable, in a way : VENAL
Someone described as venal is open to bribery.

60. She outwitted Sherlock : IRENE
The character Irene Adler only appeared in one of the Sherlock Holmes stories by Sir Arthur Conan Doyle. In that story, “A Scandal in Bohemia”, Holmes expresses remarkable admiration for Adler as a woman and as a foe. As a result, derivative works in the Holmes genre often feature Adler as something of a romantic interest for Sherlock.

62. Ancient manuscript : CODEX
A codex is an old book, one in the format of a modern book as opposed to its predecessor which was a scroll. The word “codex” comes from the Latin “caudex” meaning “trunk of a tree”.

Down
1. Four-cornered chips : FRITOS
The Frito Corporation was started in 1932 by Elmer Doolin, basically in his mother’s kitchen. Doolin paid $100 for a corn chip recipe from a local restaurant and started producing Fritos at the rate of 10 pounds per day.

8. Desserts not for the calorie-conscious : ECLAIRS
The name for the pastry known as an éclair is clearly French in origin. The French word for lightning is “éclair”, but no one seems to be too sure how it came to be used for the rather delicious “temptation”.

12. Burrito flavoring : CILANTRO
What we know here in North America as cilantro is called coriander in the UK and other parts of the world. “Cilantro” is the Spanish name for the herb.

23. Cheek : CHUTZPAH
Our word “chutzpah” meaning “nerve, gall, impudence” is derived from the Yiddish “khutspe”, which has the same meaning.

29. Works on shifts, say : SEWS
A shift is a dress that is cut above-the-knee and has no clearly-defined waist. This style of dress originated in the 1920s when it was worn by the “flappers”, young women who defyed social norms at the time. The shift was comfortable to wear and allowed easy movement, particularly on the dance floor.

31. French horn : COR
The English Horn is also known by its French name, the Cor Anglais, and is a double-reed woodwind instrument.

35. 2011 Wimbledon champion : DJOKOVIC
Novac Djokovic is a Serbian tennis player, the world No. 2 (behind Roger Federer). Djokovic is quite the character off the court it seems and he is very popular on the talk-show circuit, all around the world. It helps that Djokovic is fluent in several languages.

40. Family of Paris : HILTONS
Paris Hilton is the great-granddaughter of Conrad Hilton, the founder of Hilton Hotels.

43. One bringing a speaker onstage, maybe : ROADIE
A “roadie” is someone who loads, unloads and sets up equipment for musicians on tour, on the road.

52. Iconic Broadway role for Cobb : LOMAN
“Death of a Salesman” is a famous play by Arthur Miller, first produced in 1949. “Death of a Salesman” won a Pulitzer and several Tony Awards over the years. The “salesman” in the play is the famous character Willy Loman. The play originally opened up on Broadway and ran for 724 performances. The lead role was played by the veteran actor Lee J. Cobb.

54. “A Clockwork Orange” protagonist : ALEX
“A Clockwork Orange” is a novella by Anthony Burgess, first published in 1962. The story is about a young teenager named Alex, who leads a small gang on violent rampages each night. The story has been adapted for the big and small screens, most famously in a 1971 film by Stanley Kubrick. It’s way too violent for me …

55. Interstate hwy. ___ : SYST
The US Interstate System is more correctly known as the Dwight D. Eisenhower National System of Interstate and Defense Highways, a nod to President Eisenhower who championed the construction. The President had come to recognise the value of the German autobahn system in his experiences during WWII, and resolved to give the US a similar infrastructure. In real terms, the US Interstate construction project is said to have been the largest public works project since the building of the Pyramids of Egypt.