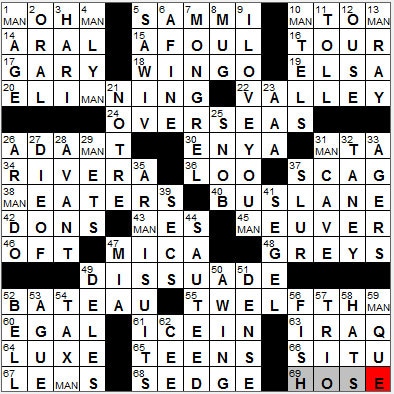 Peter Valentine’s Poetry … from the New York Times Crossword
You have to check out Peter’s compositions: poems written daily and only using words from the clues and answers of that day’s crossword!

Today’s Wiki-est, Amazonian Googlies
Across
5. “Sweetheart” of “Jersey Shore” : SAMMI
Sammi Giancola is one of the main characters on “Jersey Shore”, a very popular reality TV show on MTV.

“Jersey Shore” is yet another reality TV series, on MTV. The first season featured a group of eight friends sharing a house on the Jersey shore, and the second season had the same cadre tanning themselves in a house down in Miami.

14. Asia’s ___ Sea : ARAL
The Aral Sea is a great example of how man can have a devastating effect on his environment. In the early sixties the Aral Sea covered 68,000 square miles of Central Asia. Soviet Union irrigation projects drained the lake to such an extent that today the total area is less than 7,000 square miles, with 90% of the lake now completely dry. Sad …

16. What a Realtor may give : TOUR
Some helpful blog readers have educated me on the term “Realtor” and have pointed out why the word is capitalized. “Real estate agent” is a general, generic term. “Realtor” is the name given to a member of the trade association known as the National Association of Realtors (NAR). The NAR has gone so far as the trademark the term “Realtor” in the US.

17. U.S. Steel was once its biggest employer : GARY
The city of Gary, Indiana is located just 25 miles from downtown Chicago and falls within the Chicago metropolitan area (also known as Chicagoland). Gary was founded by US Steel in 1906, as the company selected it as the site for a new steel plant. The name was chosen in honor of Elbert H. Gary who was the key player in setting up US Steel in 1901.

20. QB who was twice a Super Bowl M.V.P. : ELI MANNING
Even I know that Eli Manning and his older brother Peyton are both quarterbacks!

30. “A Day Without Rain” artist : ENYA
Enya’s real name is Eithne Patricia Ní Bhraonáin, which can translate from Irish into Enya Brennan. Her Donegal family (in the northwest of Ireland) formed a band called Clannad, which included Enya. In 1980 Enya launched her very successful solo career. She sure does turn up a lot in crosswords!

31. Devilfish : MANTA
“Sea devil” is another name for the manta ray.

34. Artist with whom an exiled Leon Trotsky once lived : RIVERA
Diego Rivera was a Mexican painter, famous for his murals. His wife was an equally famous Mexican artist, Frida Kahlo.

36. Head for a pub : LOO
In old sailing ships the toilet area for the regular sailors was located in the forward part (the head) of the ship, hence the term “head” that has been used since then for any toilet on board a boat.

47. It’s flaky : MICA
Mica is a mineral, a sheet silicate. Thin sheets of mica are transparent and are used in place of glass in certain applications. This form of mica is called isinglass, and as it has a better thermal performance than glass it is a great choice for “peepholes’ in boilers and lanterns. Mica is also used in the electronics industry, making use of its unique electrical and thermal insulating properties.

52. “Le ___” (Matisse piece) : BATEAU
“Le Bateau” is an interesting work by Henri Matisse. The 1953 picture is made from pieces of painted paper arranged to look like a boat (“bateau”). The Museum of Modern Art acquired the piece in 1961 and put it on display. Matisse’s “Le Bateau” actually hung on the wall upside down for 47 days before anyone noticed the error …

60. Even: Fr. : EGAL
“Egal” is the French word for “equal, alike”, and a word we sometimes use in English. The national motto of France is of course “Liberté, égalité, fraternité”, meaning “Liberty, equality, fraternity (brotherhood).

64. Poshness : LUXE
“Luxe” can be used as an adjective, meaning elegant and sumptuous, posh.

67. Annual June race : LE MANS
Le Mans is a city in northwestern France. The city is famous for the 24 Hours of Le Mans sports car race that has been held annually since 1923. The 24-hour race uses the city’s race track, but closed city streets are also used for part of the circuit.

68. Marsh growth : SEDGE
Sedges are a family of plants that resemble grasses and rushes. Sedges are more properly called Cyperaceae.

Down
3. Mata ___ : HARI
Mata Hari was the stage name used by Margaretha Geertuida Zella, born in the Netherlands in 1876. After an unsuccessful and somewhat tragic marriage, Zella moved to Paris in 1903 where she struggled to make a living. By 1905 she was working as an exotic dancer and using the name Mata Hari. She was a successful courtesan, notably moving in various circles of high-ranking military officers. She apparently worked as a double agent, both for the French and the Germans. When Mata Hari was accused by the French of passing information to the enemy, she was tried, found guilty and executed by firing squad at the height of WW1, in 1917.

5. 2007 horror film : SAW IV
The “Saw” franchise of movies is gruesome in the extreme. I’ve only seen a few minutes of “Saw” footage (accidentally). The stories are about imprisoned victims who are faced with having to mutilate themselves to escape. Ugh …

9. 2009 bromance film : I LOVE YOU, MAN
“I Love You, Man” is a 2009 comedy starring Paul Rudd and Jason Segel in a “bromance”. The lovely Rashida Jones co-stars, adding some female interest.

12. Yorkshire river : OUSE
York is the biggest city on the River Ouse in Yorkshire. The name “Ouse” comes from the Celtic word “usa” meaning water.

13. Contemporary of Marcel Duchamp : MAN RAY
Man Ray was an American modernist artist who spent most of his working life in Paris. Man Ray was born in South Philadelphia in 1890, and his real name was Emmanuel Radnitzky. His family adopted the name “Ray” in response to anti-Semitic feeling that was prevalent at the time. Emmanuel was known as “Manny”, and he decided to assume the name Man Ray and use it for his work.

21. Dame’s lead-in? : NOTRE
Notre Dame de Paris is the spectacular Gothic cathedral that sits on the Île de la Cité, one of the islands in the middle on the River Seine in Paris. Notre Dame is home to many beautiful and significant artifacts, the most famous of which is the Crown of Thorns supposedly worn by Jesus Christ at his execution, placed in the cathedral in 1239. It’s also home to some magnificent gargoyles on the roof, and you can climb up to the roof and take a very close look at them.

25. High-hatter : SNOB
Back in the 1780s, a “snob” was a shoemaker or a shoemaker’s apprentice. By the end of the 18th century the word was being used by students at Cambridge University in England to refer to all local merchants and people of the town. The term evolved to mean one who copies those who are his or her social superior (and not in a good way). From there it wasn’t a big leap for “snob” to include anyone who emphasized their superior social standing and not just those who aspired to rank. Nowadays a snob is anyone who looks down on those considered to be of inferior standing.

26. TV director Iannucci : ARMANDO
Armando Iannucci is a very talented Scottish comedian and writer. After a long and successful career in the UK, Iannucci is now working on a US project. He created the HBO political satire “Veep” which is a remake of one of his hit shows in the UK called “The Thick of It”.

28. ___-garde : AVANT
People described as being avant-garde are especially innovative. “Avant-garde” is French for “advance guard”.

29. “Olympia” and others : MANETS
Edouard Manet painted “Olympia”” in 1863. The painting caused a lot of controversy when it was first shown. Despite the grandiose title, Olympia is actually a courtesan, something that caused offence in the art appreciation circles at that time. I have been lucky enough to have seen the work (which doesn’t offend anyone anymore!) a few times in the Musee d’Orsay in Paris.

32. Chief justice in the Dred Scott case : TANEY
Famously, the slave Dred Scott was unsuccessful in suing for his freedom in St. Louis, Missouri in 1857.

35. Parts of a fashionable “Collezioni” : ARMANI SUITS
Giorgio Armani is an Italian fashion designer and founder of the company that bears his name since 1975. Although Armani is famous for his menswear, the company makes everything from jewelry to perfume.

“Collezioni” is Italian for “collections”.

41. 9-Down co-star Jason : SEGEL
The actor Jason Segel appeared in the movies “Forgetting Sarah Marshall”, “Knocked Up” as well as “I Love You, Man”. On TV he appears as Marshall Eriksen in the sitcom “How I Met Your Mother”. Segel is an ordained minister and actually married a couple on “The Tonight Show” in 2010.

49. Editing marks : DELES
“Dele” is the editorial instruction to delete something from a document, and is often written in red.

59. Having failed aspirations : MANQUE
Manqué is an adjective or noun that is applied to someone who failed to live up to expectations. In French “manqué” means “missed”.