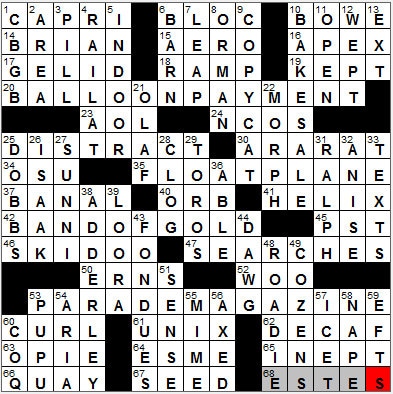 20A. Provision for ending many a mortgage : BALLOON PAYMENT
35A. Aircraft with pontoons : FLOATPLANE
42A. 1970 Freda Payne hit : BAND OF GOLD
53A. Weekend publication since 1941 : PARADE MAGAZINE

Today’s Wiki-est, Amazonian Googlies
Across
1. ___ pants : CAPRI
Capri pants first became popular on the island of Capri, apparently. They were invented in Europe in 1948, but only became stylish in the US in the sixties. Mary Tyler Moore often wore Capri pants on “The Dick Van Dyke Show” and to some extent she sparked a fashion trend. After a lull in the seventies and eighties there was a resurgence in sales after Uma Thurman wore them (and danced in them) in “Pulp Fiction”. Can’t stand the look of them myself …

6. Voting alliance : BLOC
“Bloc” is the French word for “block”.

10. Boxer Riddick : BOWE
Riddick Bowe is professional boxer from Brooklyn, New York. Bowe was Undisputed Heavyweight Champion of the World in 1992. A few years later Bowe retired from boxing to join the US Marines. However, after just 11 days of basic training Bowe asked to quit, and the Marine Corps came into a lot of criticism for acceding to his request.

17. Quite cold : GELID
“Gelid” is such a lovely word, and means “icy cold”. “Gelid” derives from the Latin “gelum” meaning “frost, intense cold”.

20. Provision for ending many a mortgage : BALLOON PAYMENT
A balloon payment is a large payment made at the end of a loan. Balloon payments usually aren’t a good idea as the later one makes payments, the more interest accrues.

30. Where Noah made landfall : ARARAT
Mount Ararat is in Turkey. Ararat is a snow-capped dormant volcano with two peaks. The higher of the two, Greater Ararat, is the tallest peak in the country. Ararat takes its name from a legendary Armenian hero called Ara the Beautiful (or Ara the Handsome).

34. Big Ten football powerhouse, for short : OSU
The athletic teams of Ohio State University (OSU) are called the Buckeyes, named after the state tree of Ohio. In turn the buckeye tree gets its name from the appearance of its fruit, a dark nut with a light patch thought to resemble a “buck’s eye”.

42. 1970 Freda Payne hit : BAND OF GOLD
Freda Payne is somewhat of a one-hit wonder as she is mostly known for her fabulous 1970 hit single “Band of Gold”. Freda’s younger sister is Scherrie Payne who was one of the Supremes.

46. Snowmobile brand : SKI-DOO
Ski-Doo is a brand name of snowmobile produced by the Canadian company, Bombardier Recreational Products. The first Ski-Doo went on sale in 1959 and was intended to be named a “Ski-Dog” as the marketing concept was that the personal snowmobile would replace the dogsleds used by hunters and trappers. A painter misread instructions and wrote “Ski-Doo” on the side of the vehicle instead of Ski-Dog, and the name stuck.

50. Flying fish-eaters : ERNS
The ern (also erne) is also called the white-tailed eagle, and the sea-eagle.

53. Weekend publication since 1941 : PARADE MAGAZINE
“Parade” is a weekly magazine often seen in newspapers on a Sunday. “Parade” turns up in over 500 Sunday papers in the US and is the most widely circulated magazine in the country with nearly 70 million readers. The first issue of “Parade” was published in 1941.

63. Helen Crump Taylor’s TV stepson : OPIE
Ron Howard sure has come a long way since playing Opie Taylor on “The Andy Griffith Show”. Howard has directed some fabulous movies including favorites of mine like “Apollo 13”, “A Beautiful Mind” and “The Da Vinci Code”. And today, “Opie” is a grandfather …

On “The Andy Griffith Show”, Helen Crumpy is Andy Taylor’s girlfriend. The couple get married in the first episode of “Mayberry R.F.D., the spinoff show. Helen Crump Taylor was played by actress Aneta Corsaut.

64. Salinger heroine : ESME
J. D. Salinger wrote a short story called “For Esme – with Love and Squalor”, originally published in “The New Yorker” in 1950. It is a story about a young English girl called Esme and an American soldier, and is set in WWII.

J. D. Salinger was a very reclusive author, most famous for his novel “Catcher in the Rye”. Salinger fought in WWII after he was drafted into the US Army. He saw action on Utah Beach on D-Day, and in the Battle of the Bulge. He also spent a lot of time interrogating prisoners due to his knowledge of French and German, and he was one of the first Americans to go into a liberated concentration camp. He later spent time in hospital suffering from what was then called combat stress reaction, as he tried to deal with what he saw in the German camps.

68. ___ Kefauver, 1956 vice-presidential candidate : ESTES
Estes Kefauver was a Democratic politician from Tennessee. In 1956 Kefauver was the running mate of Adlai Stevenson when Stevenson made a bid for the presidency. The pair of course lost to the Eisenhower-Nixon ticket.

2. ___ 51 (ufologist’s interest) : AREA
The famed Area 51 is a remote base in the USAF Nevada Test and Training Range. There’s no question that Area 51 is an unusual base in that frontline operational units are not deployed there. It seems that it is used for developing and testing new and classified weapons facilities for the US Military and other US agencies like the CIA. The government did not even acknowledge that Area 51 existed until 1995, and this official position fuelled a theory that the base is home to UFOs that landed on Earth.

8. Financial adviser Suze : ORMAN
Suze Orman is a financial advisor who has gotten her message out on television, in books and on the speaking circuit. She often appears on PBS, and indeed is the most successful fundraiser public television has ever had.

25. TV/radio host Lou : DOBBS
The journalist Lou Dobbs came to prominence as the anchor of the popular CNN business show “Lou Dobbs Tonight” which ran from 1980 to 2009. Apparently Dobbs was considering a run for the office of US President and may still be considering a run for one of the US Senate seats for New Jersey.

26. Chris with the 1991 hit “Wicked Game” : ISAAK
Chris Isaak is not only an American rock musician, but has also had a lot of acting parts. Isaak had small roles in movies like “Married to the Mob” and “The Silence of the Lambs”, but I remember him as astronaut Ed White in the fabulous HBO miniseries “From the Earth to the Moon”.

31. Sampson of the 1980s-’90s N.B.A. : RALPH
Ralph Sampson is retired professional basketball player who was the number one pick in the NBA draft of 1983. After a promising start to his career, Sampson had a tough time in the professional leagues largely due to knee injuries that required three separate surgeries.

32. Biscotti flavoring, sometimes : ANISE
What we know in this country as “biscotti” is more properly called “biscotti di Prato”. It is a twice-baked, almond-flavored confection that originated in the Italian city of Prato. Modern versions of biscotti often contain anise or cinnamon in addition to the traditional almond flavoring.

38. Cannonball of jazz fame : ADDERLEY
Cannonball Adderley was an alto-sax player whose heyday was in the fifties and sixties. Adderley picked up the nickname “Cannonball” in high school as apparently he was a big eater. Go figure …

39. Irish lullaby syllables : LOO-RA
The song from Ireland called “Too-Ra-Loo-Ra-Loo-Ral” was written in 1914 by one James Royce Shannon. The song became quite a hit after it was sung by Bing Crosby in the 1944 movie “Going My Way”.

43. Melted-cheese dishes : FONDUES
“Fondu(e)” is the French word for “melted”.

44. Deputy ___ (Terrytoons character) : DAWG
Deputy Dawg is a cartoon character in the Terrytoon television series. Deputy Dawg is a deputy sheriff in the State of Mississippi. I remember him well as my parents put curtains on the windows in our bedroom when we were very young, curtains which featured the characters Deputy Dawg and Yogi Bear.

48. One who sets the stage? : ROADIE
A “roadie” is someone who loads, unloads and sets up equipment for musicians on tour, on the “road”.

49. Deceives : COZENS
What a lovely verb, “to cozen”! Meaning to cheat or hoodwink, it comes from the Middle English word “cosin” meaning fraud or trickery.

53. ___ platter : PUPU
In Hawaiian, “pu-pu” is a word originally meaning “snail”. Nowadays “pu-pu” denotes many different types of food that are usually served as an hors d’oeuvres. A “pupu platter” then is a selection of such foods served in a Hawaiian restaurant. The term “pupu platter” somehow became absorbed into American Chinese cuisine in the fifties, so one can order the same dish in a Chinese restaurant and get a plate of Chinese morsels.

54. La Scala presentation : ARIA
The La Scala Opera House opened in 1778. It was built on the site of the church of Santa Maria della Scala, which gave the theater its name, “Teatro alla Scala” in Italian.

55. Marcel Marceau, for one : MIME
Marcel Marceau was the most famous mime of all time, a native of Strasbourg in France. Marceau made a cameo appearance in Mel Brooks’s “Silent Movie”, playing himself. In the scene, Mel Brooks is asking Marceau to appear in his movie (a question asked silently of course, in subtitles), and Marceau turns to the camera and speaks the only word in the whole film, “Non!” (French for “No!”). The mime speaks! Brilliant …

57. Rapper who co-starred in “Ricochet” : ICE-T
Rapper Ice-T must be sick of having his name come up as an answer in crossword puzzles. Maybe he should have stuck to his real name, Tracy Marrow? Then again, maybe not …

“Ricochet” is a 1991 thriller film starring Denzel Washington and John Lithgow. It’s not that great …

60. ___ au vin : COQ
The French word “coq” actually means rooster, but a more tender bird is usually chosen for the classic French dish “coq au vin”. The most common wine used for the “vin” is burgundy, but sometimes another red wine is chosen, and you can also find on a menu “coq au Champagne” and “coq au Riesling”.