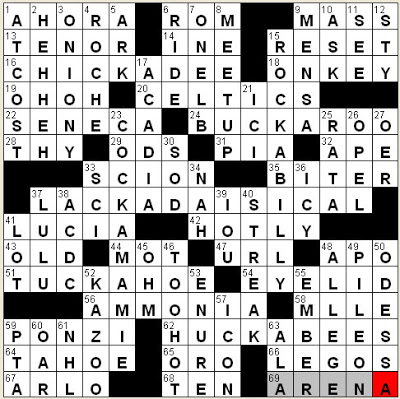 CROSSWORD SETTER: Paul Guttormsson
THEME: CKA … I find today’s theme hard to tie down, so I might be missing something. What I see is a “CKA” early in every theme answer, following the first syllable:

Today’s Wiki-est, Amazonian Googlies
Across
6. CD-___ : ROM
CD-ROM stands for “compact disc read only memory”. The name indicates that you can read information from the disc (like a standard music CD for example), but you cannot write to it. You can also buy a CD-RW, which stands for “compact disc – rewritable”,  with which you can read data and also write over it multiple times using a suitable CD drive.

9. Catholic service : MASS
The principal act of worship in the Roman Catholic tradition is the Mass. The term “Mass” comes from the Late Latin word “missa” meaning “dismissal”. This word is used at the end of the Latin Mass in “Ite, missa est” which translates literally as “Go, it is the dismissal”.

13. Plácido Domingo, for one : TENOR
Plácido Domingo is a Spanish tenor, from Madrid. Famously, Domingo was one of “The Three Tenors”, the performing trio that brought classical arias to the masses. The other two “Tenors” were fellow-Spaniard José Carreras and Italian Luciano Pavarotti.

14. Suffix with Benedict : -INE
A member of the Benedictine Order is a monk who follows the precepts laid down for religious life by St. Benedict of Nursia. The Benedictine “way” is a moderate path, considered neither zealous nor institutionally formulaic.

16. “My little ___” (W. C. Fields phrase) : CHICKADEE
“My Little Chickadee” was a catchphrase used by comic actor W. C. Fields. Fields first used it on film in the 1932 movie “If I Had a Million”. Years later in 1940, the phrase was used as the title of a film starring Fields opposite Mae West.

20. Boston N.B.A. team : CELTICS
The Boston Celtics NBA basketball team were founded just after WWII in 1946. The Celtics won eight league championships in a row from 1958 to 1966. That’s the longest consecutive championship winning streak of any professional sports team in North America.

22. Roman philosopher who originated the phrase “What fools these mortals be” : SENECA
Seneca the Younger was a tutor and advisor to the Emperor Nero of Ancient Rome. Although maybe innocent, Seneca was forced to commit suicide by Nero as it was alleged that Seneca participated in a plot to kill the emperor. To kill himself, Seneca cut into a number of veins in order to bleed to death.

31. Actress Zadora : PIA
Pia Zadora is an American actress and singer. Zadora’s most famous role was in the 1982 film “Butterfly” in which she worked with Orson Welles and Stacey Keach. The film was based on the novel “The Butterfly” by James M. Cain and deals with the difficult subject of father-daughter incest.

33. Toyota make : SCION
Scion is a brand name of automobile introduced for the North American market by Toyota. The brand is targeted at younger drivers.

51. New York City suburb near Yonkers : TUCKAHOE
Tuckahoe is a village located at the southern tip of Westchester County, New York. Tuckahoe sits just across the Bronx River from the city of Yonkers.

59. ___ scheme : PONZI
Charles Ponzi was born in Luigi, Italy in 1882 and arrived in the US in 1903, flat broke having gambled away all his money on the voyage to Boston. Ponzi devised a scheme to buy what were known as “international reply coupons” through friends in Italy, which he had them send to him in the US so that he could redeem them on this side of the Atlantic. As the value in the US was greater than that in Italy, he could make a handsome profit. This was in itself an “illegal” transaction, buying an asset in one market at a low price, then immediately selling it in another market at a higher price. But it’s what he did next that became known as a Ponzi Scheme. He couldn’t redeem his coupons quickly enough due to red tape so he approached other investors, initially friends, and had them give him cash so that he could buy more coupons in Italy. He promised the investors he would double their money, which they did initially. Many people wanted to get in on the scheme seeing that Ponzi was able to make new investors a profit and double the money of the original investors. Eventually, somebody did the math and word started to get out that the investment was risky, so the number of new investors started to fall. Without sufficient new investors Ponzi couldn’t double the money of his latest investors, and the whole scheme unraveled.

64. Sierra Nevada resort : TAHOE
Lake Tahoe is up in the Sierra Nevada mountains, right on the border between California and Nevada. Lake Tahoe is the largest alpine lake in the country. It’s also the second deepest lake, with only the beautiful Crater Lake in Oregon being deeper. Given its location, there are tall casinos that sit right on the shore on the Nevada side of the state line where gambling is legal.

65. Spanish doubloon material : ORO
The doubloon was a Spanish gold coin worth two escudos. The name comes from the Spanish “doblón” which means “double”.

66. Bricks that click : LEGOS
Lego is manufactured by Lego Group, a privately held company headquartered in Billund, Denmark. The company was founded by a carpenter called Ole Kirk Christiansen in 1934 and the now-famous plastic interlocking blocks were introduced in 1949. The blocks were originally sold under the name “Automatic Binding Bricks” but I think “Lego” is easier to remember! The name “Lego” comes from the Danish term “leg godt” meaning “play well”.

67. Janis’s spouse, in the comics : ARLO
The comic strip “Arlo and Janis” is written by Jimmy Johnson. It was first published in 1985. The lead characters are named after the musicians Arlo Guthrie and Janis Joplin.

69. TD Garden, for the 20-Across, e.g. : ARENA
TD Garden is a sports arena that was built in the 1990s to replace the aging Boston Garden as home for the Boston Celtics basketball team and the Boston Bruins hockey team.

Down
3. Like bialys and lyonnaise sauce : ONIONY
“Bialy” is a Yiddish name for a small onion roll, which takes its name from Bialystok, a city in Poland.

The adjective “lyonnaise”, as well as describing someone from the French city of Lyon, is used in French cuisine to mean “cooked with onions”.

9. Intelligence group? : MENSA
If you ever had to learn Latin as did I, “mensa” was probably taught to you in lesson one as it’s the word commonly used as an example of a first declension noun. Mensa means “table”. The Mensa organization, for folks with high IQs, was set up in Oxford, England back in 1946. To become a member you are required to have an IQ that is in the top 2% of the population.

15. Early Elvis Presley style : ROCKABILLY
Rockabilly is an early form of rock and roll music that emerged in the early fifties. “Rockabilly” is a portmanteau of “rock and roll” and “hillbilly”, as the style was rock and roll with country music influences. Country music was commonly referred to as hillbilly music in the forties and fifties.

17. First national park east of the Mississippi : ACADIA
Acadia National Park in Maine was created in 1919, although back then it was called Lafayette National Park in honor of the Marquis de Lafayette who famously supported the American Revolution. The park was renamed to Acadia in 1929.

21. Here, to Héloïse : ICI
“Vous êtes ici” are important words to know when navigating your way around Paris. They mean, “You are here”, and you’ll often see them on maps in the street.

26. G.M. German car : OPEL
Adam Opel founded his company in 1863, first making sewing machines in a cowshed. Commercial success brought new premises and a new product line in 1886, namely penny-farthing bicycles. Adam Opel died in 1895, leaving his two sons with a company that made more penny-farthings and sewing machines than any other company in the world. In 1899 the two sons partnered with a locksmith and started to make cars, but not very successfully. Two years later, the locksmith was dropped in favor of a licencing arrangement with a French car company. By 1914, Opel was the largest manufacturer of automobiles in Germany. My Dad had an Opel in the seventies, a station wagon (we’d say “estate car”) called an Opel Kadett.

27. Above, to Francis Scott Key : O’ER
“The Star Spangled Banner” was written by Francis Scott Key. The lyrics were written first as a poem by Key, inspired by witnessing the bombardment by the British of the American forces at Fort McHenry during the Battle of Baltimore in September 1814. The words were then set to the tune of a popular British drinking song penned by John Stafford Smith called “The Anacreontic Song”, with the Anacreontic Society being a men’s club in London.

38. “For Those About to Rock We Salute You” band : AC/DC
The Heavy Metal band known as AC/DC was formed by two brothers in Australia. The group is usually called “Acca Dacca” down under.

45. Electrical unit : OHM
The unit of electrical resistance is the ohm (with the symbol omega) named after Georg Simon Ohm, the German physicist. Ohm was the guy who established experimentally that the amount of current flowing through a circuit is directly proportional to the voltage applied (V=IR), a relationship that every school kid knows as Ohm’s Law.

50. Texas or Ukraine city : ODESSA
The city of Odessa, Texas has as its symbol the jack rabbit. This is because from the thirties through the seventies the city hosted a rodeo for roping rabbits. The Humane Society applied pressure and the city did away with the tradition in 1977.

The city of Odessa in Ukraine was founded relatively recently, in 1794 by Catherine the Great. The city was originally meant to be called Odessos after an ancient Greek city believed to have been located nearby. Catherine liked the way the locals pronounced the name as “Odessa”, so went with the less Greek-sounding name.

52. Instrument for the musically inept, maybe : KAZOO
The modern instrument we know today as the kazoo was invented by one Alabama Vest of Macon, Georgia in the 1800s. The kazoo first came to the public’s attention at the Georgia State Fair of 1852, when it was known as the “Down-South Submarine” (because of it’s shape, I would imagine).

53. Harden (to) : ENURE
“Enure” is a variant spelling of “inure”, meaning to harden oneself against the effects of, to accustom oneself to.

57. Gateway Arch, for St. Louis, e.g. : ICON
The Gateway Arch in St. Louis is the tallest monument in the United States. It was designed by Eero Saarinenen, with the help of structural engineer Hannskarl Bandel. They did their design work back in 1947, but construction wasn’t started until 1963. In 1980, a daredevil took it upon himself to parachute onto the top of the arch intending to further jump from the apex of the arch and parachute to the ground. He hit the arch alright, and slid all the way down one of the arches to his death. No comment …

61. Blackhawks’ org. : NHL
The Chicago Blackhawks are one of six teams still playing in the NHL who are founding members of the league. The other five teams are the Detroit Red Wings, Montreal Canadiens, Toronto Maple Leafs, Boston Bruins and New York Rangers.

63. Pie ___ mode : A LA
In French “à la mode” simply means “fashionable”. In America it has come to describe a way of serving pie, usually with ice cream, or as I recall from when I lived in Upstate New York, with cheese.